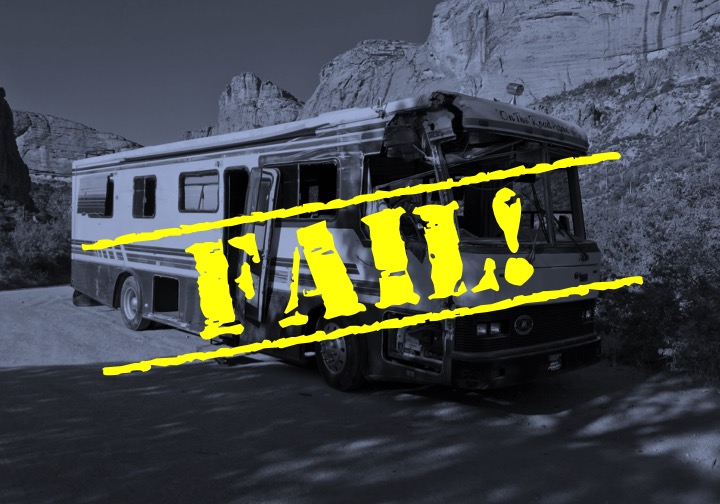 I know this is a truck camper website, but I just had to share what I found on the Apache Trail last weekend. I came across this severely damaged Class-A motorhome at the bottom of the Fish Creek Hill. It had obviously suffered this damage driving down the infamous hill. If you’ve never driven the Apache Trail, the 1,000-foot drop down Fish Creek Hill is both beautiful and dangerous. The narrow road hugs a steep cliff that features several sharp turns with rock outcrops and rock overhangs. Due to carelessness, many people have died going down this hill. As you can see from the photos, the damage to the motorhome is pretty substantial with a large, gaping hole in the passenger side front and with both windshields completely shattered and missing.

There’s no way to sugar coat this one. The person who attempted to drive down Fish Creek Hill in this motorhome was stupid. It’s an epic fail! The warning sign before the decent says, “Vehicles Over 40 feet Prohibited.” This motorhome isn’t quite 40 feet long, but you’d think the owner would’ve gotten the message and done more research before embarking on this trip. Especially, since there are numerous signs that warn of sharp, hairpin turns. Was the driver drunk? Or was it simply a lack of good judgement? Who knows? On the front of the motorhome are inscribed the words, “On the Road Again.” Ha! Maybe another road, but not on this one! The owner would’ve been better off staying on the interstates or parked at a cushy RV park rather than tackling this infamous hill in a 38-foot motorhome. I hope he or she had good insurance. 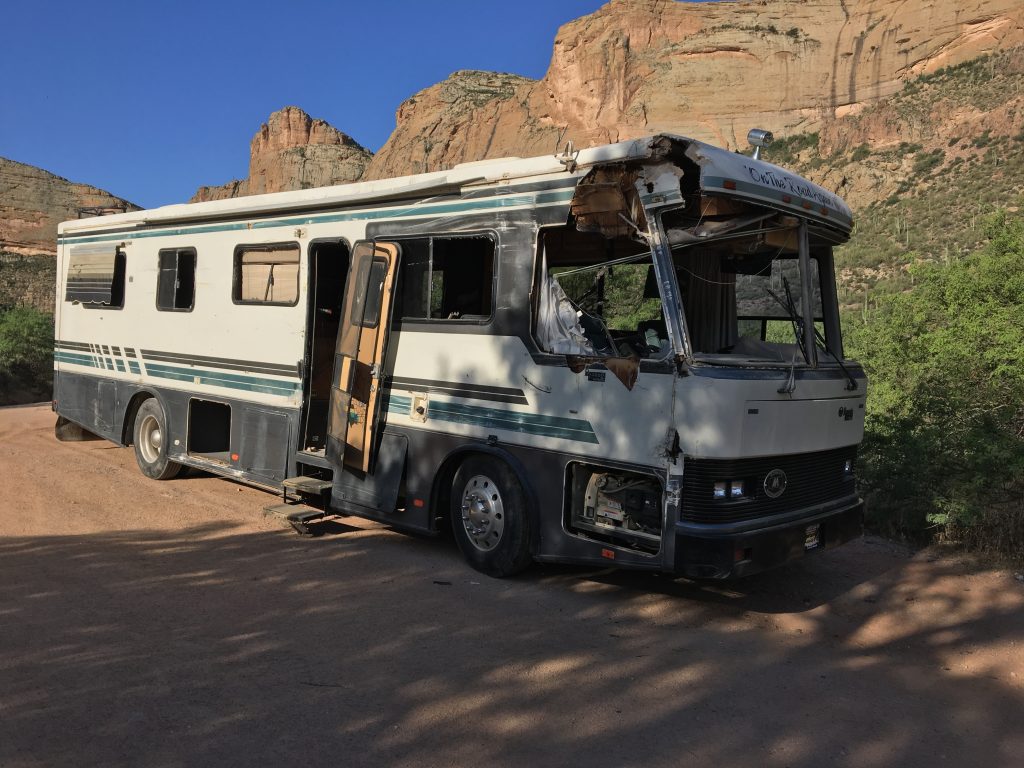 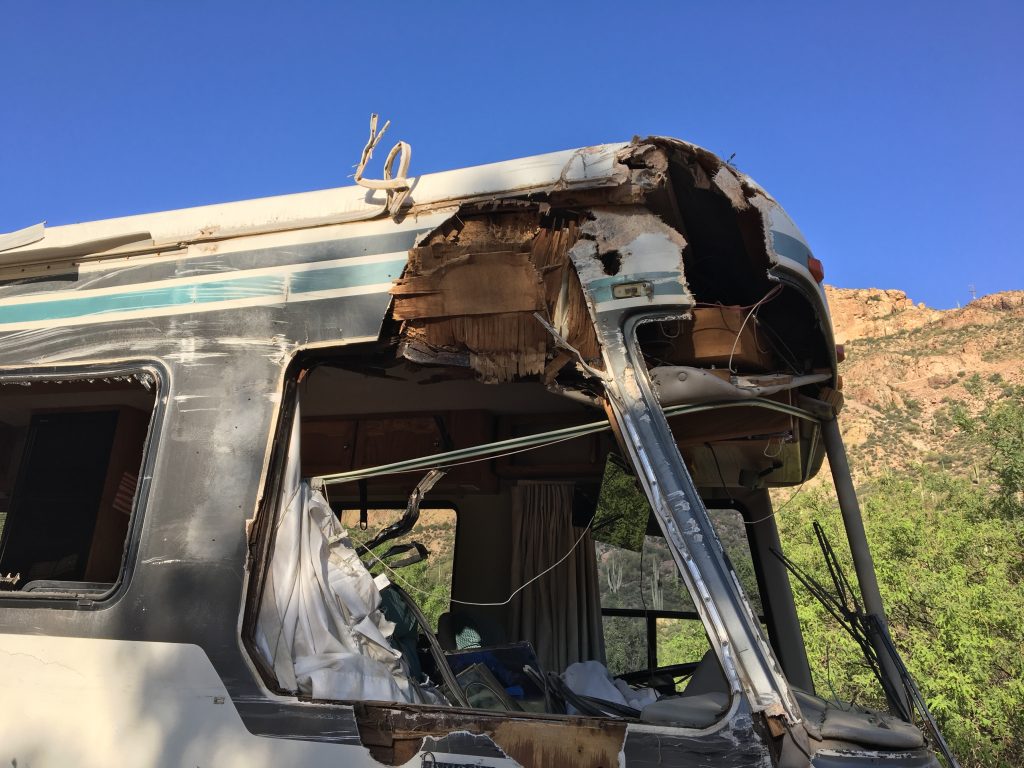 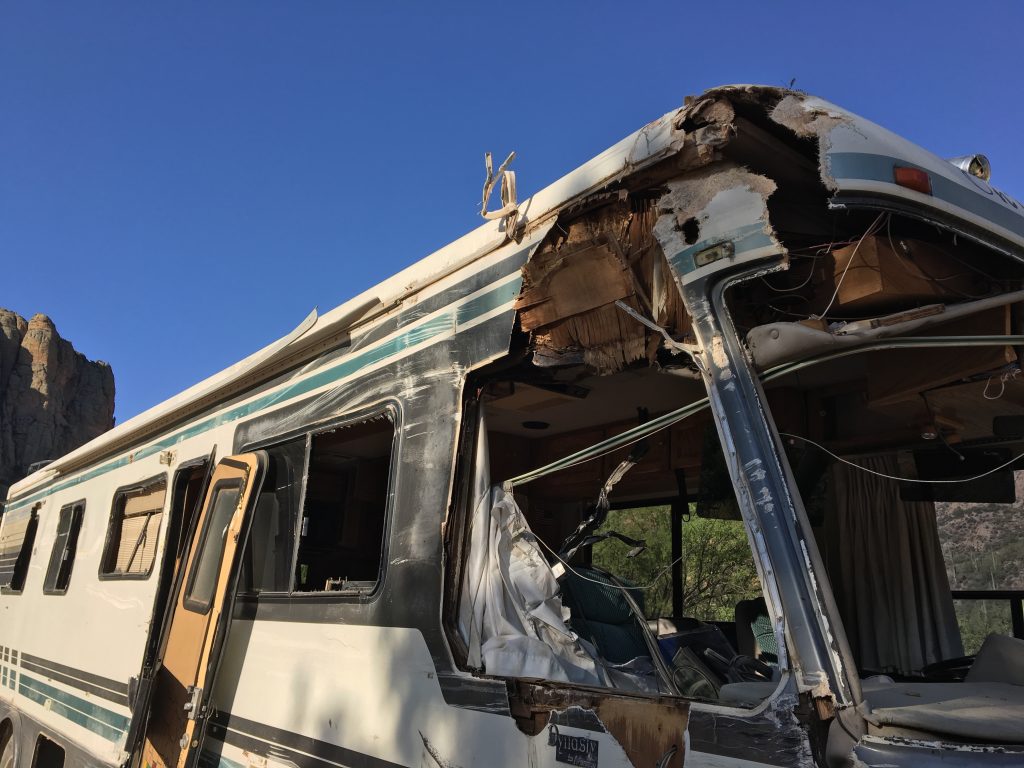 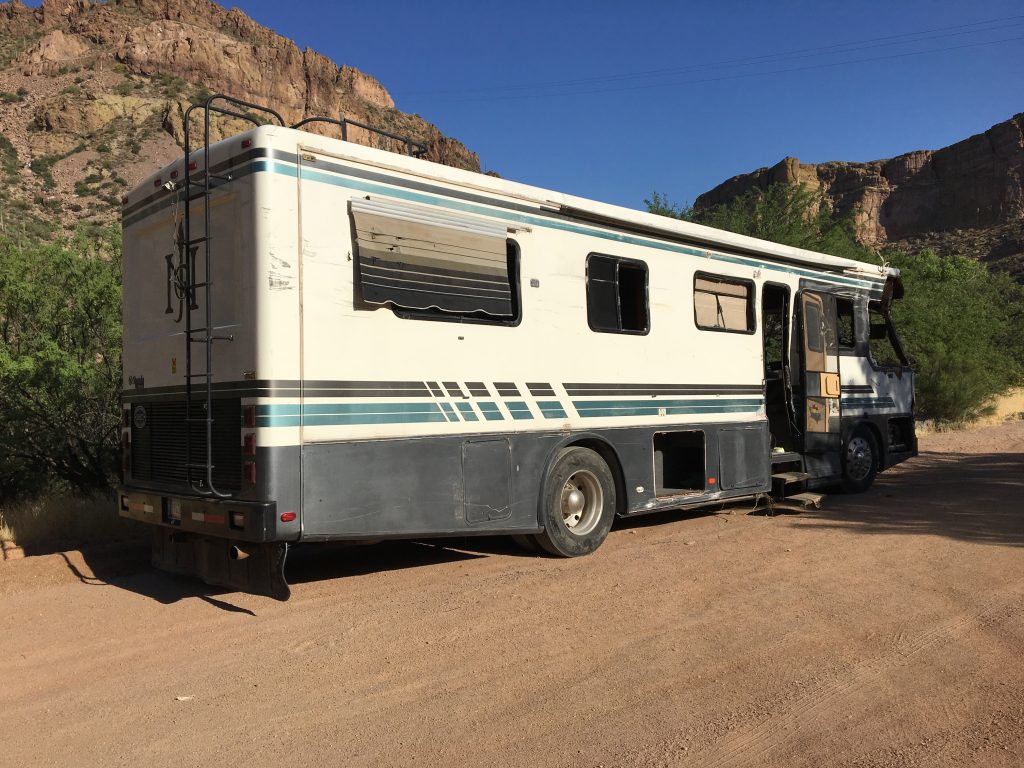 This incident illustrates the benefits of owning a truck camper. Safely tackling Fish Creek Hill is impossible for a large motorhome, or a pickup truck pulling a 26-foot travel trailer, or a high-profile fifth wheel, but not for a truck camper rig. The go-anywhere, do-anything ability of a truck camper is hard to beat. Some owners of large RV’s try to go where truck campers often go, but they often fail miserably like this poor sap.

I have no idea how long the abandoned hulk has been parked at the bottom of the hill, but it doesn’t look like its been there too long. The motorhome shows signs of vandalism. The main door has been ripped off the hinges and several hatches and windows are missing. The stench of the abandoned hunk is pretty bad, too, with area around the motorhome swarming with flies and bugs. I hope somebody hauls this nasty hulk away soon. It’s a real eye sore. For now it stands as a monument to man’s stupidity.

If the Apache Trail and Fish Creek Hill sound familiar it might be because of this video we released last year. It includes several shots of the Truck Camper Adventure Rig on Fish Creek Hill.