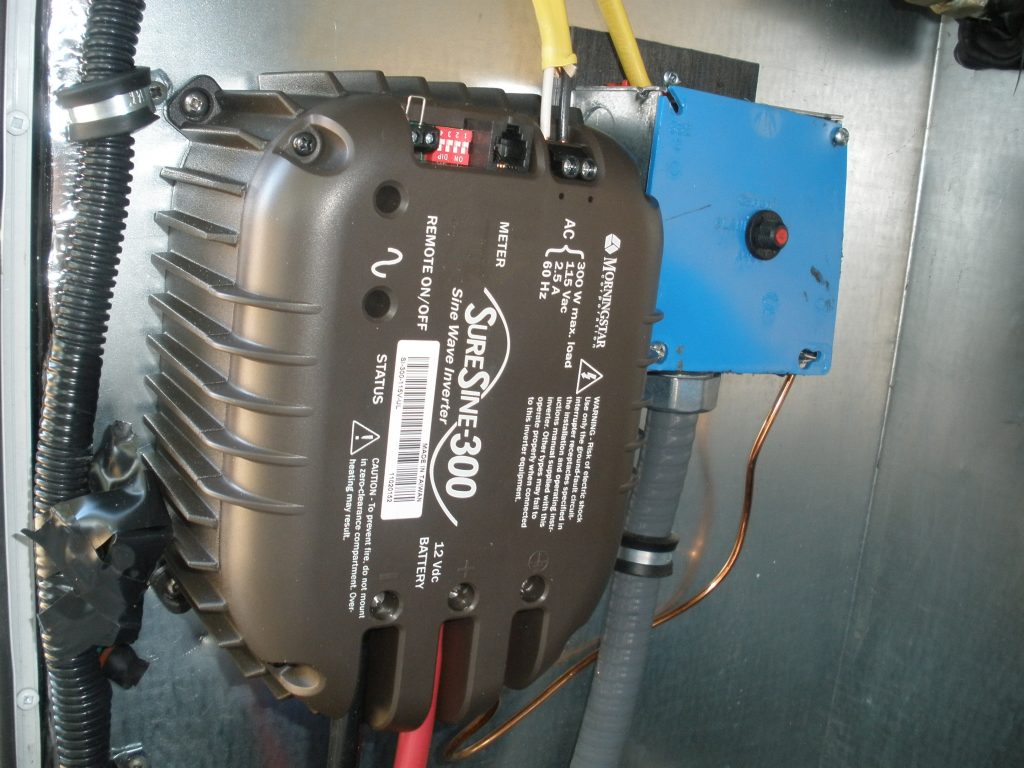 Inverters are a wonderful thing, especially for those who like to boondock. Inverters allow you to run 110 volt household devices, like TVs and DVD players, in your RV without actually being plugged into shore power or running your generator. Not only that, they create zero noise when in operation. Perfect for those who hate the noise and smell of generators, and for those times when running a generator isn’t advisable, like at a campground after hours.

There are basically two types of inverters you can choose from in today’s market: a modified sine wave and a pure sine wave. The latter type replicates what you see in your home and is the best wave form for running all types of electrical devices, including sensitive electronic devices. It’s true that some devices will run fine on a modified sine wave inverter, but some won’t. It’s better to be safe than sorry and go with a pure sine wave model from the start.

The total wattage of the inverter you need is determined by the loads or electrical devices you intend on using. We don’t need a lot of AC power when we boondock, just a TV, DVD player, satellite receiver, and laptops, so we didn’t need a high wattage unit. Nevertheless, we had several requirements for an inverter. First, we wanted a high quality unit that not only produced a pure sine wave, but also consumed very little power when in use (the latter was especially important to us because we have only two 6 volt, 200 amp hour batteries in our camper). We also wanted it to be lightweight and didn’t want one with a noisy, energy draining fan to keep it the unit cool. With these requirements in mind we chose one of the best engineered, pure sine wave inverters on the market, the Morningstar SureSine-300.

There are several things we really like about this 10 pound inverter. The unit’s design effectively dissipates heat so there is no need for the aforementioned cooling fan. The inverter consumes only 450 ma when in operation and a measly 25 ma in standby and will automatically activate when it detects a load greater than 8 watts. This means there is no need for an external on-off switch, though the design does give you that option if you want to use it. This inverter also has a 600 watt surge capability and a peak operating efficiency of 92 percent. Not too shabby.

Installing an inverter is pretty simple, though there are some things you need to keep in mind before you mount it. First, you’ll want to place the unit as close to the batteries as possible with the biggest battery cables possible to minimize current losses. Once you determine where you’re going to mount it then you’ll need to decide how you’ll get that AC power produced by your inverter to your camper. There are basically three ways you can do it: through hardwired AC outlets (these are often found on the unit itself), through a manual switch, or through a transfer relay. The latter two will distribute the inverter’s AC power to all of the 110 volt outlets in your RV. I decided to go with hardwired outlets and will explain why a little later.

There were basically four places where I could’ve mounted the inverter in our Wolf Creek camper, but of these only one was a clear winner–the generator compartment. Our camper came generator ready from the factory meaning it came with a large, dedicated compartment with all the necessary DC (4 gauge) and AC (10/2) wiring already installed. Since we had already decided not to install a generator in that compartment, it made perfect sense to install the inverter there. Plus the distance to the battery compartment is exactly four feet, the maximum distance you want for the DC wiring run.

With the location of the inverter now out of the way, I needed to decide where to place my new inverter-only 110 volt AC outlet. I was originally going to install two outlets with one up in the cabover area next to the TV and the other next to the cabover step, but the conduit going up to the cabover was completely filled with existing wires and there was no way it could fit more, especially 12/2 Romex. Moreover, only an Orangutang or contortionist could reach the conduit which was behind the kitchen sink and water heater, so I had to settle for a single inverter outlet (for now).

Although most of the wiring was already in place, I did need to make a few minor changes to the existing AC wiring. First, I disconnected the generator input wires terminating in the automatic transfer relay. Then I connected these wires using yellow-colored wire nuts to the yellow colored 12/2 Romex for the new inverter AC outlet (I used yellow to differentiate the inverter wiring from the OEM wiring). To further differentiate this new AC outlet from the existing white OEM AC outlets, I used the color gray. It looks pretty good, if I do say so myself, and won’t require any “Inverter Only” labeling.

You may be wondering why I didn’t leave the inverter’s AC wiring connected to the automatic transfer relay. I could have, but with the inverter only producing 300 watts/2.6 amps I didn’t want to have to manually shut off the 45 amp converter-charger circuit breaker (which also fed half of my 110 volt outlets) each time I wanted to use the inverter. Forgetting to do this the converter-charger would have tried to charge the batteries and would have overloaded the inverter thus shutting it down. I won’t have to worry about forgetting to shut anything down with the way my inverter is wired right now.

Morningstar gives you the option to monitor the inverter’s status via their (RM-1) Remote Meter, but with one of these meters already monitoring both my batteries and my solar charger (see pic of this meter below), I really didn’t see a need or advantage in installing another one. Especially in light of the fact that you cannot power the inverter off or on using one of these meters. You have to use another dedicated single pole switch to do this. If I had any complaint about this well-engineered inverter, that would be it, but that’s pretty minor.

I should mention that I did install a large 100 amp DC Fuse on the positive side. I mounted it next to the battery compartment on the inside of the camper. The fuse provides protection for the inverter in the event of a short circuit or other major DC failure. Going the extra mile is warranted not only to protect the wiring and camper from fire but also to prevent frying the inverter from a short circuit.

The Morningstar Suresine-300 is an outstanding, easy to install inverter. If you’re considering a low wattage inverter, I highly recommend this inverter for all of your AC power needs.

Truck Camper Adventure had the pleasure of getting a tour recently of the Host Campers factory in Bend, Oregon. The tour was provided courtesy of Randall Pozzi, Host Industries General Manager, who showed us everything. [read more]