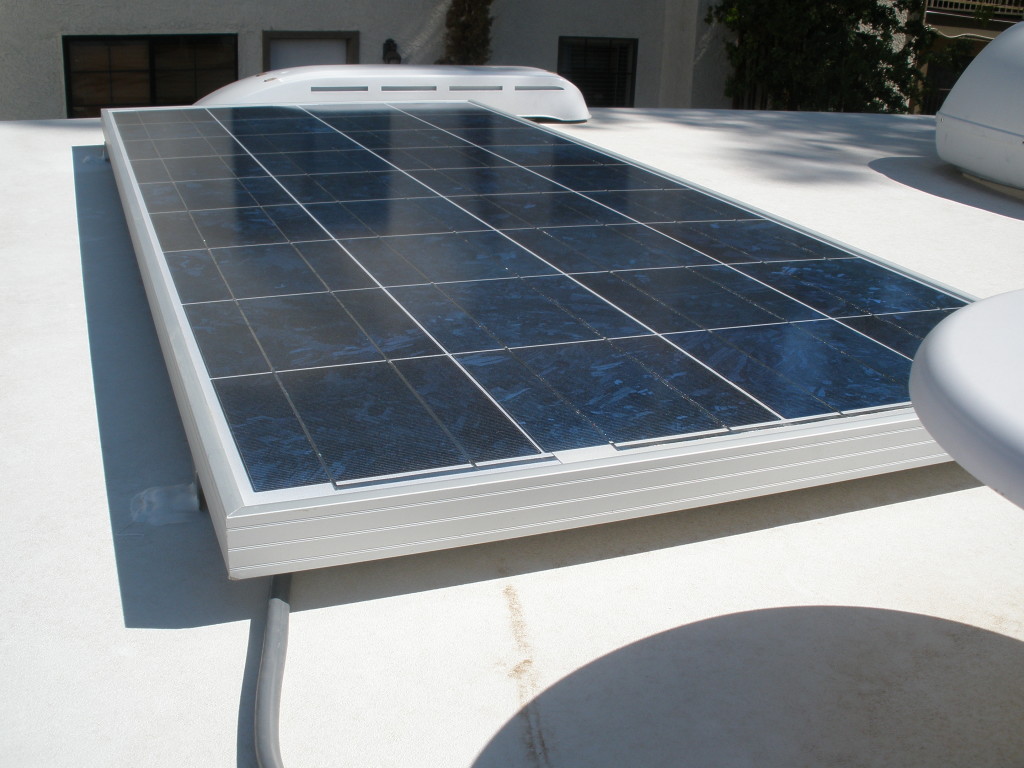 With all of the sun we get here in the southwestern U.S., it makes a lot of sense to go solar to maintain and recharge your RV’s batteries. Yet, one of the biggest complaints I hear about going solar from those who live around me is that it’s expensive. Yes, there are some initial start-up costs, but you can save big if you’re willing to shop for the best deals and install the solar system yourself. Indeed, you can buy a quality solar power starter kit consisting of two 100 watt solar panels, mounting hardware, and a PWM charge controller for only $277.

Fortunately my Wolf Creek 850 truck camper, like all RV’s built by Northwood Manufacturing, came pre-wired for solar, so this particular installation was relatively simple. The only real setback I encountered during the install was trying to locate the pre-staged, cut and bundled 10 gauge solar wiring (it took me a couple of hours to finally locate it). A service rep at Northwood Manufacturing said the bundle was supposed to be staged behind the “solar electric module wire location” sticker on the kitchen wall, but it wasn’t. Instead, it was located underneath the kitchen sink above the electrical relay box. The Wolf Creek campers were brand new at the time and probably accounts for the confusion I encountered with this factory representative.

The main effort of any solar installation will occur on the roof of your RV. On my Wolf Creek truck camper I expected to see a solar power combiner box of some kind with a couple bus bars inside to tie into the solar wiring. What I found instead was a single SAE two-way flat plug which most RV manufacturers are apparently using for their roof mount solar interface. At this time I installed only one solar panel, so I used this existing interface (I had to buy a two-way, 10 gauge plug to connect to it) and will change it out later for a more robust junction box when it comes time to install additional solar panels.

The solar power system I installed consists of a single Solar Cynergy 120 watt Polycrystalline solar panel ($225) and a Morningstar SunSaver Duo PWM Charge Controller with Remote Meter ($145). I used simple aluminum Z-brackets ($8.00) to mount the panel on the roof rather than going with tilting mounts. Like I said earlier, Northwood Manufacturing uses 10 gauge wire for their pre-wire solar packages. My camper only has 4 foot runs from the roof to the charge controller and the charge controller to the batteries, so 10 gauge wiring works fine in this instance (check out Blue Sea Systems Circuit Wizard if you have any question about the size of wire to use). I did, however, replace the OEM in-line 30 amp fuse with a 30 amp circuit breaker not only because it was in a difficult to reach location, but also because it was spliced to the battery charge line using smaller 12 gauge wire. Not good.

When placing your solar panels on the roof, you’ll want to avoid shading from any large item on the roof like the air conditioning shroud and the TV antenna. Unfortunately, this is sometimes difficult to achieve, especially if you are mounting your panels on a small roof like those found on a truck camper. I placed my solar panel with future expansion in mind (future panels to be placed in the front flanking either side of the front vent). I used a combination of VHB tape and a single screw to mount each bracket to the roof. Each bracket was then topped off with a generous amount of Dicor to provide a watertight seal. The first pic below shows the termination box connections for the solar panel.

Northwood Manufacturing dedicated a location on the front kitchen wall for the charge controller monitor. This is the same wall where you’ll find the rest of the camper’s switches and monitors and is the same wall found on Arctic Fox truck campers. There are clusters of wires behind this wall so some caution is needed before drilling and cutting on the wall panel. I mounted the charge controller underneath the kitchen sink where Northwood Manufacturing had staged the aforementioned cut and bundled solar wiring. The factory had already run a RJ-12 6-pin telephone cable between the two locations which was a very pleasant surprise. I can’t tell you how much I appreciated this, because running a new wire from underneath the sink to the wall above is no small feat. You’d have to be a contortionist to get your arm and hand up in there.

In order to capture all that energy being created by your solar panels, you’ll want to ensure you have at least two deep cycle batteries hooked up to your charge controller. Unfortunately, the battery compartment in my truck camper isn’t very large and can house only two Group 24 deep cycle batteries (6 volt AGM batteries will fit, however, if you lay them on their side). The camper came with one new Interstate battery when I bought it, so I had to buy another one to complete the battery bank. It really pays to shop around when it comes to batteries. This Interstate marine hybrid battery set me back only $69 (plus a $9 core charge) at Costco. An auto parts store in Payson, AZ was asking $110 (plus a $20 core charge) for this exact same battery. Yikes!! Anyway, these batteries are only temporary and will get me by for a few months until I can afford to buy a pair of Lifeline 6 volt AGM deep cycle batteries (click here to learn more about this upgrade).

Installing a solar charging system in your RV is an enjoyable and very worthwhile project with numerous benefits. If you understand the basics of 12 volt electrical systems, you can easily do it. The peace and quiet it provides when you boondock and the money it saves in maintenance and fuel is well worth the initial cost and effort. Yes, you’ll still need a generator to run high amperage items like the air conditioner and microwave (unless your RV is outfitted with an inverter and a large bank of deep cycle batteries), but reducing the amount of time you need to run a generator is always a big plus when you’re camping off-the-grid.

Phase II of my solar power installation can be found here.

Like Loading...
About Mello Mike 731 Articles
Mello Mike is an Arizona native, author, and the founder of Truck Camper Adventure. He's been RV'ing since 2002, is a certified RVIA Level 1 RV Technician, and has restored several Airstream travel trailers. A communications expert and licensed ham radio operator, he retired from the U.S. Navy in 2004 as a CWO3 after 24 years, worked in project management, and now runs Truck Camper Adventure full-time. He also does some RV consulting, repairs, and inspections on the side. He currently rolls in a 4WD Ram 3500 outfitted with a SherpTek truck bed with a Bundutec Roadrunner mounted on top. - KK7TCA
Website Instagram YouTube

Interested in equipping your truck camper rig with a portable solar panel, but lack physical access to the batteries mounted inside your camper? Then you’ll want to take a look at this modification that provides [read more]