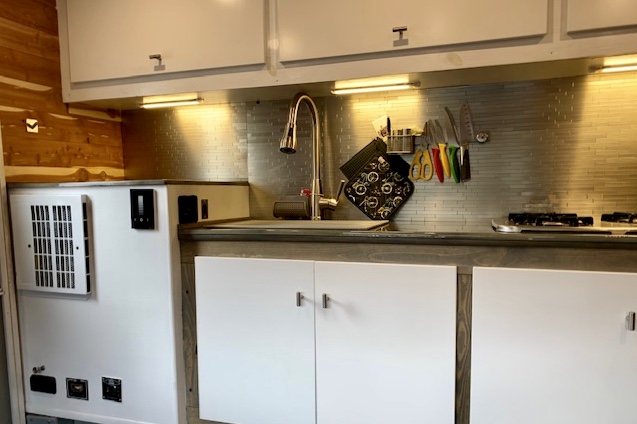 The Six-Pac truck camper—a terrific, little camper for sure. Unfortunately, the last Six-Pac was made in 2009 when the California-based company decided to close its doors for good. Due to its rugged construction, you can still find a good Six-Pac for sale in your local classifieds. What made the Six-Pac camper so good? The quality, all-wood construction, consisting of kiln Douglass Fur, mahogany, and plywood. The fact that the camper was generally small and lightweight also helped with its appeal.

According to NADA, only three floor plans were made by Six-Pac: the T100S, for mid-size trucks; the 650, for full-size trucks like the Ford F-150; and the 850, for full-size, long-bed trucks. The company produced three trim levels of campers: S-standard, D-deluxe, and U-utility, the letter of which was affixed to each model number. Without a doubt, the Six-Pac 650 was the company’s most popular model. As a matter of fact, the popular Lance 650, now being produced, is actually a close copy of the old Six-Pac D650. The Lance 650 is now one of Lance’s most popular truck campers.

In 2019, Taylor Martinez, a nursing student at the University of Colorado, was able to score on a 2006 U850 for a great price. How was he able to find it? Like most people shopping for a used camper, through Craigslist or another a popular, online classified called Offer Up.

“I have an immense addiction to Craigslist,” Taylor said. “I have a very committed relationship with scrolling through Craigslist and finding deals. My wife and I knew we wanted a truck bed camper mostly because we had the means to carry it with our Toyota Tundra. The truck bed camper was the most financially sound decision for us as well as the most versatile, allowing us to retain the functionality of our truck. After months of searching, I found the perfect camper out in California. In most circumstances, I likely would have not made the trip, but at $3,200, I couldn’t resist.” 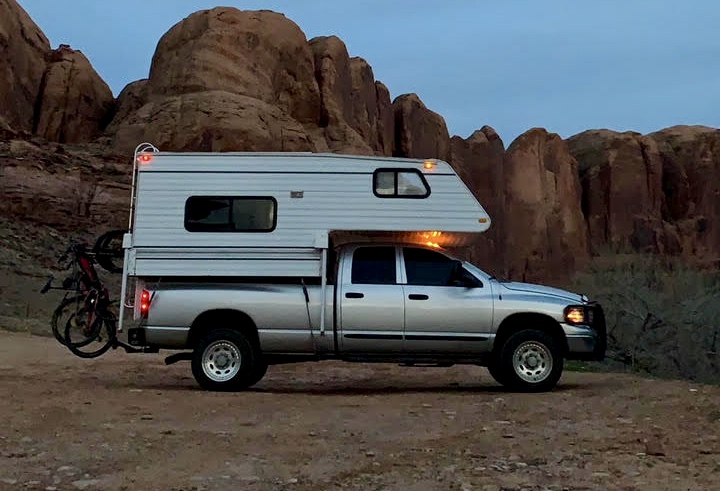 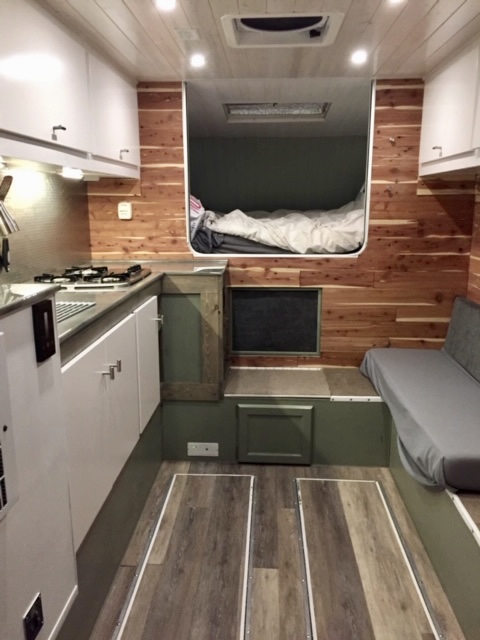 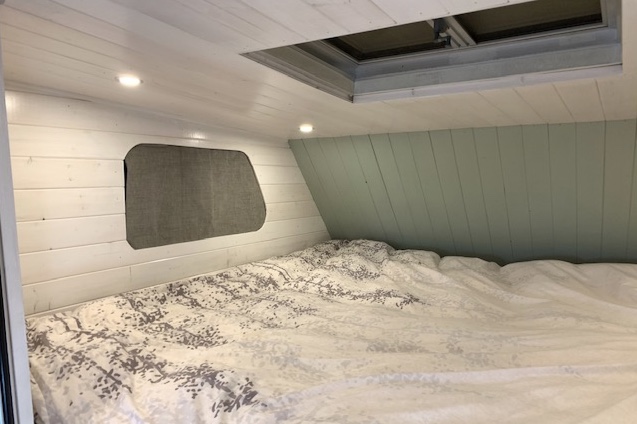 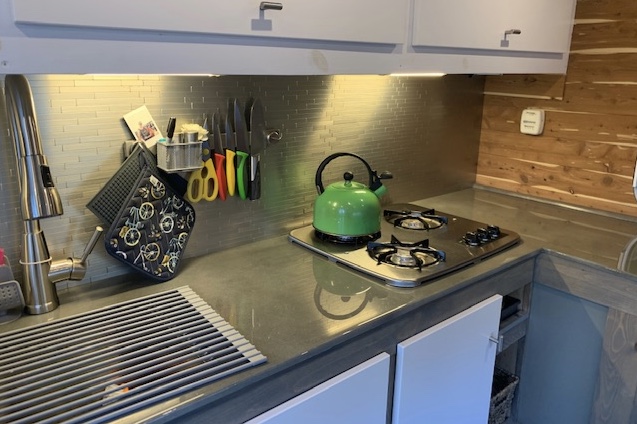 Why buy a used truck camper, like a Six-Pac, rather than going brand new? Cost is obviously the big one. A brand-new, wood-framed truck camper can set you back anywhere between $12,000 to $30,000. A good, used camper can be found for a lot less. Not only that, old campers are just plain retro and cool. Getting one that’s in good condition, however, can be difficult. That’s why we recommend buying a camper that’s either been stored undercover or stored outside in a dry and arid climate. Unfortunately, Alaskans and Avions, are becoming increasingly difficult to find, but not an old Six-Pac camper—these California classics are plentiful. We counted no fewer than five on Craigslist at the time we wrote this article. All were being sold in California.

“This was the perfect camper in the sense it was a very basic model with a very basic and utilitarian inside, which allowed us to build it out in the way we wanted,” he said. “The truck camper came equipped with a Suburban furnace and that was really all that came with it amenity wise. My wife and I really wanted something that we could take backcountry snowboarding and mountain biking with all our essentials in one place as well as a comfortable bed to sleep in. The quality, size and the weight really appealed to us. So far its held up nicely.”

Fortunately, the exterior of the camper was in excellent condition. This allowed Taylor and his wife, Jessie, to devote most of their time to the Six-Pac’s interior, which was in dire need of an update. This involved everything from lining the interior walls 3/4-inch insulating foam, covering the insulated walls with either cedar or white-washed pine, and installing new wood cabinets. The couple also installed a beautiful, stone-coat countertop, a stainless steel sink, and modern-looking backsplash, a three-burner cooktop, a slide-out refrigerator, a Fan-Tastic Vent. Taylor didn’t hold back on anything. Premium materials were used for everything to give the camper a quality and solid look. The furnace and the shell of the camper are the only things that remain original.

“We wanted it to feel like home, nice and cozy,” he said. “Most campers seem to be stuck in the mid-1990s. Some new companies like Cirrus look more modern, but the vast majority of new campers seem to be stuck in the 90s. We wanted to make this camper into something that we had never seen before, a rustic feel with the wood, but also more modern with the stainless steel sink and backsplash and stone countertops. We think it turned out nicely.” 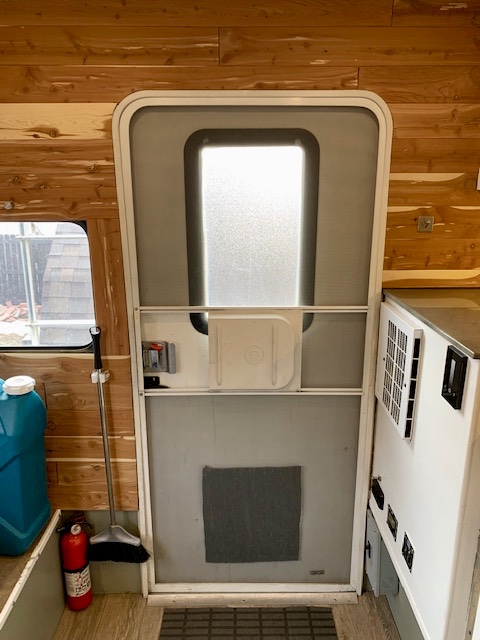 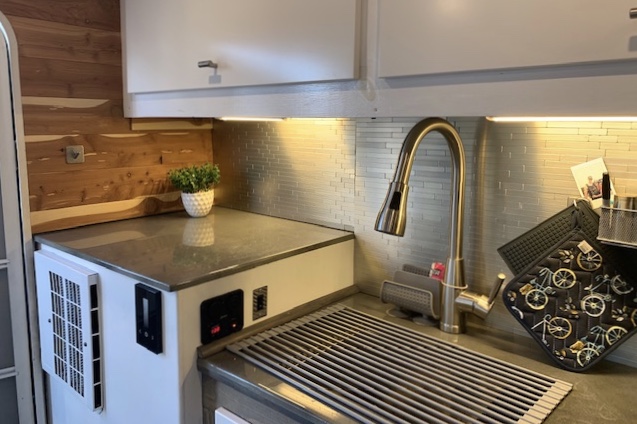 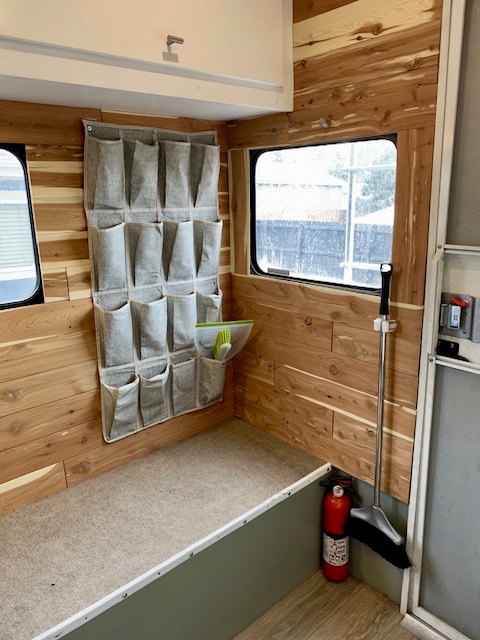 What was the most challenging part of the modernization? “The biggest problem with the build was working with the super-thin cedar tongue and groove board we used. We had to be very gentle cutting and attaching it as it broke or cracked frequently. Once attached it was solid, but the process of getting it there was quite frustrating at times,” he said.

Taylor and his wife also wanted a camper that they could use off-grid. Public land is plentiful in Colorado and Utah where they spend most of their free time, so boondocking without relying on hookups was important for the active couple. As a result, Taylor equipped the camper with a 200 amp hour Renogy AGM battery and a Renogy 200 watt solar power system outfitted with a Renogy MPPT charge controller.

“This camper has never seen a campsite with hookups,” he said. “My wife and I are avid mountain bike riders and climbers and love to get out to Colorado BLM land, so we never had any intentions of it being a plugin style of camper. We built it with the intent of being able to go it out into the forest and be there as long we wanted. We never wanted power to be an issue, which is why we overbuilt the electrical system.”

Like their old Six-Pac, the couple was able to score on a great truck to haul the camper. “We wanted an actual 8-foot bed to fit the camper, so we sold our Tundra and bought a 2004 Dodge Ram with the 5.9L Cummins diesel with 133k miles from a single owner out in Montana. The truck was extremely well-cared for with every imaginable preventable maintenance item addressed from head studs, to a FASS fuel filter, and water separator unit, FS-2500 secondary oil filtration unit as well as an ATS exhaust header. Additional modifications to the truck included a gear vendor transmission, cold-air intake, expanded differential reservoirs, BD steering stabilizer, AFE filter, Banks High-Ram intake, upgraded turbo, two 20-gallon saddle diesel tanks (allows us to have almost 80 gallons of fuel onboard), an Edge tuning system and I am sure others I am forgetting. We are under the GVRW of the truck. We average about 13-14 miles per gallon with the camper on.” 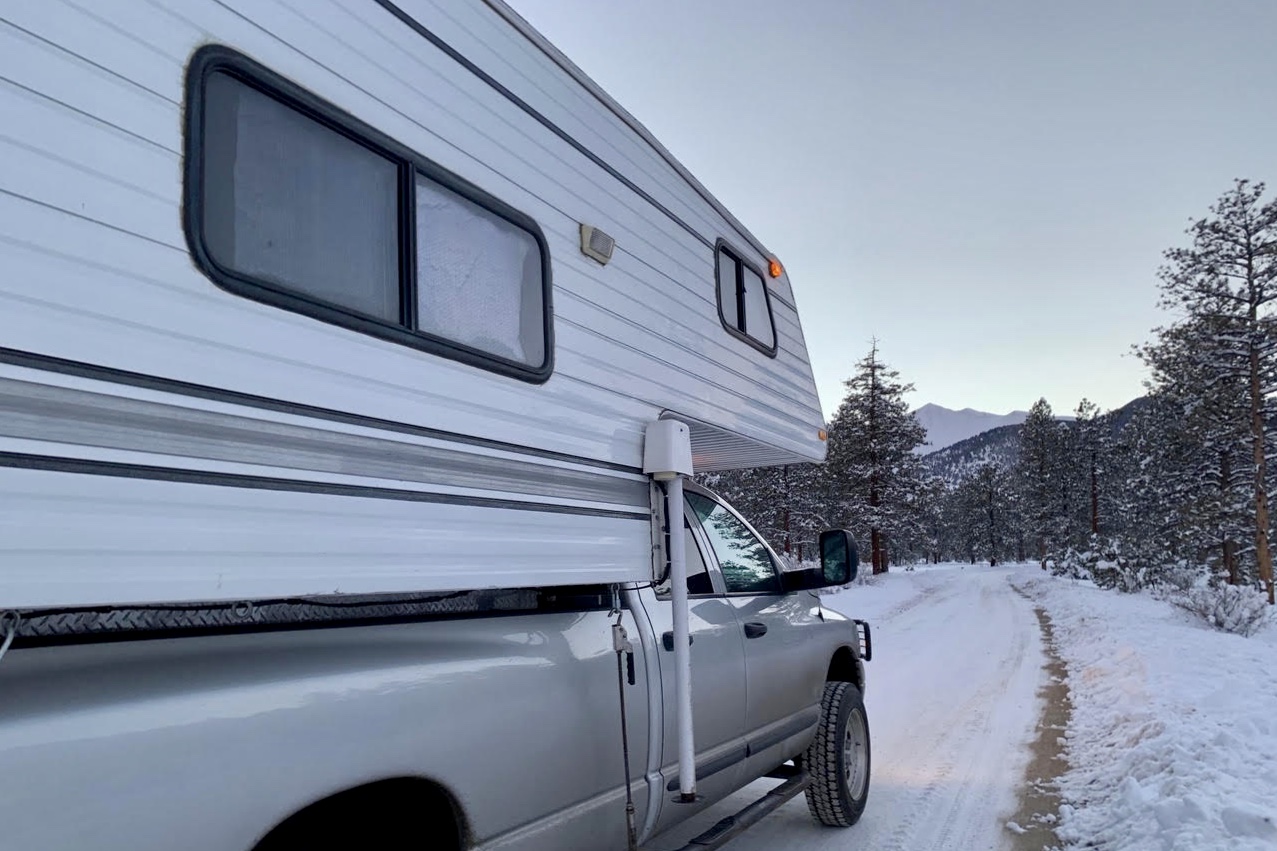 “We do quite a bit of forest service roads, but nothing overly crazy with the camper on. We really enjoy going down to the San Juans in Colorado and camping around Silverton and Telluride area. We also like to take advantage of BLM land and make our way out to Moab where we ride bikes quite frequently and where we find ourselves doing some off-camber rock and sand mixed surface driving with the camper.”

So what were the big takeaways with this project? What did they learn restoring a 14-year-old, wood-framed camper with a minimalist interior?

“We learned a lot of things. It was fun to have this blank canvas on the camper and take it what ever direction we wanted. We learned a ton about carpentry in general and learning some new skills with the stonecoat countertop and working with epoxy and pouring that and the frustrations of working with wood. It was a lot of fun. We’re already looking forward to our next project,” Taylor said.

Truck Camper Adventure is proud to present another truck camper review written by a guest author. In this insightful and informative piece, Michael Harris provides us with his thoughts on the 2015 ALP Adventurer 80RB, [read more]

Vote Now for the Winner of the 2016 TCA Photo Contest

Truck Camper Adventure has received a total of 63 photo entries for the 2016 Off-Road Truck Camper Photo Contest and it’s time to vote! You may vote only once and you may vote for only [read more]