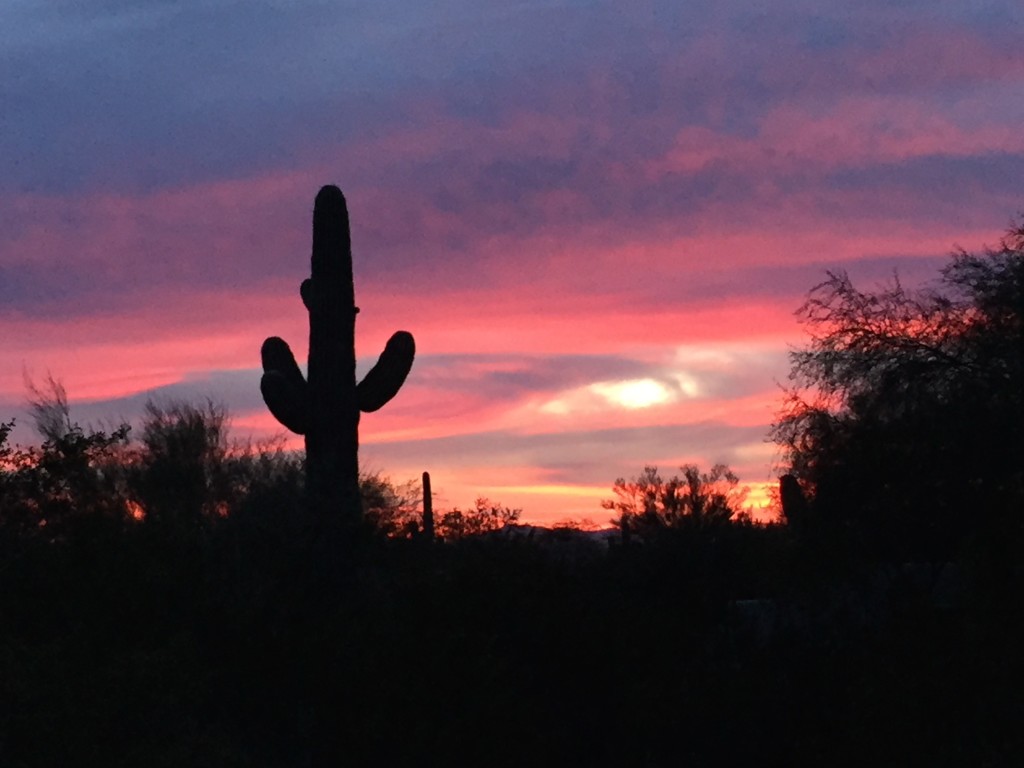 Known as the “Sentinel of the Desert,” the magnificent Saguaro (pronounced Sah-wah-roh) is perhaps the most prominent icon of the American West and the great state of Arizona. If you’ve ever visited southern Arizona before, then you, no doubt, have seen hundreds of thousands of these impressive looking Cacti growing wild in the desert.

In the United States, the Saguaro is found almost exclusively in the Sonoran Desert of Arizona, though small numbers exist in California along the Arizona-California border. The plant is limited by elevation and can generally be found growing from sea level to about 4,000 feet in elevation. Any Saguaros found above that elevation are usually located on south facing slopes where the temperatures are much warmer.

With distinctive, tree-like columns, the Saguaro is the largest cactus found in the United States. It’s capable of achieving heights up to 60 feet and can weigh as much as 6 tons fully hydrated. At around 50-70 years, most Saguaros develop arms or branches, some producing as many as 25, although some never develop arms at all. In areas where there is very little precipitation, it may take 100 years before an arm appears.

The green skin of the Saguaro is very tough and possesses a waxy appearance. The skin is also pleated and sports protective spines clustered down the cactus’ entire length. These pleats actually expand in the rainy season to allow the flesh of the cactus to soak up the water. Conversely, when the desert is dry, the pleats contract to use up this stored water. Since the majority of the Saguaro is made up of water, the plant is supported by a massive circular skeleton of inter-connected, wood-like ribs. These ribs are very decorative and highly sought after by landscapers once the plant dies and the flesh fully decays.

At about 35 years of age, the Saguaro produces beautiful white flowers (the state flower of Arizona) in late spring each year, which are pollinated by nectar feeding bats, birds, and insects. Once pollinated, they develop into a red delicious fruit in summer, each bearing about 2000 small black seeds. These seeds are propagated by bats and birds which eat the fruit then defaecate the tiny seedlings onto the ground. Only a few of these seeds actually germinate and grow to maturity. Baby Saguaros require the protective shade from what are called “nesting trees.” These include not only trees, but also large bushes.

Saguaros are very slow growing. With adequate water, they typically grow about an inch a year. The average lifespan is believed to be between 150-175 years, though some can live as long as 200 years. It does require moisture, but not much, with the late summer monsoons providing most of its moisture needs. The Saguaro’s root system is very shallow. Although the tap root extends down 2 feet, most of the its roots are typically only 4-6 inches deep and radiate as far as the cactus is tall. For this reason transplanted Saguaros have to be propped up with 2x4s until the root system takes hold.

Saguaros provide a natural habitat for several species of animals. The most conspicuous of these are the Gila Woodpecker and Gilden Flicker, both which create the large nesting holes seen in so many Sagauros. Each year the the stout beaks of the woodpecker and flicker drill out new nesting holes since the old ones are usually taken over by insects, lizards, and, occasionally, the pygmy owl. Large twig nests from the Harris Hawk and Red-Tailed Hawk can also be sometimes seen perched in the upper branches of Saguaros.

Although the Saguaro isn’t currently listed as threatened or endangered, the state of Arizona has strict regulations about the harvesting, collection or destruction of this species. Stiff fines and penalties– $10,000 per plant– will be imposed if you are ever caught illegally removing or relocating a Saguaro without a permit even if it’s on your property. This even applies to property owners who want to relocate a cactus from one end of their property to the other.

One look at a map of Big Wash Road and you might just dismiss the drive as too rough for a truck camper. Located in the Cerbat Mountains of northwestern Arizona, the 4×4 drive features [read more]