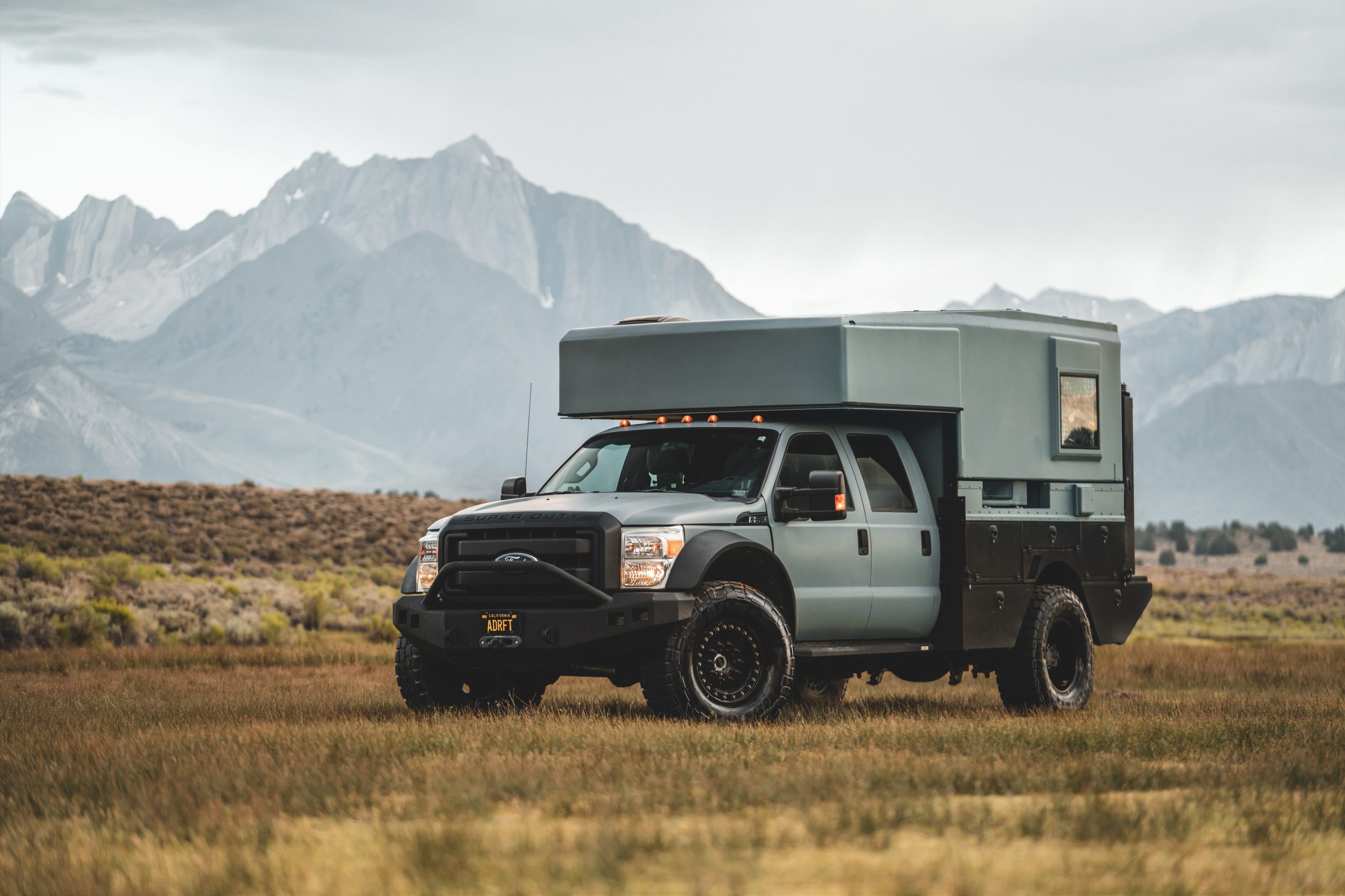 One of the things we love about this hobby is getting away. There’s no better way to do that than doing it in a truck camper. Another thing we love is that you can build a rig cheap or go all out, spending hundreds of thousands of dollars. Some prefer to buy from the factory; others prefer to build the rig themselves. This particular truck camper rig, built by Dr. Scott Mayfield, a physician based out of Santa Barbara, California, is one such rig. Affectionately called Adrift, this rig provides all the proof you need that you don’t need to spend $500,000 on an EarthRoamer to have a great looking, custom truck camper rig. To learn more about how he designed and built it, Scott was kind of enough to answer a few questions.

TCA: Thanks, Scott, for taking the time to talk with us. We love your rig. What inspired you to build it? Was it simply to save money or was it just the challenge?

Scott Mayfield: I’m pretty tall (6-foot 6-inches). When we started dreaming of a PanAm trip we couldn’t find a rig that I fit comfortably in, so we decided to build it ourselves.

TCA: Let’s start with the truck? What is the make and model and what are the truck’s specs?

TCA: What upgrades, if any, were made to the truck’s suspension to carry your camper?

Scott Mayfield: We did new Carli coils upfront, and a custom Deaver pack in the rear. We have King hydraulic bumps up front, 2.5-inch King shocks up front, and 3-inch Kings in the rear. I also installed a Firestone air bag kit in the rear as the weight of the camper varies quite a bit depending on how much water we have left.

TCA: What other upgrades were made to the truck?

Scott Mayfield: I installed a new auxiliary alternator, and a new front bumper. I also made custom fender flares after I bought a set that fell apart.

TCA: Are the engine and transmission stock?

Scott Mayfield: Other than a very modest tune to open up the shift points, yes. 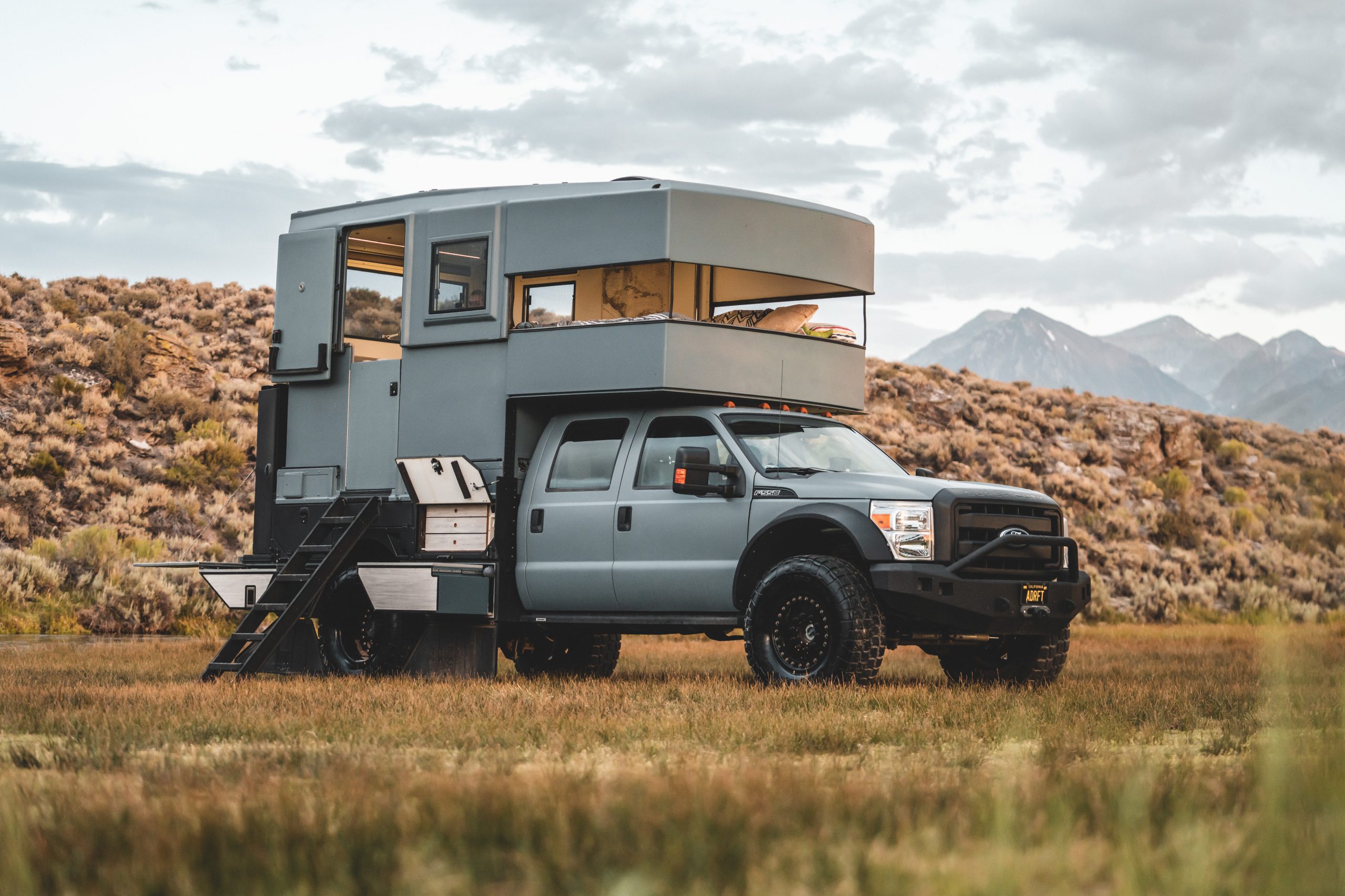 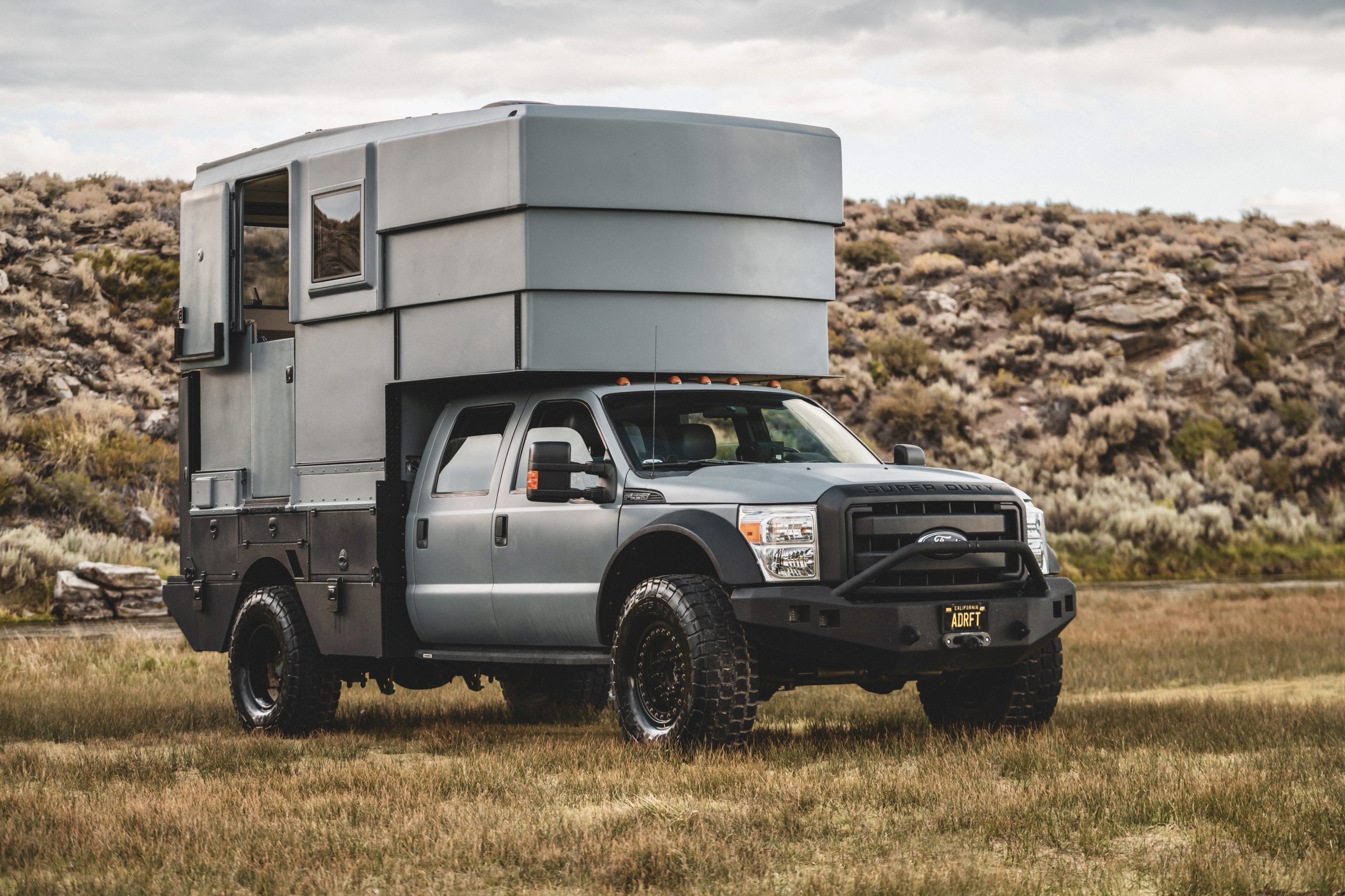 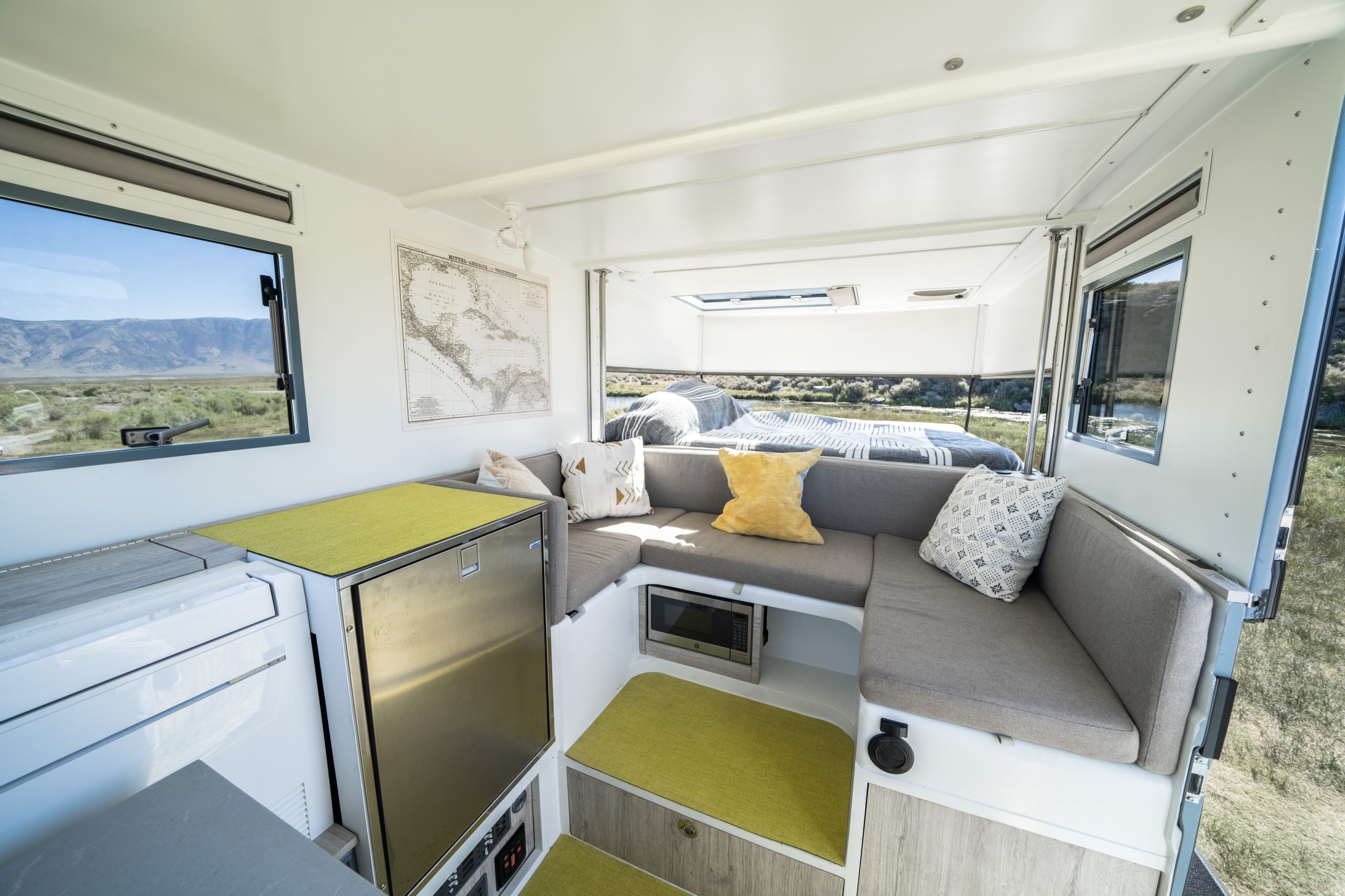 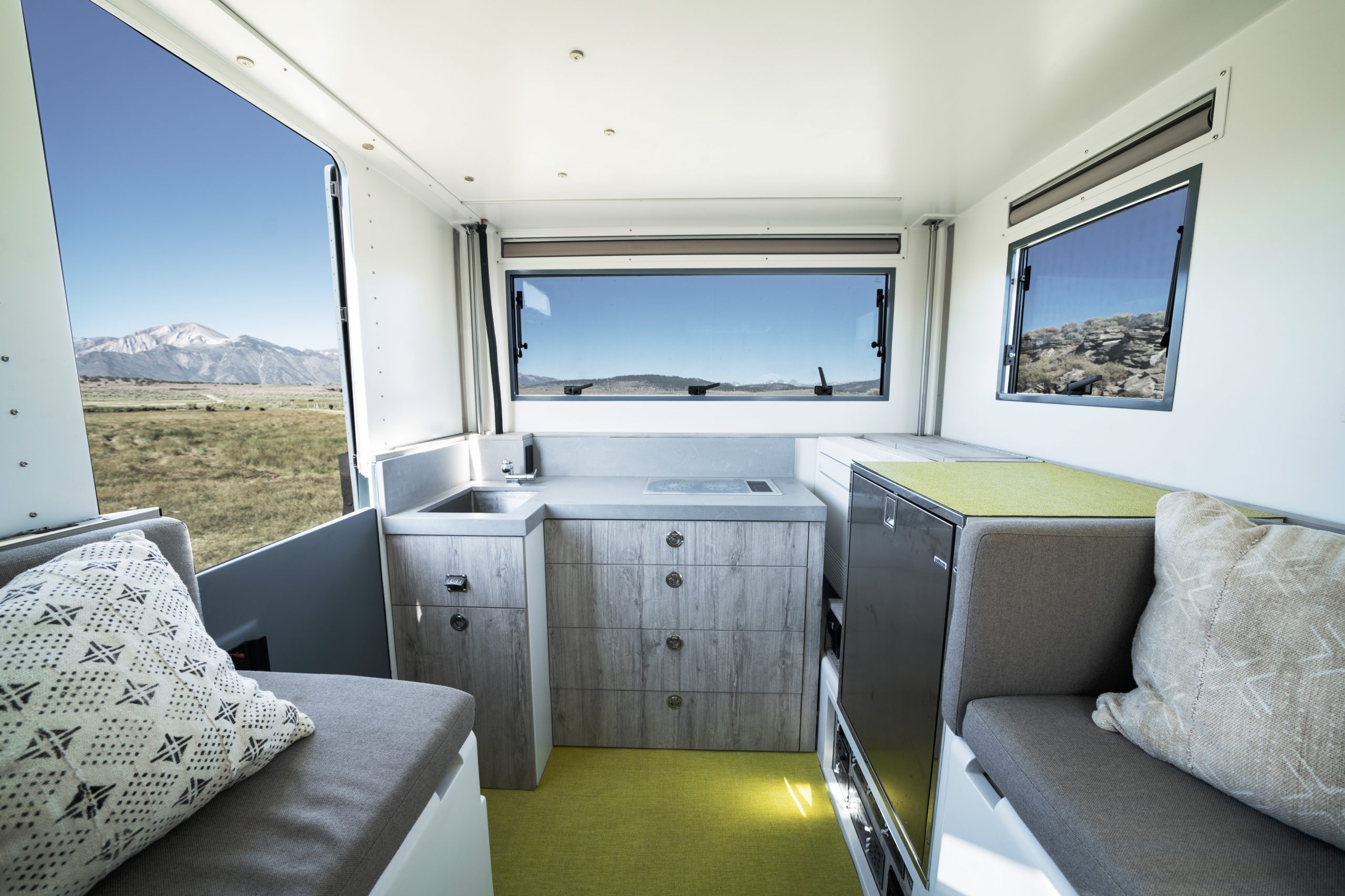 TCA: Can you tell us more about the wheels and tires?

Scott Mayfield: The wheels are a Hutchinson beadlock wheel with custom centers. The tires are a 41-inch Michelin G275MSA.

TCA: Let’s now talk about your camper. How did you design it?

Scott Mayfield: I started the process fairly analog, but a little ways into it, I decided to learn CAD modeling and did the rest of the build on the computer first and then put it together by hand.

TCA: How is the camper constructed? How long did it take you to build it?

Scott Mayfield: Everything blue on the camper is custom hand laid fiberglass composite panels, and everything black is steel or aluminum. It took a few years of consistent work. The shell construction took a few years by itself. Towards the end I switched to vacuum bagging, but the rest of it was all built using custom one-off molds.

TCA: How much does the camper weigh? What is the total weight with the truck?

Scott Mayfield: Total weight of camper and truck is around 15,000 pounds.

TCA: What was the total cost to build it?

Scott Mayfield: More than I am comfortable admitting. Suffice it to say you could buy a new EarthRoamer for a lot more.

TCA: Is the roof constructed the same exact way?

Scott Mayfield: The entire shell of the camper is monocoque construction. All fiberglass composite panel. The roof is constructed of the same method, but there is a full length safari roof that has pockets for surfboards underneath the solar panels.

TCA: The floorplan looks very functional? Can you tell us about some of its features?

Scott Mayfield: There is king bed in the cabover. The dinette area is very comfortable. The toilet is on a powered slideout in the entry way. There is a full shower that attaches to the ceiling  via magnets.

TCA: Is the camper equipped with a cassette toilet or a standard flush toilet? Does it have an indoor shower?

Scott Mayfield: It has an indoor shower that drains directly into the grey water tank. The toilet is a Nature’s head composting toilet. There are also two outdoor showers.

TCA: This rig looks great. What are the specs? 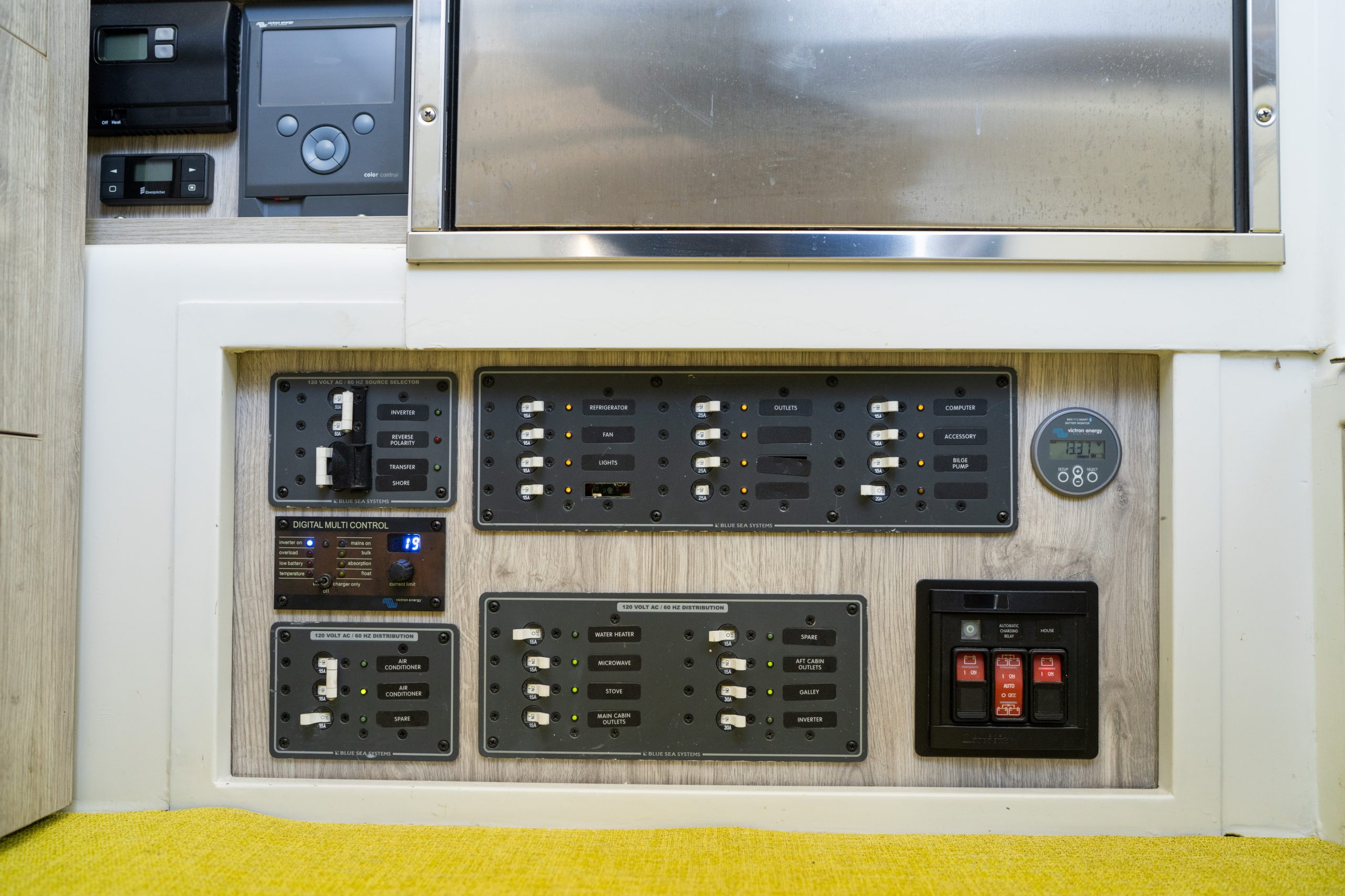 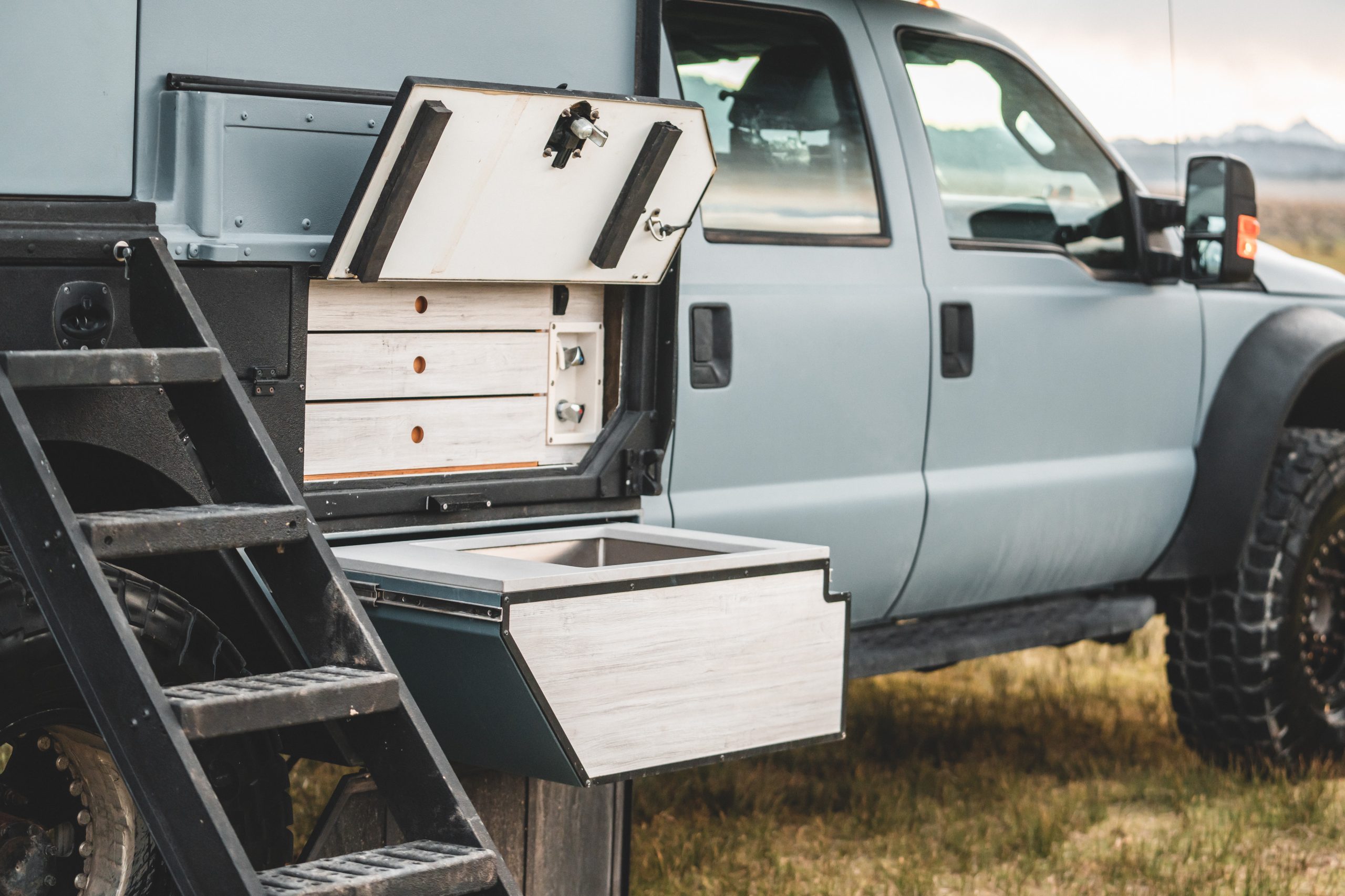 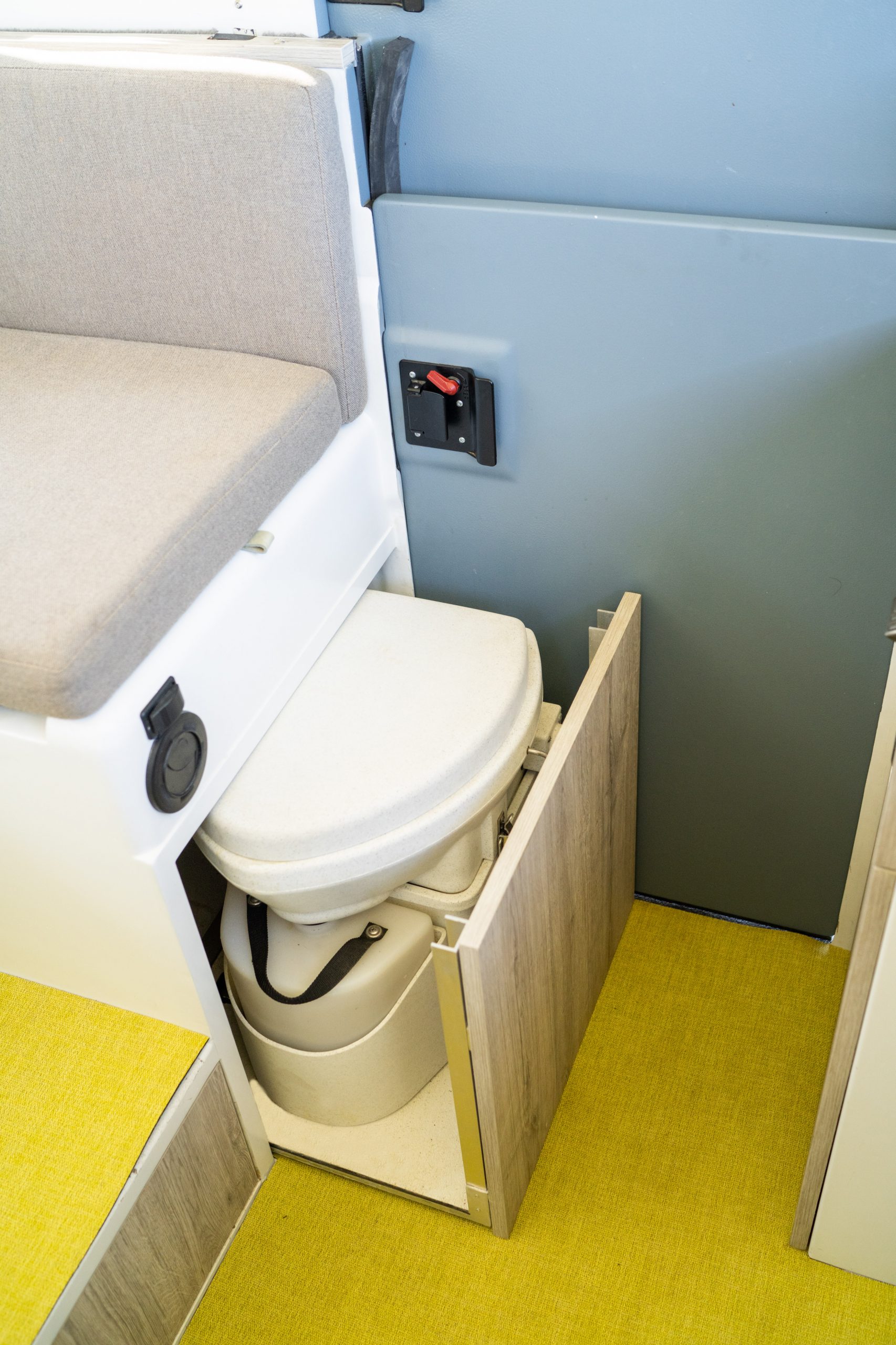 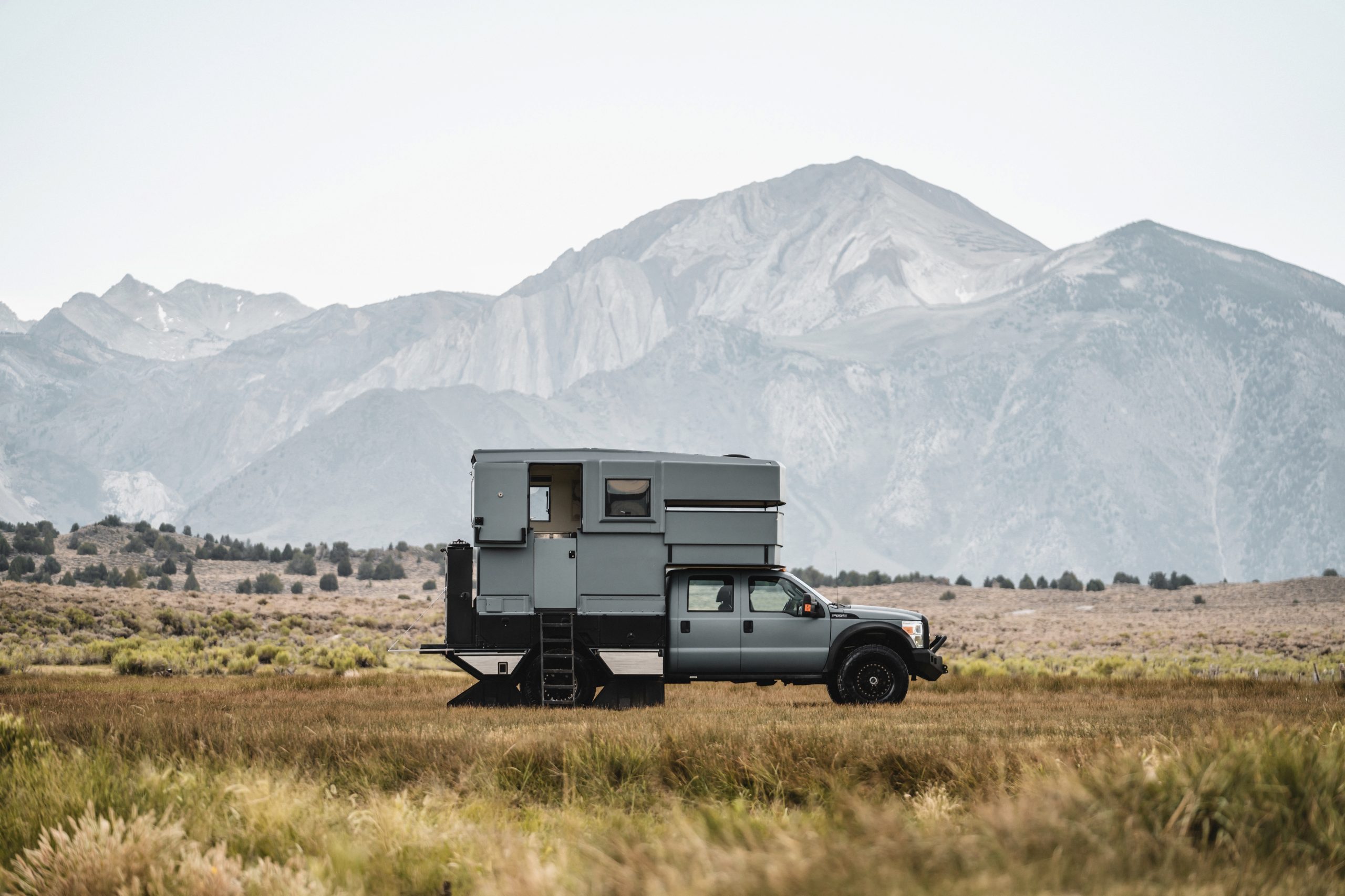 TCA: Can you tell us about the camper’s heating and cooking systems?

Scott Mayfield: Heating and cooking are primarily electrical. For heating and AC, I rebuilt and ruggedized a Mitsubishi mini-split AC system. I can heat or cool on about 325 watts, so far between solar and battery capacity I’ve been able to run both indefinitely. I also have an Espar D5 Hydronic Heater that gets used rarely. For cooking, inside there is a Kenyon induction cooktop. Outside in the pullout there is a second Kenyon induction cooktop and a Kenyon electric BBQ. We have a small propane stove as a backup.

TCA: How durable is the pop-top roof? How much weight can it support?

Scott Mayfield: It is very durable. Several people can stand on it without issue. It is powered by four linear actuators that have a capacity of 2,200 pounds. They are high end actuators from the Netherlands.

TCA: Is there anything else you’d like to tell us about the truck and camper?

Scott Mayfield: One of the features I am most proud of is the cabover third wall system. The middle wall of the accordion wall set up can be controlled independently and is powered by a separate linear actuator. I embedded a pulley system in the panels for the roof. When we pull into camp and it is nice out, we lower that wall and can be indoors and out of the sun but in the open air.

We have really nice cooking pullouts in our storage boxes. There is a sink pullout that has a sump pump attached and pumps the grey water bank into the holding tank. There is a ton of storage as well which is important to us since we surf and spearfish quite a bit. The bed lifts to reveal a full king-size underbed storage compartment. The locker underneath the camper also has one compartment that is full width open to storage.

TCA: What are you plans for the future?

Scott Mayfield: We are putting the camper up for sale to pay for our next build (I love building things). If anybody is interested in buying Adrift, please contact me at [email protected]. 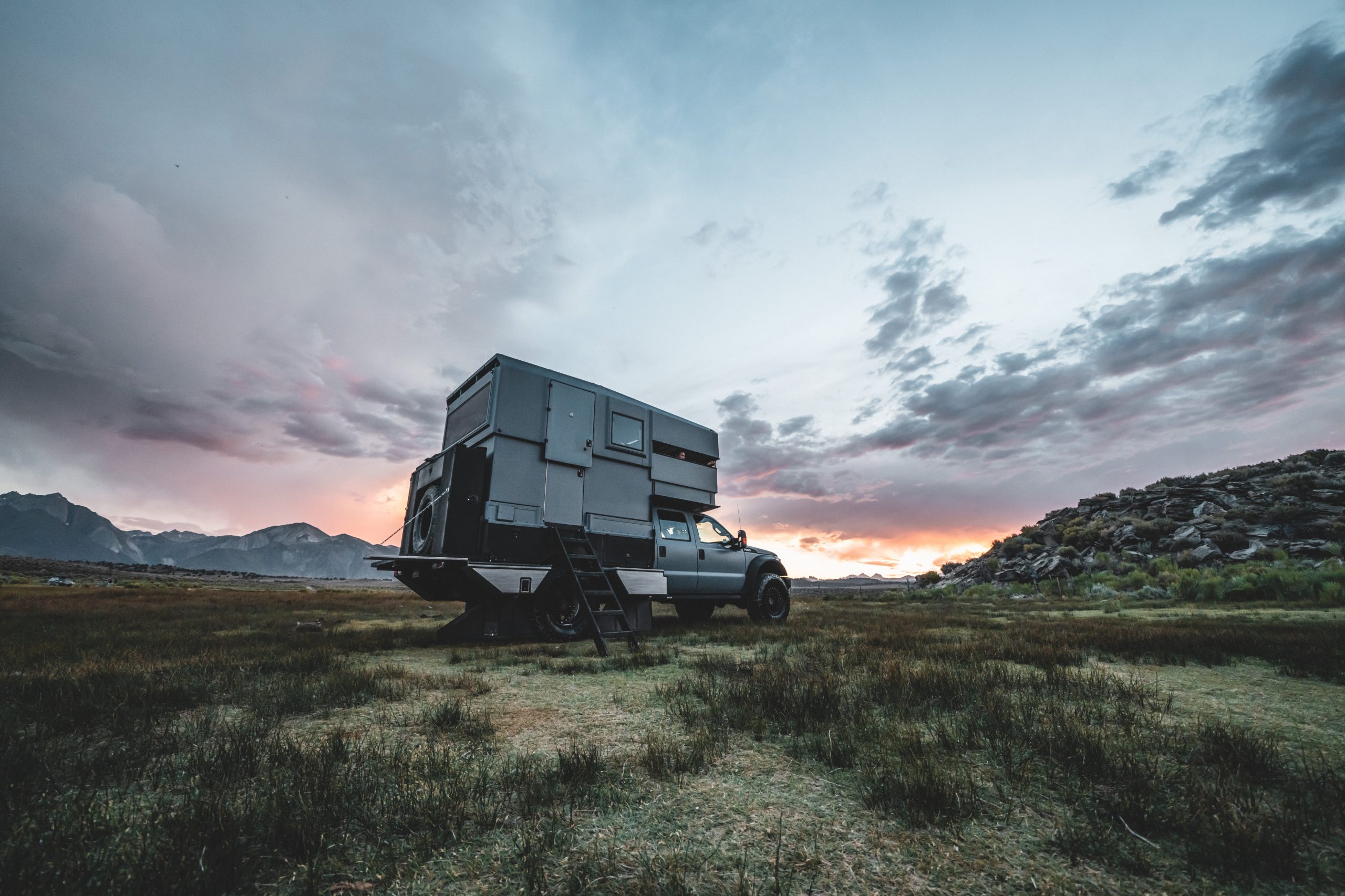 About Mello Mike 560 Articles
Mello Mike is an Arizona native, author, and the founder of Truck Camper Adventure. He's been RV'ing since 2002, is a certified RVIA Level 1 RV Technician, and has restored several Airstream travel trailers. He currently rolls in a 2013 Ram 3500 with a 2021 Bundutec Roadrunner truck camper mounted on top. A communications expert, he retired from the U.S. Navy in 2004 as a CWO3 after 24 years, worked in project management, and now runs Truck Camper Adventure full-time. He also does some RV consulting, repairs, and inspections on the side.
Website Facebook Instagram YouTube

One of the great things about solar power is how easy it is to use. As long as the sun is out you’ll get a free and renewable source of energy that’s not only clean [read more]