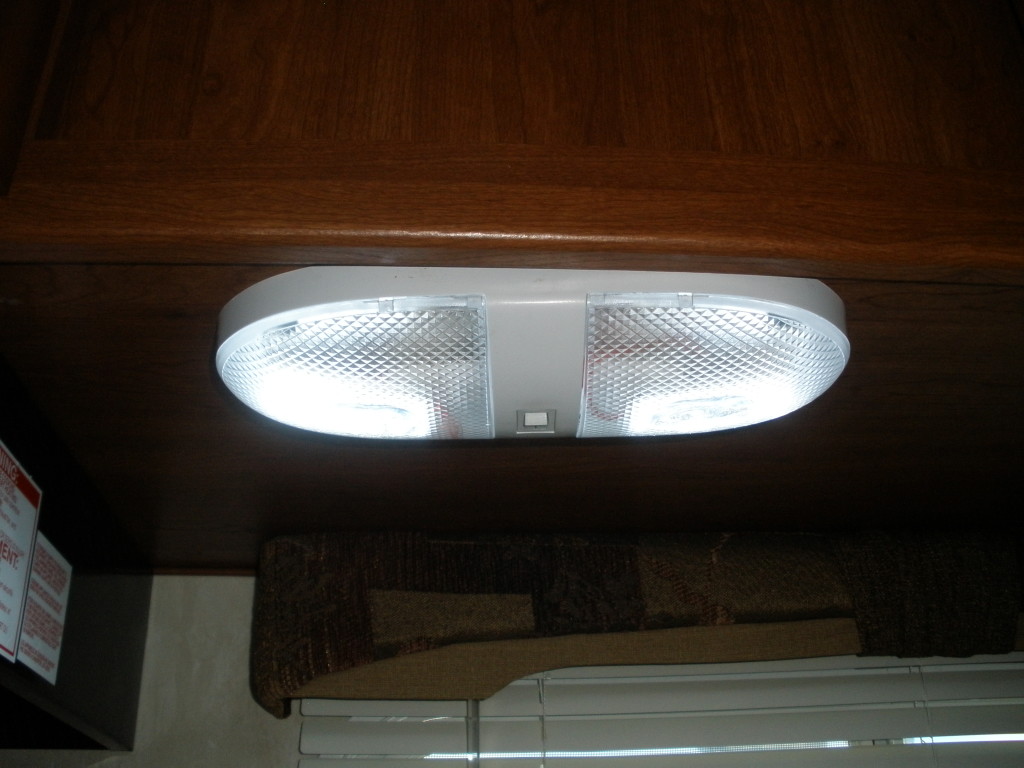 Whether you’re at home or camping in your RV, lighting is one amenity we often take for granted. Indeed, take it away for just one hour and it can turn your world completely upside down. If you’ve experienced a battery failure in your RV or a loss of power at home, you know exactly what I’m talking about.

For those who prefer to boondock or dry camp, having the right kind of lighting can make a world of difference. The RVer has three basic choices when it comes to lighting: incandescent lights, florescent lights, and LEDs. All have their pluses and minuses, but for the boondocker, LEDs are a clear winner. LEDs last longer, consume far less power than incandescent bulbs, and produce far less heat, an important consideration during warm summer months.

Shortly after purchasing my camper, I started researching options for LED lighting. The combo bunk in the dinette of my camper was the first priority. The bunk had no lighting due to the fact that it wasn’t a factory install. Fortunately, I had a couple spare LED puck lights left over from a classic Airstream restoration. These 3.2 inch diameter lights produce a warm light and consume a measly 70 milliamps. What I realy like about these lights is that they have two red LEDs that stay on at all times. The cool, red glow makes a perfect night light and consumes just 10 milliamps (1/100th of an amp). I also installed a 12 volt power outlet for use while sitting at the dinette. These items were purchased from Vintage Trailer Supply.

One complaint I have about my truck camper is the lack of 12 volt outlets. The factory installed just one in the entire camper. The manufacturer literature boasts of having seven 110 volt outlets, but for a camper that is made for Boondocking and dry camping to have only one 12 volt outlet is a real head scratcher. At the very least there should be two in the camper, with one in the over cab area and one on the main level. The dinette area is the ideal location, which is why I decided to install the new 12 volt outlet there.

Finding the 12 volt power for these new additions was a bit tricky. I had a couple options. One of these options included running new 12 volt wires from the 12 volt fuse panel, but I opted to tap into the refrigerator’s 12 volt power feed instead. This option had even more appeal due to the fact that the feed had relatively large 12 gauge wiring and was located next to the combo bunk, requiring less wiring and drilling.

The LED retrofit for the rest of the camper’s lighting was extremely easy. The retrofit was just a matter of removing the old 921 incandescent bulbs and replacing them with the new 921 compatible LED bulbs and pads purchased from LED 4 RV (the specific link to the lights I used can be found near the end of this article). In case you’re not familiar with LEDs, there are choices in the kind of light they produce. In the past we liked florescent lights in the kitchen so we went with the bright white (bluish) LEDs in these fixtures while installing the warmer (yellowish) lights in the rest of the camper.

The two pics below show these new LED wedge bulbs I ordered. These bulbs feature 12 LEDs on the end for a 75 degree arc and consumes just 51mA at 12.0 volts. Not too shabby. The wedge bulbs were placed in the two bedroom reading lights as pictured below.

Installing the LED pads required a little more effort. Each pad must be mounted lengthwise at a slight angle using the velcro tape that is included with one side taped to the bottom of the socket assembly. Refer to the pic below as it will illustrate what I’m trying to say better than I can explain it. As the bulbs are also polarity dependent you may also need to flip the bulb in the socket for it to work. I had to do this with a couple of the LEDs.

The LEDs look terrific and are nearly as bright as the old incandescent bulbs, but consume far less power. The warm light LEDs produce 332 lumens of light but consume just 52 milliamps (.65 watts) at 12.6 volts. That’s a far cry from the old 921 incandescent bulbs which consume a whopping 1.4 amps (18 watts). The two bright white LEDs I installed in the kitchen are much brighter at 459 lumens each and consume a little more at 60 milliamps (.75 watts). But that isn’t the only pro related to LEDs. They also last longer, around 50 to 60,000 hours whereas an incandescent only lasts 200 hours. The bottom line is that LEDs are great for the boondocking enthusiast and for the discriminating RVer looking for a good value.

In case you’re wondering specifically which pad I purchased, I ordered item T10P21x68WW. They come in either warm or bright, you have to specify which. If you have any questions about which LED to order for your RV, ask the owner, Dan. He’s polite and very helpful.

So if you’re looking at making your RV more boondocking friendly, one of the first modifications I would make is to install LED lighting. It’s easy to do, and well worth the effort. The lower drain on your batteries, and the longer life of LEDs compared to incandescent lights, makes the up front cost well worth it.

Tail lights are meant to be seen and my Jeep Wrangler’s lackluster, 17-year-old OEM tail lights were barely cutting it. Without a doubt, this was an upgrade that was needed not only for looks, but [read more]

When we took delivery of our Wolf Creek 850N camper last month it was lacking several options that we really wanted. Foremost was the fold-down combo Bunk/Roof Locker. Storage space is always lacking in a [read more]

“Rig for Red!” A Simple Red Light Mod For Your RV Truck Camper

Are you a stargazer or a night photographer looking for a way to get around in your truck camper without ruining your night vision? Perhaps you’re looking for a good night-light or maybe you’re someone [read more]