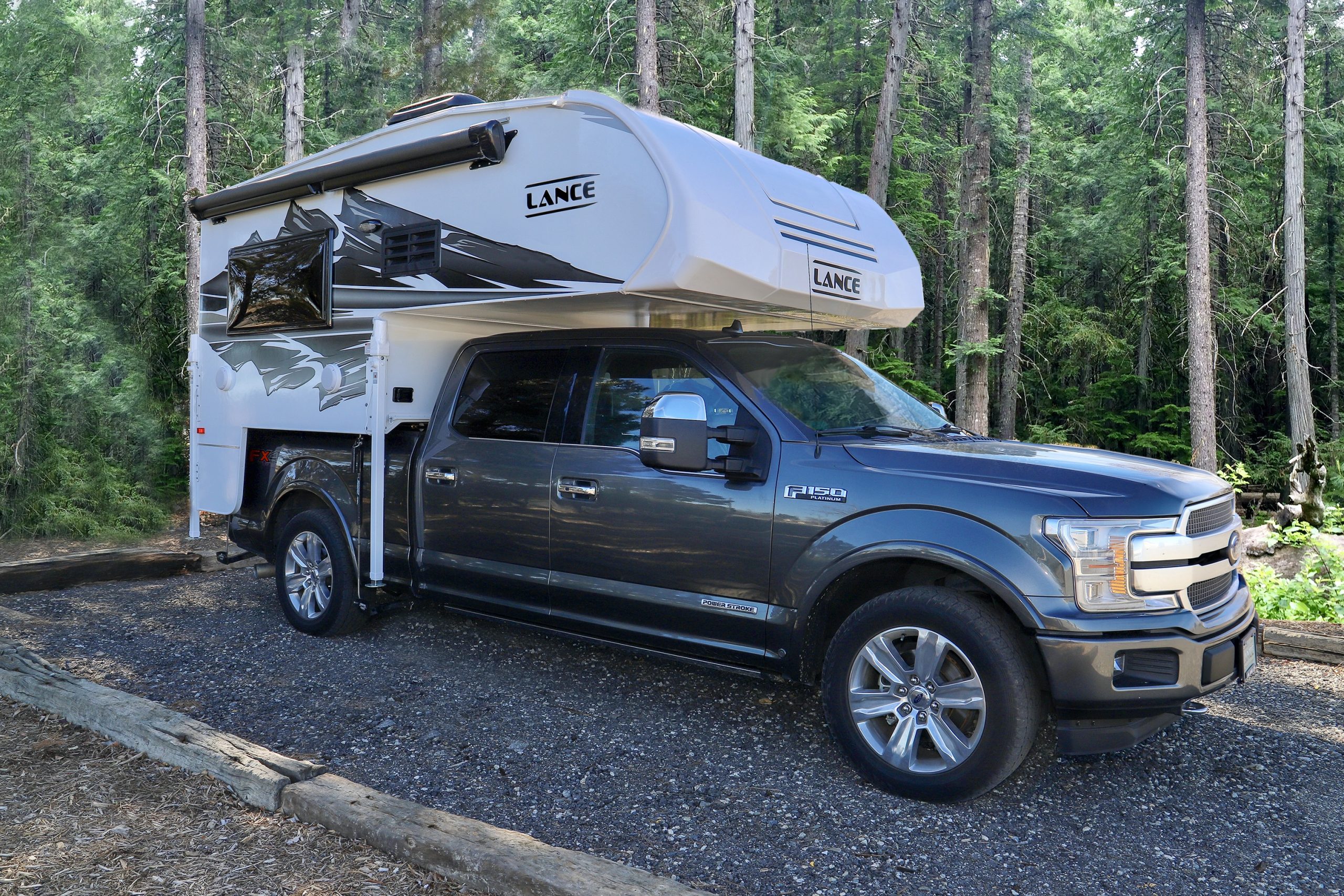 For years Lance Camper’s top selling truck camper was the Lance 1172, but not any more. The Lance 650 is now the company’s best seller with the most units sold in 2021. The Lance 650 edged out the 1172 and 825 models, which came in second and in third, respectively.

The Lance 650’s ascendancy to the top makes sense. Of the nine truck camper models currently being offered by Lance, the 650 model is the smallest with a 6-foot 10-inch floorplan. Yet, in spite of its size, it still offers everything one would expect to find in a full-size camper including a wet-bath with sink, a full-size dinette, a kitchen, and a north-south queen-size bed. The fact that the Lance 650 fits well on both short-bed (6.5 feet) and mini short-bed (5.5 feet) trucks is an added bonus.

Another reason for the Lance 650’s popularity is its weight. The short-bed camper weighs only 1,700 pounds dry and 1,903 pounds wet. This makes it light enough for many half-ton trucks, including the Ford F150, the best-selling vehicle in America (one 2022 F150 King Ranch SuperCab short-bed 2WD model we spec’d offered a 2,238-pound payload rating). With the sheer number of half-ton trucks on today’s streets like the Ram 1500, the Chevy Silverado 1500, the Toyota Tundra, and the Nissan Titan, the decision to design a lightweight camper like the Lance 650 was a no-brainer.

Designing a short-bed, half-ton camper with a molded wet-bath isn’t easy, but Lance designers were able to pull it off by shedding pounds where possible and by going with a smaller 6-foot 10-inch floorplan (some short-bed campers have an 8-foot 11 inch floorplan). The biggest savings in weight was realized by going with a welded aluminum frame, something that Lance has been doing since 2006 when they went away from heavier wood framing. Additional savings were made by using a 3-cubic foot refrigerator, by using smaller holding tanks, and by ditching the water heater for a lighter on-demand water heater. Lance designers also scored big by opting to go with lighter, tip-out acrylic windows rather than conventional glass sliding windows. All of these weight-saving measures help make the Lance 650 surprisingly light.

With all of these efforts to save on weight and space, however, the Lance 650 still packs a wallop when it comes to features. Standards include a molded wet-bath with sink, a one-piece molded nose cap, holding tanks of 22 gallons fresh, 15 gallons grey, and 16 gallons black, a 20-pound propane tank, a Suburban 18,000 BTU furnace with ducted heat, a 32×76-inch convertible dinette, a black tank flush, an Easy Charge exterior charging station, an on-demand water heater, a battery disconnect, and more. Plentiful storage can be found above the dinette and in the cabover. 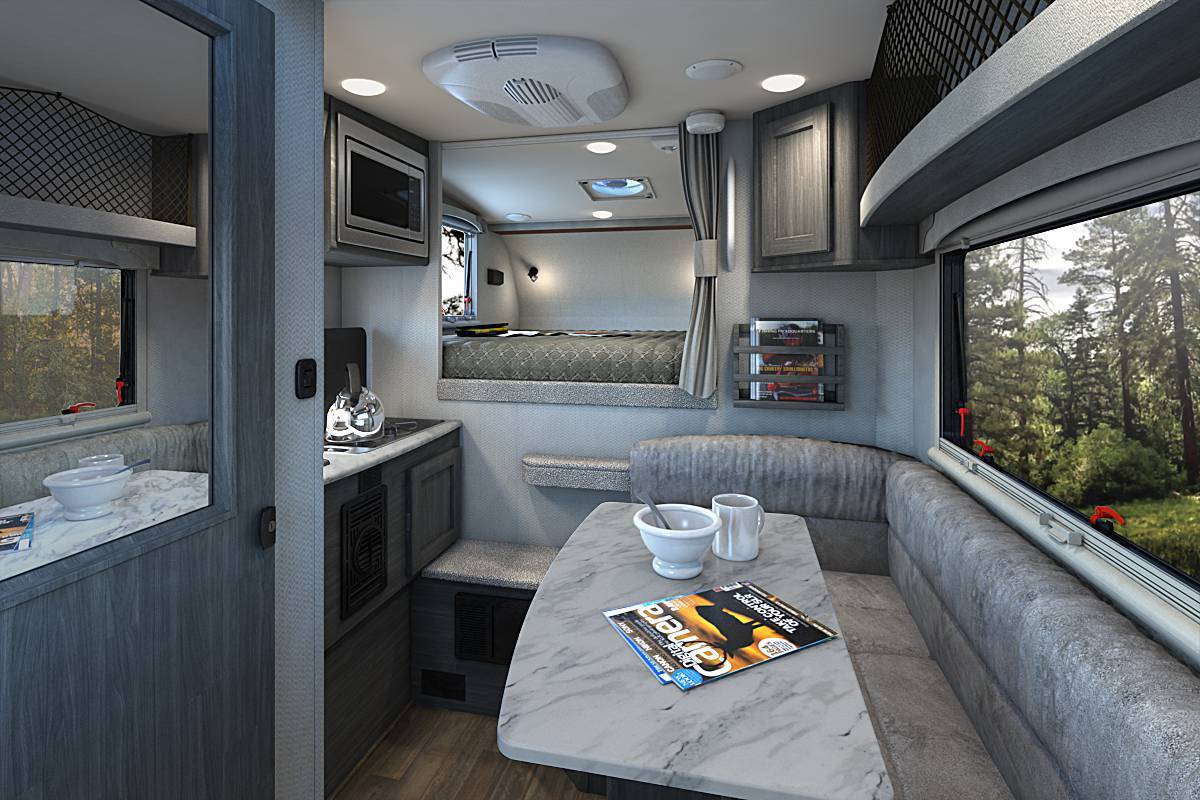 Lance’s best options include a weight-saving Battle Born 100 amp hour lithium battery (lithium weighs half as much as AGM), a 100 watt solar power system, a backup camera with wireless monitor, a battery separator (a must-have option for lithium), a low-profile air conditioner, rear and side awnings, electric jacks with wireless remote, and a keyless entry.

In 2022, Lance is offering even more for the Lance 650. These include an improved mountain graphics package along with black exterior accents to bring a more sporty, off-road look to the camper. Lance is also offering three new interior decor options labeled “Grayson” (Gray), “Bronzite” (Brown) and “Lapis” (Blue), as well as a lengthy list of options including a smart TV, a cell booster, Torklift Glo-Steps, as well as the simplification of ordering combinations with over twenty optional features being made standard. This makes ordering much easier and also results in the most accurate MSRP labels in the market in terms of both pricing and weights.

When we first saw the newly-launched Lance 650 in 2015, we knew the feature-packed camper was going to be a winner. Very few truck campers of this weight class delivers all that it does at only 1,700 pounds and looks good doing it. It’s true that Lance engineers borrowed much from the classic Six Pac D650 truck camper when they designed it, but they went well-beyond simply copying that brilliant camper, they also updated it with numerous improvements including an aluminum frame, a modern-looking interior, and modern technology.

Will the Lance 650 continue as Lance’s top seller? We think so. The trend with the younger demographic is to go lighter and smaller. The Lance 650’s status as a top-seller simply reflects that growing trend.

Lance Bolsters Efforts to Ensure Quality in its Truck Campers

Lancaster, California-based Lance Campers, an REV Group company, just announced several projects and initiatives that double down on the company’s commitment to offer the highest quality travel trailers and truck campers on the market. At [read more]