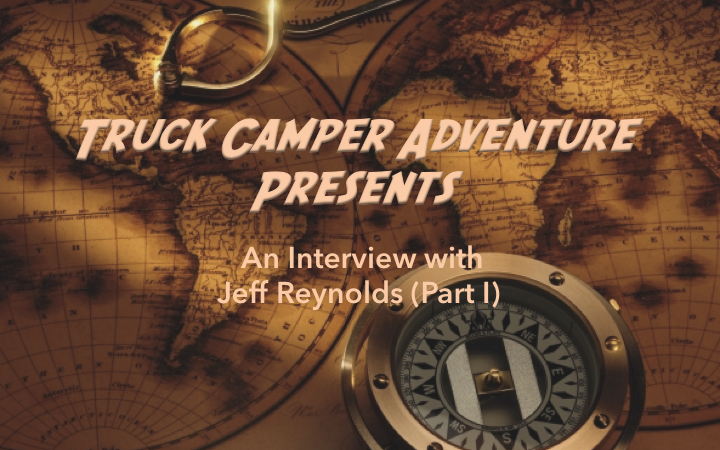 When it comes to extreme truck campers (XTC’s) and exploring off-road, few people know more than Jeffrey Reynolds. Known as Jefe 4×4 on the Internet forums, Jeff embarked on his first off-road adventure in 1965 and hasn’t looked back since. He’s owned a dozen 4×4 vehicles of various makes and has traveled well over a million miles in them. In the 1990s he worked as a staff writer on the Jeep section of Off-Road.com then later wrote articles for 4x4Wire.com about the nuts-and-bolts of 4×4 drive-trains. In 2001 he bought a Lance camper to go on his Dodge short-bed pickup truck and his whole world changed from rock crawling in Jeeps and other 4×4 vehicles to less extreme off-road exploring in a truck camper. Now at age 70, Jeff is in the “December” of life, but still shows no sign of letting up as he continues to explore exotic locales in the American west.

Mike: Thanks again Jeff for taking the time to talk. How did you acquire the nickname, Jefe?

Jefe: The nickname, Jefe, pronounced Hay’-fay, which means the boss or chief in Spanish, was pinned on me during my tenure as a bass trombonist with the Los Angeles Philharmonic (1969-2006).

Mike: Why is the name Cabeza de Vaca stenciled on the rear door of your camper?

Jefe: Cabeza de Vaca is a mystical character and his family name is a double entendre. Firstly, I’ve read all the books about this itinerant explorer and his travels starting with his shipwreck on the west coast of  Florida during a hurricane, making his way through the later-to-be Gulf states and west to near the Pacific coast and south eventually to what is now Mexico City to be picked up and taken back to Spain in the early 1500’s. This little ditty took him ten years, at which time he was forced into slavery a couple times by the now-extinct indian tribes; was naked half the time, and almost died of dehydration, starvation, sickness, flogging, over exposure, over and over again. I kind of identify with this guy. Secondly, a side shot of our truck camper gives a hint of a cow’s head if you put eyebrows on the front-side windows.

Mike: How long have you been RV’ing?

Jefe: Since 1965. The definition of an RV is a vehicle with accoutrements for eating, and sleeping inside, with or without a bathroom space. In that regard, we camped in all the larger 4×4’s, out of the weather, and mostly in very cramped mode. If your definition includes plumbed water, two showers, a wet bath, a dining area, a three-way refrigerator, heat and a queen size bed, then the first year was 2001.

Mike: What truck camper do you presently own and why did you choose that make and model for your XTC?

Jefe: Once we had a car trailer to get my rock rig to the trail-head, then we thought about a small hard side truck camper to go along with it. I opened the Recycler and found a 1998 Lance Squire Lite 165-s. I called the guy. I looked at it. He used it three times. It chose me. I followed him to the bank and wrote a check. The whole thing went down on the same day. Just lucky I guess. My wife, Jeanie, and I have camped in it over 200 nights.

Mike: Do you tie down and rig your Lance camper a certain way to take it off-road?

Jefe: Without a three-point or four-point truck camper attachment system on a flatbed, I have relied on “working” the four tie downs to be appropriate to the road surface. The frames on all pickup trucks are built to flex/tweak/rack. The truck bed will flex right along with it. This all depends on road surface and how twisted up you allow the axles. If you do not considerably loosen the rearmost tie-downs crawling over an undulating road surface, the twisting frame will try to pull your truck camper apart, little by little, by making the camper conform to the truck bed and frame twisting. Why the rearmost? In jacking the truck camper up above the truck bed for removal, I noticed most of the weight of the truck camper is on the forward jacks. Hmm? Little weight on the rear, at least on mine. I allow the rear of the truck camper frame to “float” and actually lift off the bed on one side or the other, trying not to conform to the twisting frame/bed, just follow the attitude of the front tie-downs. For off-roading, there is no room for camper jacks. They are just heavy outriggers ready to make contact with a slowly passing boulder. I remove them as soon as the camper is on the truck and leave them at home. Another issue I have pursued is to store nothing on the roof; all weighty items should be stored as low as possible. Potato chips, tea bags, and beer cozies; up high.

Mike: What measures do you take to prevent your Lance camper from shifting and sliding around in your truck bed?

Jefe: A thin, heavyweight bed mat and Lance camper brackets (aka centering guides) are a good start. I went through all the other permutations including; a fiberglass bed liner (huge mistake as the camper just skated around), a thick rubber mat (too spongy which increases your side-to-side sway) and nothing but the bed, which is pretty tough on the bottom of your truck camper. I tried without the brackets but the truck camper still would slide from side-to-side putting inordinate stress on the tie-downs, especially when you loosen the rear for axle twisting. There is only one way the camper can move now and that’s rearward when the tie-downs are very loose. The Dodge has a footman’s loop on each side outboard of the tailgate which could use a 1,000-pound strap to hold the box in the bed. I have had the camper try to make it’s way out the back going up steep hills for miles but it doesn’t get very far. The strap should contain the egress.

Mike: What modifications have you made to your truck camper and why did you decide against going solar?

Jefe: Solar power is very inviting, but with all those tree branches dragging on the aluminum roof and the weight of solar panels up high, I think I’ll pass for this lifetime. I purchased the model with no air conditioning, nor a built-in generator to keep the weight down. On off-season trips we take the Honda EU2000i on the off chance we need to run a house current device or charge batteries. I have some mods I’d like to make on the truck camper. I would like to loose both the front window and the pass through window as I find them useless and only there to transmit cold and heat, add weight and leak. If I had the four-season insulation package, I would be happy as we are non-summer campers. In the end, I think I bought the right truck camper for us as there is very little I would change. You know, if it’s paid for, it fits your needs; and you are accustomed to and can work around its foibles, you might be a happy camper.

Mike: What pickup truck do you presently drive and why did you choose that make and model?

Jefe: I purchased my 2001 Dodge 2500 4×4 pickup truck brand new at the dawn of the diesel wars. I purchased it because it was the first year for a 35-spline, Dana 80 rear axle, the Cummins HO turbo diesel engine that used a bullet proof NV6500, 6-speed transmission, an NV241HD (wide chain to absorb the shock loading during snow plowing), disc brakes all around, and could run on third-world diesel fuel with pretty good mpg. No smog device. No soot bag. No urea canister. Not as simple as the first generation Cummins, but with a much more stout drive train. My choices had to do with tradeoffs. Notice my choice was focused on drive train strength and survivability, certainly not Dodge’s notoriously flimsy fit and finish. Oh, and it was the only truck engine and drive train that year in which I had any confidence about it outlasting me. So far, so good at 150,000 miles.

Mike: What off-road modifications have you made to your truck?

Jefe: If you choose your truck camper well, most of your mods will be to the truck. During the last decade I’ve made the following mods:

Mike: Which engine type do you prefer, diesel or gas?

Part two of this fascinating and informative interview with Jefe can be found by clicking here.

About Mello Mike 644 Articles
Mello Mike is an Arizona native, author, and the founder of Truck Camper Adventure. He's been RV'ing since 2002, is a certified RVIA Level 1 RV Technician, and has restored several Airstream travel trailers. A communications expert, he retired from the U.S. Navy in 2004 as a CWO3 after 24 years, worked in project management, and now runs Truck Camper Adventure full-time. He also does some RV consulting, repairs, and inspections on the side. He currently rolls in a 2013 Ram 3500 with a 2021 Bundutec Roadrunner truck camper mounted on top.
Website Instagram YouTube

In the Spotlight: 2018 Hallmark Milner and DEFCO ‘Heavy-Duty Raptor’

We love truck campers here at Truck Camper Adventure. One of the best places to view the 4×4 variety is at the Overland Expo West. By far, the best truck camper rig on display at [read more]

If you’re looking for an incredibly scenic drive near Phoenix, Arizona that can be completed in a day or two that also offers excellent camping opportunities, then the Apache Trail (Arizona-88) is right for you. [read more]