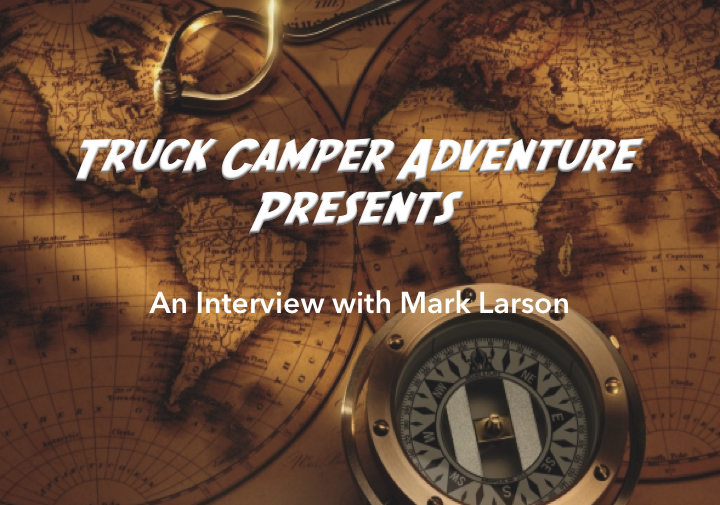 When it comes to off-roading and photography few are more accomplished than Mark Larson. Known as “GpnAZ” on the Internet forums, Mark is a native of Minnesota and has been a resident of Arizona since 1973, except for a brief period from 1989 to 1994 when he lived in Las Vegas. He works as a plumbing contractor, is married to his wife Sue, and is the father of two daughters, three stepsons, and has four grandchildren. He’s been four-wheeling throughout the western U.S. and Mexico since the 1970s in everything from dune buggys, ATV’s,, and UTV’s, to Blazers, Jeeps, and truck campers. Mark’s current interests include photography, travel, four-wheeling, and study of the Bible.

Thanks, Mark, for taking the time to talk. When did your interest in RV’ing start?

Mark: Since 1971. I bought a 1945 Reo school bus that had been converted into a camper when I was a senior in high school. After I graduated, I toured Minnesota in it with a bunch of my buddies. My first truck camper was a Four Wheel Camper Hawk that I owned for 12 years.

Can you tell us about your truck camper and why you choose that particular make and model?

Mark: We owned a 2013 Lance 865, but we just traded it in for a 2016 Arctic Fox 811. We are planning on taking some longer trips in the future and most of our travels will be to state and national parks and to Alaska in 2017. The Arctic Fox 811 gives us more room for lounging, when needed, and has much larger holding tanks for boondocking.

Which tie-down and turnbuckle system do you use to secure your Arctic Fox 811?

Do you use anything to prevent your camper from shifting and sliding around in your truck bed?

Mark: Only a bed mat. I’ve been contemplating a system to hold the camper better in place, but have not decided on one yet.

Have you done any mods yet to your Arctic Fox?

Mark: Not at this point. I’m planning on adding a solar power system in the near future.

Can you tell us about your pickup truck and why you choose that particular make and model?

Mark: I currently own a 2014 Ram 3500 Laramie 4×4 SRW with the 6.7L Cummins Turbo Diesel and the Aisin transmission. I bought it for more payload, comfort, power, and off-roadability.

Have you made any mods yet to your truck?

Toyo’s are nice. How large are they and what inflation values do you typically run when driving off-road?

Mark: They are Toyo All-Terrain 295/70R-18, E rated, with a 4,080 pound load rating. I typically run them at 25 psi in heavy sand with the camper; otherwise, 40-45 psi on dirt roads if there is enough distance to justify airing down and back up.

Do you tow anything like a Jeep or boat with your truck and camper?

What kind of towing setup do you use to tow your TJ?

Mark: I use a custom-made tow bar. It’s not very elaborate, but it’s simple to hook up and install. I also use a Brake Buddy for braking and it works on a wireless receiver. My Jeep is also wired to work through the tail lights for all the braking and turn signal functions using a flat four-pin connector. I’ve flat towed my TJ approximately 30,000 miles.

Why did you choose a TJ and not some other Jeep or 4×4 vehicle?

Mark: I’d been four-wheeling with my 1987 K5 Blazer for almost 10 years and was doing pretty well with it until I rolled and totaled it in Moab in 1996. I decided that I wanted something a little more nimble in size and, of course, always being around Jeeps at the Moab Easter Jeep Safari, I decided to get the new generation TJ Jeep. It was one of the first 6 cylinder TJs ordered in Phoenix in 1996. I dropped it off at Desert Rat Off-Road, and had a custom lift, bumpers and rocker protection made for it, along with a Currie reverse cut Dana 44 differential, 4:56 gears and ARB air lockers. I also had them install 4:1 gearing in the transfer case. The TJ has been a great all around vehicle for the street and off-road. I’ve made a few different changes with the TJ since I rolled it in 1999, which included a new roll bar system and an up-to-date suspension lift.

What tools and recovery gear do you consider essential when going off-road?

Mark: I carry a shovel, a heavy-duty tow strap, jumper cables, a portable 12 volt compressor, a cell phone, a Spot locator, lots of water, and a good assortment of tools.

Do you have any favorite trails or areas where you like to explore?

Mark: I really enjoy the trails around Moab, Utah. I’ve attended the Moab Easter Jeep Safari since 1993. I love exploring the area around Lake Powell also.

Which Jeep trail has proved the most difficult thus far?

Mark: Hell’s Revenge was the most difficult, although I totaled my K5 Blazer on Moab’s Potato Salad Hill in 1996.

What’s the toughest trail you’ve explored in your Lance 865?

Mark: That was when Dave Rogers (Whazoo) and I attempted to get to the Lee’s Ferry Overlook. The sand got so thick we decided to turn around after I got mine stuck. We ended up going to another overlook by the Voodoo Hoodoos overlooking Lake Powell. The next day we four-wheeled into another camp site that overlooked the Paria River.

What was the most challenging trail you tackled in your Four Wheel Camper Hawk?

Mark: That would have to be the Cinders OHV area by the Sunset Crater National Monument. I four-wheeled up one of the higher peaks called Double Crater which is actually an inactive Volcano. We camped all night there and enjoyed 360 degree views. Another tough trail was the climb up Hunt’s Mesa in Monument Valley. We went with an Indian Guide and another photographer friend with his F-150 and popup camper. The trail was very sandy and had some nice rock ledges to get up and over. We camped overnight atop the mesa and were rewarded with spectacular sights both that afternoon and next morning.

Are there any areas or trails that you think are overlooked by most overlanders?

Mark: With the advent of the Internet, Google Earth, GPS, and the popularity of off-road exploring, I don’t think there are too many areas that have been overlooked, more the opposite.

What advice would you offer to those who are considering buying a truck camper to take off-road?

Mark: Keep it light, narrow, and low with no rear overhang.

If you were to buy a brand new truck camper or overland RV, and price wasn’t an issue, what would it be?

Mark: As I mentioned, we just traded our Lance 865 in for a 2016 Arctic Fox 811. It’s a little big for most off-road adventures, but we’ve mainly been frequenting Forest Service roads and jaunts to the Cinders OHV area, Glamis Sand Dunes and are planning a trip to Alaska in 2017. If I was to buy another off-road camper it would be a Four Wheel Camper Hawk or a new Alaskan 6.5.

Have you had any notable run-ins with wildlife like bears?

Mark: Yes, just one. I was photographing up by Dry Lake which is above the Point of Pines Lake on the San Carlos Reservation, and I was using a 4×5 view camera with a drop cloth. When I brought my camera into focus, I saw a black bear in my viewfinder. Luckily he was far enough away, so he wasn’t a problem. He just startled me. I couldn’t stop thinking about him every time I put my head under the drop cloth, so I packed up the camera and left the area.

You’re pretty big in photography. Can you tell us more about that and how you got started?

Mark: I started photographing car races in the late 1980’s, and after moving to Las Vegas, I started photographing landscapes. After moving back to Phoenix in 1994, I got involved with Friends of Arizona Highways Magazine Photo Workshops. After taking a few of their photo workshops, I signed up as a volunteer and served on the board of directors and worked as an escort for their photo workshops for 10 years. I’m focusing on photographing old historic churches and crosses, especially those in small towns all over the United States. I’m always on the look out for these, so I’m open to any suggestions or recommendations from your readers. My film photo website is www.MarkLarsonPhotography.com; my digital photo websites are www.flickr.com/photo/gpnaz, www.flickr.com/photos/his_cross; and my travel website is www.flickr.com/photos/gpnusa.

Do you have any photography tips for amateurs like us?

Mark: Photography is best done in the first and last two hours of the day. If you have to photograph in the middle of the day, which happens to me often when I’m photographing churches, I’ll use a polarizing filter to help soften the harshness of the sun. When photographing early and late in the day, I always try to use a tripod. It’s an essential tool for landscape photography. Try to avoid centering your main subject or horizon and try using the “rule of thirds” in your composition. I had one of my favorite Photographers tell me one time, “If God has blessed the sky make it the focus of your image, or if God has blessed the landscape, make it the focus of your image.” Know your camera and settings, and how f-stops and shutter speeds will affect your images. Another one of my favorite tips is to always turn around and see what is behind you when you’re photographing. Sometimes it will surprise you.


Those are great tips, Mark. This has been great talking to you. Thanks again for taking the time to talk. Do you have any final words or advice?

Mark: Yes, join the Blue Ribbon Coalition to help save our public lands, Tread Lightly, and pack out anything that you brought in!

If you’re a daredevil who enjoys thrilling, hair-raising drives then you’ll love tackling the Moki Dugway in southern Utah. Located on Utah-261, the dugway twists and turns 3 miles and drops 1,100 feet from the [read more]

Diesel vs Gas: The Pros and Cons for Truck Camper Rigs