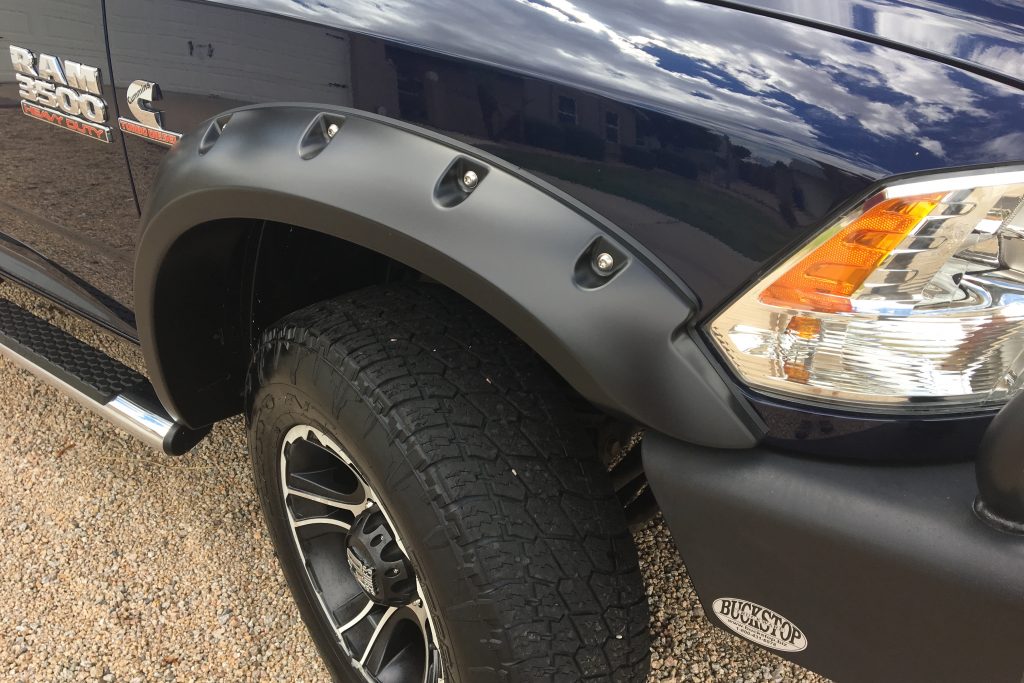 The aftermarket fender flare has become a very popular modification over the years. The primary function of the fender flare is to provide more tire coverage. This extra coverage not only prevents rocks from being kicked up and causing damage to vehicles behind you, but it also helps retain the resale value of your truck by deflecting rocks and debris away from the body. I recently installed a set of Bushwacker pocket fender flares on my 2013 Ram 3500. I’ve always wanted to get a set of these top-of-the-line flares for my truck and finally got around to doing it. With its rugged, off-road style and bolt-on look, there isn’t a better made or a better looking fender flare on the market. While looks played a role in my decision to go with Bushwacker, the pocket style fender flare made by Bushwacker provide a lot more tire coverage. How much more? An extra 3.5 inches of coverage for the front wheel wells and an extra 3 inches for the rear.

Bushwacker fender flares are American-made and built to last. Unlike the fender flares made by the other companies, the UV protected Dura-Flex 2000 ABS plastic used to make Bushwacker’s fender flares is flexible so that any bumps or scrapes encountered from tree branches and bushes while driving off-road are less likely to crack or shatter the flares. Bushwacker flares will even stay flexible in extreme cold. Bushwacker makes five different styles of flares for trucks: Street Flares, OE Style flares, Extend-A-Fender flares, Pocket Style fender flares, and Cut Out fender flares. You can buy them either painted to match the color of your truck or in matte black. I opted to go the latter route. In retrospect, though, I wish I would’ve gotten the painted ones instead. Still, the great thing about the matte black flares is that they can be painted at some point in the future.

Installation was pretty easy. In all, it took about four hours and that includes installation of the pocket bolts and washers and rubber trim and removal of the OEM wheel well trim on the truck. No drilling was required and all holes lined up perfectly on my truck. For me, the hardest part was getting the rubber edge trim installed just right on the front flares. There are two compound curves along the front and to get the trim to conform with these bends requires some cutting and bending of the trim. I had a heck of a time trying to get the cuts just right. Other than that, the rest of the installation went pretty well, except that the Cummins badges slightly got in the way and needed to be moved up about a 1/2-inch in order for the rubber trim to seat properly. And speaking of the fit, contrary to the Bushwacker website, which said that these flares weren’t compatible with aftermarket front bumpers, my front flares were perfectly compatible with my Buckstop bumper. I had no problems at all. 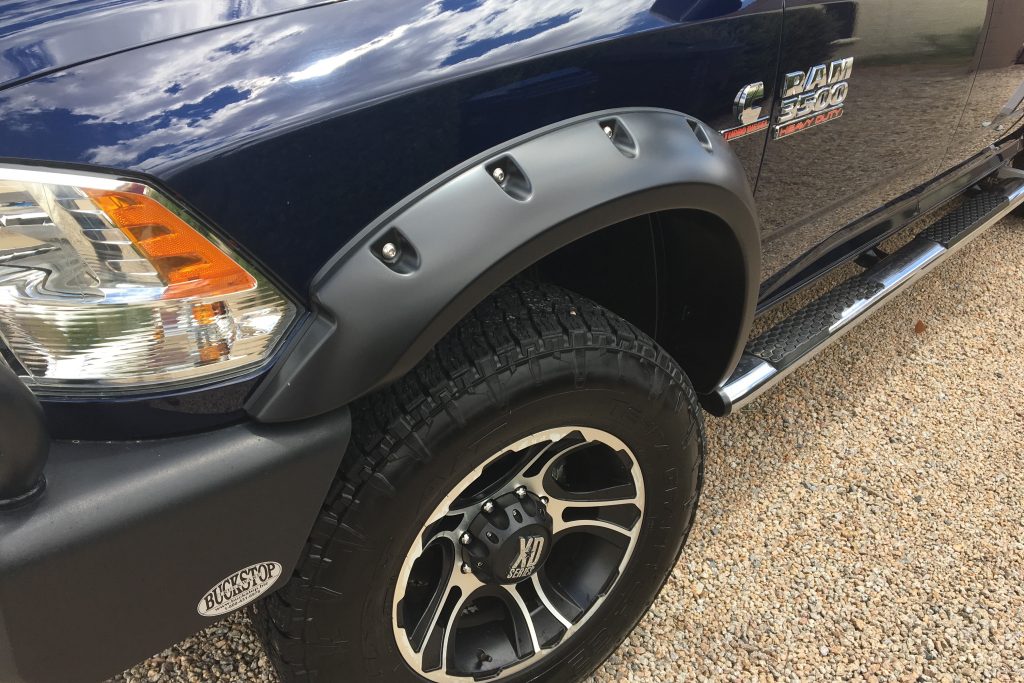 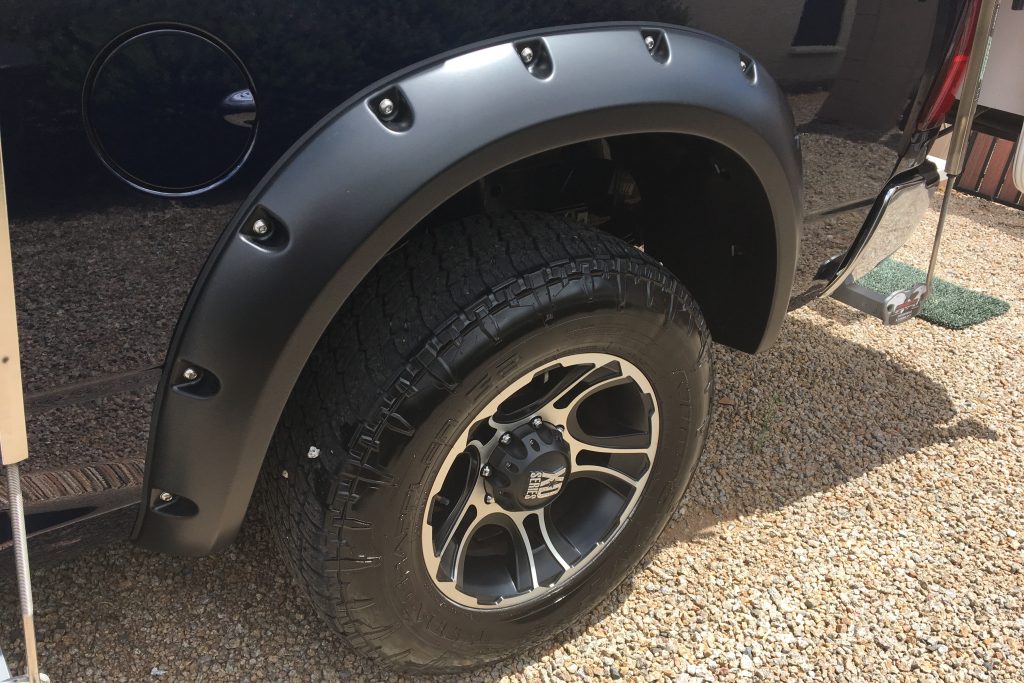 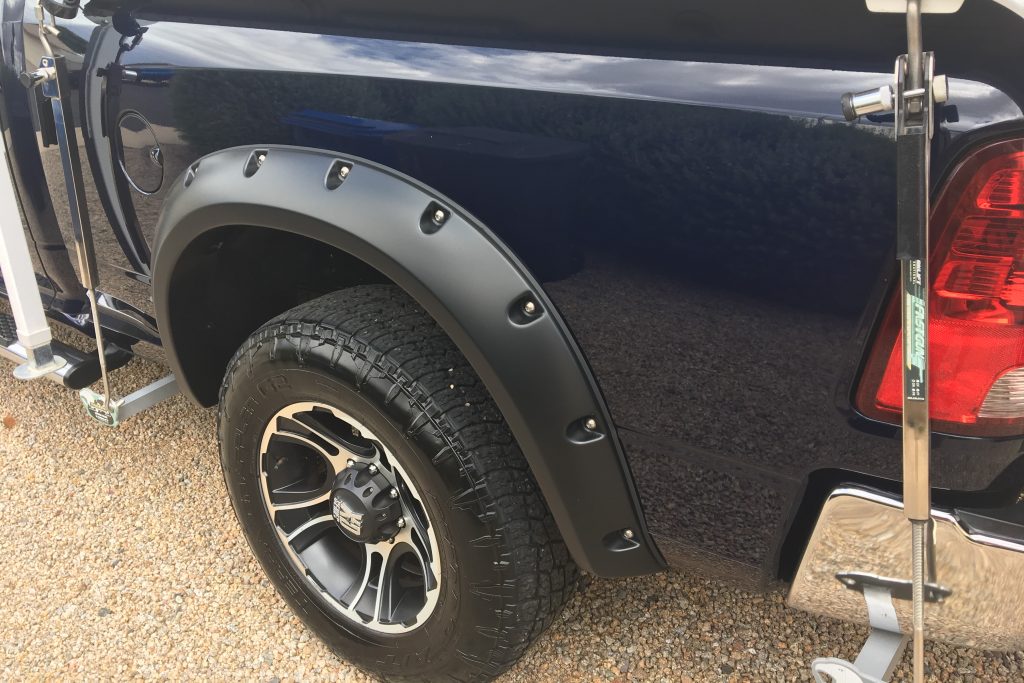 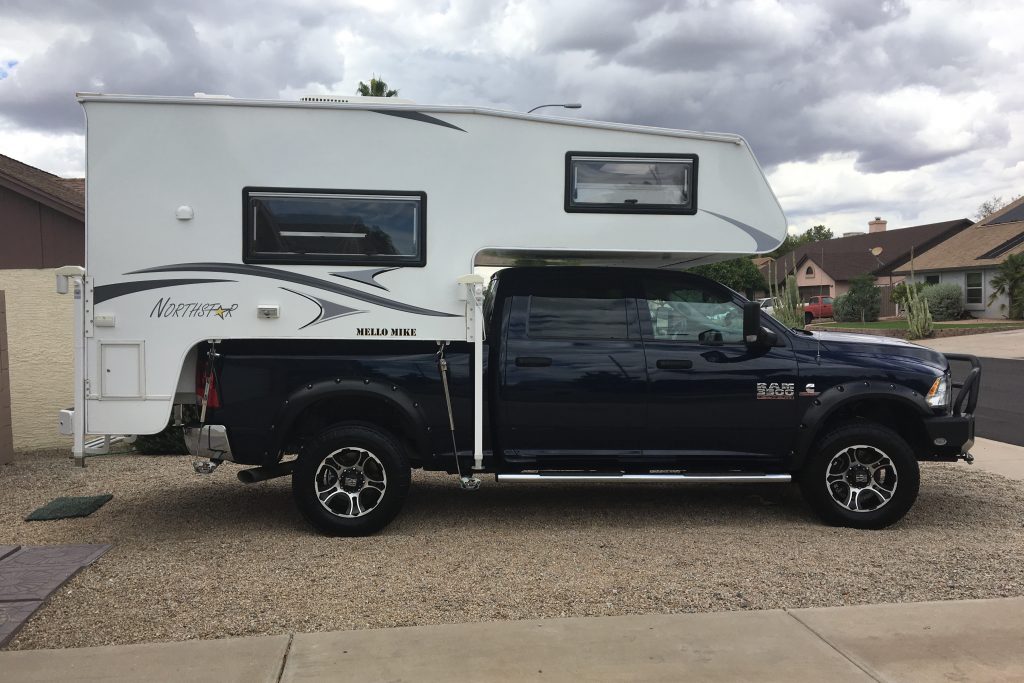 A few more words about the installation. Bushwacker’s instructions were well-written with no major issues. The only item missing from my installation kit was a single pocket washer, not a big deal, though it was one of the washers that mounts with the pocket bolts on the exterior of the flares. The only real discrepancy I noted in the instructions related to the use of the mounting screws. Bushwacker’s instructions call for the use of the mounting screws that came with the kit, but I ended up using one or two OEM screws on the bottom corners of each flare. These OEM screws, which are used on the OEM plastic wheel well trim, are thicker and longer than the enclosed Bushwacker screws and worked better in keeping the Bushwacker fender flares secure. Oh, yeah, one more thing. The location stickers for two rear flares were reversed on my set, so that the flares as labeled didn’t fit. This lead to some consternation and a few choice expletives until I figured out what had happened. Not a big deal, but it’s something to be aware of if you happen to order a set for yourself.

Overall, I’m extremely happy with my set of Bushwackers. They do a great job keeping rocks and mud away from the sides of my truck. The biggest knock against Bushwacker fender flares is their cost. But like anything in life, you get what you pay for. The best price I could find for the matte black style I purchased for my truck was $549 through Amazon.com. I purchased Bushwacker Pocket Style 50921. As for the fit and finish, the Bushwacker fender flares fit perfectly and look terrific on my truck, as better or better than OEM, and that’s the kicker. You’ll be able to buy another fender flare for a lot less money, but they won’t last as long and fit as well as a Bushwacker. How many stars would I give my Bushwacker fender flares? Without hesitation, I would give them a rating of five stars. The fact that they’re made in the USA solidifies the rating even more and makes me feel even better about having them on my rig.

Last week, I had a complete set of wheels and tires installed on my 2013 Ram 3500. I want my truck to be ready and to look good when I pickup my new Northstar Laredo [read more]