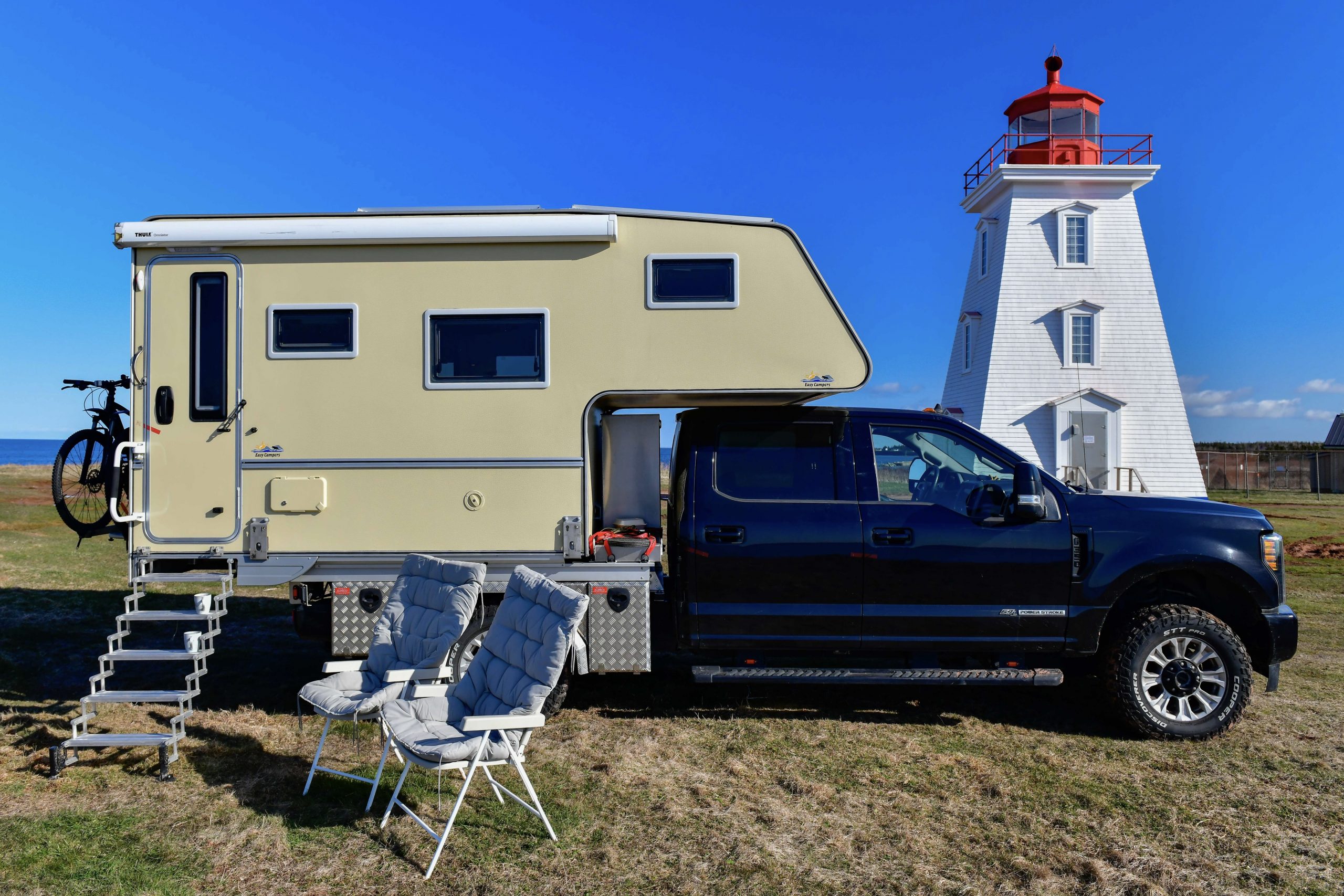 Fellow reader Michael Nyholm recently reached out to us about a German couple, Torsten and Avena Rathjen, who they met last summer while vacationing in Wyoming. Michael was excited to tell us about this couple’s rig, which consists of a Ford F350 and an Easy Camper made in Sweden. For Michael to be excited about another camper says a lot. He and his wife are the proud owner of a Host Mammoth, one of the biggest and best truck campers on the market. As you know, we love truck campers of all shapes and sizes whether they are made here in North America or abroad. Truth be told, when it comes to construction, Americans can learn a thing or two from our European counterparts and a few companies, like nuCamp, Overland Explorer Vehicles, and BundutecUSA, already have. Fortunately, Torsten was kind enough to answer several questions about his US-European truck camper combo. In this exclusive interview, Torsten explains the differences between European and US campers in general and his experiences in it while exploring North America.

Thanks, Torsten, for talking with us. Can you tell us a little bit about yourselves? Are you retired or currently working? What do you do for a living?

Torsten Rathjen: We are a German couple ages 57 and 60. We moved to Sweden six years ago and sold everything we had in Germany. There, we live in the forest two hours east of Gothenburg. Avena is a midwife and I am an environmental engineer, but from 1995 to 2014, we run our own business selling food supplements and dealing with medicine. Since 2014, we are retired. I sometimes work as a photographer. We have two daughters ages 25 and 27. The younger one lives in Barcelona, while the oldest one moved from Austria into our house in Sweden, together with our granddaughter. She is caring for the house and our dog while we are away.

We love your truck camper setup. Can you tell us more about it?

Torsten Rathjen: We had a Ford Ranger in Sweden and bought the camper in Sweden in 2020. The camper is made by Easy Campers, it’s an 8 LH flatbed SE model. But when we decided to travel around the world, the Ranger was too small and we began searching for a bigger truck. We chose the Ford F350. This truck is not available in Sweden or Germany, so we bought one in Halifax, Canada and had it shipped to Sweden. We modified it. We installed a flatbed and some boxes for storage, and have an extra diesel and a potable water tank. The F350 is a 2019 model 6.7L diesel. The camper is a true four-season camper and handles winters exceptionally well, as it was built in North Sweden. It has heated floors, the camper can be heated while driving the truck. We also have a 400 watt solar power system. This is now a perfect combination for us.

Do you live full-time in your rig?

Torsten Rathjen: No, as we have our lovely house in the forest in Sweden, we prefer to travel to south Europe in winter and to enjoy the Swedish summers. Our current trip now is a three to four-year expedition, so for this time being, we live permanently in the rig. 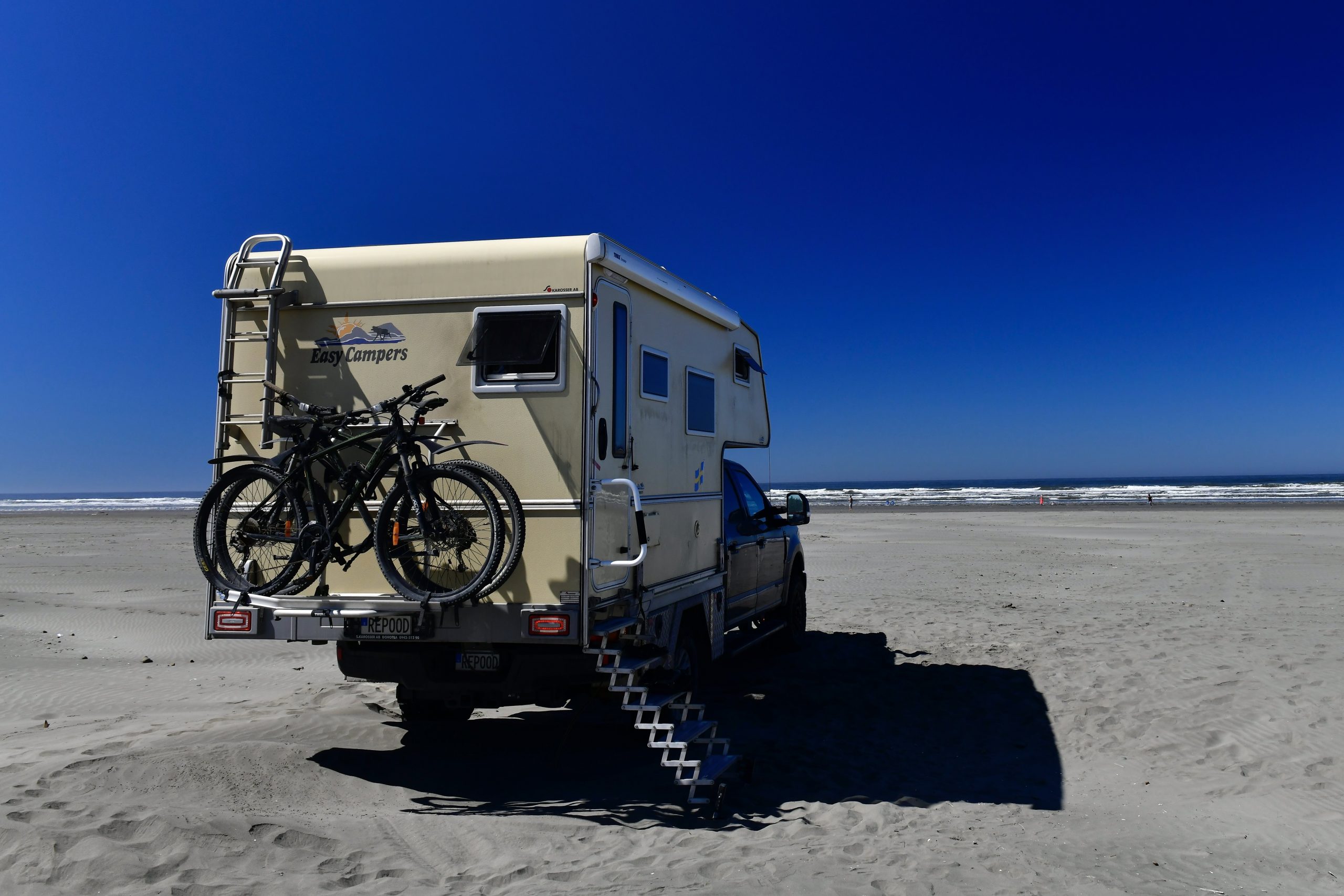 What mods, if any, have you made to your truck camper? Or is it all stock?

Torsten Rathjen: Not much to the camper, though we had to modify the truck. The stock F350 was not allowed to drive on Swedish roads without significant changes. It is classified as a truck there rather than a car and needed to have orange lights on the side and on the roof. We are not allowed to drive it faster than 50 miles per hour. Besides that, we installed the flatbed, and the four underbed boxes for storage purposes. The bed has an extra 45 gallon diesel tank and an extra 35 gallon fresh water holding tank. We also installed an air suspension for the truck.

What features about the camper do you like best?

Torsten Rathjen: The heated floor. For example, we can set a cabin temperature for 70F while driving on the road. When we stop—even in deep winter—we can enter the cabin at a comfortable 70F. While parked or camper, we can use a propane furnace which runs well. We also love that we can drive anywhere—the Ford F350 is a beast and the 4WD is magnificent. The truck is small enough (25 feet) and has a weight of about 5,000 kilograms (11,023 pounds). This is small, but enough for us and we can reach places where bigger trucks can’t go. We have a composting toilet onboard, so we don’t need any chemicals and are very flexible with this. We also have an indoor and outdoor shower. Small, but enough for us.

What kind of electrical system are you running in your camper? Do you use solar power and lithium batteries?

What kind of bathroom and toilet does your Easy Camper have?

We have a composting toilet onboard. Absolutely no chemicals are needed, which is fantastic. We have a very basic  bathroom, which has an indoor and outdoor shower, but compared to the US, it’s not very comfortable, but it works. The fresh water tank holds 20 gallons.

Having traveled around the world, what differences have you noted between your European camper and those that you’ve seen in the North America?

Torsten Rathjen: The campers in North America are much bigger and more comfortable, but less flexible and need either a generator or to be connected to electric power. In Canada and US, slide-in truck campers like ours are quite common, but in Europe there are very few. So our combination is unique. Most RV’s in North America are extremely heavy and long, so only suitable for paved roads and RV parks, I guess. We can park anywhere to stay overnight. Anyway, everybody has own preferences and it is good that there is such a variety to choose from. 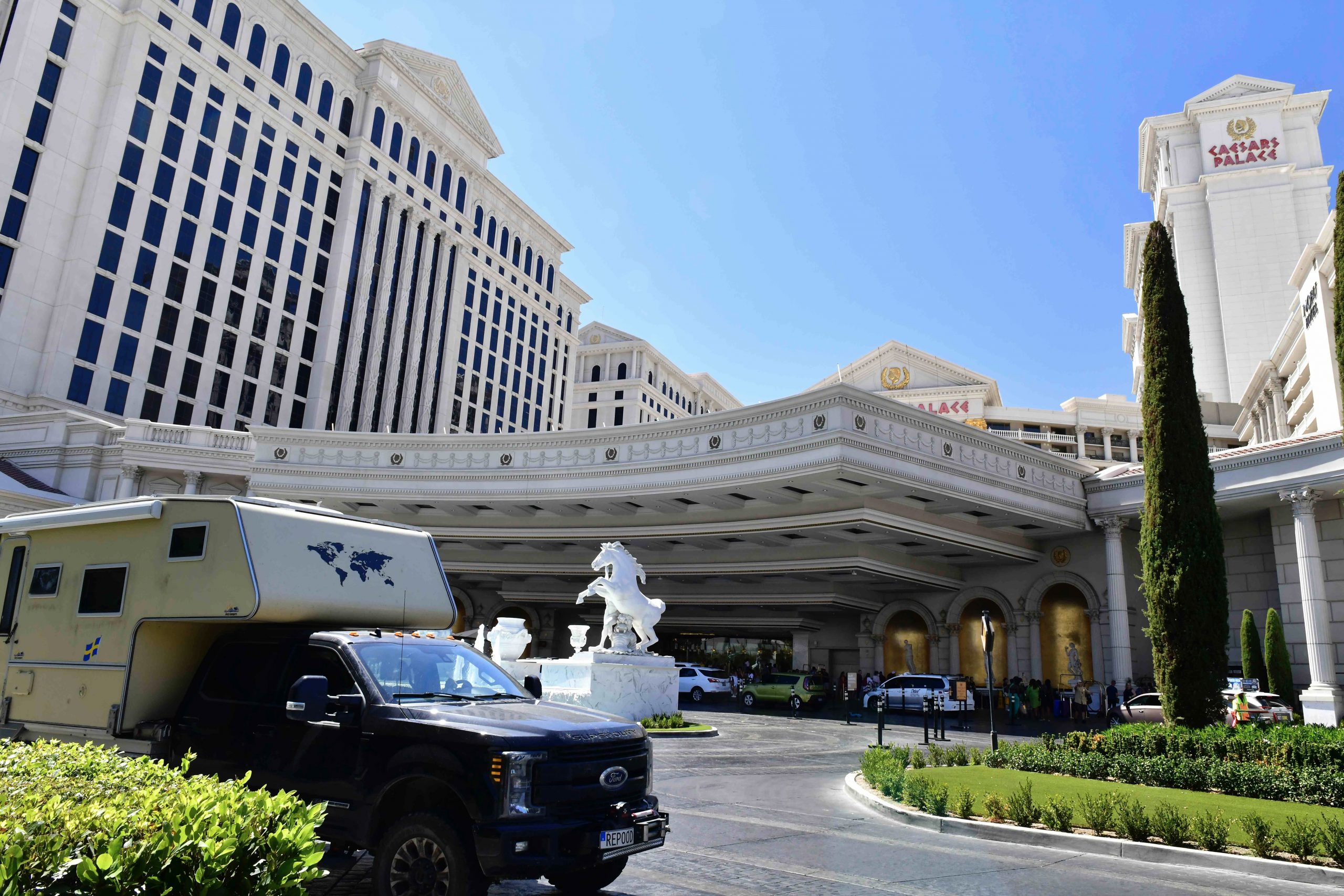 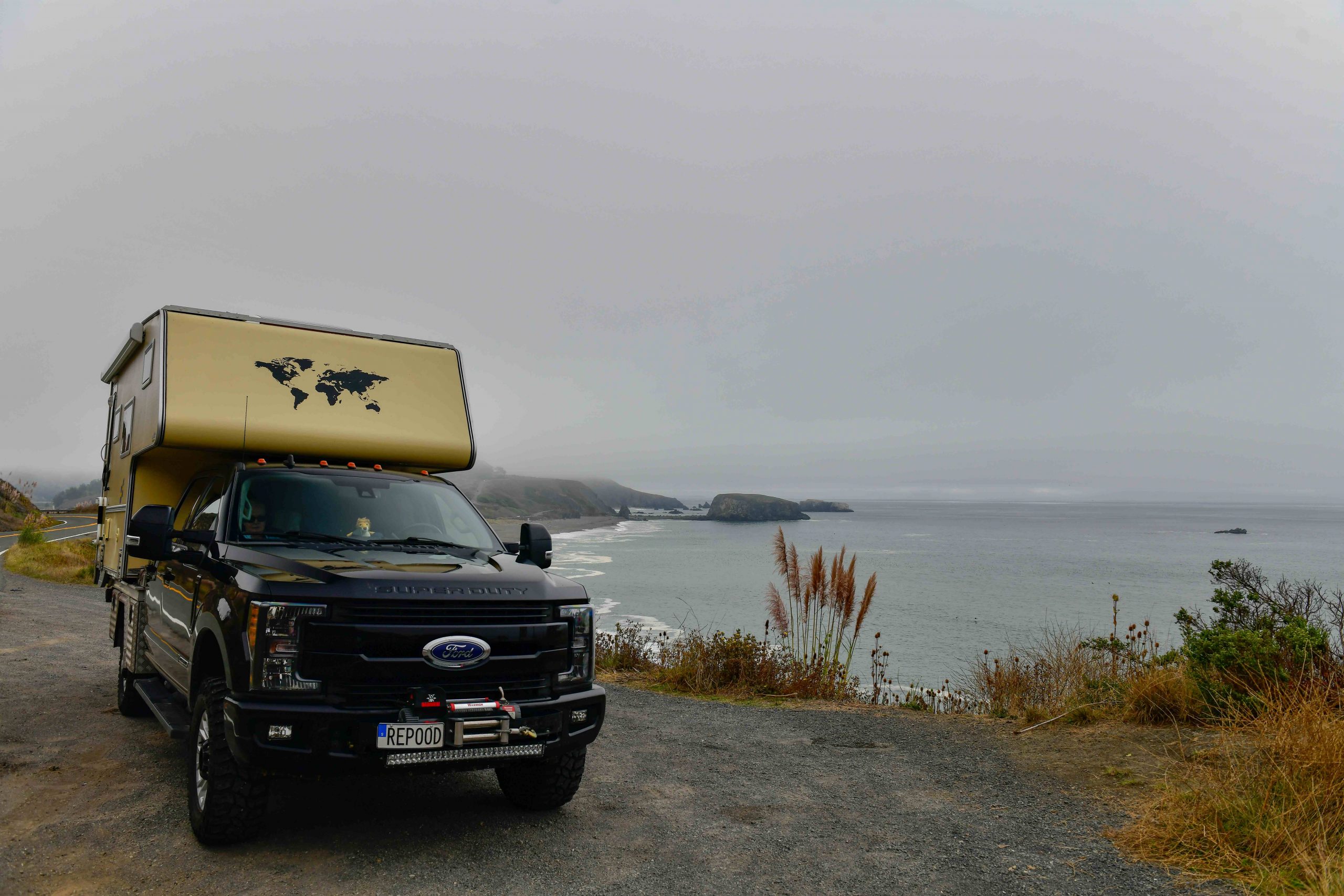 Are you over or under your truck’s GVWR/payload?

What kind of mileage are you getting with your setup?

Torsten Rathjen: When driving on a highway without steep hills, we are at 16 mpg. In the mountains, it goes down to 14.5 mpg.

What size wheels and tires does your truck have and what inflation values do you typically run? Do you ever air down?

Torsten Rathjen: We have Cooper 275/70R18 Discoverer AT3 tires. The pressure is about 50 psi in the front and 80 psi in the rear. So far, we haven’t had a need to air down, but in the desert, we will need to do that. We have a so called Tyre Spider onboard, we bought this tool in Australia. The Tyre Spider can deflate or inflate one or all four tires at the same time. It comes with a 12 volt compressor, so we are independent from any other option which would anyway not be available in the desert. We highly recommend this tool.

Can you tell us where you’ve taken your rig so far?

Torsten Rathjen: As we imported the F350 just before Christmas 20212 and needed to modify it, we could not test it on a long trip before we left Sweden to start the world tour. On our current trip, we started in Halifax, drove through Canada, turned a bit south to Minnesota and North Dakota as it was too cold in Canada at that time. We visited Banff and Jasper, drove north to Alaska, then Vancouver Island. We drove to Washington (Olympic National Park), Oregon, Idaho, Wyoming, Colorado, Utah, Arizona, Nevada and now California.

Seeing that you’re traveling worldwide, what have been your favorite countries and continents?

Torsten Rathjen: We love Australia and New Zealand, but also the tropics in SE Asia. We like Canada, but we simply love the USA most. We really think that the USA uis the best country to travel in—fantastic landscapes, breathtaking national parks—Canyonlands, Yellowstone, Bryce and Zion)—and the people are unbelievably friendly to us, it is unforgettable. In Europe, we prefer the north of Scandinavia, as we love the nature and the loneliness. But also Portugal in south Europe is beautiful. We are excited to see Patagonia in South America as well as South Africa. As we have been in Australia very often, we love to see it again. 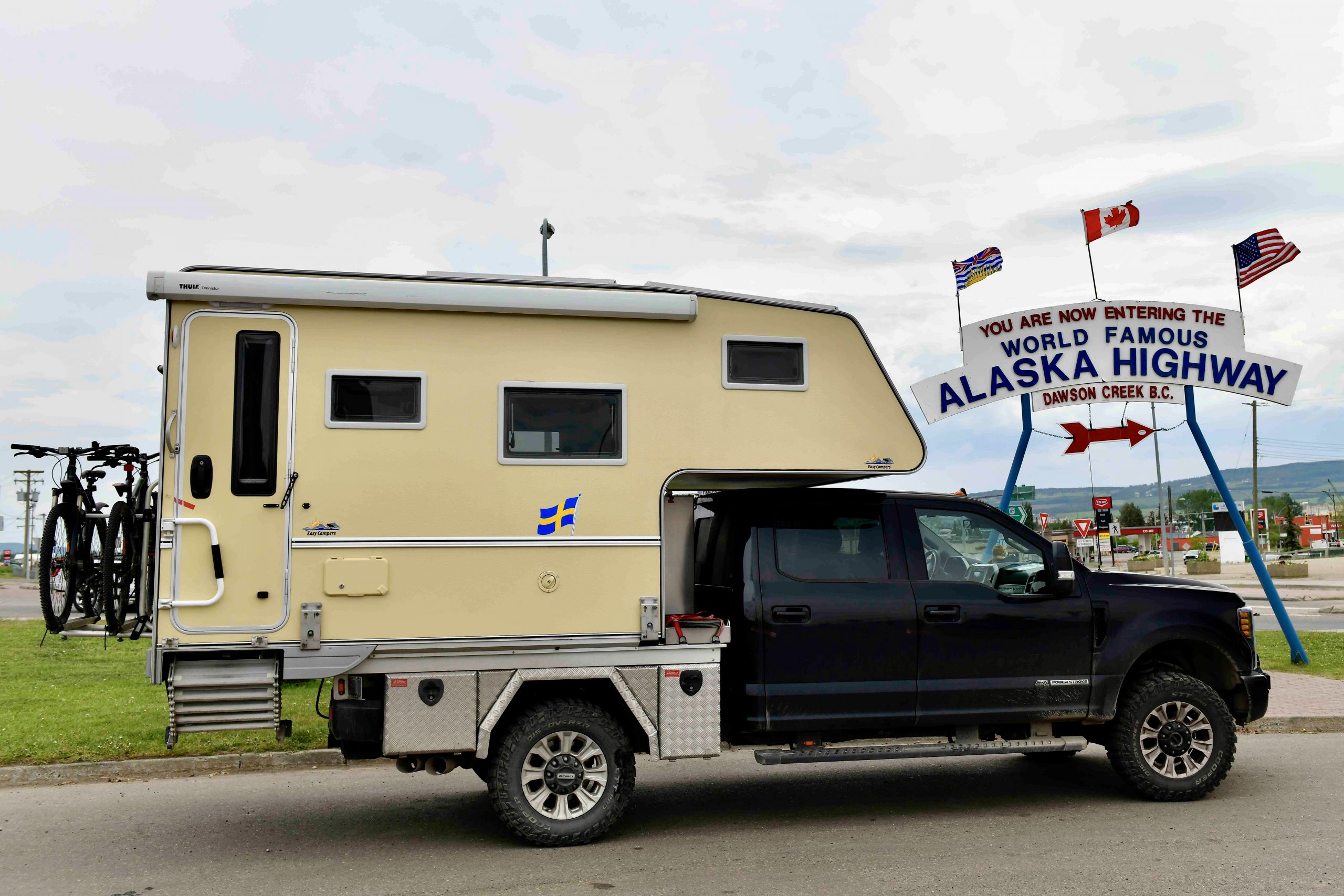 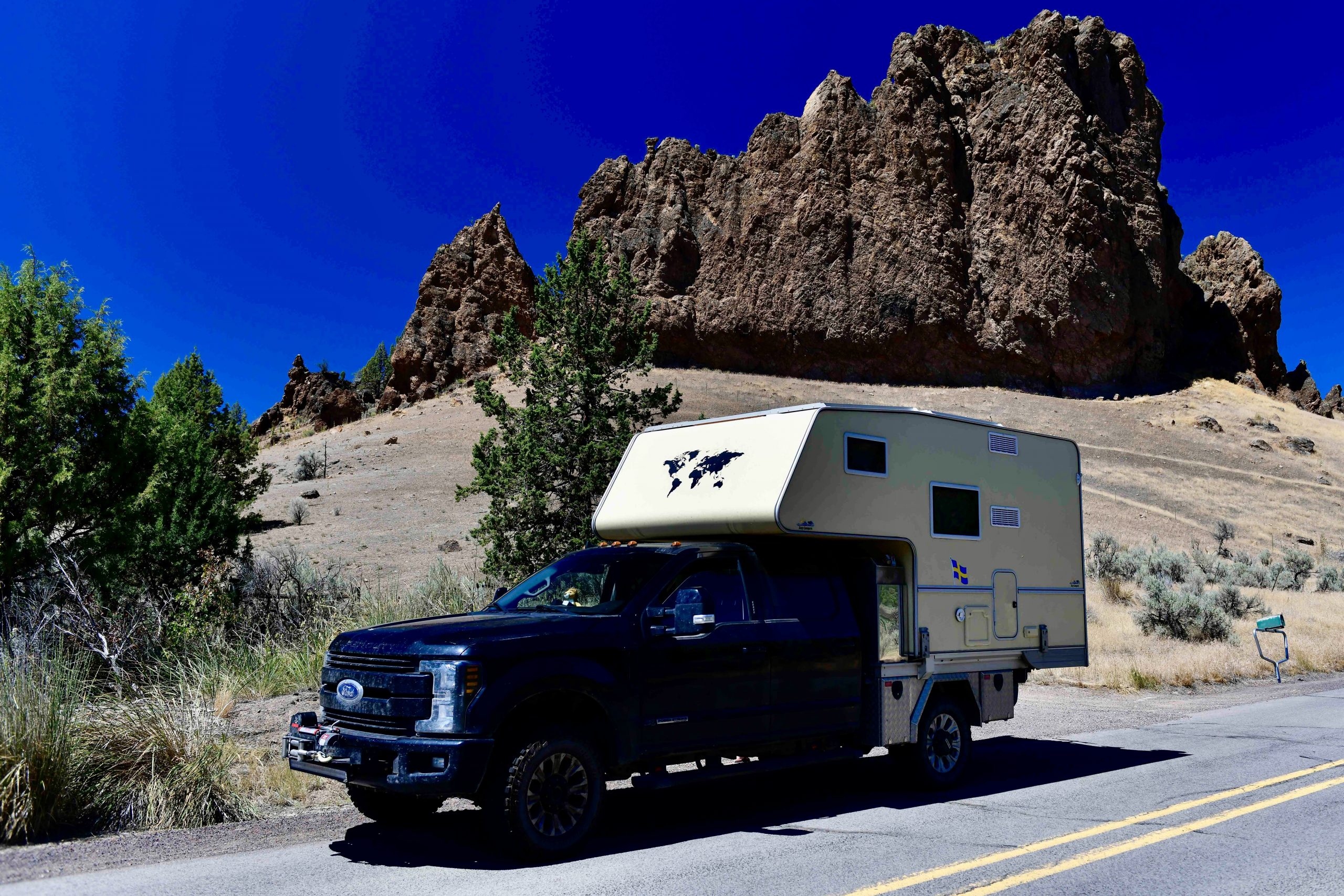 What is the highest elevation where you’ve traveled and camped? Have you ever gotten elevation sickness?

Torsten Rathjen: Yesterday, here in Wyoming, we were at 8,730 feet, and breathing was sometimes a challenge. But the air is so clean and fresh and think that it is only a question of getting used to the elevation.

Have you had any encounters with wildlife that would interest our readers?

Torsten Rathjen: We wanted to see bears, but British Columbia was the only place we saw any. We were often told that we would see lots of them in Alberta, Yukon and Alaska, but not one was seen.

What are your future plans?

Torsten Rathjen: We want to travel for several years, and when we are back home, we will travel in winter to escape the snow and ice in Sweden. We will then be in South Europe: Greece, Spain or Portugal. We went on a nine-month bicycle tour in 2017 from Germany via Austria, Hungary, Slovenia, Croatia, Italy, France and Switzerland. Then we bought a 4WD truck and continued to Spain and Portugal. We love this kind of traveling. Each day is an adventure—every morning we have to decide whether to turn left, right or drive straight or stay for another day.

Do you have a website and/or social media channels?

Torsten Rathjen: I have a homepage www.torsten-photo.com, but don’t have a blog. On Instagram, people can find us on @torstenrathjen.

Anything else you’d like to tell us before we close? Any advice for our readers?

Torsten and Avena: Enjoy your time, explore the world or just your neighborhood—whatever you prefer, do it with passion. 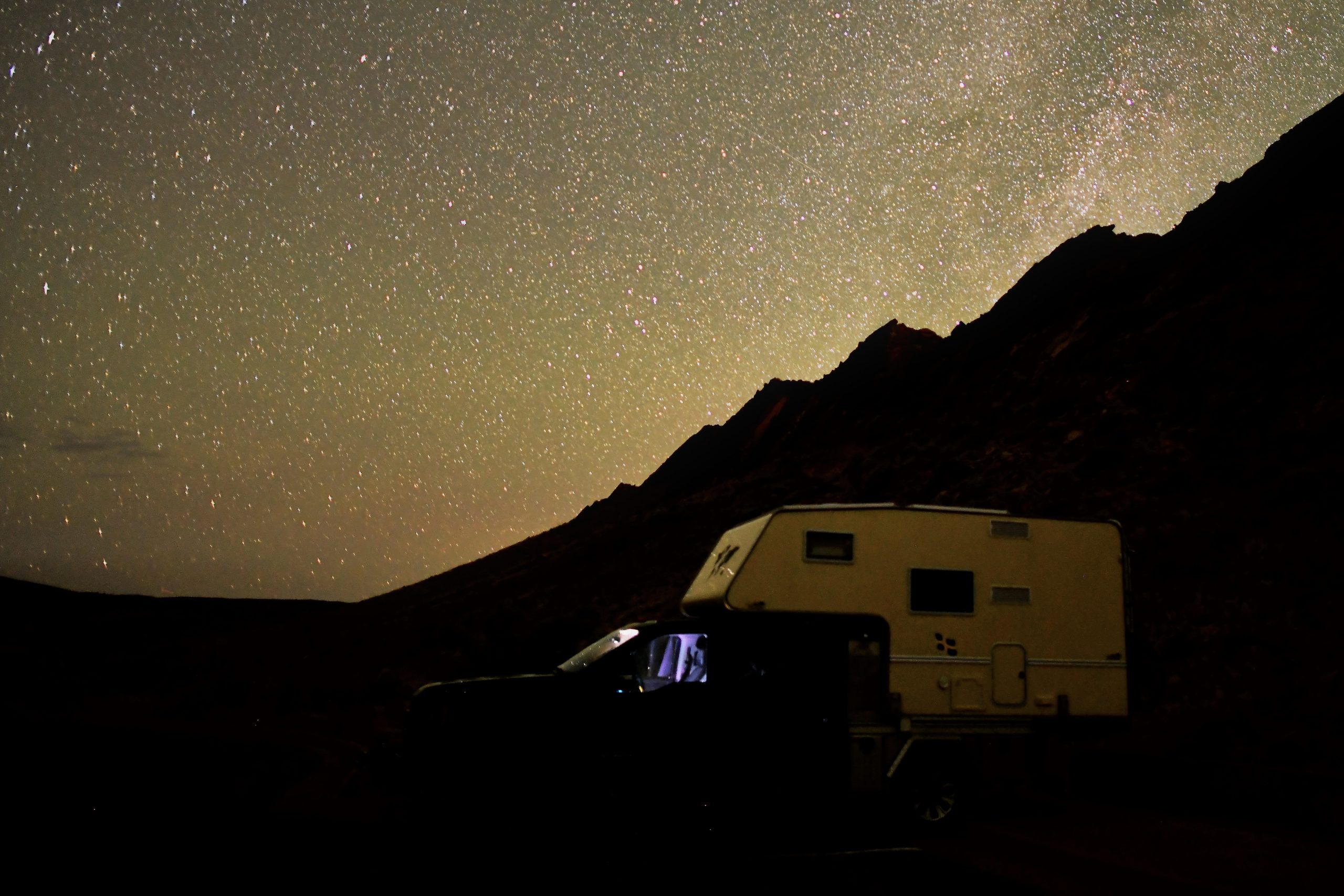 In the Spotlight: Alaskan 8.5 Flatbed Side Entry Camper

If the 2018 Overland Expo West is any indication of the future, the flatbed truck camper is here to stay. Numerous flatbed campers were on display at the annual show, including three brand new models, [read more]