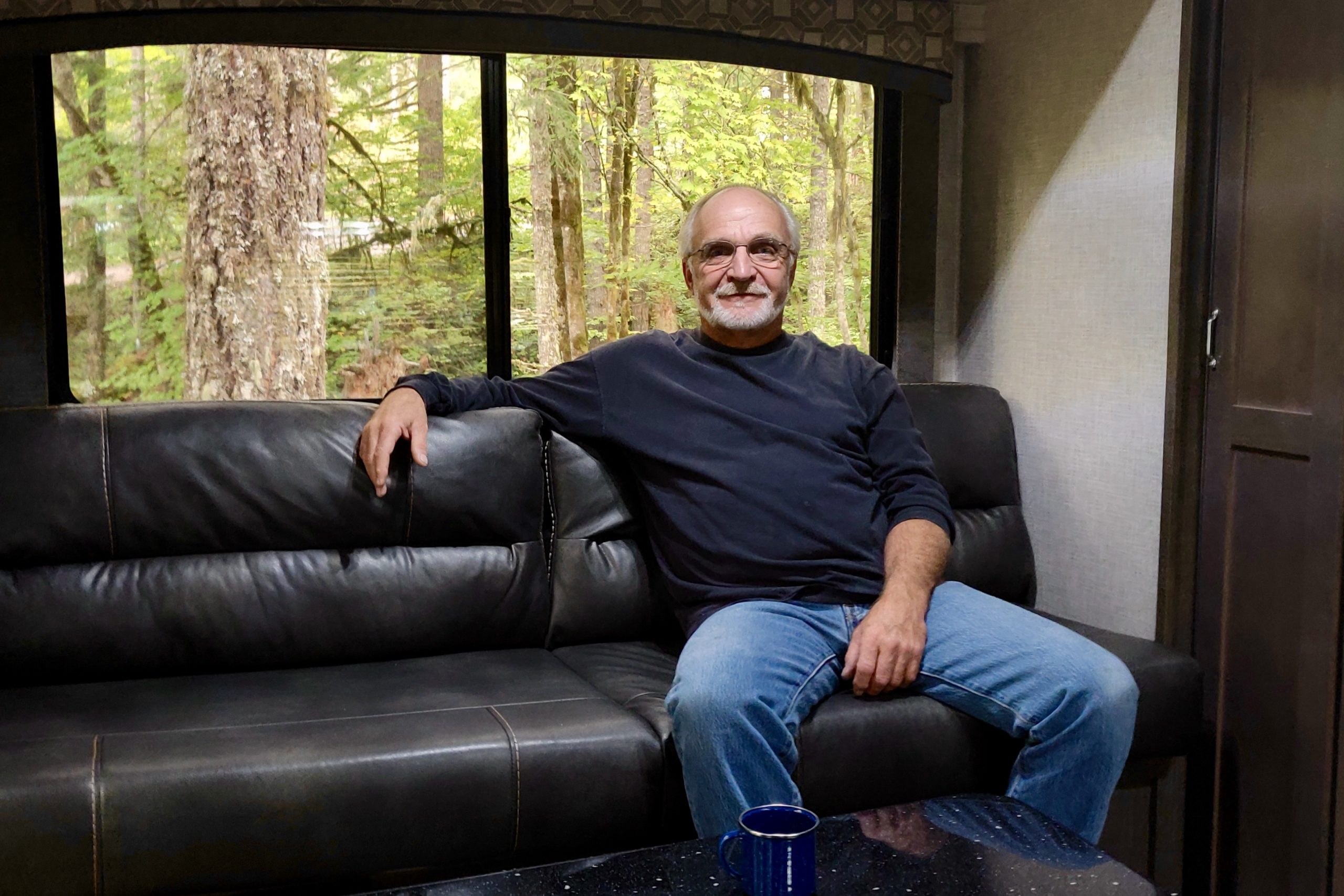 Several months ago, our competitor, Truck Camper Magazine (TCM), issued a “Triple Dog Dare Challenge” to all truck camper companies to objectively use their campers for a weekend and report back to TCM with the results. Several truck camper manufacturers answered TCM’s call with valuable user feedback. Unfortunately, TCM, which claims to be the voice for the entire industry, really isn’t and will only publish “reviews” and stories from companies which pay and advertise with them. Since Host doesn’t advertise with TCM, TCM refused to publish Host’s Triple Dog Dare response (Truck Camper Adventure is different. We cover the entire industry, regardless of advertising status, thereby preserving our objectivity and overall reach). This is Host Industries’ response, which TCM refused to publish, that was submitted well before TCM’s November 9, 2019 deadline date (it was submitted to TCM on October 15, 2019).

Hello everyone, my name is Randall Pozzi. I am the General Manager of Host Industries and I have had the privilege of being at Host for approximately 8.5 years. I purchased my first RV (a truck camper) back in 1992 and for most of the time, between then and now, have owned an RV.

The Camper I chose to use for this challenge was the Host Mammoth 11.6 triple-slide. Arguably the biggest—but by no means the heaviest—baddest, and most expensive (you get what you pay for) truck camper manufactured. If anyone disagrees, I triple dog dare you to come park your camper along side one of ours for a head-to-head comparison.

The Host Mammoth 11.6 was designed to give the most comfortable living space possible in a camper. It comes with two couches, a table that moves side-to-side, front-to-back, and up and down (this allows it to be used as either a dining table or coffee table), an electric fire place, and a 32-inch TV. Our camper was equipped with the optional king bed for even greater comfort and luxury. The Mammoth has a large dry bathroom that easily can accommodate two people and comes with a full-size shower. The Mammoth also holds a whopping 65 gallon fresh water, 52 gallons grey, and 32 gallons black. It has a full floor to ceiling, 3-foot wide pantry, lots of cabinet space throughout, and a very large basement storage area with a 36×80-inch slide-out tray. When I was done loading all our stuff (including Jennifer’s numerous pairs of shoes), I doubt I used even a quarter of the storage space. 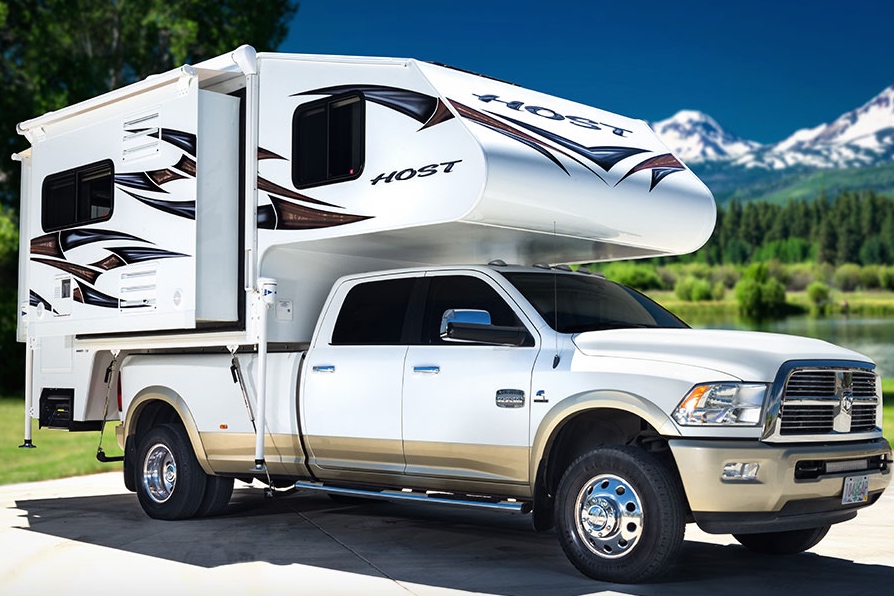 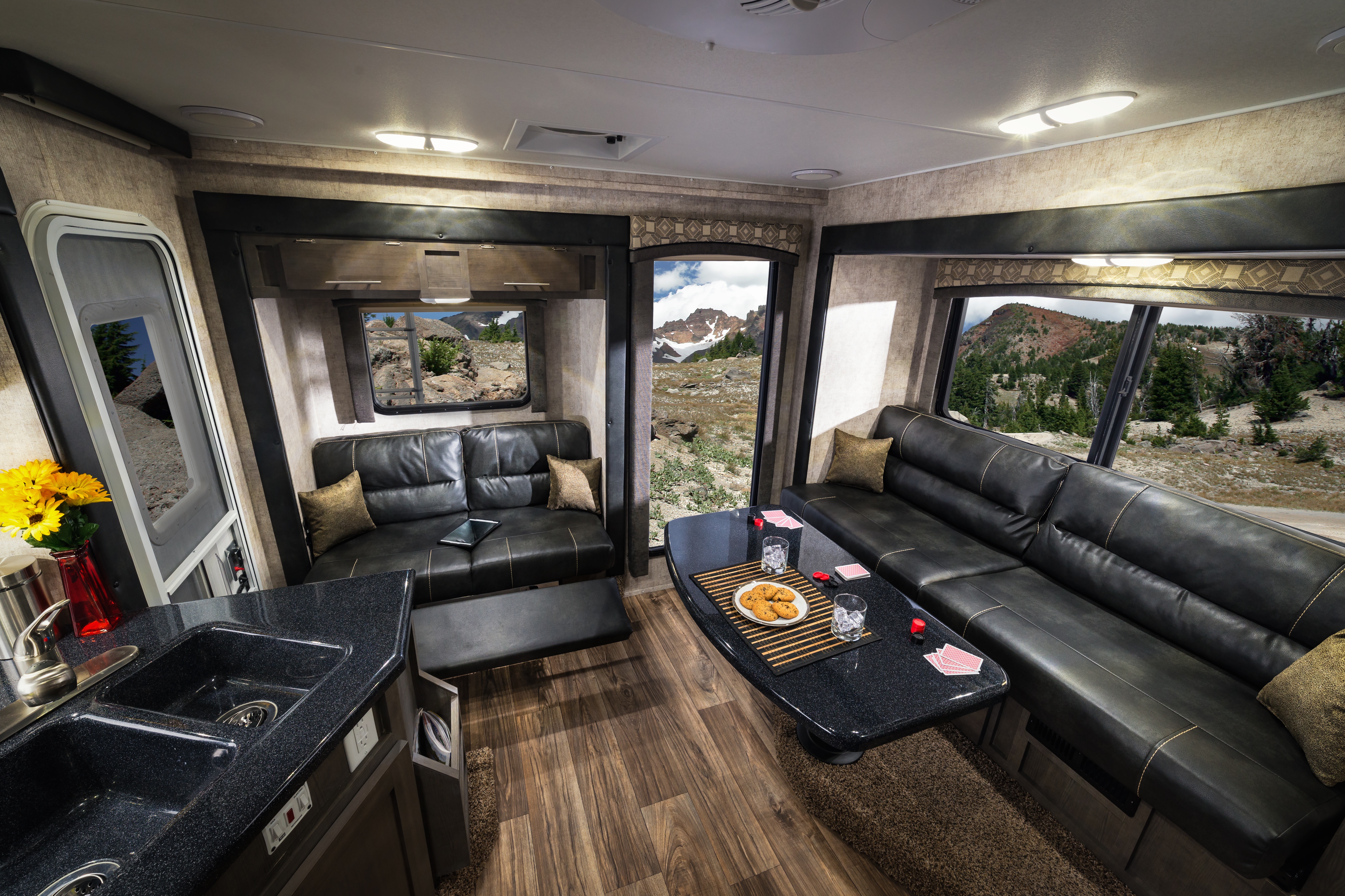 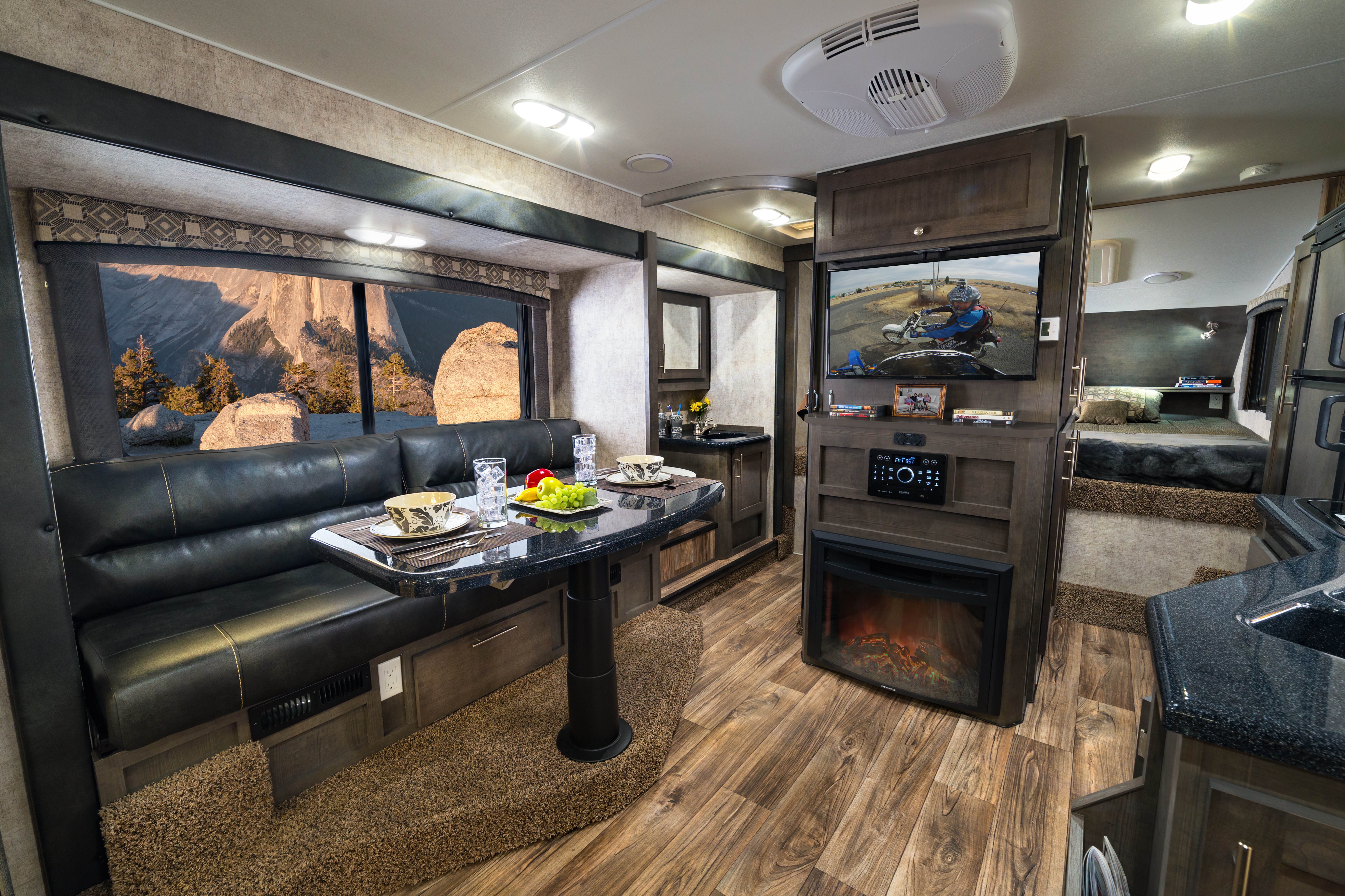 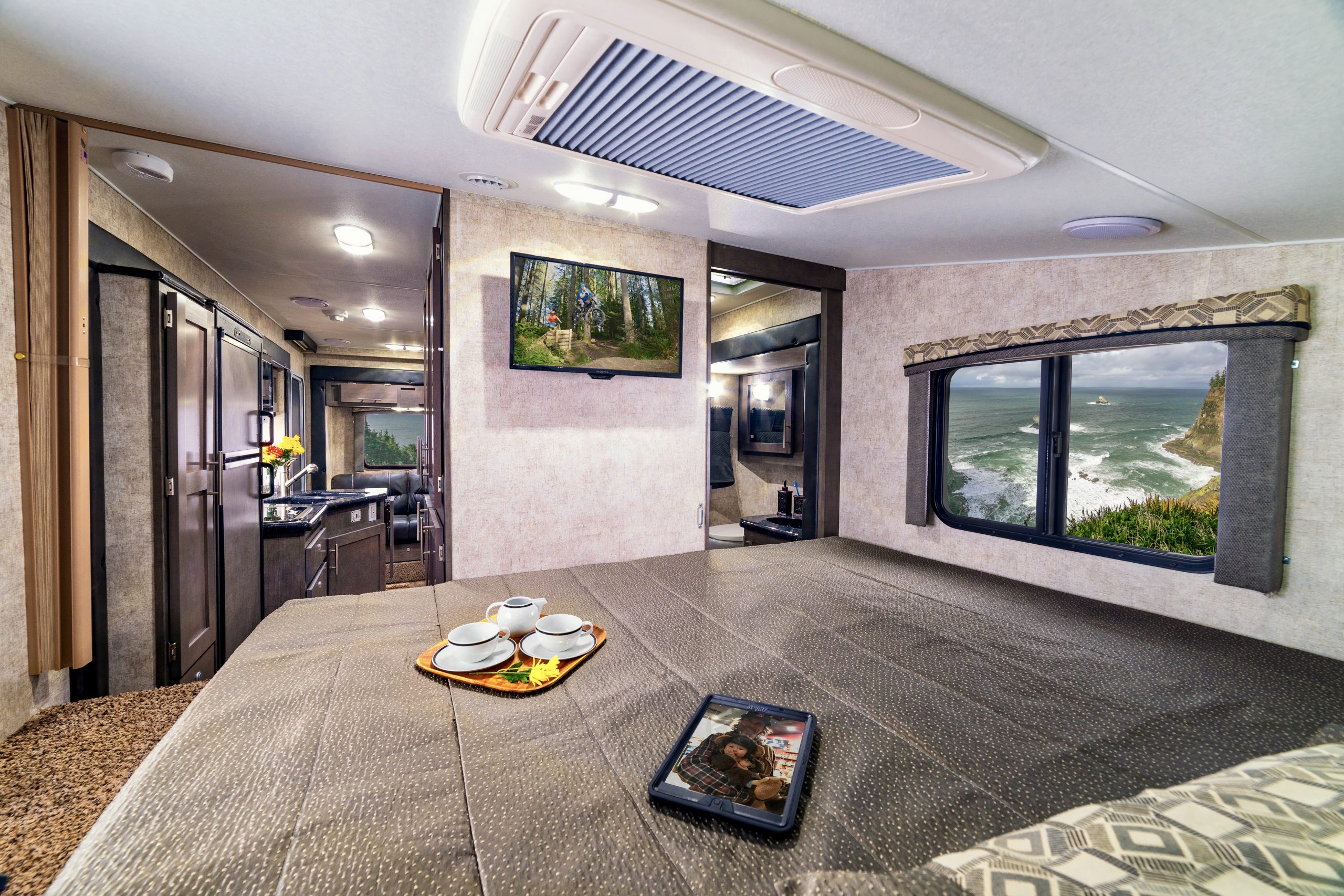 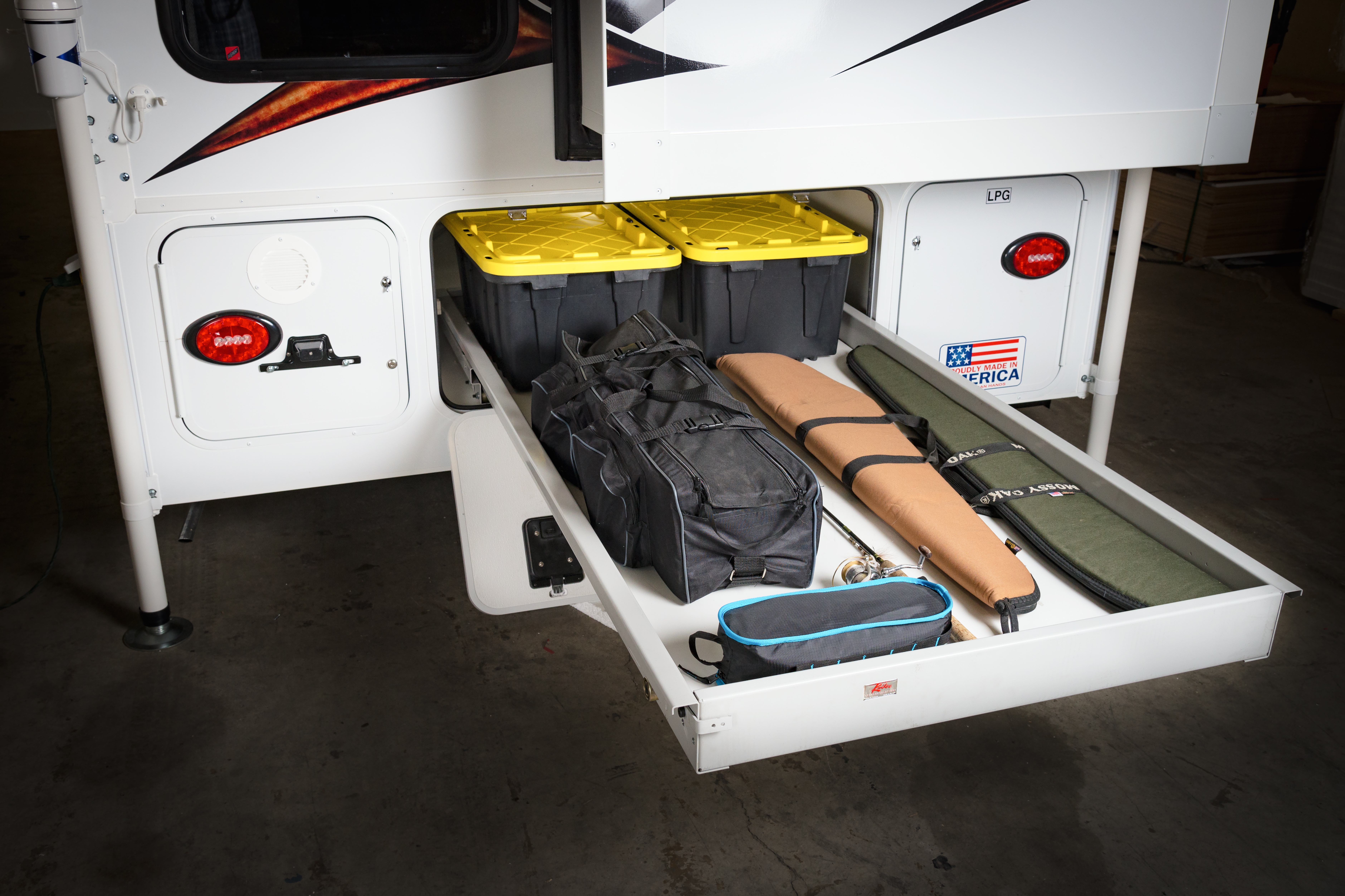 The unit I took for our trip was equipped with the Off-Grid Extreme Package with the 480-amp hour battery bank. In addition, the camper was also equipped with the Nova Kool 9.1 cubic foot, 12 volt compressor refrigerator and no generator. Where the generator normally goes, I carried firewood. 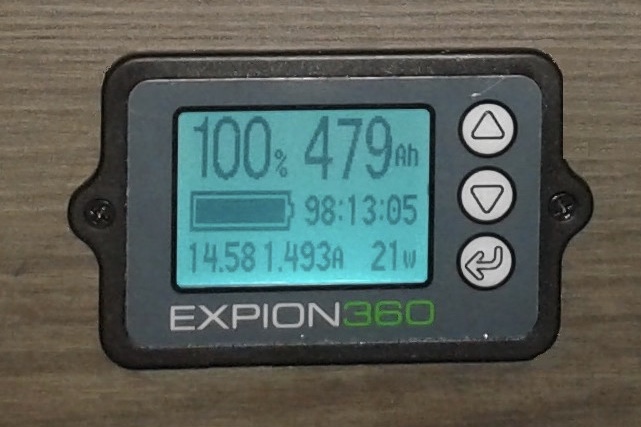 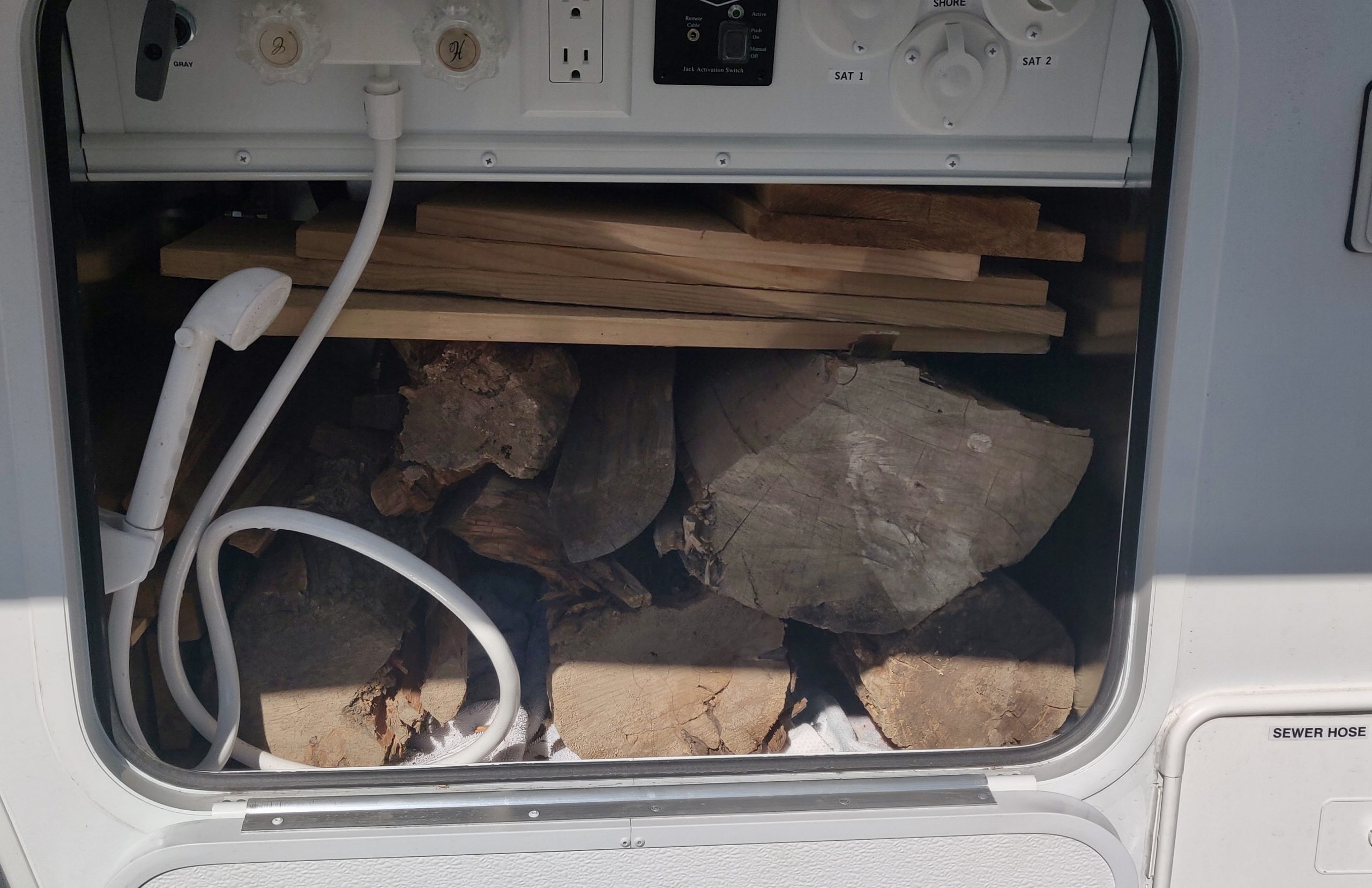 We took the camper to Detroit Lake, Oregon and Silver Falls Park, Oregon. As well as being gorgeous places to visit, we chose to go to these places because both are in the deep forest with massive trees with the canopy easily 100 to 150 feet up. I wanted to give the camper a real test and see how well the Off-Grid Extreme Package’s 510 watt solar power system would perform in the shade.

The first night we arrived at our destination just after dark so the LED strip/area lighting was really nice as it lit up the ground around the camper. I leveled up the camper with the jacks then set up the BBQ (plugged it into the propane system on the camper). We used two of the three burners on the Thetford Euro series cook-top and had a wonderful dinner that included a huge bowl of ice cream (my weakness). Later, we did the dishes, watched a couple of movies and went to bed. Throughout the evening I purposely tried to use extra power….. had all the lights on (all LED), ran the air conditioner for a few minutes to see how much draw it was taking (approximately 86 amps) but it was around 40 degrees outside, so I turned the furnace back on, water pump, TV’s and the 12 volt compressor refrigerator, etc… For those who are wondering, the fridge draws between 3 to 5.2 amps per hour. 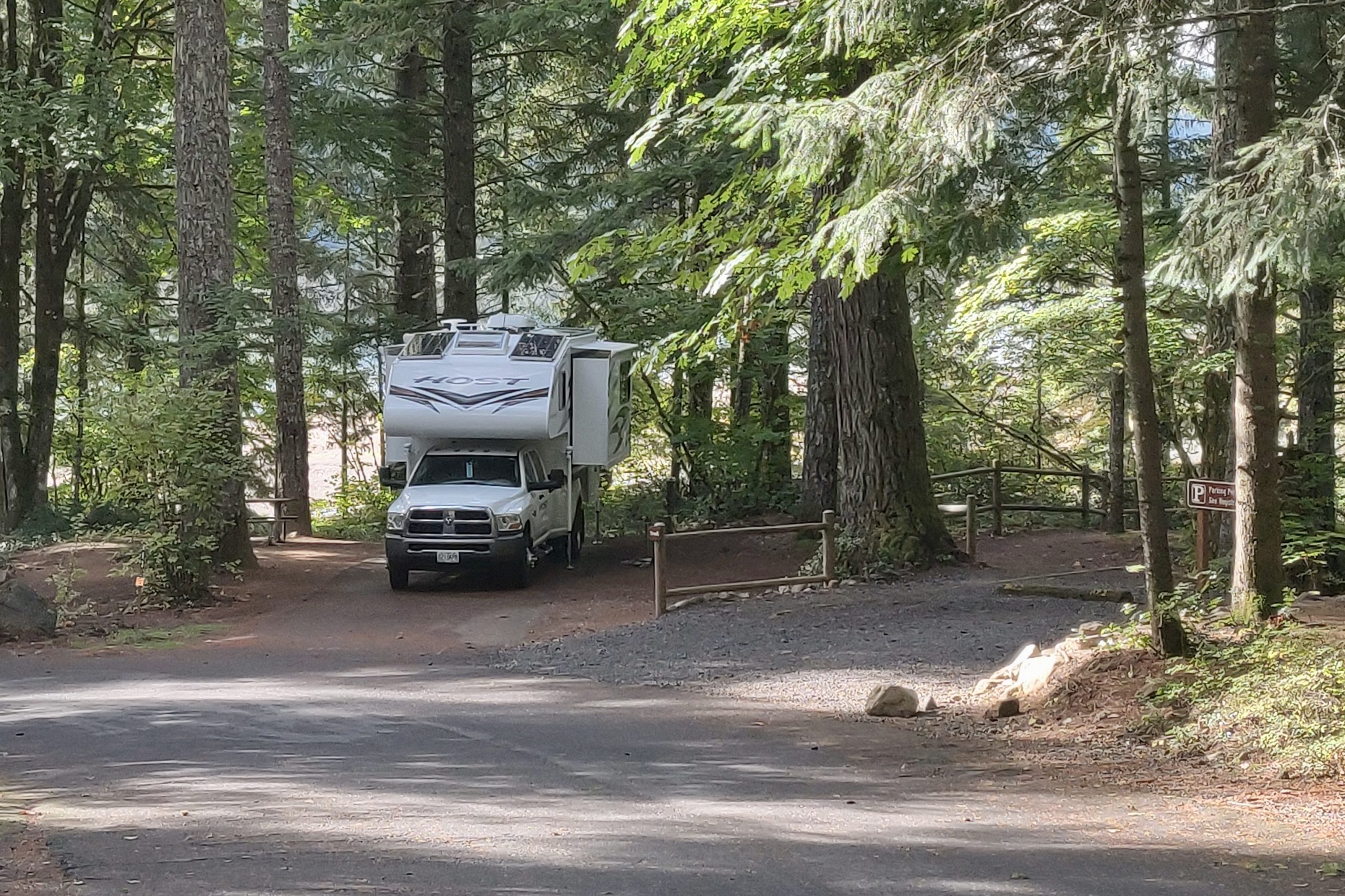 At bedtime, our batteries were at 89 percent. The next morning 79 percent. About mid-morning we drove about an hour to Silver Falls Park and went on a 5.5-mile hike through the majestic rain forest and beautiful waterfalls. A must see if you are in Oregon. It is so beautiful! Again, I parked in the trees to minimize the effect of the solar, but the batteries did come up approximately 10 percent during the day. Late that afternoon, we drove back to Detroit Lake and back to the tall trees. We freely used all the electrical items including the microwave and I also brought along a portable induction cook-top, so I could see the amp draw (approximately 85 amps) using that appliance. 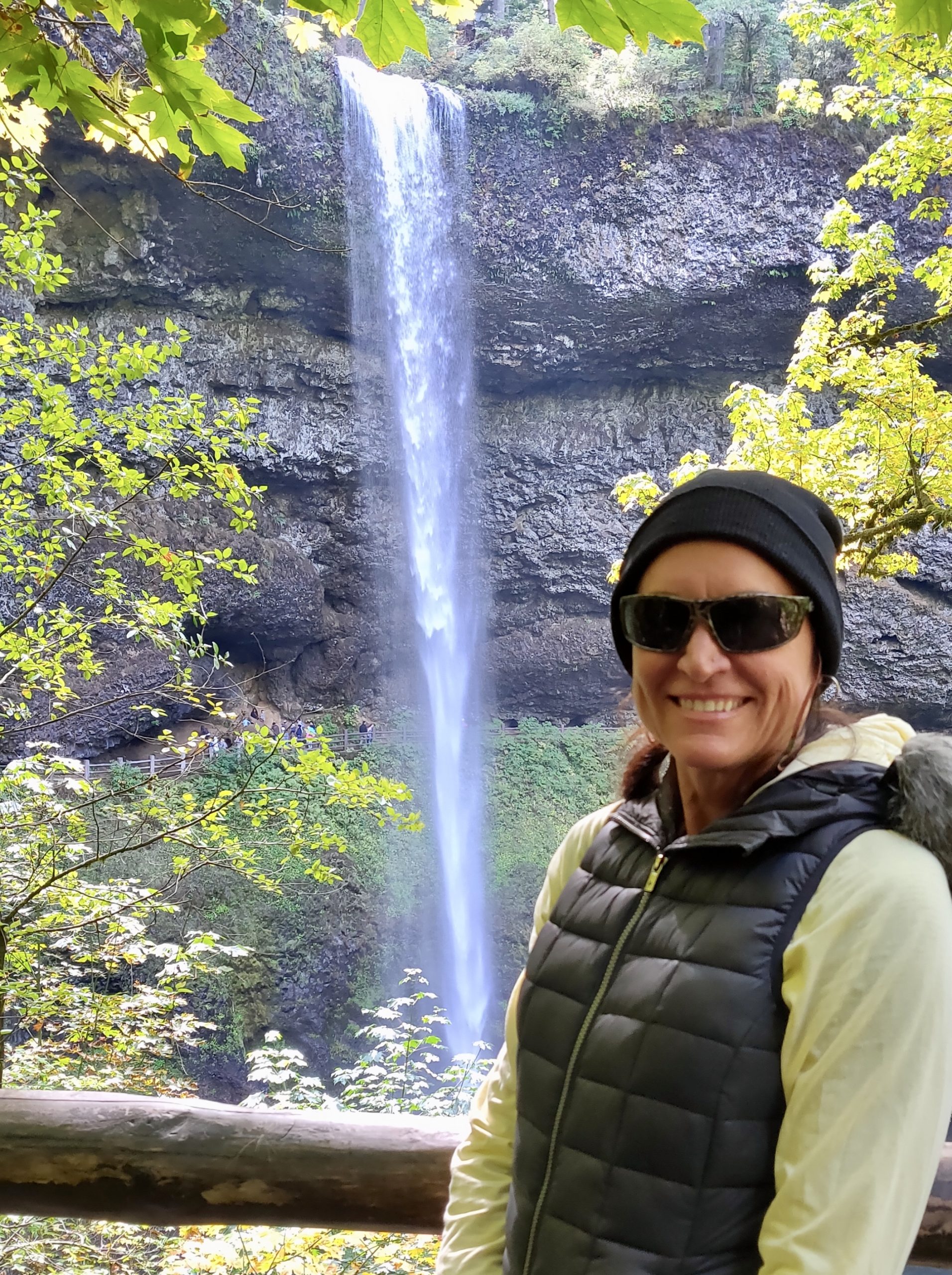 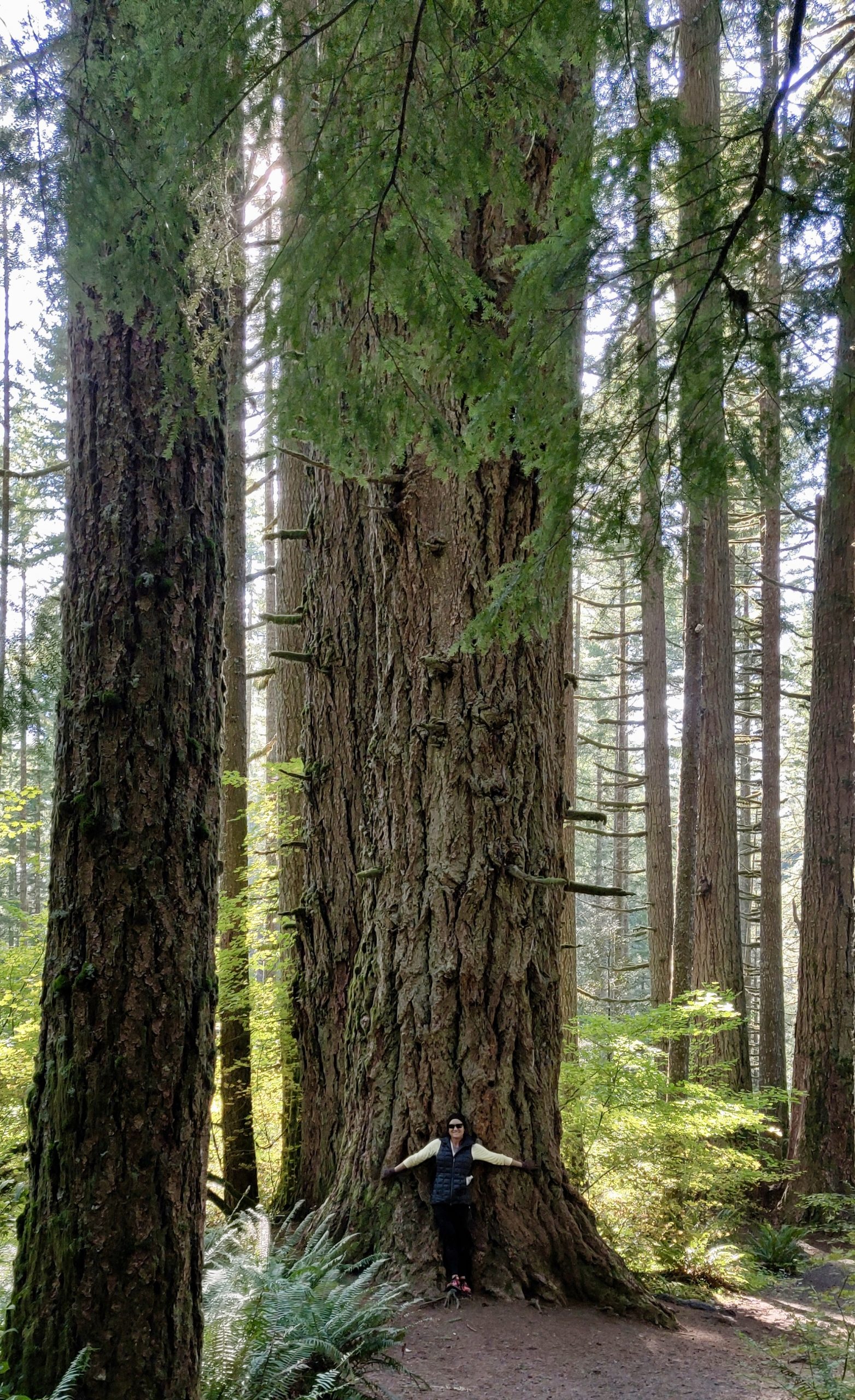 By Sunday morning, I had managed to get the batteries down to approximately 66 percent. Around 11:00am we started our little over an hour drive home where I parked the camper in the sun and by dusk the batteries were already back up to 97 percent. So in summary, the Off-Grid system worked really well, we had plenty of power and we didn’t need a generator.

I think the real purpose of TCM’s “Triple Dog Dare” was so the manufacturers could see the camper through the consumers eyes and say, “gee, I wish my camper had this or did this.” Overall, I do think that our campers are over the top, but we do have a few items I think we need to address. In the bathroom, by the time Jennifer and I hung up our bath towels, there was nowhere to hang a hand towel. In the Kitchen, because the Thetford cook-top is a drop-in, there was no bar in the front to hang a dish towel. I would also like to see us make the flip-up kitchen countertop extension a little wider. And when sleeping, the little light on the USB power ports next to the bed were too bright and a little obnoxious, all items that we can easily address in the future.

In conclusion, the Host Mammoth 11.5 triple-slide truck camper gets an A++ grade. It is more than just a “Weekend Warrior“ camper. It is a camper our customers can and do take for long, extended trips, comfortably. 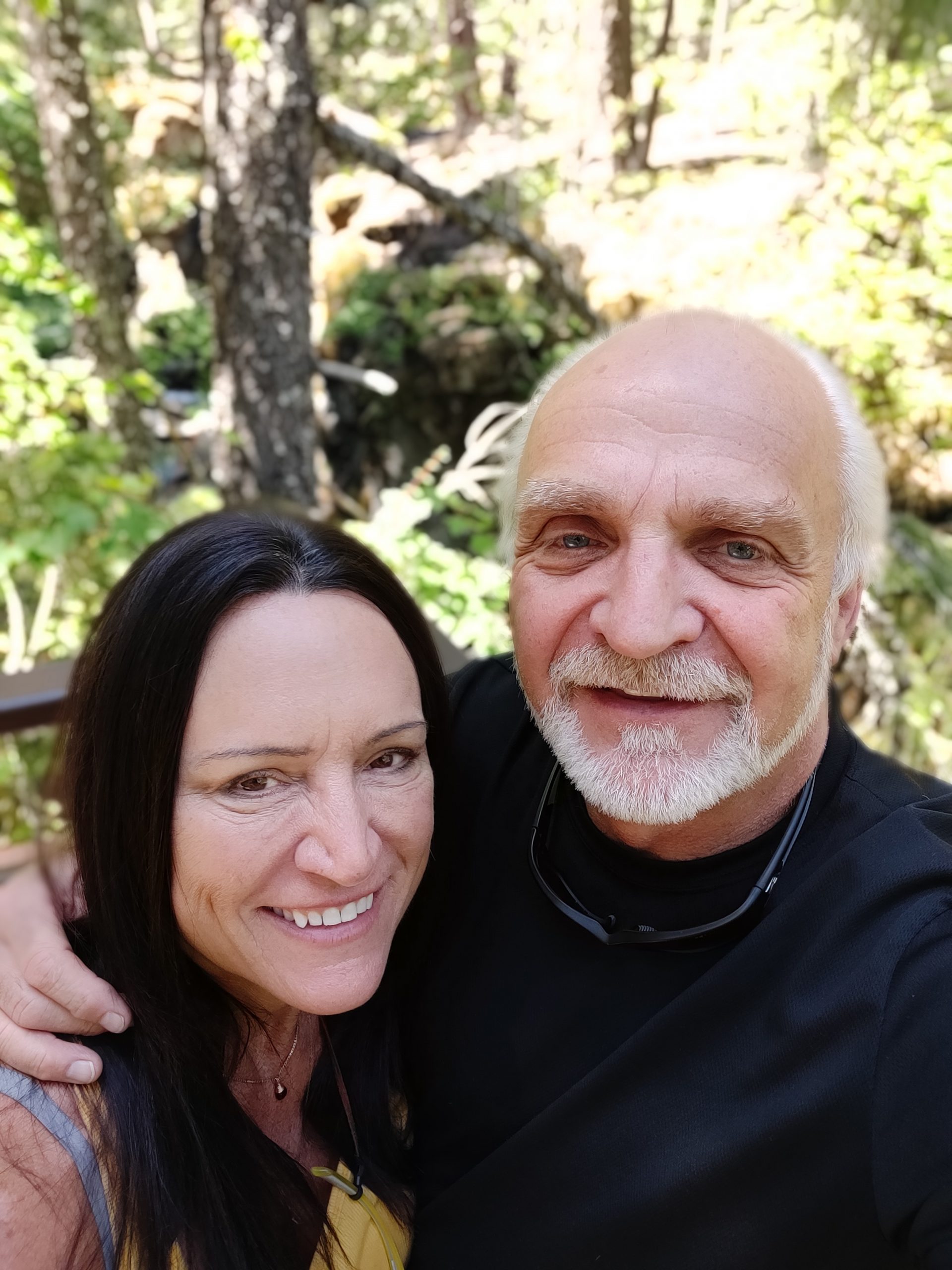 Nimbl Vehicles will reveal its new carbon fiber Evolution camper at the 2022 Overland Expo West, 20-22 May. To celebrate the big change, the company will be displaying the updated camper on a new platform, [read more]

A product doesn’t need to be flashy or new to serve an important function in your truck camper rig. Such is the case with the Xantrex LinkLITE, a 12 volt battery monitor first introduced in [read more]