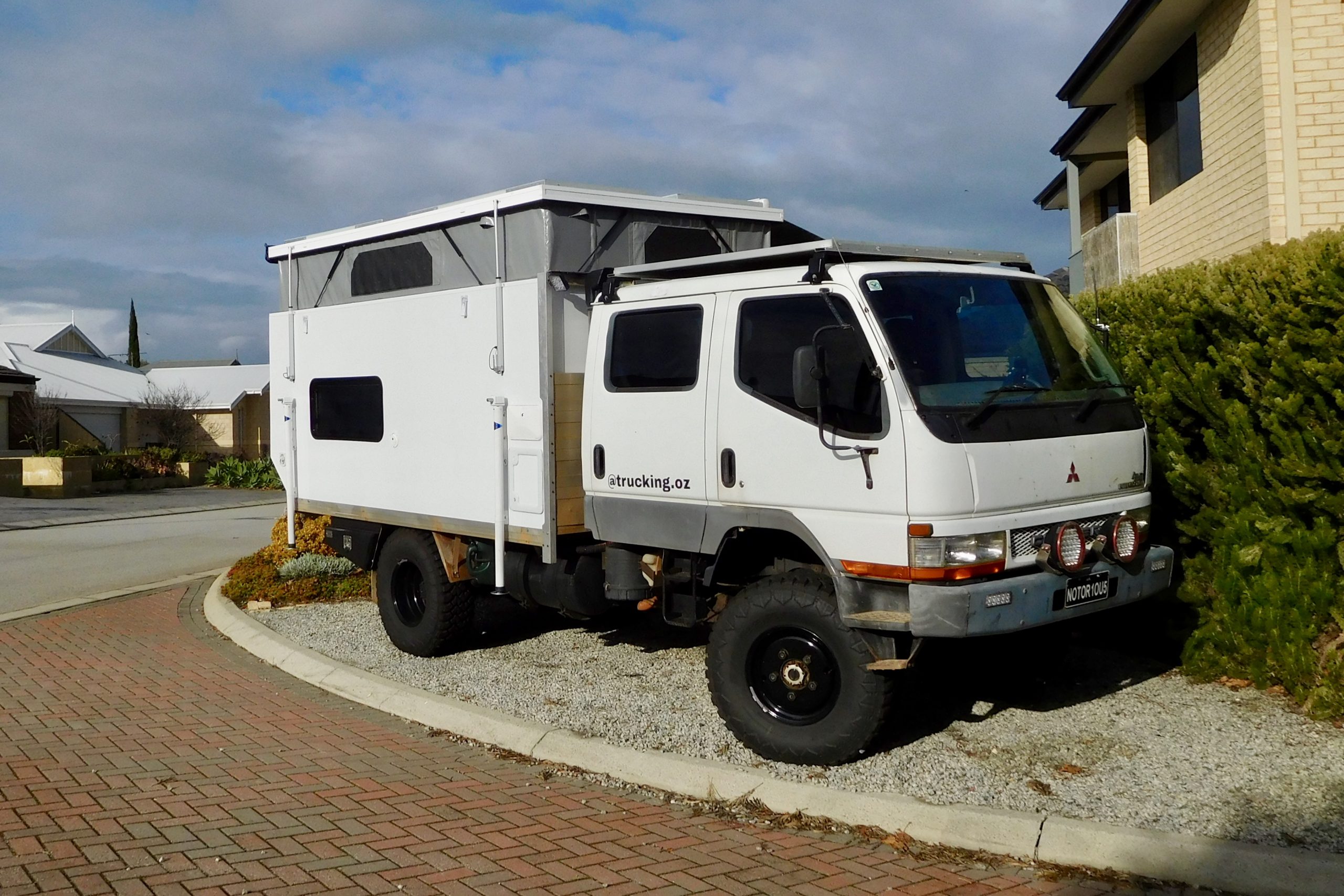 The comparison can’t be helped. When we first saw this rig on Instagram we couldn’t help but compare it to an EarthCruiser. Built by Orios Zavros, of Perth, Australia, this homemade truck and camper incorporates all that’s great about the EarthCruiser without the sticker shock of actually buying one. A real EarthCruiser will set you back $350,000. Ori spent $17,000 on the camper, plus another $30,000 for truck, an eye-popping savings over $300,000. Of course, Ori devoted a lot of time and effort to the project, but when you build a camper like this, it truly is a labor of love. He knows every square inch of the rig and will forever have the satisfaction of knowing he did everything himself. To learn more about this impressive build and what inspired him to build it, Ori was kind enough to answer several questions.

TCA: Thanks, for taking the time to talk with us, Orios. First tell us a little about yourself? Where do you live and what do you do for a living?

Orios Zavros: I live in Perth, Western Australia, with my wife and two children. I am an Automotive Electrician by trade and run my own business.

TCA: We love your rig. It looks a lot like an EarthCruiser, an overland rig designed by another Australian, Lance Gillies. What inspired you to build such an impressive looking rig? Was it simply to save money or was it just the challenge? What are you calling it?

Orios Zavros: As you know, no set up is perfect, everything is a compromise and this is no exception. I decided to build my own for a few reasons, to save money is a big thing, however, simply finding a camper that ticks all the boxes for us (family of four with two children under two years old) off the shelf, so to speak, is near impossible. I also have always loved building things myself, you get a special satisfaction from seeing the final product. For now it has no name apart from my Father-in-law affectionately calling it “The Pod.”

TCA: Let’s start with the truck? What is the make and model and what are its specs?

Orios Zavros: The truck is a 2006 Mitsubishi Fuso Canter FG649 4×4. It runs a four-cylinder turbocharged and intercooled diesel 3.9L engine, five-speed manual gearbox and Hi/Lo transfer case. It has seating for seven people, weighs around 3,300 kilograms (7,200 pounds) without the camper on it, and can carry a further 2,700 kilograms (6,000 pounds) on the back.

TCA: Coincidentally, EarthCruiser is now offering a double-cab Fuso like yours. What upgrades, if any, were made to your Fuso’s suspension to carry your camper?

Orios Zavros: No modifications have been made to the suspension yet. However, it will be getting parabolic front springs, heavy duty rear springs and new shock absorbers all round soon.

TCA: What other upgrades were made to the truck?

Orios Zavros: I have fitted full-cab, door and roof insulation and sound deadening, this has made a massive difference to comfort and drivability, reducing the noise and heat from the engine as it is a cab over engine. I fitted a second diesel tank taking the standard 90L (24 gallon) capacity to 280L (74 gallons). This should give us a range of around 1,500 kilometers or 930 miles.

Instead of using a ball valve or transfer pump to link tanks or pump from one to another, I decided to use a solenoid that not only changes supply and return lines of the tank, but it also swaps the fuel tank sender feed to the gauge. This means I have two separate tanks with their own filtration system, and with a switch in the cab I can select between the two tanks and the fuel gauge changes accordingly. 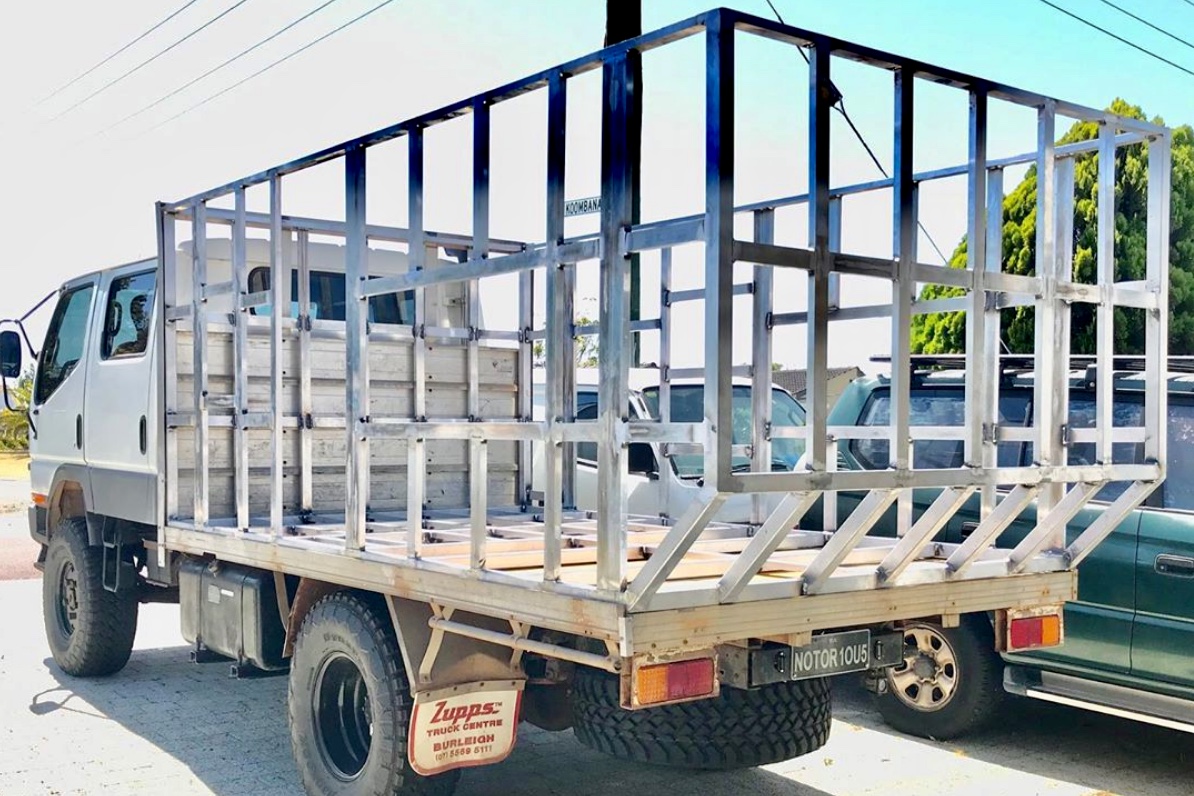 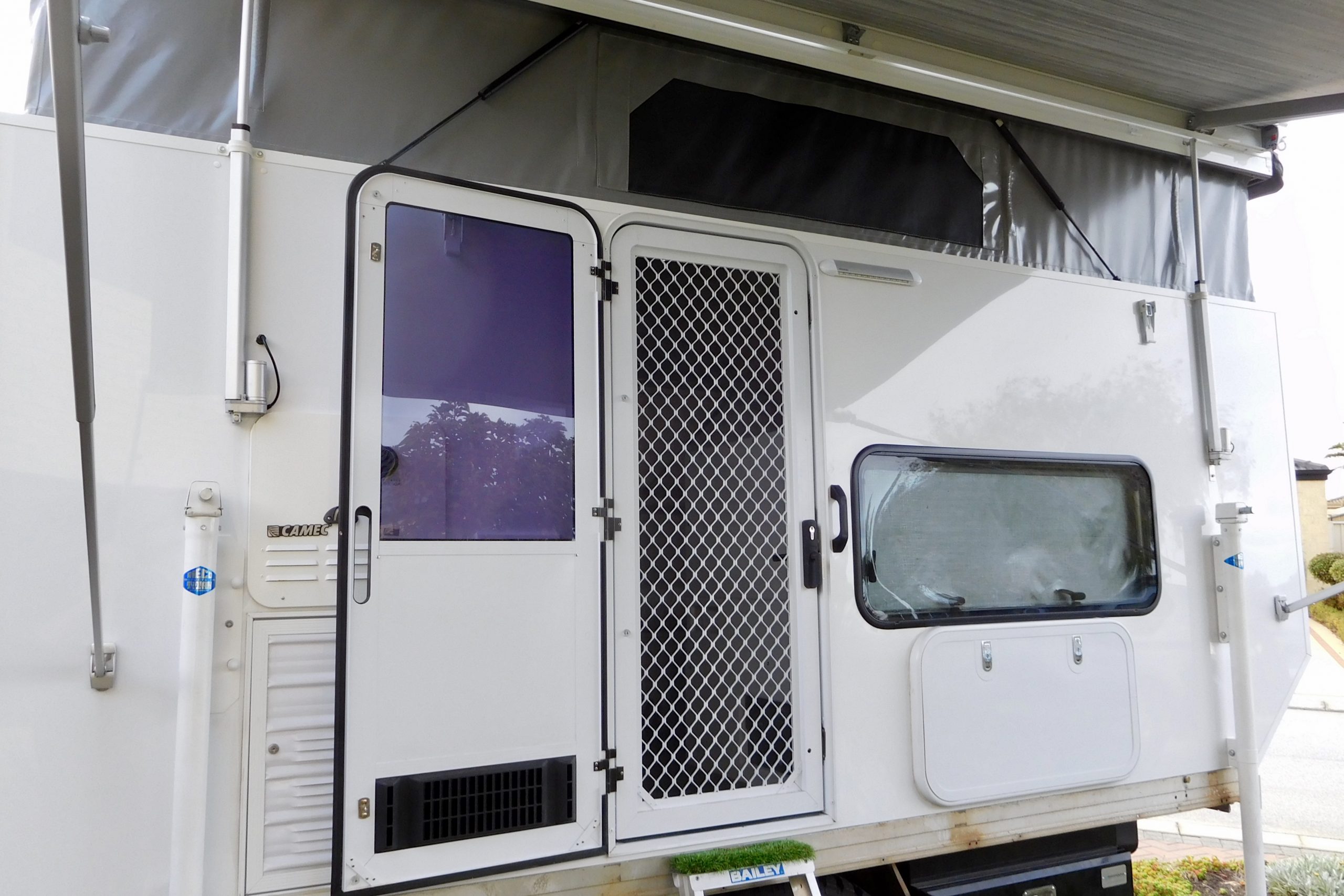 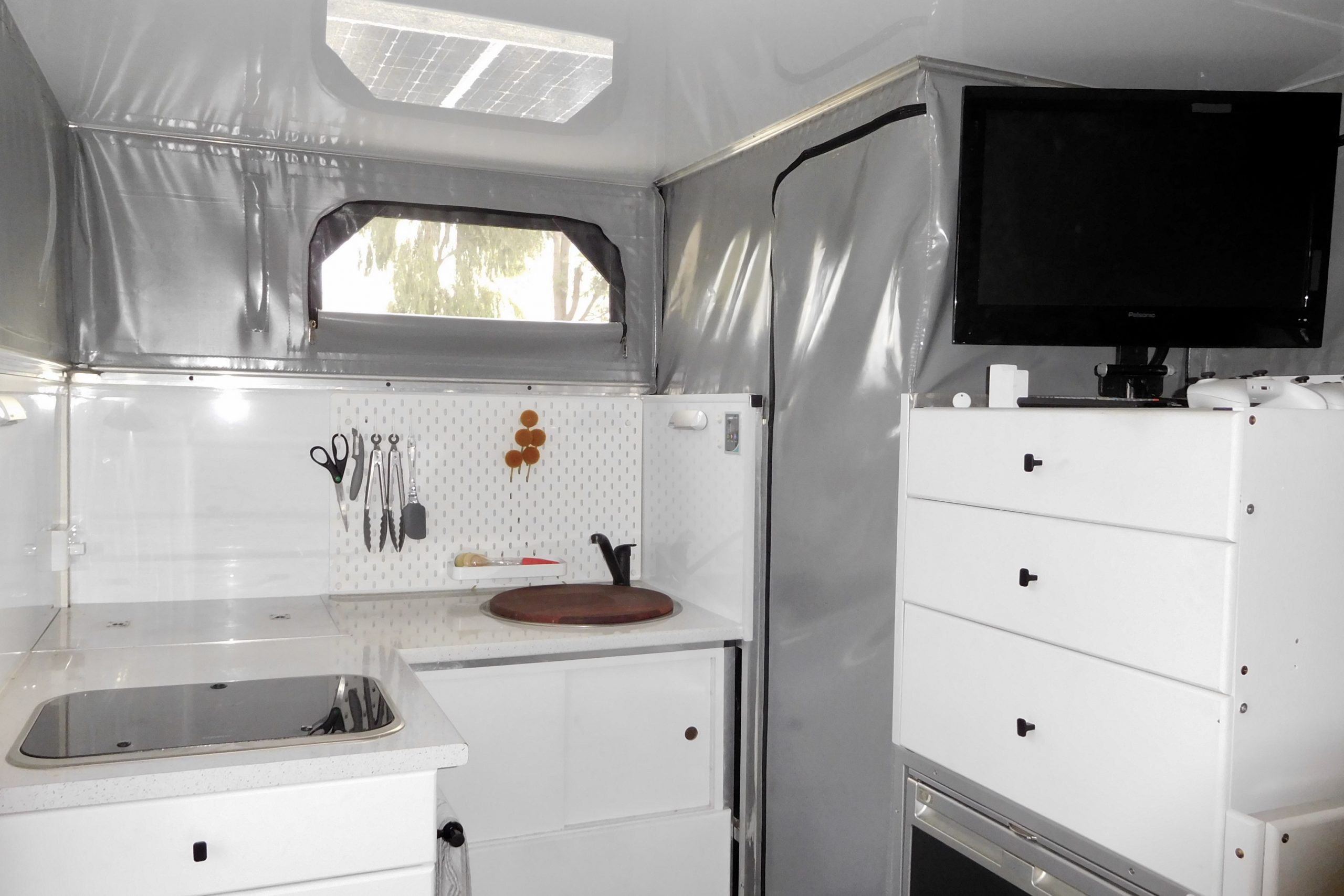 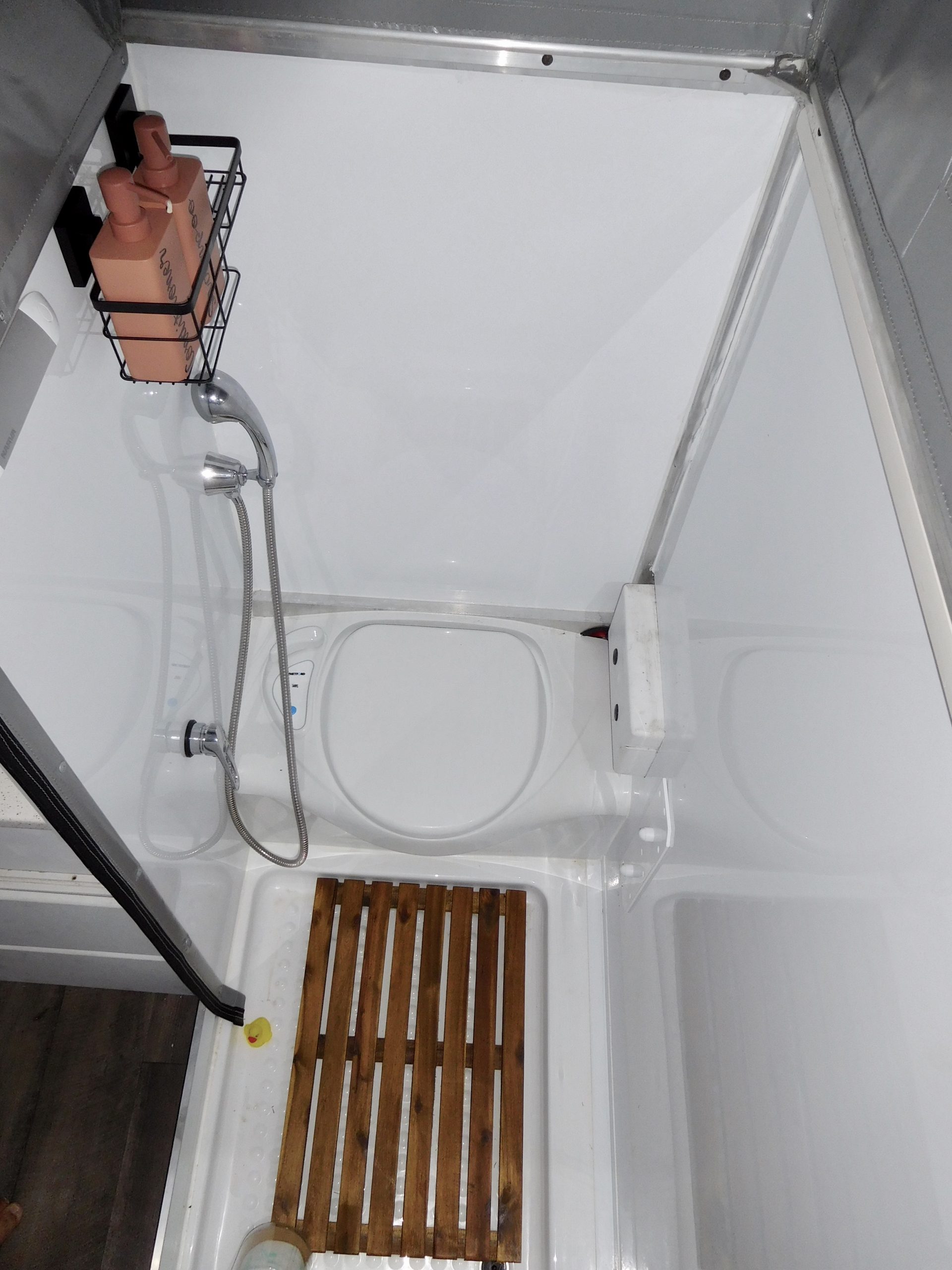 The dual battery system with 380 watts of solar on the roof run the Dometic fridge/freezer for on-the-road snacks and drinks, as well as powering the stereo system and lighting. The tray has been fitted with spring mounts to allow for chassis flex off-road without disturbing the structural integrity of the camper. A 55L freshwater tank is also fitted for back up.

TCA: Are the engine and transmission stock?

Orios Zavros: Yes, both are stock, but the engine has been completely rebuilt along with the injector pump, injectors and turbocharger.

TCA: Can you tell us more about the wheels and tires?

Orios Zavros: The wheels are a 17-inch Super singles, these replace the standard dually at the back and correct the track front to back as well as retaining the ability to use one spare that fits all four. The tires are a 37-inch Hankook Dynapro all-terrain tires.

TCA: Let’s now talk about your camper. How did you design it?

Orios Zavros: I designed it on a piece of paper with a pencil and just free hand drew what I wanted it to look like considering everything I wanted in it. No fancy computer aided designs here.

TCA: How is the camper constructed? How much does it weigh?

Orios Zavros: I used 3mm-thick aluminum box section and rectangle section to make the frame, the outside sheeting is an aluminum composite sign panel, a thermoplastic polyethylene sandwiched between two thin sheets of aluminum. The walls and roof are filled with fiberglass insulation. The floor is made of marine plywood and the internal walls are mainly construction plywood. The last trip we weighed in at 5,340 kilograms (11,770 pounds) and got 18.7L/100 kilometers (12.5 mpgs).

TCA: Is the roof constructed the same exact way?

Orios Zavros: Yes, the same way. I used two large sheets of the composite panels, one on the outside and one inside as to have no joins and give a nice gloss finish on the ceiling.

TCA: The camper’s floorplan looks very functional for such a “small” space? Can you tell us about some of its features?

Orios Zavros: Trying to fit everything in is always going to reduce living space, but I think I have balanced it as well as I could. The kids have their single bunks and own area under the master bed. When the master bed is lifted up it allows the whole family to sit and eat if needed, most of the time we do this outside, but I wanted the ability to sit inside if the weather isn’t great. One of my main goals was to be able to have a king-size master bed set up for north-south sleeping as well as being able to leave the bed made up even when its raised.

Some of the other features I have incorporated are an ensuite wet-bath with a cassette toilet, a hidden air conditioner unit, a 140L upright Dometic/Waeco fridge freezer, and a washing machine, which is hidden in the kitchen.

TCA: What are the specs of the camper?

Orios Zavros: The camper holds 180L (50 gallons) of fresh water, 9 kilograms LPG or propane and 20L (5 gallons) of grey water. I have also fitted a main hook up for water and shore power when at a caravan or RV park. The electrical system is all Enerdrive, 200 amp hour lithium battery, 2,000 watt pure sine inverter, 40 amp DC-DC charger, 20 amp AC-DC charger, and a 760 watt of solar power system to keep everything charged up when off grid camping. When the camper is on the truck, the extra 380 watts of solar on the truck is also fed into the camper to give a total of 1,140 watts!

The inverter in the camper has a built-in 240 volt AC transfer switch so all the appliances will run off the inverter (including the air conditioning). As soon as the camper is plugged into shore power the inverter automatically switches all outlets to run off shore power. This also triggers the AC-DC battery charger to start topping-off the battery, not that it’s really needed with so much solar power. 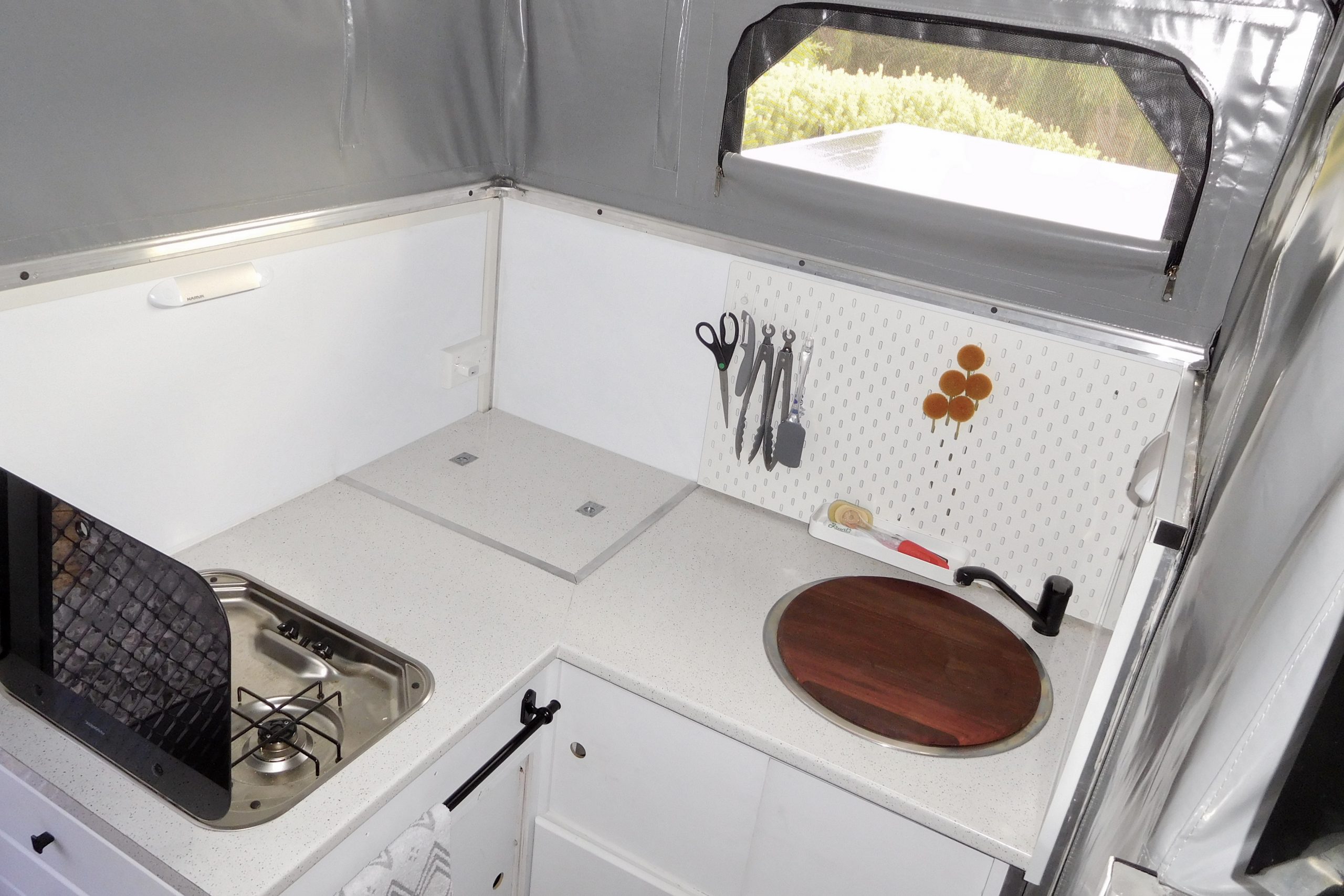 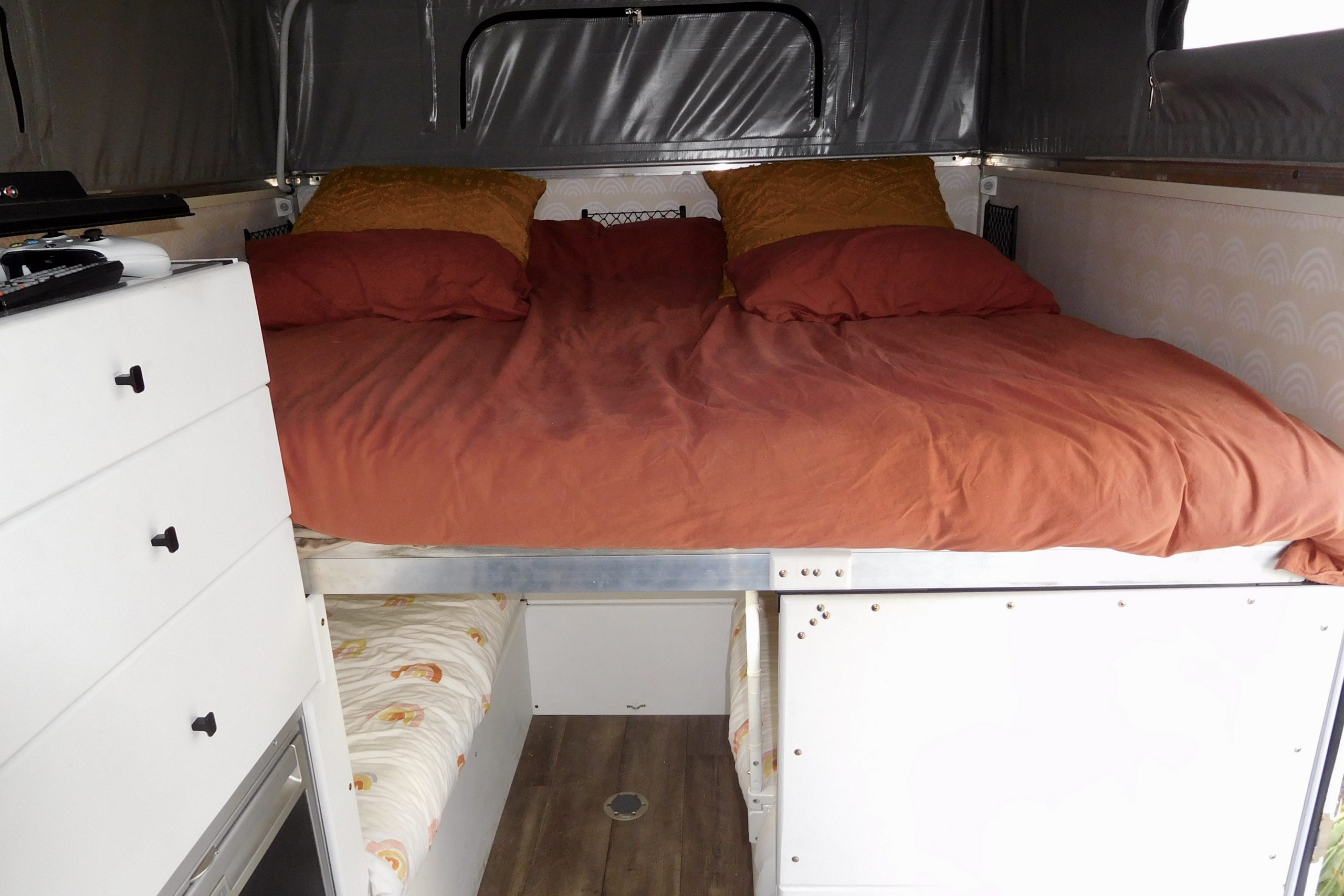 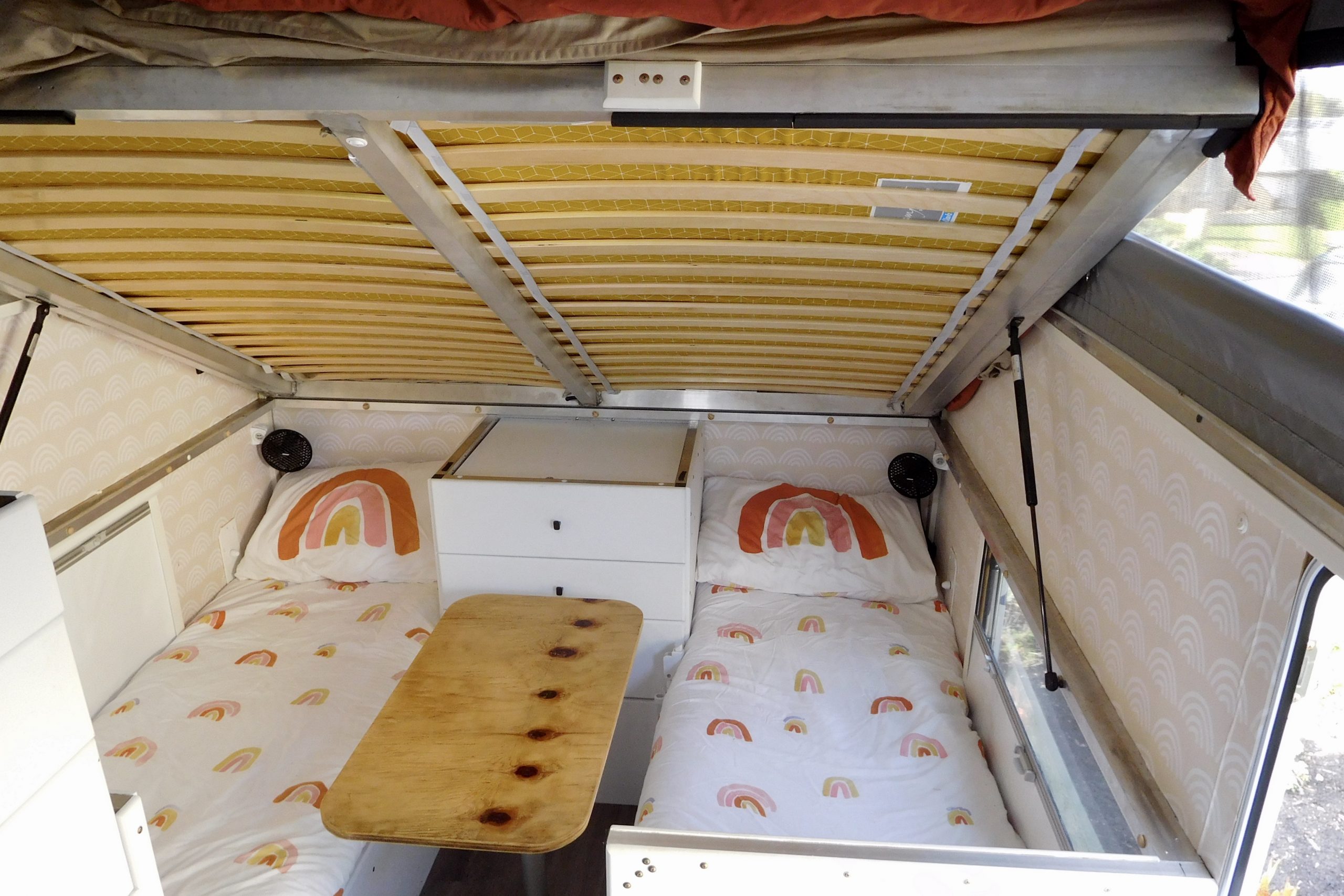 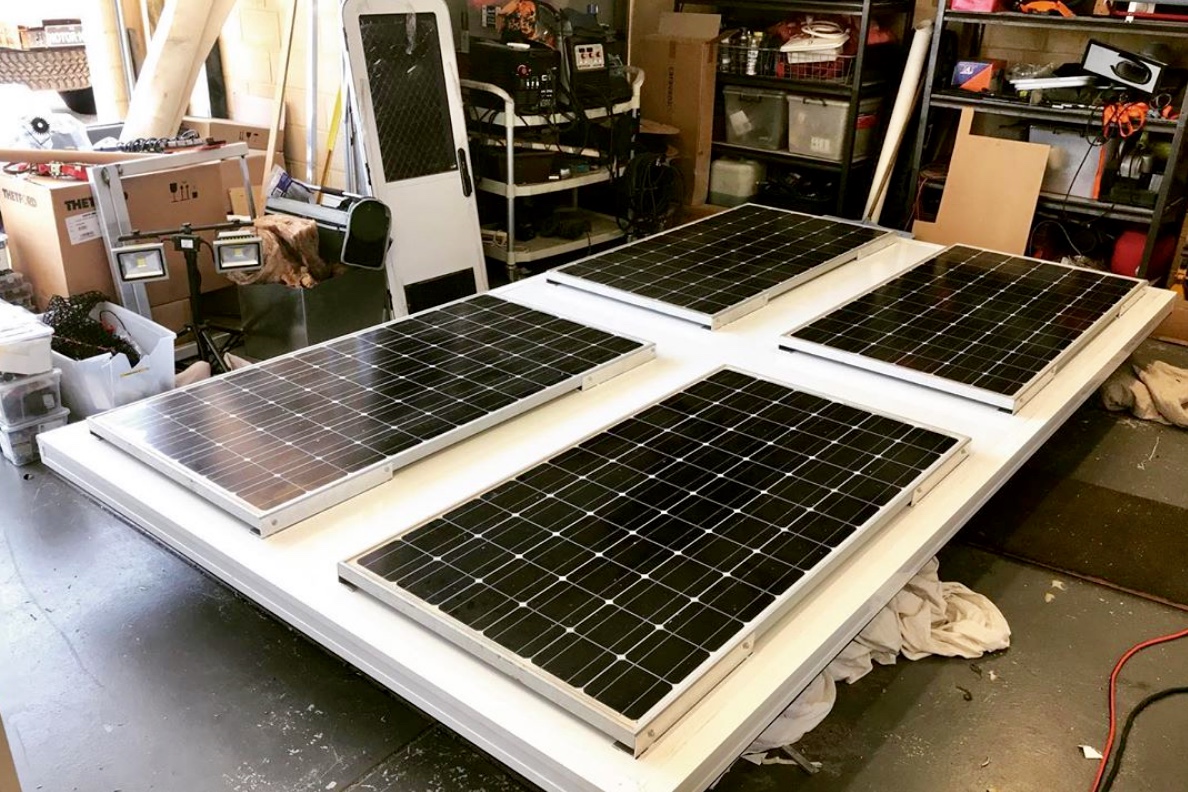 TCA: Can you tell us about the camper’s heating and cooking systems? Will everything run on diesel?

Orios Zavros: The only heating we have is for the hot water. It’s a Camec instant hot water system powered by LPG/Propane. Where we live and travel, we don’t really need cabin heating; however, I have left provision for a diesel heater if we decide in the future we need it. Cooking can be done on a portable induction cooktop that we use mainly outside or the Dometic two-burner gas cooktop in the kitchen.

TCA: How durable is the pop-top roof? How much weight can it support?

Orios Zavros: Enough for me to be able to stand up there even with the roof up; even with four solar panels and two awnings attached to it.

TCA: Can you tell us about the roof lift actuator system?

Orios Zavros: This was probably the hardest part of the build for me. It took a fair bit of trial and error to get it the way I wanted. I ended up using four electric linear actuators and eight gas struts to make the roof completely automatic. The eight gas struts offer an amazing amount of stability when the roof is up. Doing this was very important for high-wind situations and because the main awning is able to run without legs on the ground, this would have put too much horizontal strain on the actuators. The actuators are wired to an up/down switch in the control panel, so all I have to do is press a button and walk away to raise or lower the roof.

TCA: Is there anything else you’d like to tell us about the truck and camper?

Orios Zavros: I think we have covered everything really. It has been a bit crazy building them both myself in such a short time frame, I have learnt a lot from it and would do a few things different next time. However, I’m really happy with how it has turned out and can’t wait to get out and start using it. 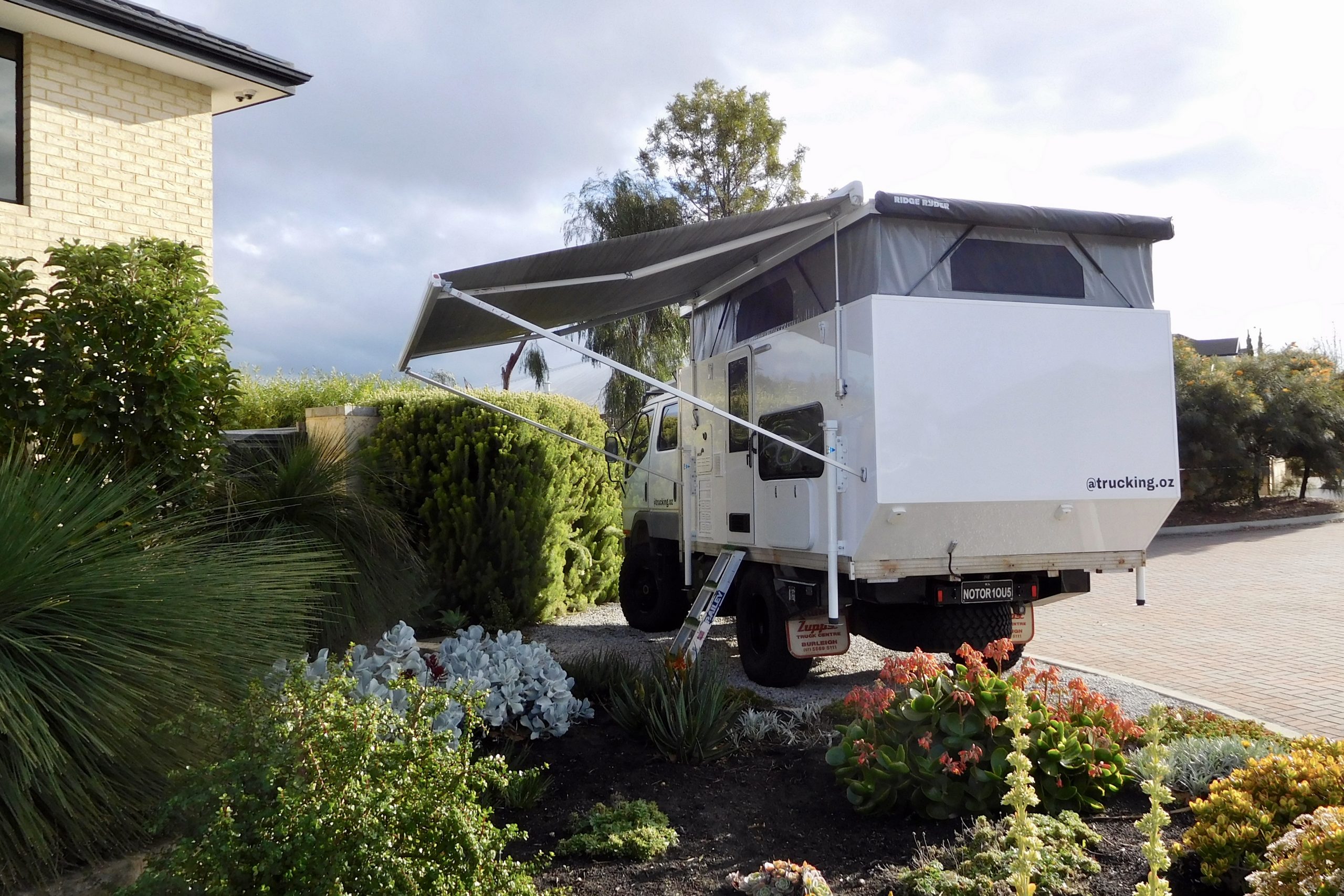 After a 16-month hiatus due to the COVID-19 pandemic, Truck Camper Adventure is happy to report that the 2021 Overland Expo West in Flagstaff, Arizona, went off without a hitch with over 30,000 people attending. [read more]