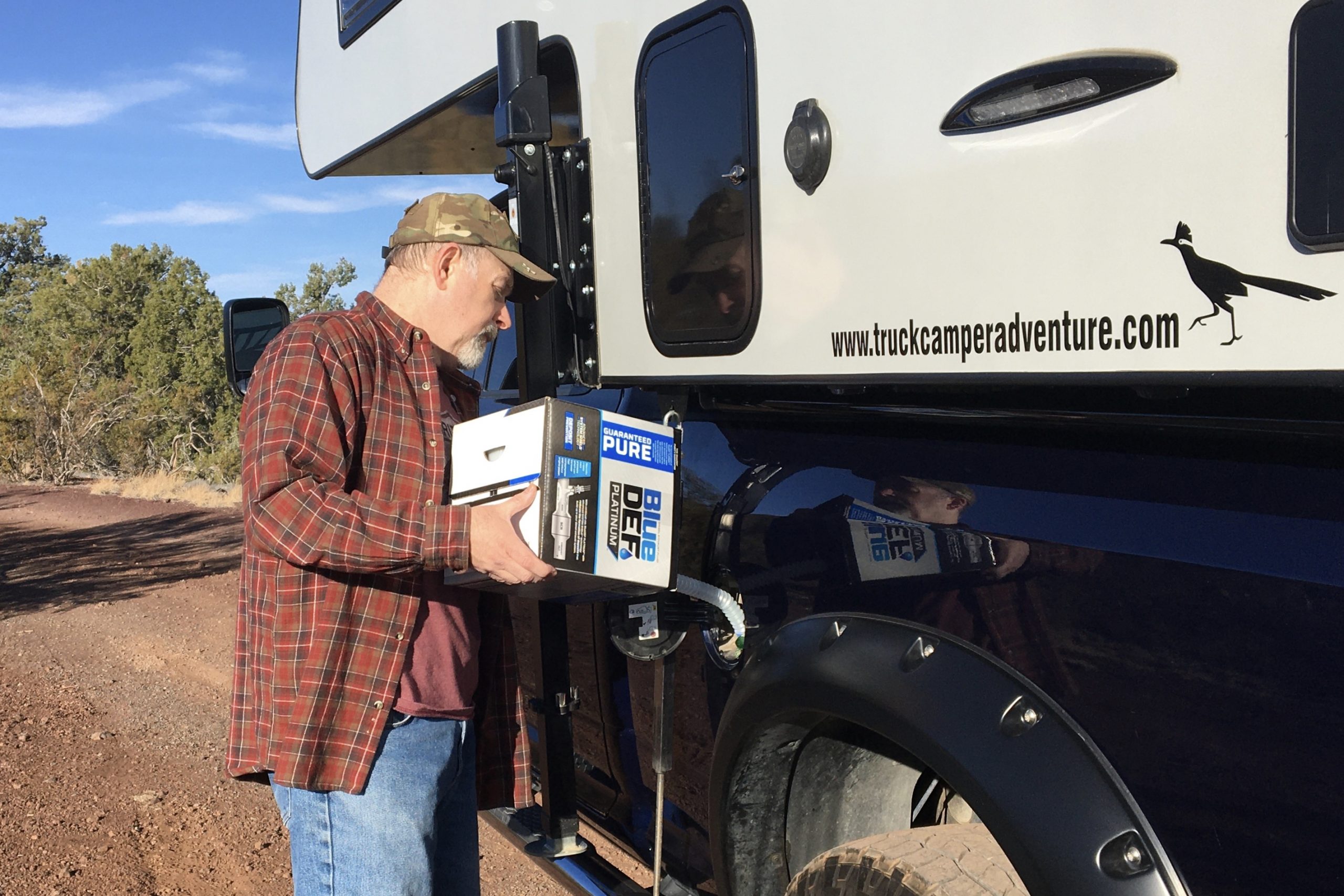 Unfortunately, it happened. Our Ram 3500 Cummins 6.7L truck went into the dreaded “limp mode” on a recent trip here in Arizona. The alarm on the dashboard read, “5 mph Max Speed in 100 mi, Service DEF System, See Dealer.” If this has never happened to you, it sucks. Engineered to prevent further damage to your vehicle, the limp mode forces you to see a dealership because 5 mph isn’t a safe speed to drive anywhere, city or highway. It also forces you to sometimes call a tow truck. Fortunately, we were within 100 miles from our destination when we got the warning, so we were able to get it to a service center before it went into this so-called “protective” mode.

The news from the service center wasn’t good. The tech told us that our truck needed a new Diesel Exhaust Fluid (DEF) pump, a repair that would cost $1,797 ($480 in parts; $1,317 in labor). The code reader showed an error code of P208A, Redundant DEF Pump “A” Control Circuit Open. We also had a bad Bank 1 NOx sensor, which triggered another error code of P1C55, which we had already known about, but didn’t trigger the limp mode. This required a replacement as well costing another $1,650 ($1,410 parts; $240 labor). Ouch!

Apparently, these are common repairs for diesels with Selective Catalytic Reduction Systems (SCR’s) running DEF (basically all diesels built after 2010). This is because most DEF formulas leave harmful deposits that will eventually cause failures like ours (a bad—read old—batch of DEF can trigger a DEF limp mode as well). We were fortunate that our system lasted seven years before it had a major failure, but other diesel owners haven’t been so fortunate. Some have had to make similar repairs soon after their warranties expired.

Coincidentally, two weeks later the good folks at Old World Industries, the manufacturer of Peak Coolant and BlueDEF, contacted us about their new BlueDEF Platinum, a new formula that they claim significantly reduces harmful DEF deposits. If you have a diesel engine with a SCR system, you’re probably familiar with the filmy, white deposits left by DEF fluid if you’ve ever spilled it on your truck or on the ground. Imagine these white deposits in your DEF system building up over time, creating all sorts of problems. Having just forked out over $3,500 in expensive repairs, you’ll under understand why we were intrigued when we learned about this new product. 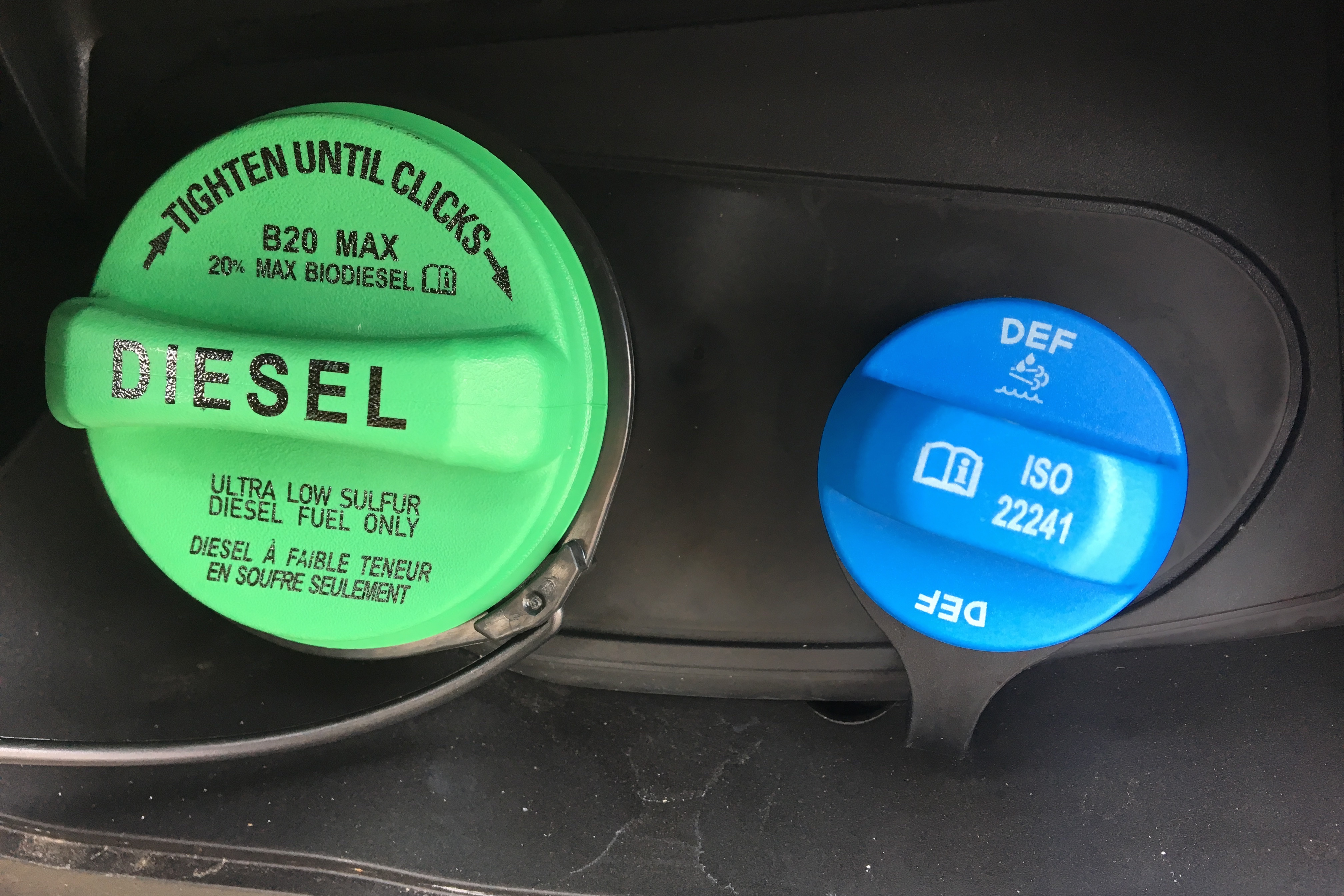 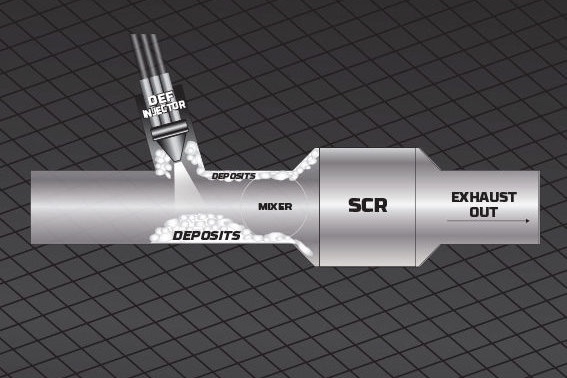 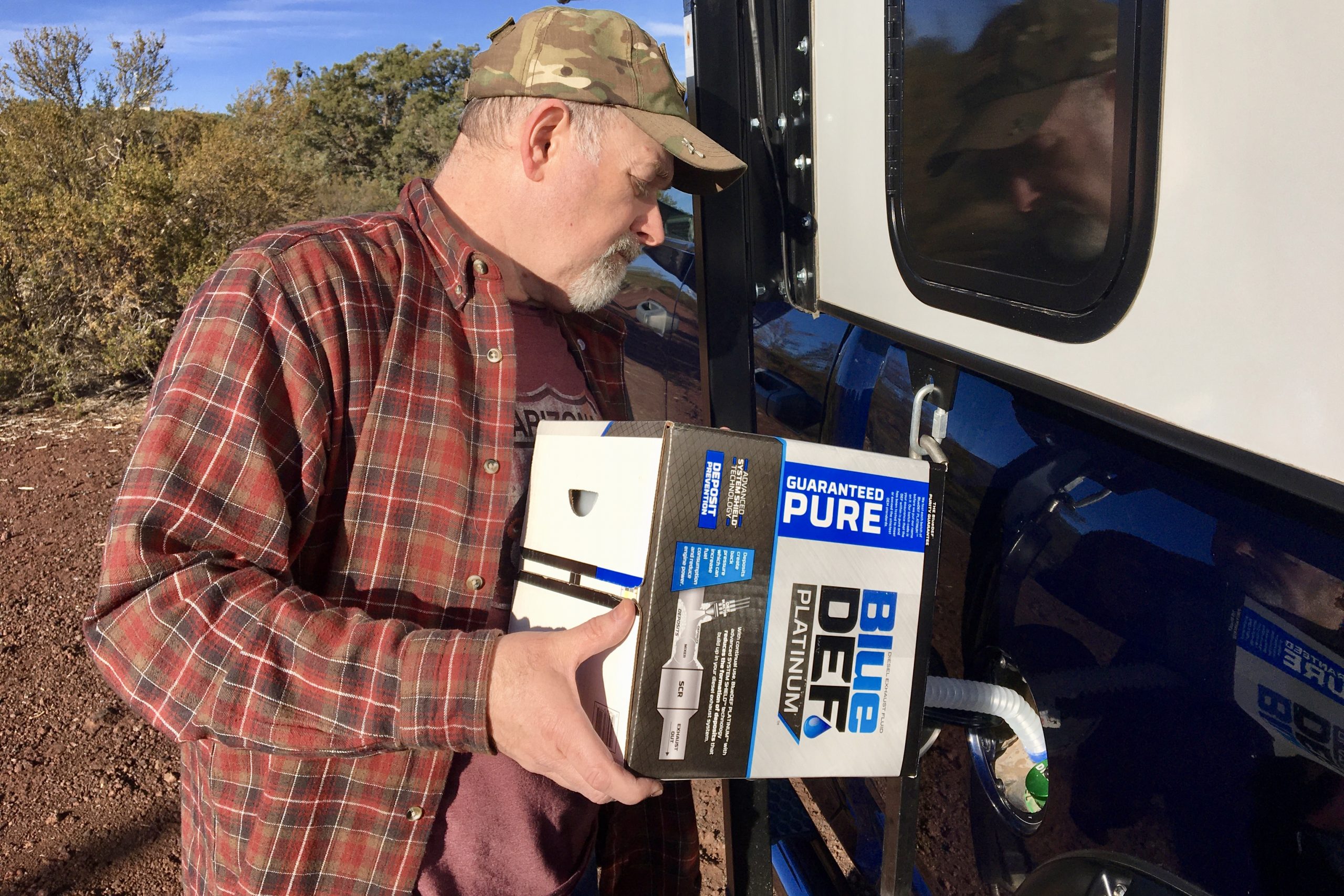 According to Old World Industries, BlueDEF Platinum is a mixture of high purity synthetic urea, deionized water, and a proprietary formulation featuring what the company calls its “Advanced System Shield Technology.” This refined formula, they say, significantly reduces harmful deposits that commonly build-up in modern diesel exhaust systems with SCR systems. These build ups, which are difficult to remove, can lead to back pressure, resulting in increased fuel consumption, as well as reduced engine power. Basically, these deposits are a result of the urea not burning-off completely. BlueDEF’s Platinum burns cleaner and reacts more completely in the exhaust system, which is how the deposits are reduced. It does so in the DEF injector itself, post DEF injector, and on the front of the SCR system.

BlueDEF Platinum, the company claims, is the purest DEF formula in the market. It is manufactured under ISO 22241 guidelines to ensure the highest product quality and is API registered, meeting or exceeding OEM specifications for diesel exhaust fluid. The MSRP for the new Platinum formula is $22.95, about $6 to $9 more than typical brands including regular BlueDEF.

Is using BlueDEF Platinum worth the extra cost? If it really works, we think so. Yes, we know what you’re thinking, “just delete all the emissions stuff and be done with it!” Well, with 74,000 miles now on our truck and our existing warranty, that isn’t an option. The warranty will be null and void if anything were to happen to the covered parts in a deleted engine. Unfortunately, our truck’s “warranty forever” warranty doesn’t cover emission DEF, SCR, and EGR related issues.

What brands DEF did we use before that created these costly deposits in our SCR system? Basically, whatever was available on our trips. We preferred using the regular BlueDEF formula, but that wasn’t always possible. When you’re on the road you don’t always have a choice when it comes to DEF. Some brands we used east of the Rockies we had never even heard of. All were supposedly ISO22241 compliant, but you have to wonder if some of these brands caused these costly deposits. And if all of these brands were compliant does the ISO standard need to be raised? Possibly. In the meantime, we will continue to use the BlueDEF’s Platinum grade in the hope it keeps our SCR system running cleaner and smoother.

To learn more about this intriguing new product, go to www.BlueDEFPlatinum.com. 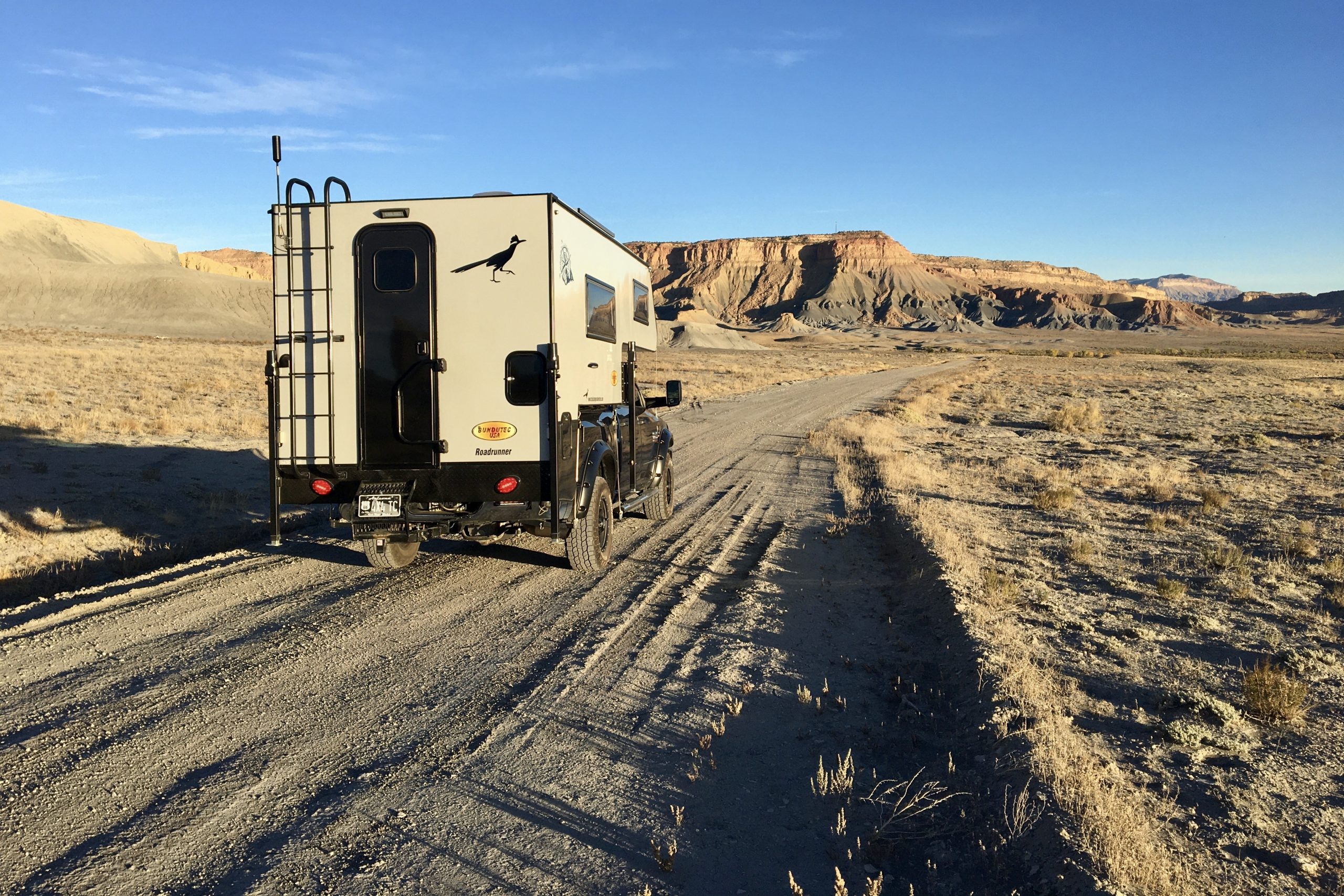 In 2017, we published our first article on this contentious topic called, “Gas vs Diesel for Truck Camper Rigs: Which is Better.” In that article we presented nine things to consider before buying a new [read more]

Exploring Utah and Living the Dream Via Truck Camper

Truck Camper Adventure is proud to present this interview with Matt Kasner. Matt grew up in the Midwest and is an avid outdoorsman who enjoys rock climbing, mountain biking, skiing, and, of course, truck camping. [read more]

Diesel vs Gas: The Pros and Cons for Truck Camper Rigs