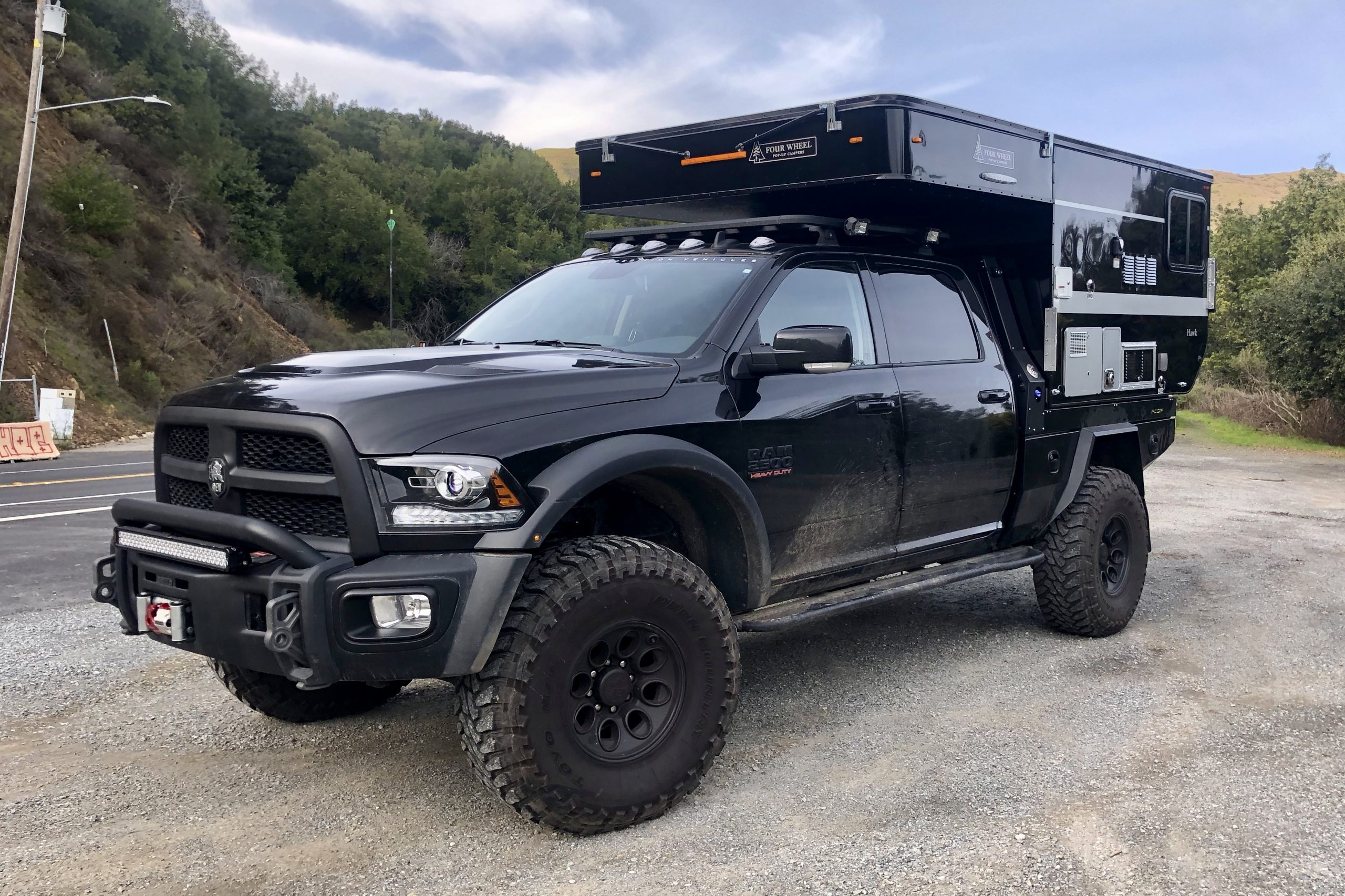 Fifty-two-year-old Marine veteran Sean Silvera was stoked when he completed work on his truck camper build in January. He purchased the best suspension upgrades for his Ram 2500 that money could buy, installed an imported aluminum tray outfitted with all the bells and whistles, and topped it all off with a brand-new Four Wheel Camper (FWC) Flatbed Hawk. In all, Sean spent $175,000 on the rig, but the results were worth it.

“It was a one-of-a-kind truck,” Sean said. “It was a Ram AEV Prospector XL, so it was on 40’s. It was their full build. I put one of the first PCOR4x4 off-road trays on it from Australia. I put a Hawk Ute flatbed camper on it and really built that out for off-grid travel. They put one of the very first Redarc systems in from the factory, put Battle Born lithium batteries in, and put two solar panels on top. In the tray itself, I had another 30 gallon water tank put in with a pump. I mounted a big 16.5ti Warn winch on the front of the truck and another 12.5 Warn winch on the rear, so I figured I could get out of anything I ever got myself into.”

The contractor and married father of one was ready to travel and see the world in his new Four Wheel Camper. Then the pandemic hit. After weeks of seclusion in the city, and suffering from a severe case of cabin fever, Sean decided to spend a weekend at his rural, mountain property near Laytonville, California. By the time he got there, it was raining heavily.

Sean needed Internet access to send some important documents for work and his cabin didn’t have it. Remembering that a nearby mountain had decent cell reception, he decided to take his camper, newly outfitted with a Weboost Drive X Cell Booster, to the top where he could send the documents. His massive tires slipped in the mud as he climbed the narrow forest road, but he wasn’t too worried because his truck was equipped with 4WD and lockers. Tree branches were his biggest concern.

“Being a flatbed camper on a lifted truck with 40-inch tires, the camper was taller than most,” Sean recounted. “I always swerved to get away from branches on the right side to avoid scratching it. There was a part of the road that was narrower than most and I remember turning away to avoiding hitting the top of the camper and the left side got really close to the edge of the road, then the road just collapsed. The back of the truck went down first. The first rollover was end-over-end, so I went back bumper to front bumper and hit a pretty big oak tree that broke. Oak trees don’t break that easy, but collectively the truck and camper weigh about 10,000 pounds. I don’t know how many times I rolled—I’m guessing five to seven times—and landed at the bottom of the ravine totally upside down.”

Miraculously, Sean wasn’t hurt during the 300-foot rollover and fall. In fact, he walked away without receiving so much as a scratch. The four air bags deployed almost immediately protecting him from the violent, rolling impacts. Sean also believes the 1,400-pound camper protected the cab from crushing in on him. No doubt, the Four Wheel Camper’s size and rugged aluminum frame provided just enough protection for Sean to walk away from the horrific accident. 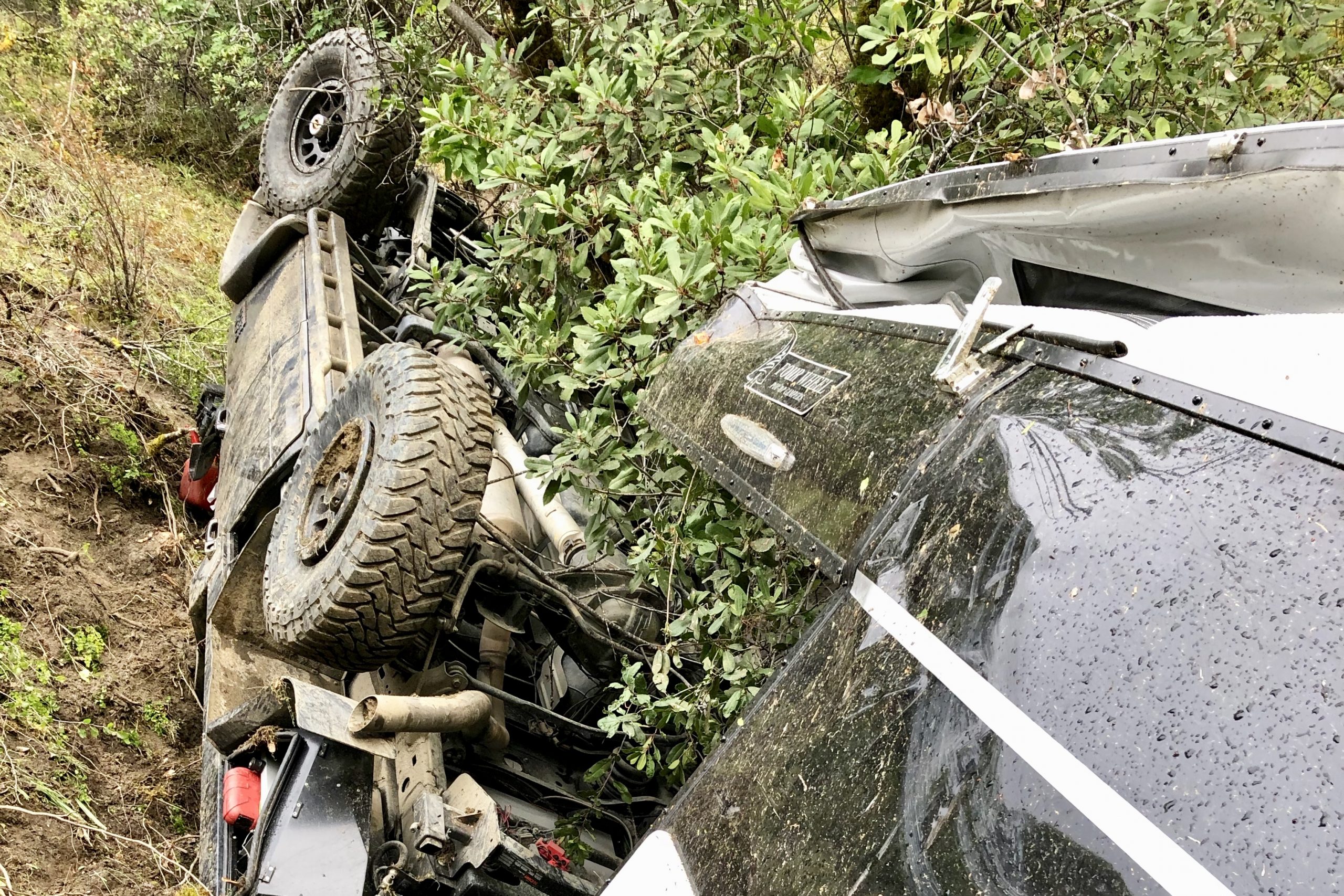 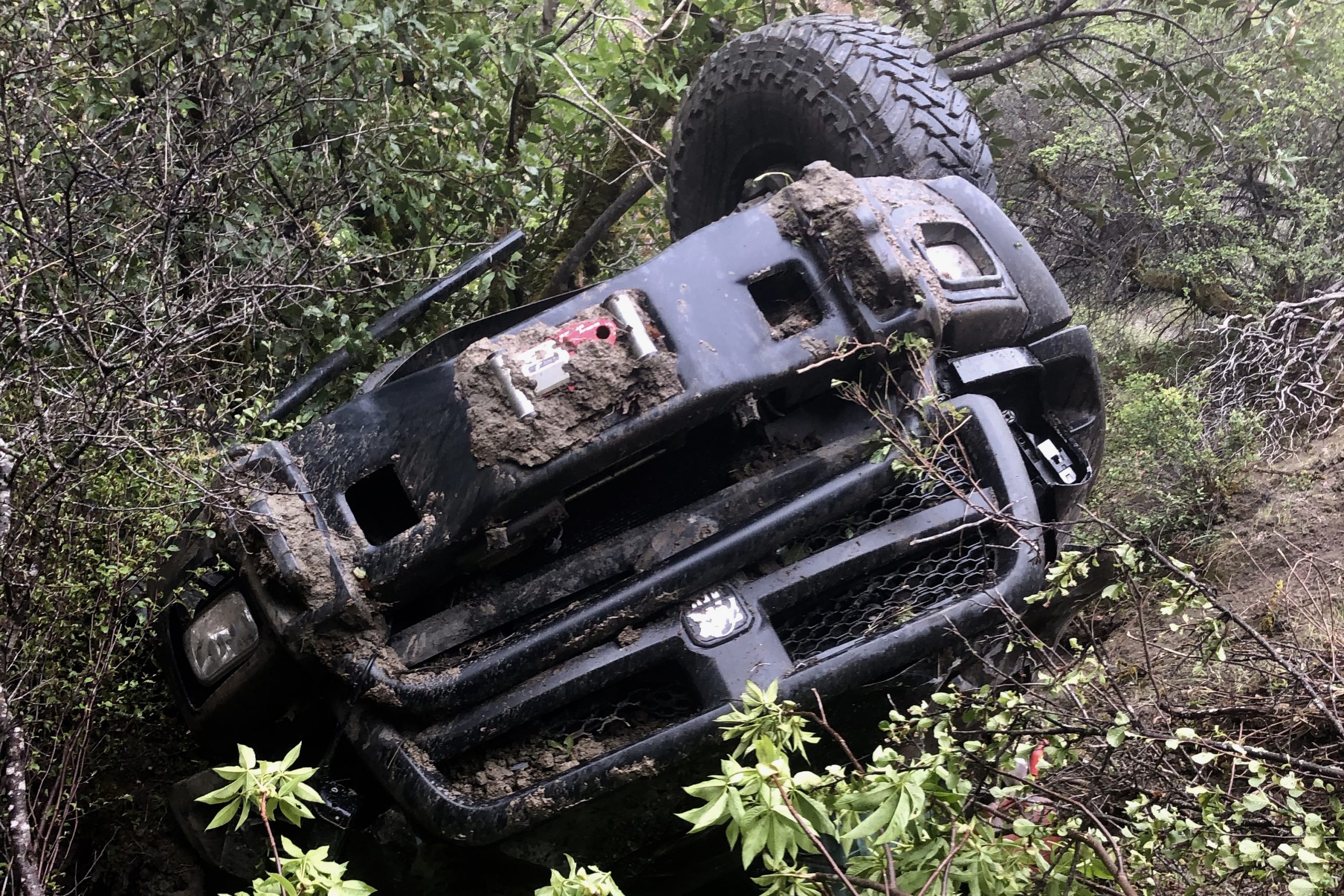 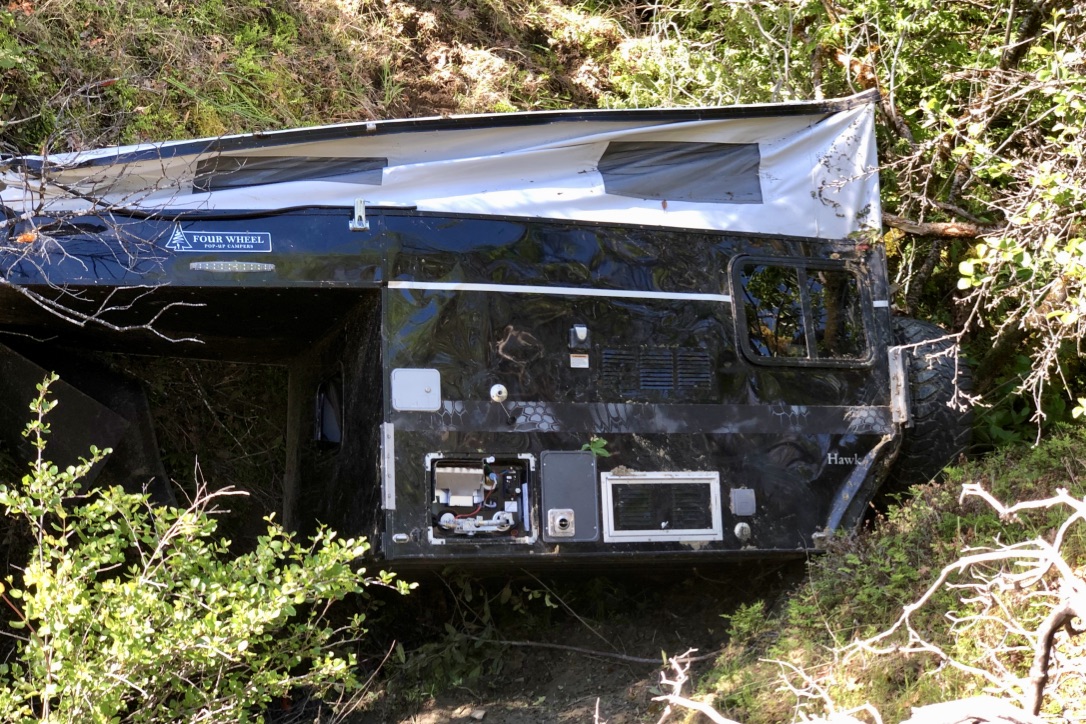 “The air bags came out and I was upside down in the bottom of a ravine,” he said. “I didn’t know what actually happened at first. I didn’t black out, everything happened so quick within the first roll everything turned white because all of the air bags deployed. I was upside down at the bottom of the ravine saying to myself, “what’s going on?” I had one of those belt cutter-window breaker tools and, of course, I didn’t have it mounted. It was stuffed in my driver side door pocket and it flew out somewhere. Thank, God, it didn’t hit my head. I was able to unstrap myself, but I couldn’t get out because I was wedged in between a ravine and I couldn’t really see outside the front because of the air bags. I could see light though the passenger side air bag, but you can’t kick air bags, so I couldn’t kick the window to get out.”

Getting safely out of a vehicle quickly after a major accident is a must. Fire is the biggest danger anytime gasoline or propane is involved in an accident. As Sean began looking for a way to get out of the mangled, upside down truck, he noticed two things—smoke and the smell of gasoline.

“The thing that bothered me was that there was smoke in the air, but it was actually powder from the air bags, and I could smell gasoline from a leaking, small can of gas. It was a diesel truck, so I wasn’t worried about the truck catching fire, but I was worried about the gas, so it freaked me out a little bit, but it was just the idea that I couldn’t get out. I was out in the middle of nowhere and I had my .45-caliber pistol handy, so I shot the passenger side window out, through the air bag.”

Injuries caused by deploying air bags are pretty common in automobile accidents. These include fractures to the face, ribs, and skull, concussions, as well as serious injuries to eyes and ears, but there’s no doubt that the four air bags helped save Sean’s life. In his case, the worst part of the air bag deployment was the extraction. Getting out of the truck was easier said than done.

What Sean saw after safely extracting himself from his truck was shocking. The truck and camper were completely separated, trees were toppled, and debris was lying everywhere. Sean needed help, but there was no cell service at the scene of the accident. Fortunately, Sean had a Garmin InReach satellite communicator with him that he used to text a friend for help. Within 20 minutes, help was on the way.

“I wasn’t injured in any way. I wasn’t even sore the next day,” Sean recalled. “I never felt an impact. But I could see where the truck impacted the side of the hill. The rig took out a yard of soil. The ground was soft from the rain. The axles were broke and the rear springs had flown out. The welds were ripped apart on the truck. I never felt a thing. I think the camper really cushioned a lot of the impact and then, of course, the suspension and tires helped a lot. I was really lucky. I need to find religion. It still freaks me out a little bit. There’s no good reason for walking out of that canyon. There’s no good reason. Where the truck stopped and where I went over the hill was almost a perfect situation. I little bit further up the road and I would’ve went over a cliff.” 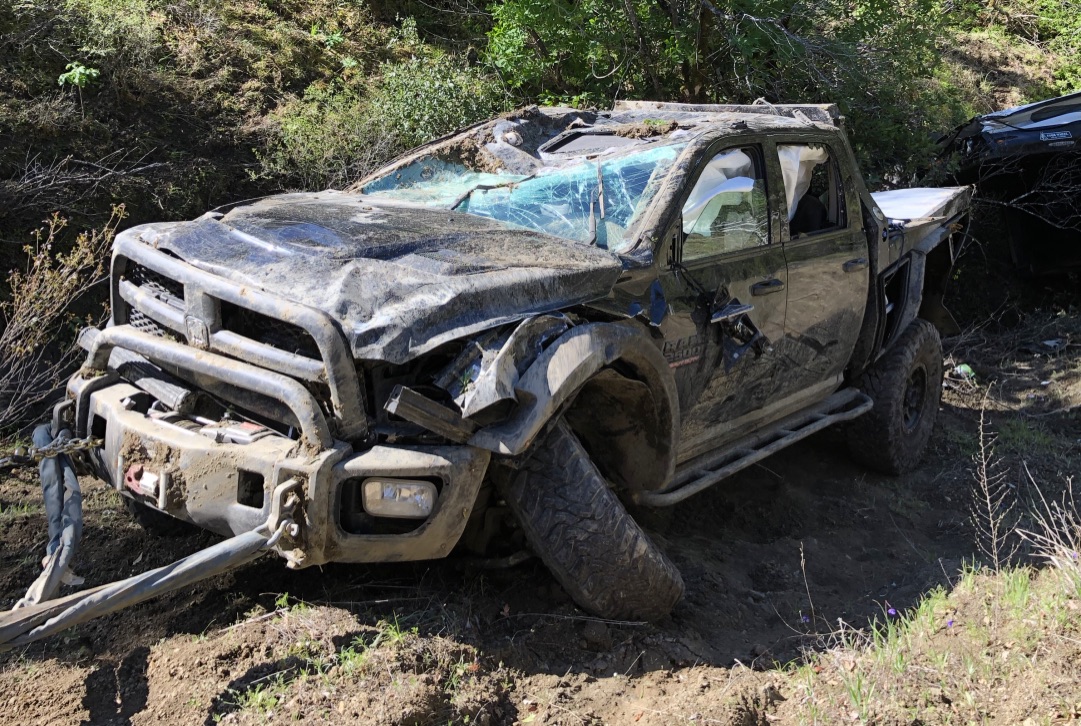 So did Sean have any trouble with his insurance company after this horrific accident? Fortunately, no. State Farm insurance covered all damages to both the truck and camper. His agent got photos and a complete description of the rig beforehand and covered everything. The only problem Sean had with the claim was extracting the wreckage. This had to be done before Sean could file the claim. Unfortunately, he had to pay for this service and locate a company capable of performing such work by himself. With a 300-foot drop in a very remote location, it was difficult finding a towing service that could do it. Sean eventually found one, but it was very expensive. The total cost for the entire extraction effort was an eye-popping $11,800.

So what are Sean’s thoughts now that the dust has settled and he has had a few months to reflect on everything? “Something that is very clear to me is that I should not have walked away from the accident without a scratch. I’m very grateful for the quality and durability of the products and manufacturers that I used on the build. Ram, PCOR4x4, AEV, Four Wheel Campers, Rhino and others all took the hit for me. I don’t mean for that to sound like an advertisement, but I’m really grateful for the fact that the camper prevented the cab from crushing in on me and that the tray held the truck and camper together long enough to protect me,” he said. 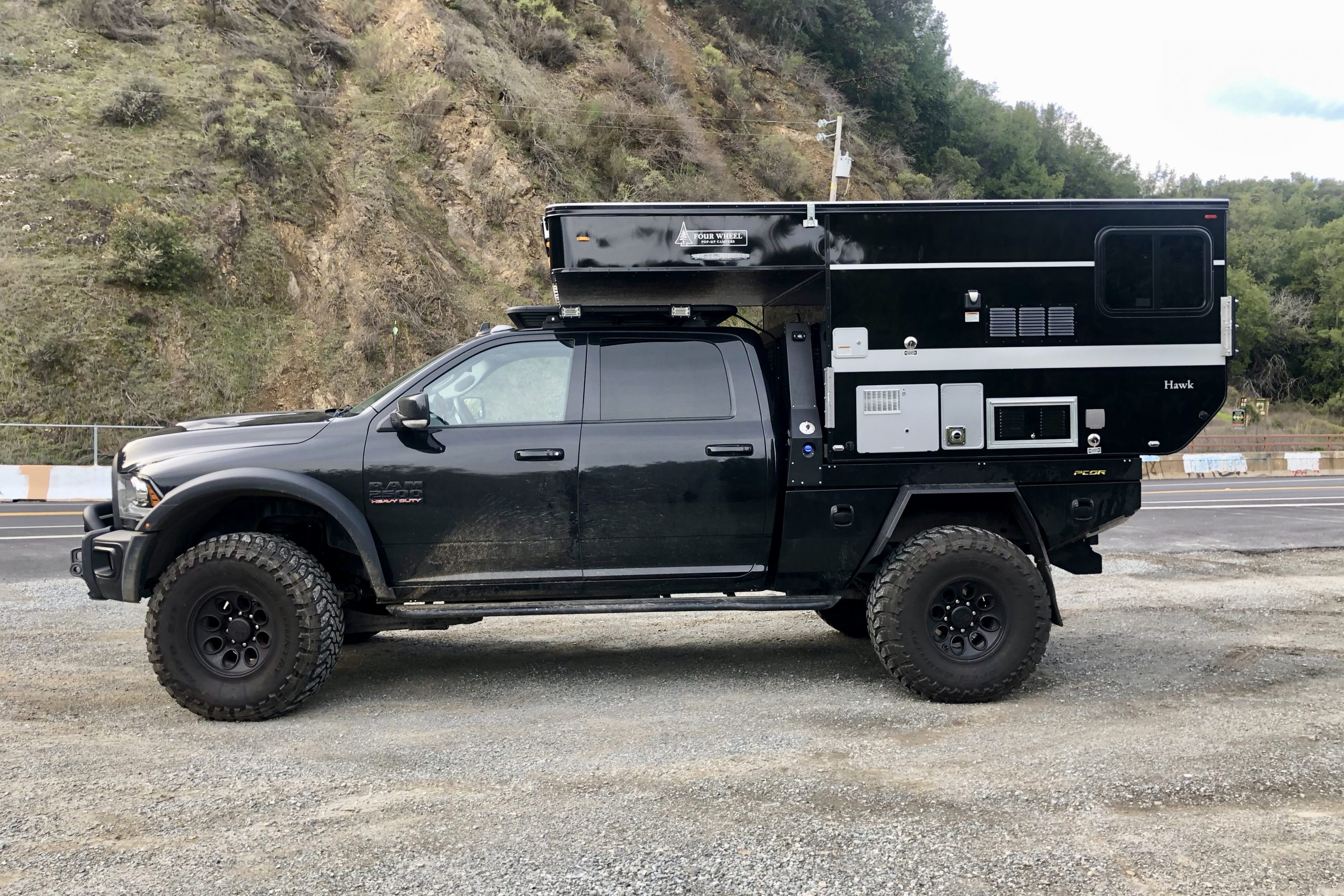 Each May thousands of overland enthusiasts gather in Flagstaff, Arizona for the Overland Expo West. The annual event, which showcases hundreds of overland vehicles and products as well as an impressive schedule of workshops and [read more]