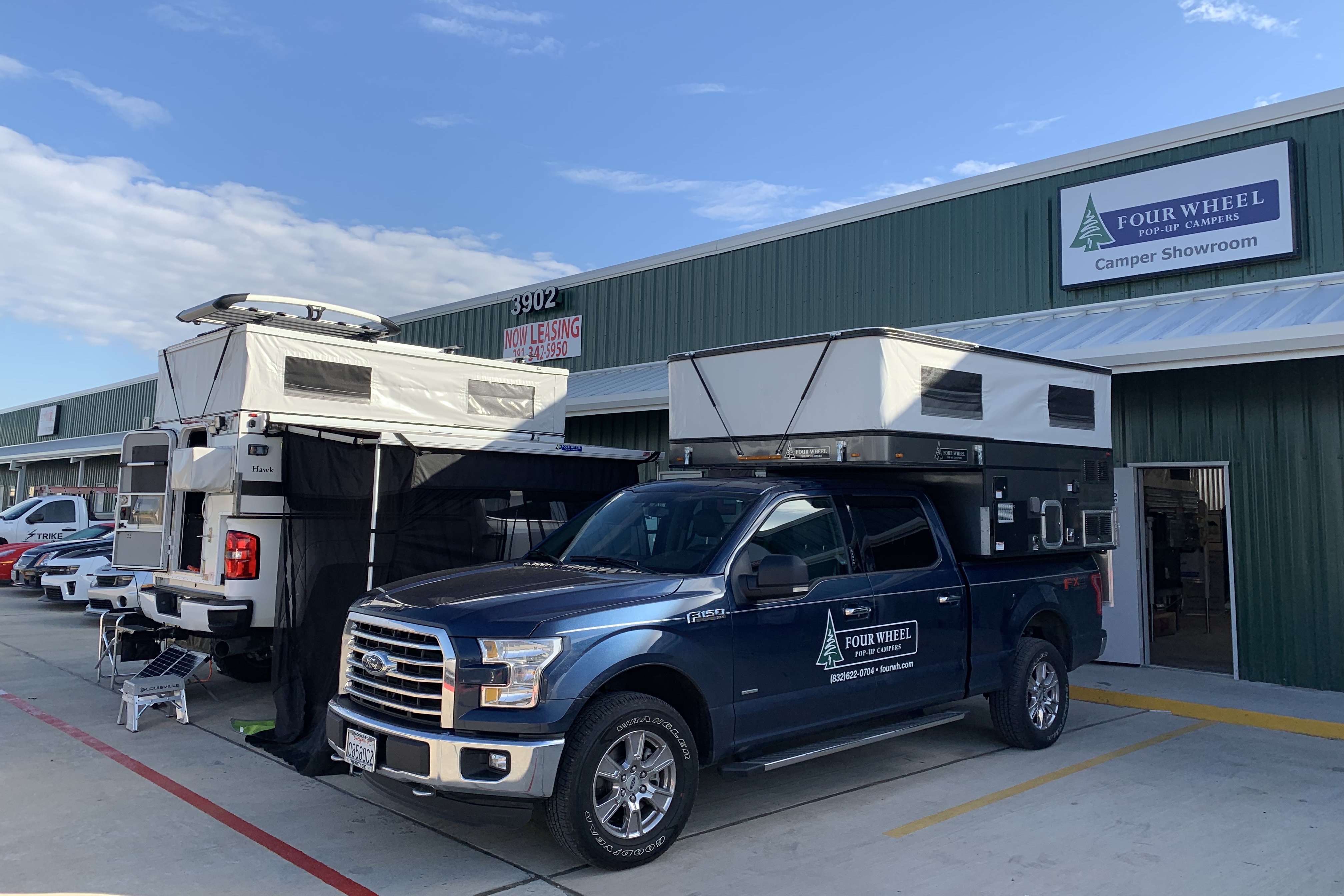 Four Wheel Campers (FWC) just opened its first company-owned dealership in Rosenberg, Texas, a suburb of Houston, and celebrated the grand opening with an open house last weekend. Four Wheel Campers supported the open house with food and drinks, and gave away T-shirts and caps.

“The open house went really well,” noted Dave Jansen, manager of the new Rosenberg Four Wheel Camper dealership. “We had seven FWC owners come in with their truck campers and had another 30 people wander-in throughout the day to check out what we have. We had food and drinks, gave away T-shirts and hats, and my wife brought a little bounce-house for the kids. We had 10 different Four Wheel Camper models on display—including several Hawks, a Fleet, and a Grandby—and were supported by several owners who showed up with their campers. We had one customer who was interested in a Raven Shell model, and literally as we were talking about it, an owner pulled in with one. We were able to show that potential customer the exact model that we were just talking about, so it worked out real well.”

With 15 dealerships nationwide, some may wonder why Texas was chosen for this new dealership. Part of the decision was based upon demand, part upon location. Texas has always been a hotbed for recreational vehicle sales, and with one out of five trucks in the United States being sold in Texas, opening a truck camper dealership in Texas made a lot of sense. “Part of it was what was available to rent, but mostly because Houston is an area with a large population,” Dave said, “and being on the eastern side of the state gave us access to Austin, Dallas, San Antonio as well as Louisiana and Arkansas. It’s a great location.” 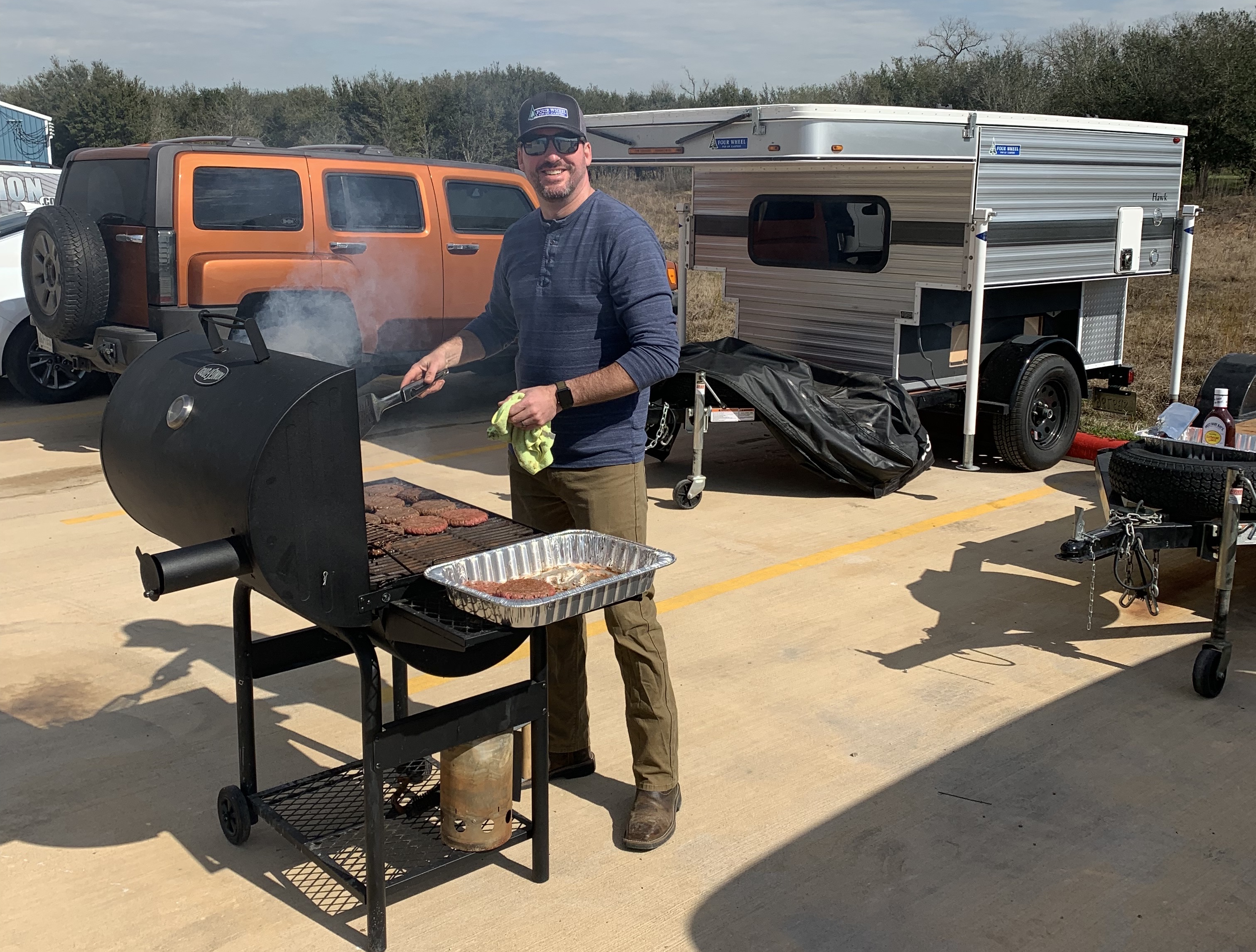 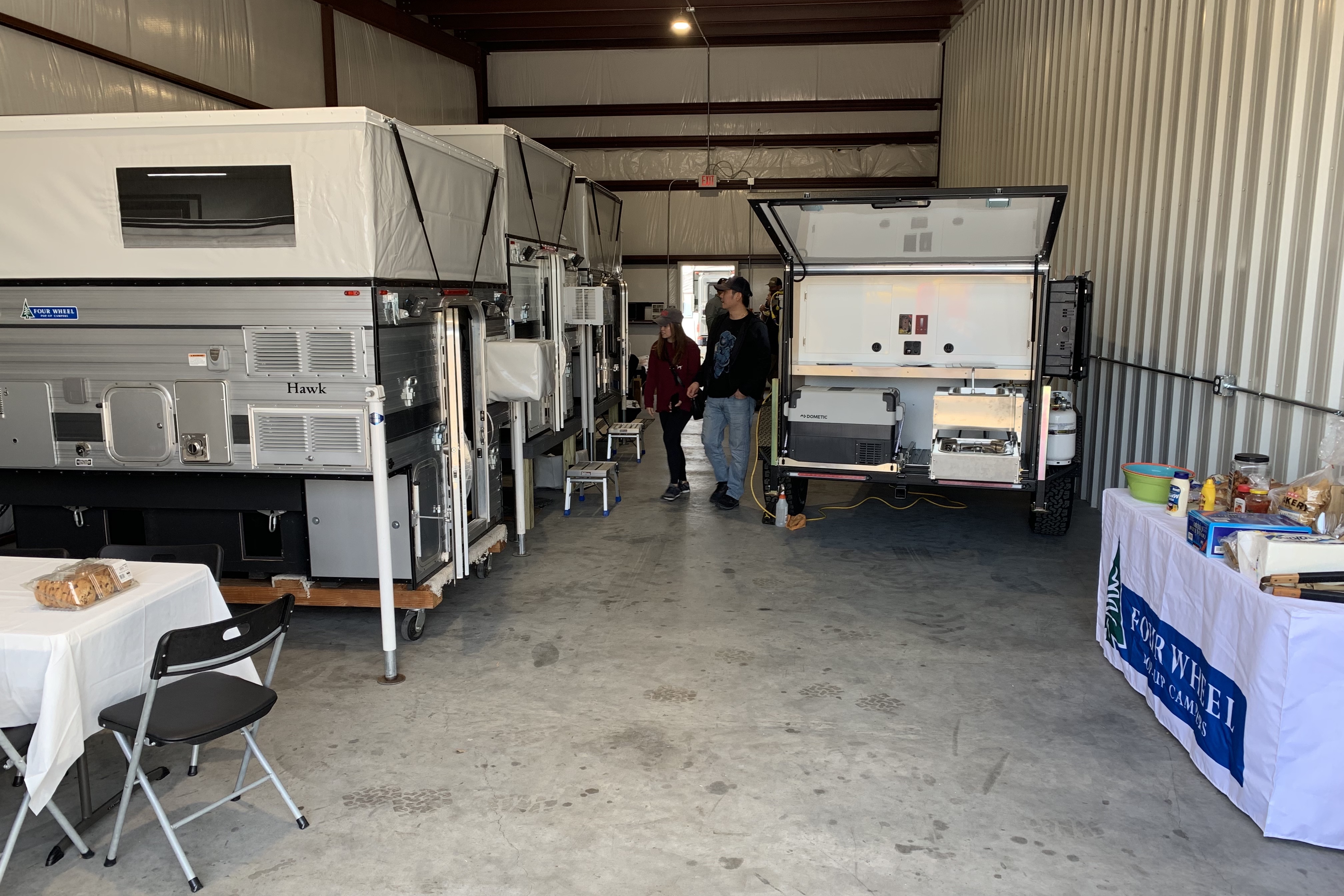 Constructed primarily out of aluminum, Four Wheel Pop-Up Campers makes the lightest and strongest campers in the market with most models weighing less than 1,200 pounds. Indeed, the lightweight and low center of gravity of a FWC pop-up makes them ideal for trucks of all sizes, including mid-size trucks like the Toyota Tacoma, half-tons like the Ford F-150, and special off-road trucks like the Ford Raptor and the Ram Power Wagon. Whether it’s a FWC Fleet or Swift for a mid-size truck or a FWC Grandby, Hawk, or Raven for a full-size truck, Four Wheel Campers makes a lightweight camper for your truck. They’re also one of the best values in today’s market with all models retailing for less than $20,000.

“We’re super excited to be here in Texas,” Dave explained. “There’s a lot of outdoor enthusiasts, hunters, fishermen, hikers, people who enjoy the outdoors here, so to be able to give them something comfortable to enjoy the outdoors is great. We have a ton of beaches and coastline here in Texas and being able to take your truck and off-road camper on that coastline is really a great opportunity because our beaches allow camping. So you can easily set up camp, stay the night, and wake up to the sunrise with coffee in-hand and enjoy the beach from the very beginning.”

“It’s pretty wide open here in Texas,” he added. “We have national forests here in the state and other areas in general. These campers also work great as a deer camp on a deer lease or on your buddy’s deer lease, if you don’t want to sleep in his dilapidated trailer, you can bring your own comfortable accommodations.” 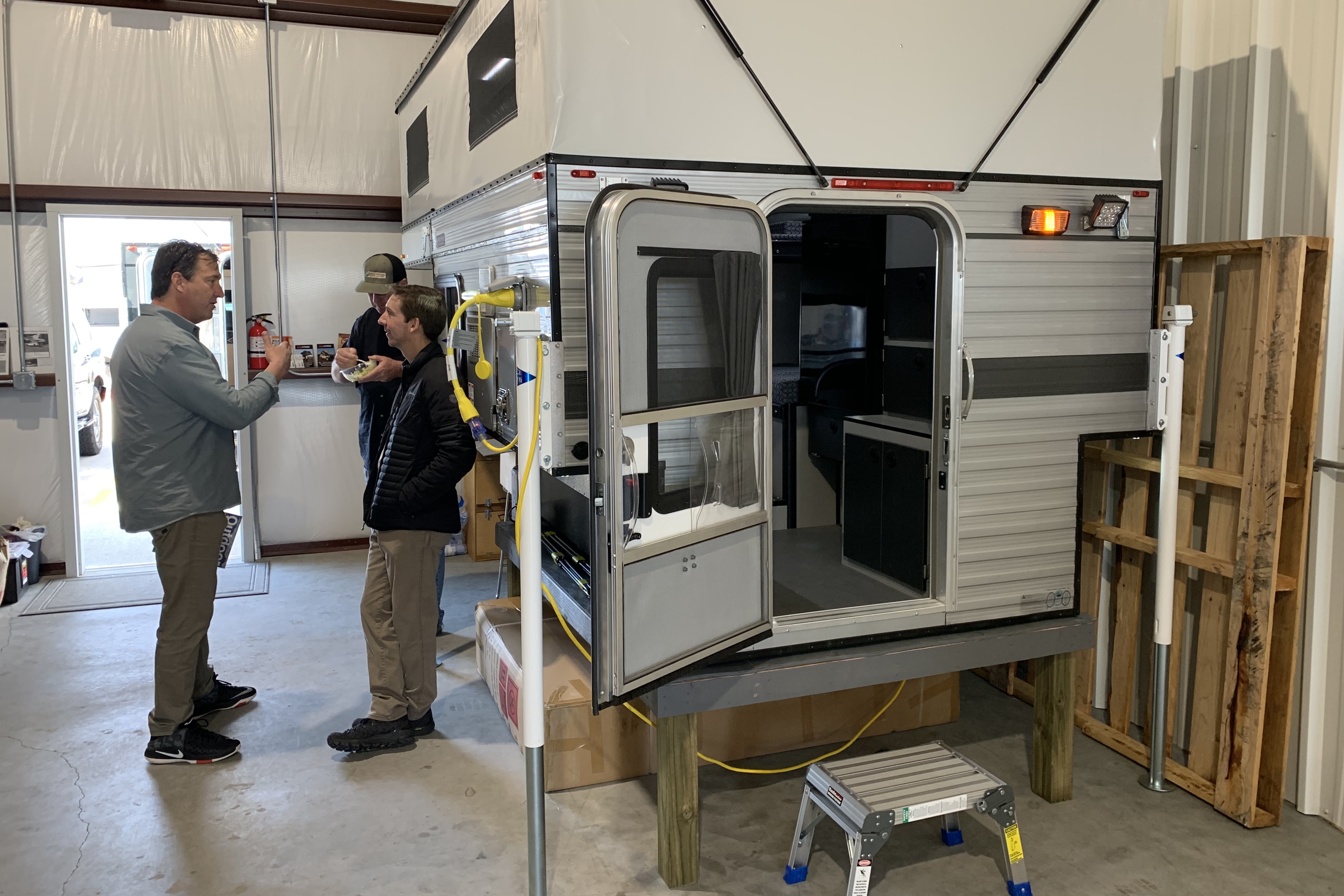 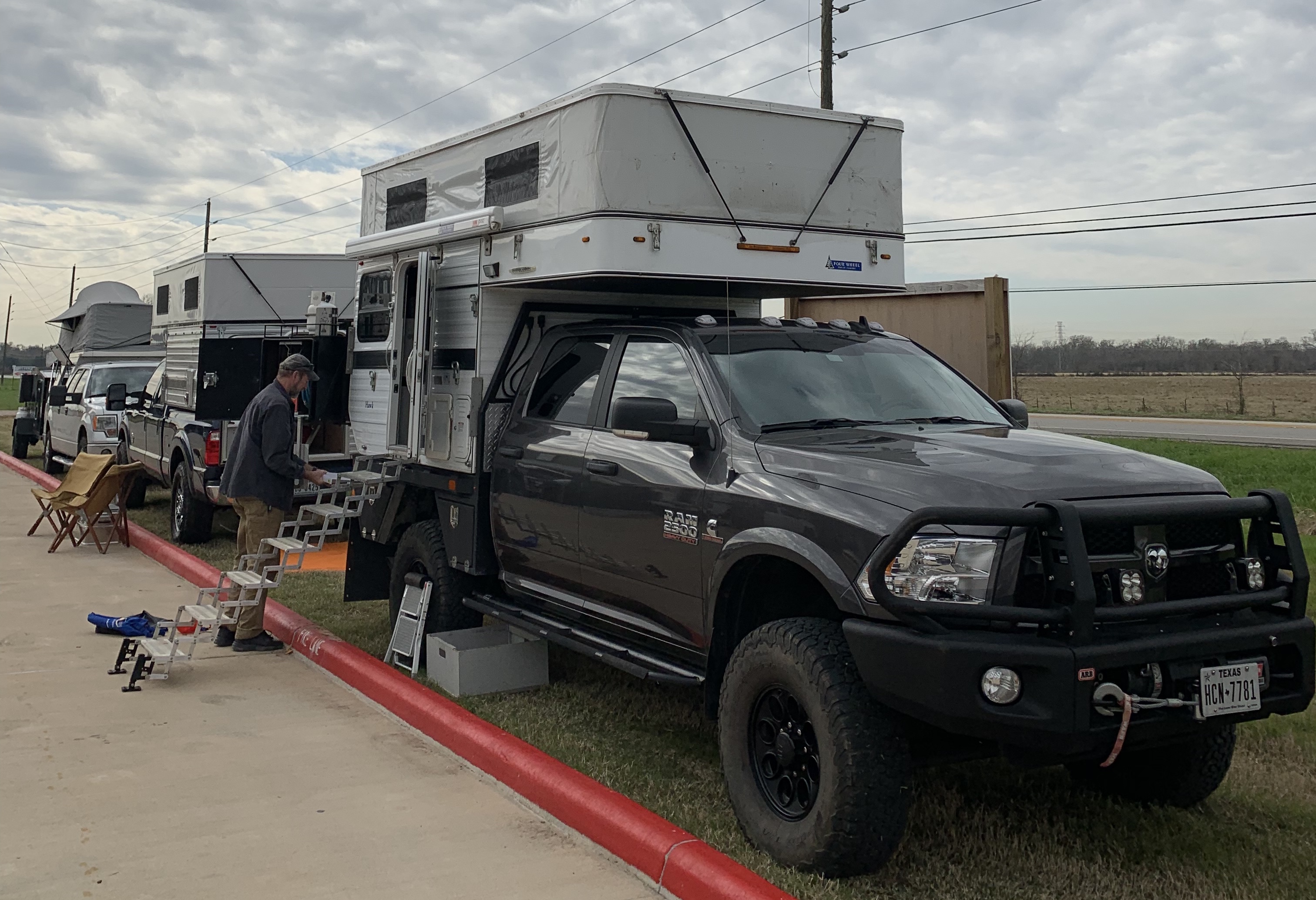 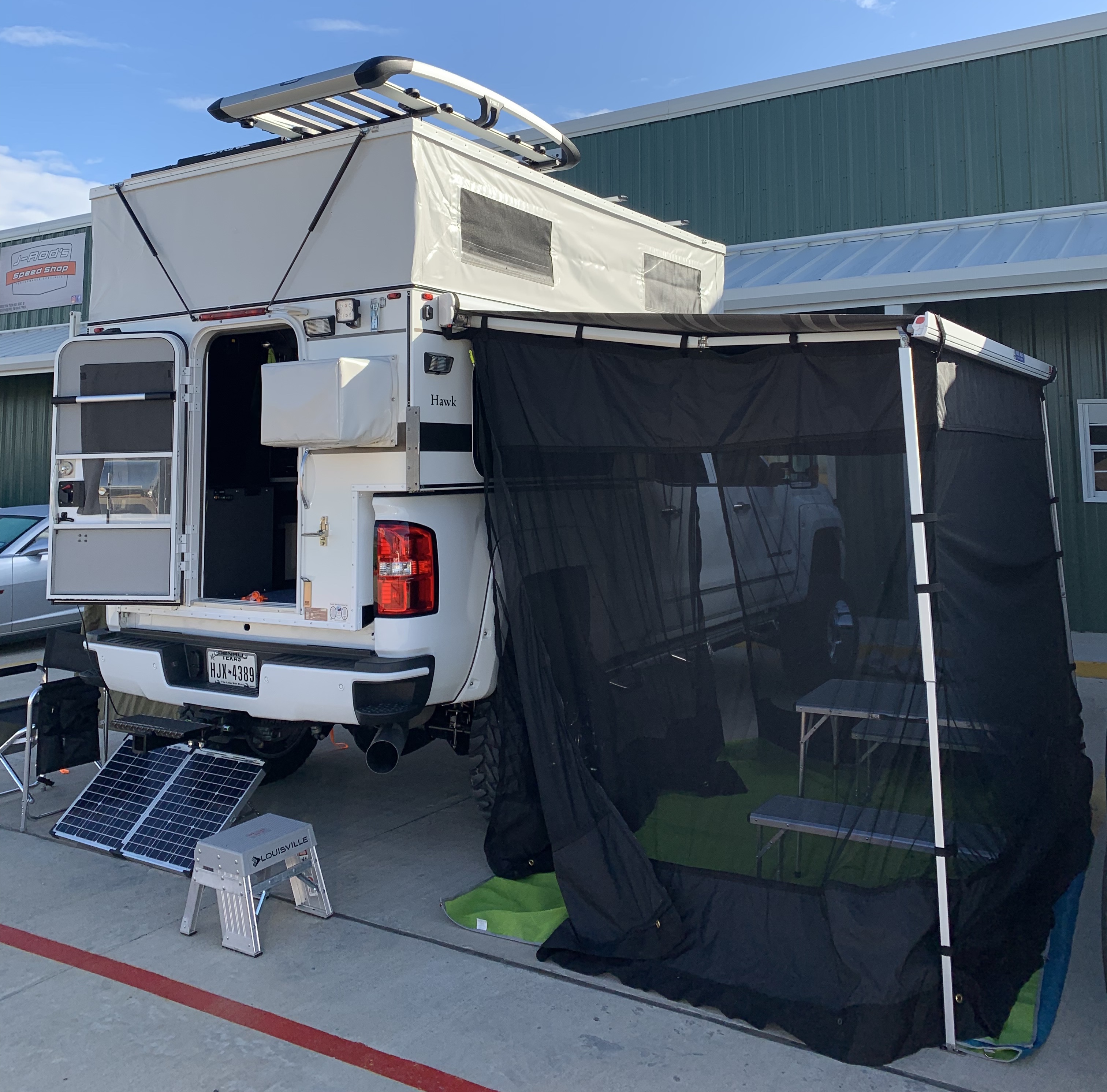 Of course, most who are contemplating the purchase of a Four Wheel Camper will want to get away from it all in their new camper. Seeing new places through off-road exploration and enjoying independence from campgrounds is what owning a Four Wheel Camper is all about. Fortunately, the brand new dealership is able to outfit all of its Four Wheel Campers with the latest gear and equipment to give new owners that independence. “All Four Wheel Campers come solar ready, so its just a matter of hooking up the solar controller and the solar panels and getting them hooked up to the batteries. We use Overland Solar equipment in all of our installs. We offer a 160 watt roof top option and two portable arrays, a 60 watt and a 120 watt model,” he explained.

So what’s needed to haul a Four Wheel Camper? Are suspension mods and other upgrades typically needed? That’s a question often asked by those who are contemplating the purchase of a Four Wheel Camper. “What we typically suggest and recommend is at least adding air bags to a mid-size or half-ton truck to help the rear suspension carry that load a little better, it helps level your truck so you’re not blinding people with your lights. We also recommend upgrading the tires to a Load Range D or E, a proper rating to handle that additional weight,” Dave said.

Boondocking can be a hit or miss affair. For us, it sometimes takes place in boring, entirely forgettable places. Sometimes, it’s just the opposite. Every once in a while we boondock in a location that [read more]