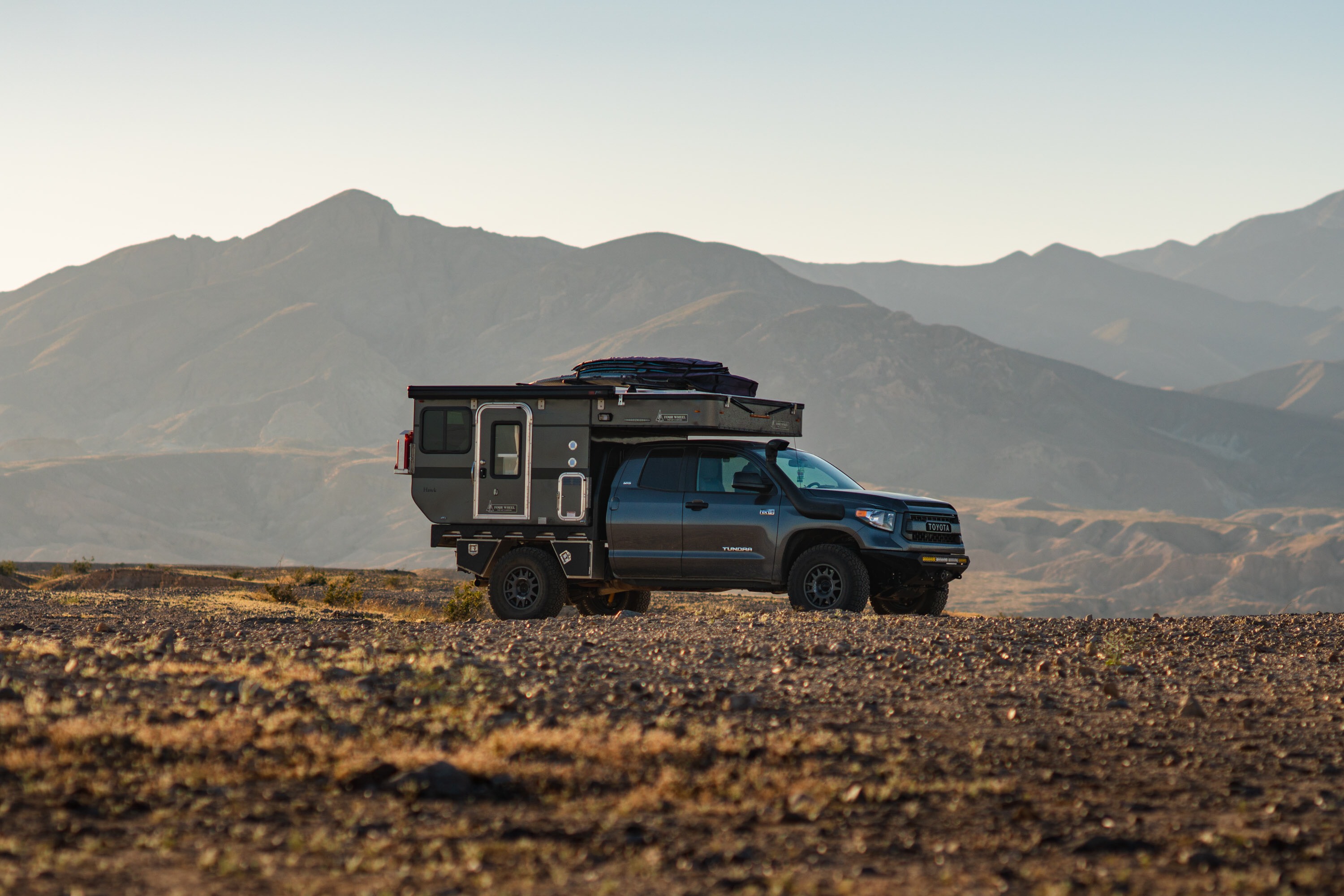 As for the winning photo, the picture was taken in California near the Salton Sea and Anza Borrego. “We had just got there. The sun was just going down and it was super windy, which is why the camper’s top was down,” Mary explained. The photograph was taken by Owen using a prime Nikon lens on a Sony A7R. The ISO setting was set for 100 and the focal length was 85.

The couple lives full-time in their Four Wheel Camper rig. It serves as their vehicle/office/living room/surfboard carrier/and cat palace for their 10-year-old adventure cat, Luna. Living on the road certainly has its perks—like saving money and seeing the world—but getting into a reliable rig hasn’t been easy for the active couple.

“We’ve been on the road for three years now and this is our fourth vehicle,” Mary explained. “We started out in a 1985 Volkswagon Vanegon and as much as we loved it, it required three engines from us in a year and a half, as so it started to suck us dry financially, but it was the one symbol of freedom and was the one thing that was really holding us back, so we really felt that we needed to find something a bit more reliable, a bit more stable, just because we are full-time and we work full-time on the road.”

“Our second vehicle was a 1985 Toyota Sunrader 4×4, it was super rare, the first domestic 4×4 RV ever made, and we spent nine months building it out only to realize that it wasn’t as capable off-road as we were wanting it to be. So then we switched over to a base model, four-banger Toyota Tacoma and just lived out of the bed of the truck for nine months, while we were kind of figuring out what was going to be next and so this is what was next. It’s the perfect combination of all of our different vehicles all rolled into one,” she said.

The couple are both free-lance designers and got married six months before hitting the road. Each is a graduate of Savannah College of Art and Design and met while competing on the college’s swim team. The couple is happy to report that they had just paid off their student loans, a huge accomplishment made possible by their low-cost, nomadic lifestyle.

“We have the theory that happy people make good work,” Mary said. “Even though it can be scary to trust a free-lancer who can’t sit down in front of you to do the work for you, we found that our clients really like working with us because I think we are happy and do good work and our travels inspire what we do.”

“Living full-time on the road was the best decision that we’ve ever made. We’re so happy and I wish that we could give a little slice of our happiness to everyone because it feels really good to be living the way you want to live,” she said.

Like Loading...
About Mello Mike 668 Articles
Mello Mike is an Arizona native, author, and the founder of Truck Camper Adventure. He's been RV'ing since 2002, is a certified RVIA Level 1 RV Technician, and has restored several Airstream travel trailers. A communications expert and licensed ham radio operator (KK7TCA), he retired from the U.S. Navy in 2004 as a CWO3 after 24 years, worked in project management, and now runs Truck Camper Adventure full-time. He also does some RV consulting, repairs, and inspections on the side. He currently rolls in a 2013 Ram 3500 outfitted with a SherpTek truck bed and a 2021 Bundutec Roadrunner.
Website Instagram YouTube

Vote Now for the Winner of the 2016 TCA Photo Contest

Truck Camper Adventure has received a total of 63 photo entries for the 2016 Off-Road Truck Camper Photo Contest and it’s time to vote! You may vote only once and you may vote for only [read more]

Enrollment in the third annual, 2022 Truck Camper Adventure Boondocking in the Desert Rally is now closed. The rally will be held in Quartzsite, Arizona, February 10-13, 2022. The owners of 300 campers have enrolled. [read more]

It’s not everyday that one suffers a truck camper rollover on an outing, but this is exactly what happened to John and Kara Beh on a recent trip to Sedona, Arizona. Fortunately, the couple suffered [read more]