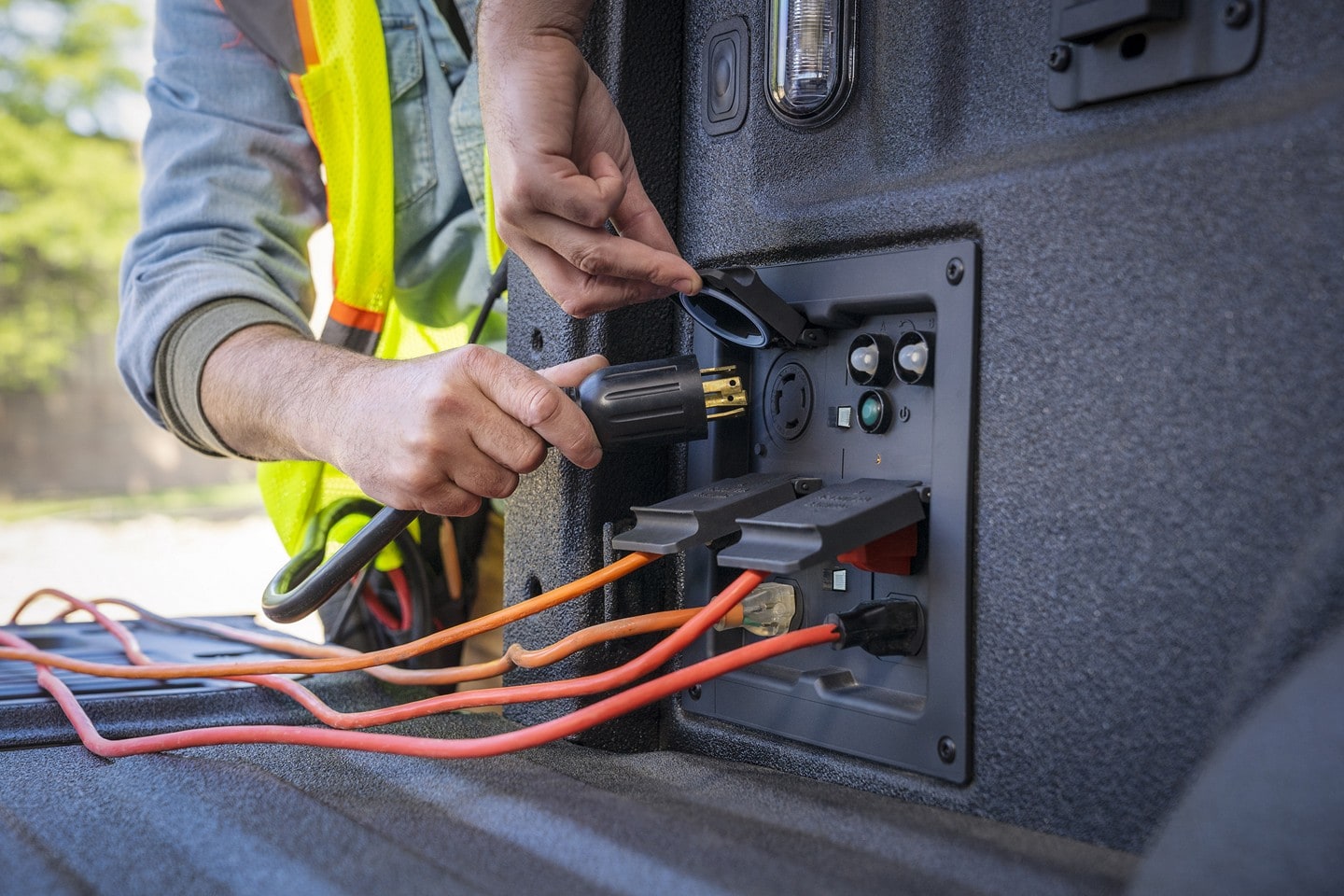 Two things we really like about the 2021 Ford F150: the payload and the power. The truck offers loads of both with an eye-popping 2,900-pound payload rating for the 5.0L V8 SuperCrew, and a brand-new generator option called the “Pro Power Onboard.” Eliminating the need to haul a portable, 47-pound generator, the Pro Power Onboard looks like a game changer, especially for RV owners who roll in a truck camper. This article takes a look at what the Pro Power Onboard is, how it works, the cost, and the pros and cons of having one.

Based upon the F150 and powertrain chosen, the Pro Power Onboard is available in three different sizes. A 2,000 watt version is available on optional gasoline-powered engines (2.7L and 3.5L EcoBoost, and 5.0L V8), while the PowerBoost hybrid F150 comes standard with a 2,400 watt version or an optional 7,200 watt monster. Power is accessible through in-cabin AC outlets and up to four cargo bed-mounted 120 volt 20-amp AC outlets, with a 240 volt 30-amp AC outlet on the 7,200-watt version. The system even provides power on-the-move to power refrigerators and charge cameras and laptops between campsites.

But wait, there’s more. Ford’s Pro Power Onboard is smart, allowing it to be enabled or monitored through the FordPass smartphone app or via the truck’s infotainment system. If you try to use too much power, the system disables itself and sends you a notification. Plus on hybrid models, the Pro Power Onboard will automatically turn-on the gas engine as needed to ensure consistent power flow without draining the battery. Better yet, the Pro Power Onboard generator system is completely separated from the rest of the truck’s electrical system, adding a layer of safety and ensuring that any power system problems will not impact the “drivability” of the truck.

Of course, putting 110 volt AC outlets in trucks and cars isn’t anything new. Auto manufacturers have been doing it for years. But these inverter outlets lacked power, typically 150 watt and 400 watt outputs—fine for things like cameras, TVs, and laptops, but not so good for high-amperage devices. The Pro Power Onboard changes all of that with a minimum output of 2,000 watts, high enough to run either a small truck camper air conditioner, a microwave, or a toaster.

How does the Pro Power Onboard work? The PowerBoost hybrid F150 gets its power using an appropriately sized pure sine wave inverter (either 2,400 or 7,200 watts) and the truck’s 48 volt lithium ion battery pack. The gasoline-powered F150 setup is different. It uses a whole new 24 volt electrical system using two conventional 12-volt batteries wired in series, a 2,000 watt pure sine wave inverter, and a second alternator for charging. This 24 volt system is completely separate from the truck’s primary 12 volt system. Since an alternator is needed to keep the two batteries charged, the engine needs to be running for the Pro Power Onboard to work. 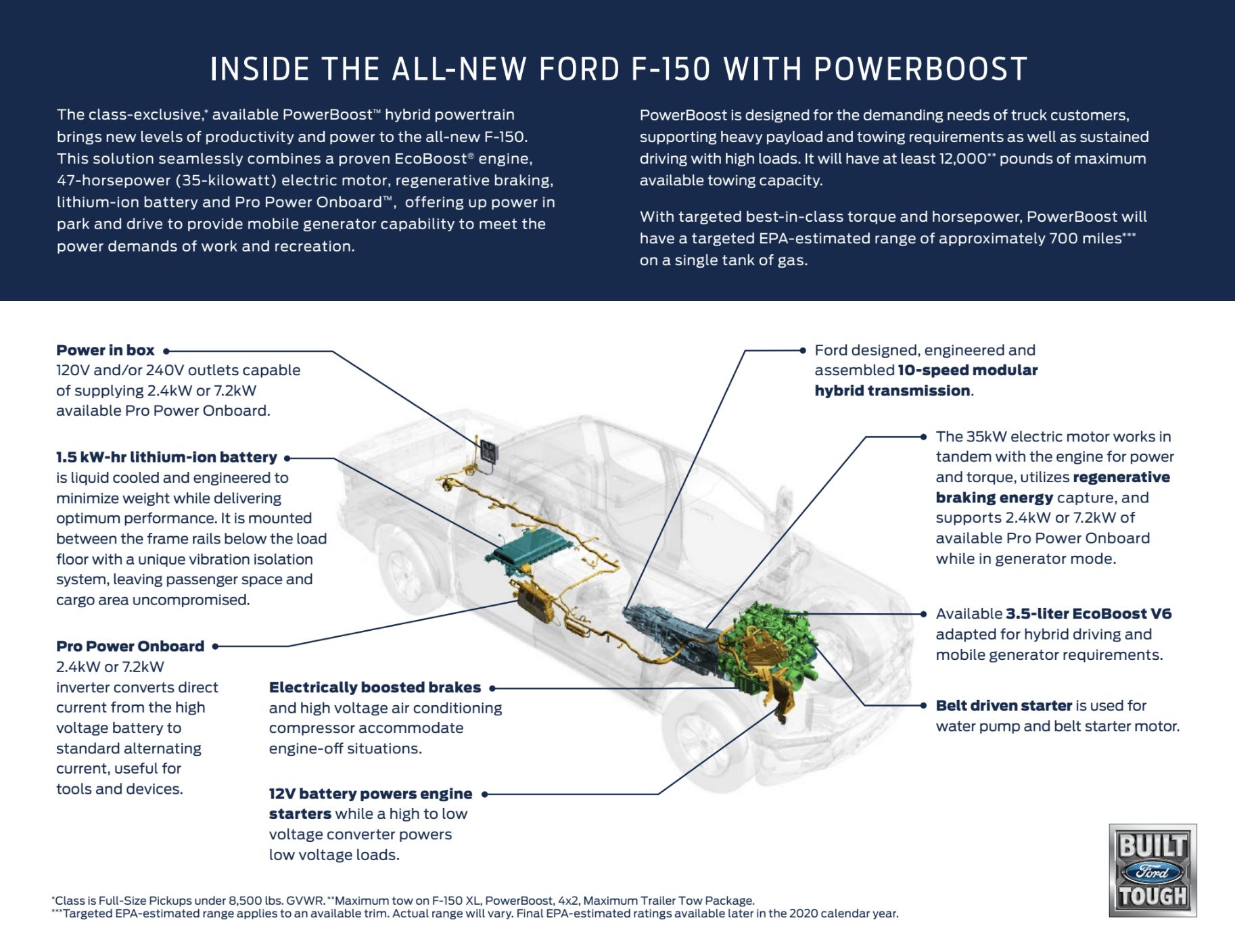 There is, however, a potential downside to the gasoline-engine configuration. Generating all of that power results in increased wear and tear on the engine. Owners who plan on using the system heavily will need to weigh the long-term effects on the engine versus a traditional generator that’s built for such use. On the other hand, those who plan on using the Pro Power Onboard occasionally—perhaps six to eight weekends a year—should be fine.

Invariably, some will ask, is the Pro Power Onboard a generator or is it an inverter? Like a Honda eu2200i generator, it’s actually both. It uses an inverter to invert the DC battery power to AC while the alternator keeps the batteries fully charged.

How much does it cost? According to the Ford Dealer Order Guide, the F150 Pro Power Onboard option for gasoline trucks is only $995, while the 2,400 watt version comes standard on all Ford PowerBoost hybrids. The 7,200 watt option is available for an additional $750.

As of this writing, Ford hasn’t announced whether or not the Pro Power Onboard will be offered as an option in the heavier Ford F250 and F350 trucks, but we think this will happen soon after engineering reviews and changes are complete. Just don’t expect to see the option on a diesel.

When it comes to truck campers and power, we believe the Pro Power Onboard is a game changer. A huge constraint for anyone hauling a truck camper and needing a portable generator is where to store it. Many truck campers lack the space. For those who camp with small generators, like the 47-pound Honda eu2200i, many employ either special storage boxes or hitch mounts like the Torklift Lock and Load to store it. With Ford’s new Pro Power Onboard, hauling and storing a portable genny is no longer a need—the generator is built into the truck. Of course, having such a system will reduce the F150’s payload a bit, the exact weight increase is unknown—perhaps 100 pounds?—but that’s something consumers will have to “weigh” (pun intended) when ordering from the factory.

Look for a follow-up review of the Pro Power Onboard here on Truck Camper Adventure soon. 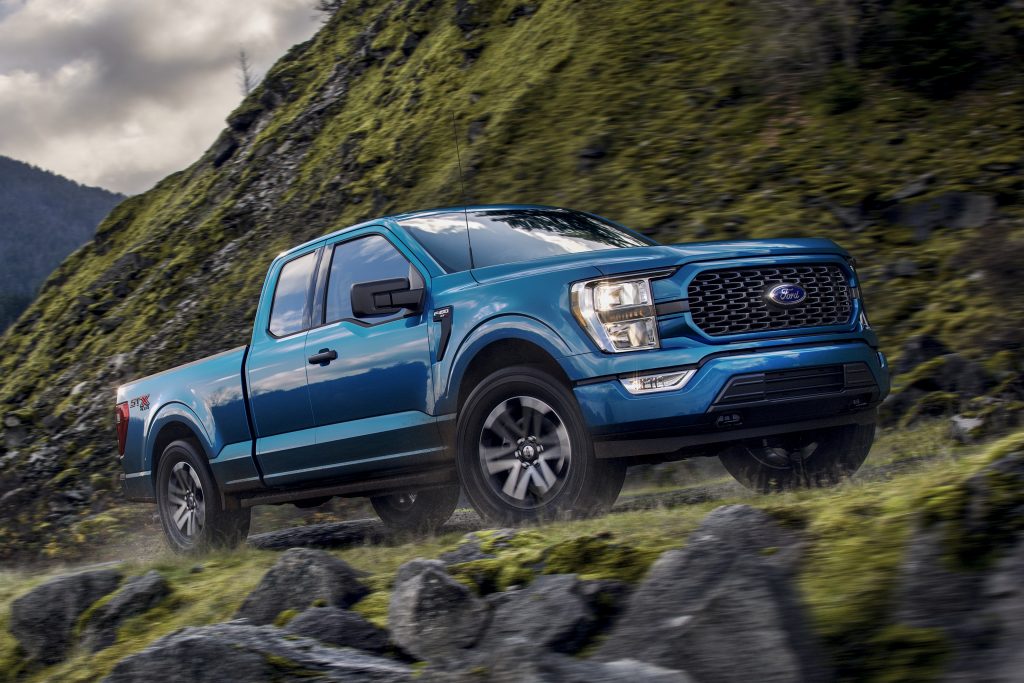 Without a doubt, one of the hottest selling items in the truck camper industry is the small pop-up made for mid-size and full-size half-ton trucks. It makes a lot of sense when you think about [read more]