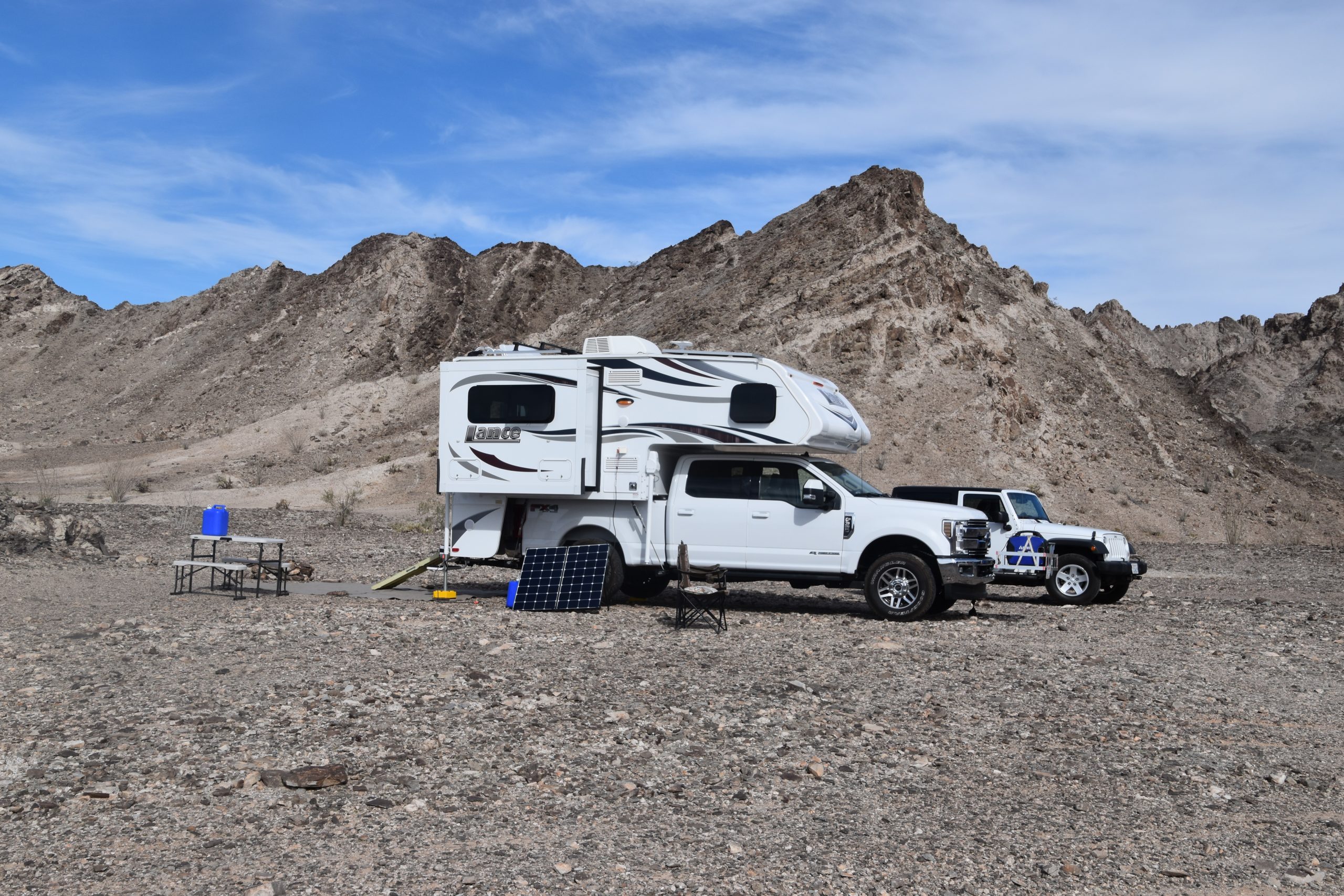 The Tumco Historic Townsite is an abandoned gold mining district located near Yuma, Arizona on Bureau of Land Management (BLM) land. The Tumco Townsite is one of the earliest gold mining areas in California, beginning when gold was first discovered by Spanish colonists as they moved northward from Sonora, Mexico. Tumco had a mining history spanning some 300 years, with several periods of boom and bust.

Initially, numerous small mines were operated by Mexican settlers for many years. After the Southern Pacific Railroad completed the Yuma to Los Angeles rail line in 1877, mining companies moved into the area, which purchased claims and developed the mines on a large scale. A 12-mile wooden pipeline delivered 100,000 gallons of water from the Colorado River per day. Originally incorporated in 1894 as Hedges, the town was abandoned in 1905. The United Mines Company renamed the town Tumco in 1910, as they unsuccessfully attempted to profitably mine the area. By 1911 Tumco was abandoned again. Over the years others sporadically attempted to work the mines until 1947, when the Townsite became a ghost town for good. No complete buildings remain standing today; however, the abandoned mines, foundations, cyanide vats utilized to process gold and cemetery are interesting to explore.

We visited this area in mid-January 2021. We were pleasantly surprised to experience such a great dispersed camping experience off the beaten path, yet fairly close to services should you desire them.

The geography is reminiscent of the Roadrunner Wash BLM camping area, the site where Truck Camper Adventure holds its annual boondocking rally near Quartzsite, Arizona, including the rocky soil, affectionately known as “desert asphalt.” Even though it wasn’t very windy during our visit, the rocky soil eliminated dusty conditions. The weather was near perfect—high 60’s during the day, mid 50’s at night. There is virtually unlimited space for truck campers even though there were less than 10 RVs occupying the entire area, allowing for ample space between campers. The area could easily accommodate any size RV.

Since we have a high clearance, 4WD truck camper, we found a great campsite approximately one 1 mile east of Ogilby Road. Our campsite was so secluded we could not even see our closest neighbors. In fact, we spent five nights at this location and only saw one vehicle pass by our campsite on the nearby dirt road. Our campsite featured the rugged Cargo Muchacho Mountains to our east and the Algodones Sand Dunes in the distance to the West. As a bonus, we even had two bars of Verizon cell service.

During our visit we enjoyed hiking the Tumco Townsite Historical Ruins (1.5 miles self-guided tour) and adjacent abandoned mines. We also enjoyed exploring some of the other numerous abandoned mines in the area during our visit, since we were always in total seclusion. It’s easy to imagine the harsh life miners endured while working and living here so many years ago. On one of our hikes, we were fortunate to see four desert bighorn sheep easily scrambling up a rocky mountain slope after they spotted us. The Tumco area features other nearby mines and virtually unlimited, 4WD/ATV and hiking opportunities.

Our campsite was approximately 1 mile from Ogilby Road. Easy to access with a truck camper (we were the only truck camper there during our visit). As you enter the Tumco area about 1/4-mile in you will see the mining district several hundred yards on your right. Continue on the road bearing left past scattered RV’s. We drove through a small wash (may have been an issue for low clearance trailers/motorhomes) before finding a great secluded site with plenty of options.

There were plenty of hiking options from our campsite, the two most memorable were the following:

There are no services at Tumco. This is boondocking country at its finest. Empty your gray/black tanks, bring plenty of water, and pack out your trash. Free (paid by California’s exorbitant DMV registration fees and fuel taxes) dumpsters and a threaded potable water spigot are available at the Buttercup Rest Area, located on I-8, in the center median, about two miles west of Ogilby Road. Additionally, the Sunbeam Rest Area in El Centro, on I-8 approximately 40 miles west of Ogilby Road, offers potable water, a dump station and rinse water (no dumpsters) both eastbound and westbound.

The Gold Rock Ranch RV Resort, located 1-1/2 miles west of Tumco, offers full hookups (30/50 amp), laundry facilities, showers and/or a place to refill water tanks along with an RV dump station. Additionally, a small store and museum are available (per website). We didn’t visit the resort; however, it was visible in the distance from Ogilby Road.

About Steve Stracke 3 Articles
Steve is a truck camper enthusiast who enjoys the great outdoors. He is currently retired and lives in California with his wife. He owns a Lance 855s.

Disposing of gray water is one of the biggest challenges you’ll face when boondocking in the wild. If you’re like most RV’ers, you’ll generate far more gray water than black water. Fortunately, there are several [read more]

Truck Camper Trumps Other Types of RVs Even Vans