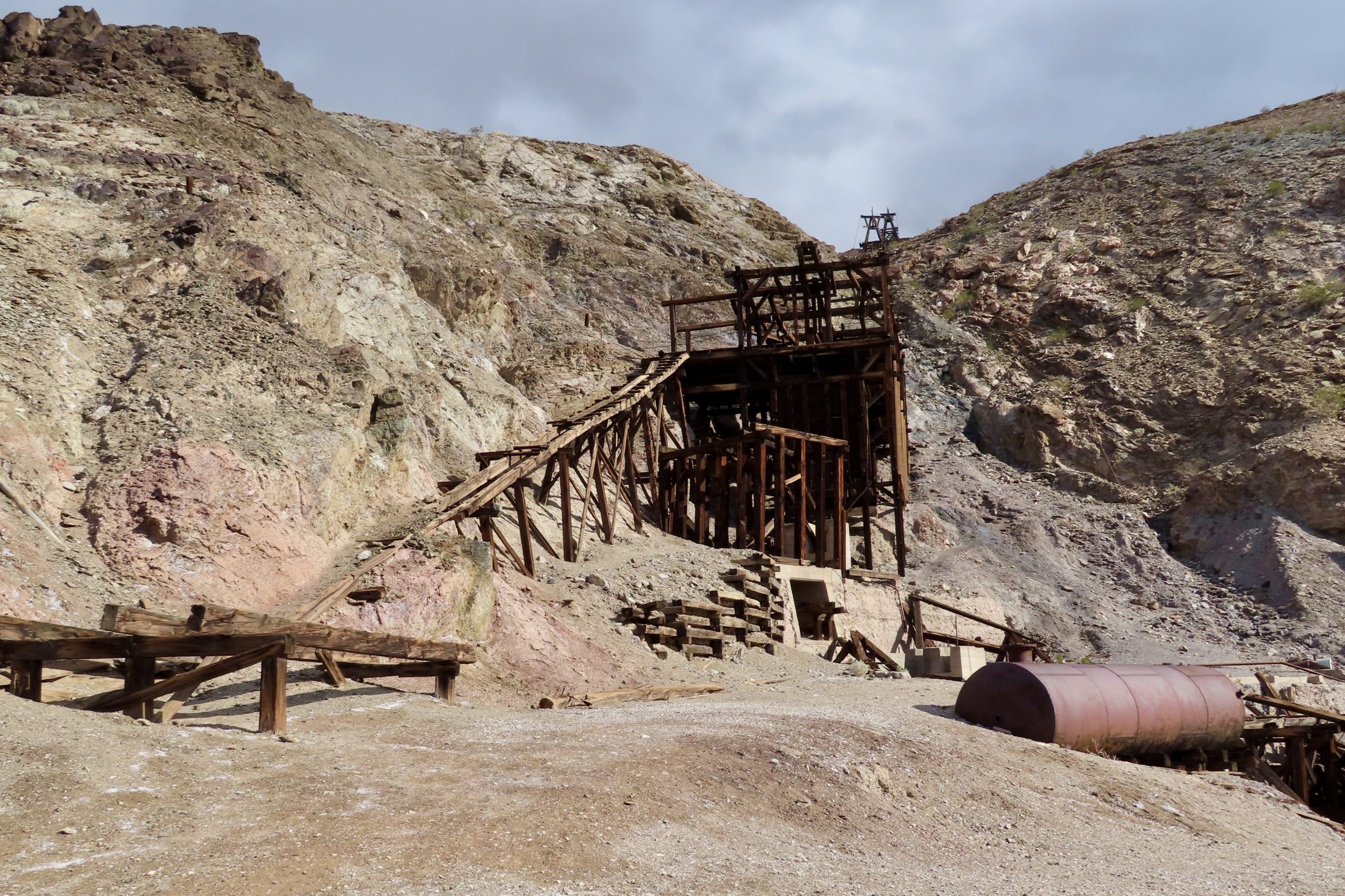 Death Valley is the largest national park in the contiguous United States encompassing 3,422,024 acres, and is the hottest, driest and lowest of all national parks in the United States. Approximately 93 percent of the park is a designated wilderness area. During our visit in mid-March 2020, we experienced the vast diversity of Death Valley from snow-covered peaks to expansive sand dunes. Most of our exploring was done by Jeep. 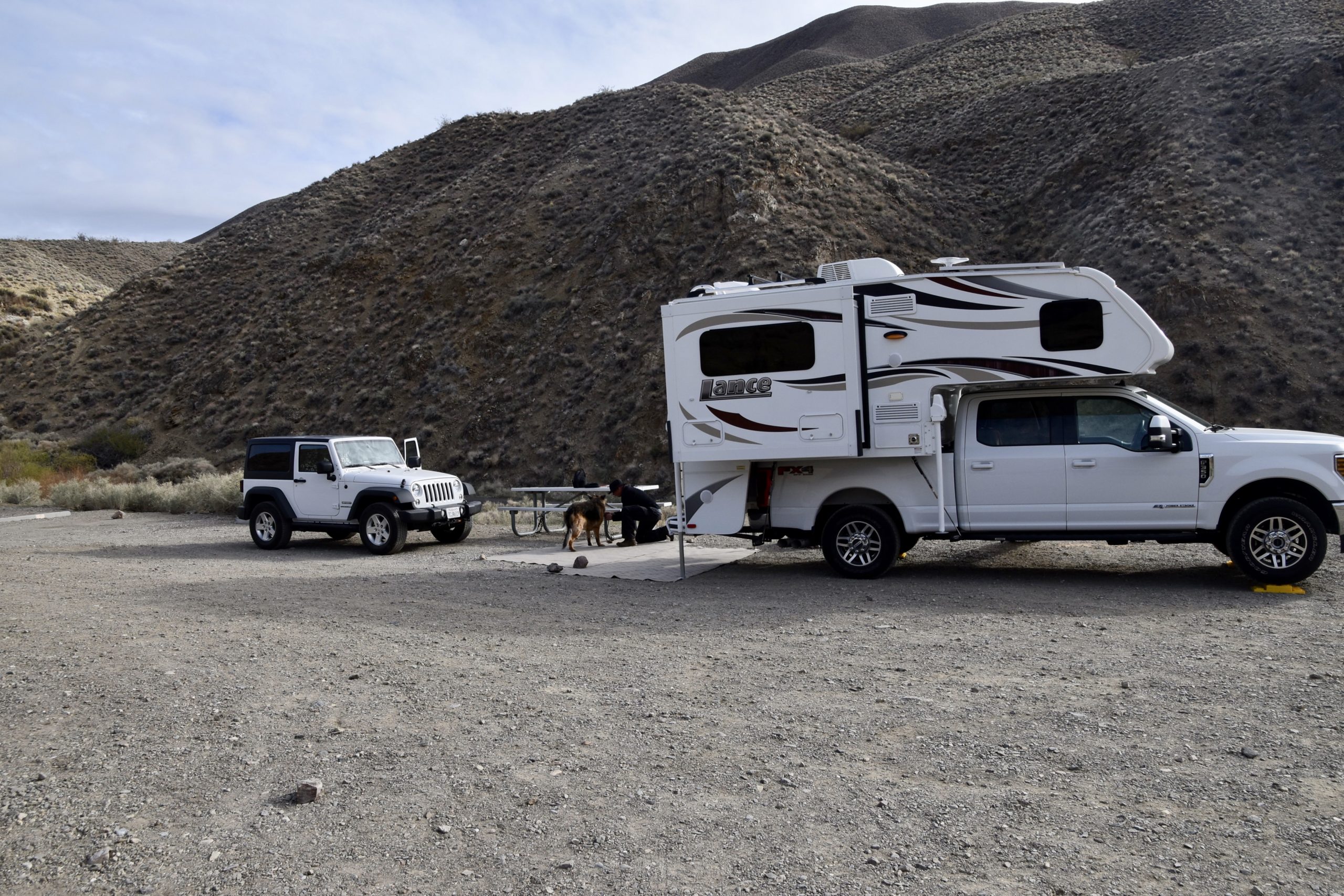 Trona – nearest little town with a lot of boarded up buildings. Borax Mineral factory, is the main source of employment.

Trona Pinnacles National Monument: Steve took the jeep on a day trip to the Pinnacles, Ballart, then continuing north to Indian Ranch Road (dirt road across desert for 12 miles, no other persons/ vehicles observed). Trona Pinnacles would be an excellent place to boondock in a truck camper. 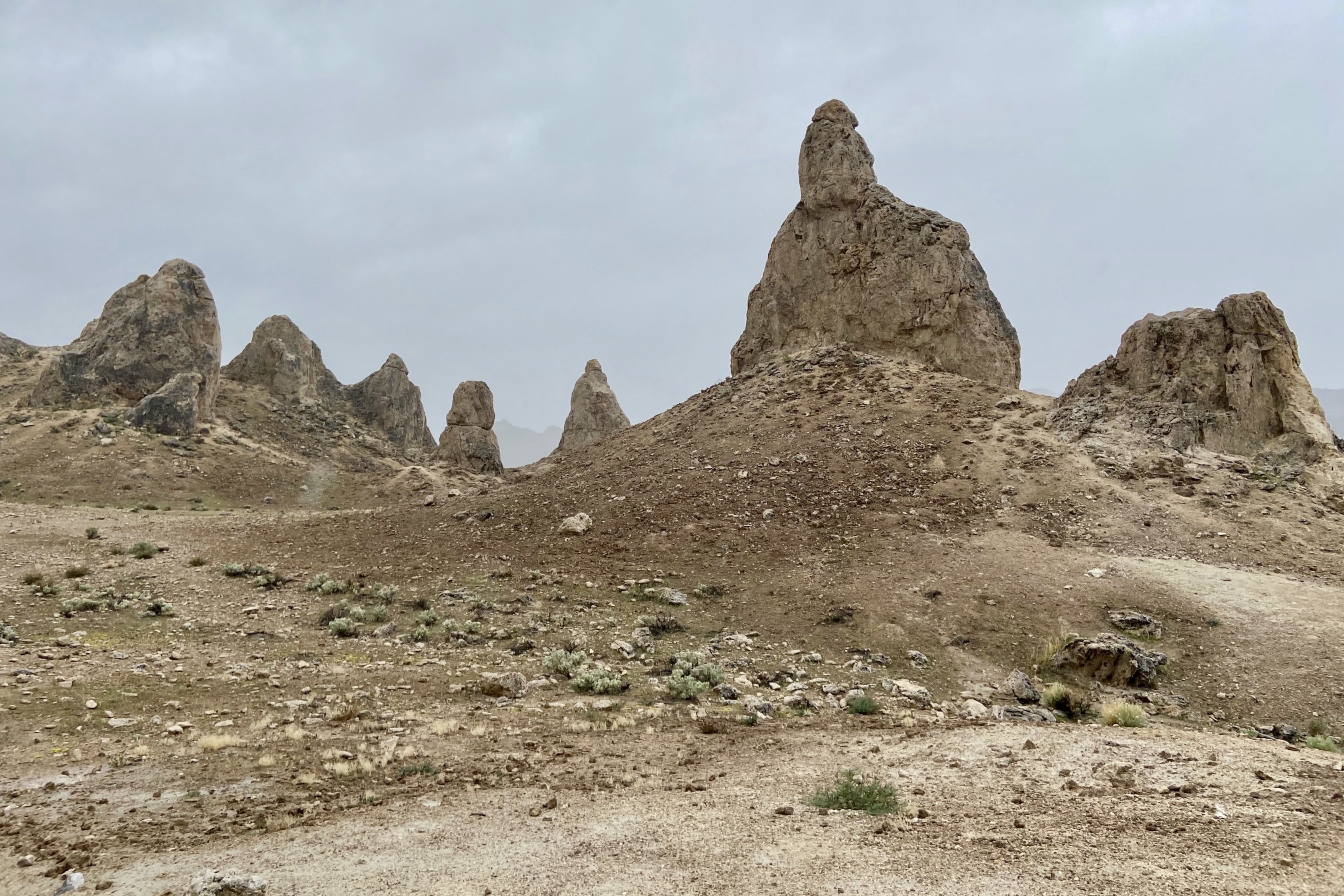 Eureka Mine: This old mine sustained Pete Aguereberry’s life for 40 years. Emigrated alone from France in 1890 at age 16.  Fascinating history. 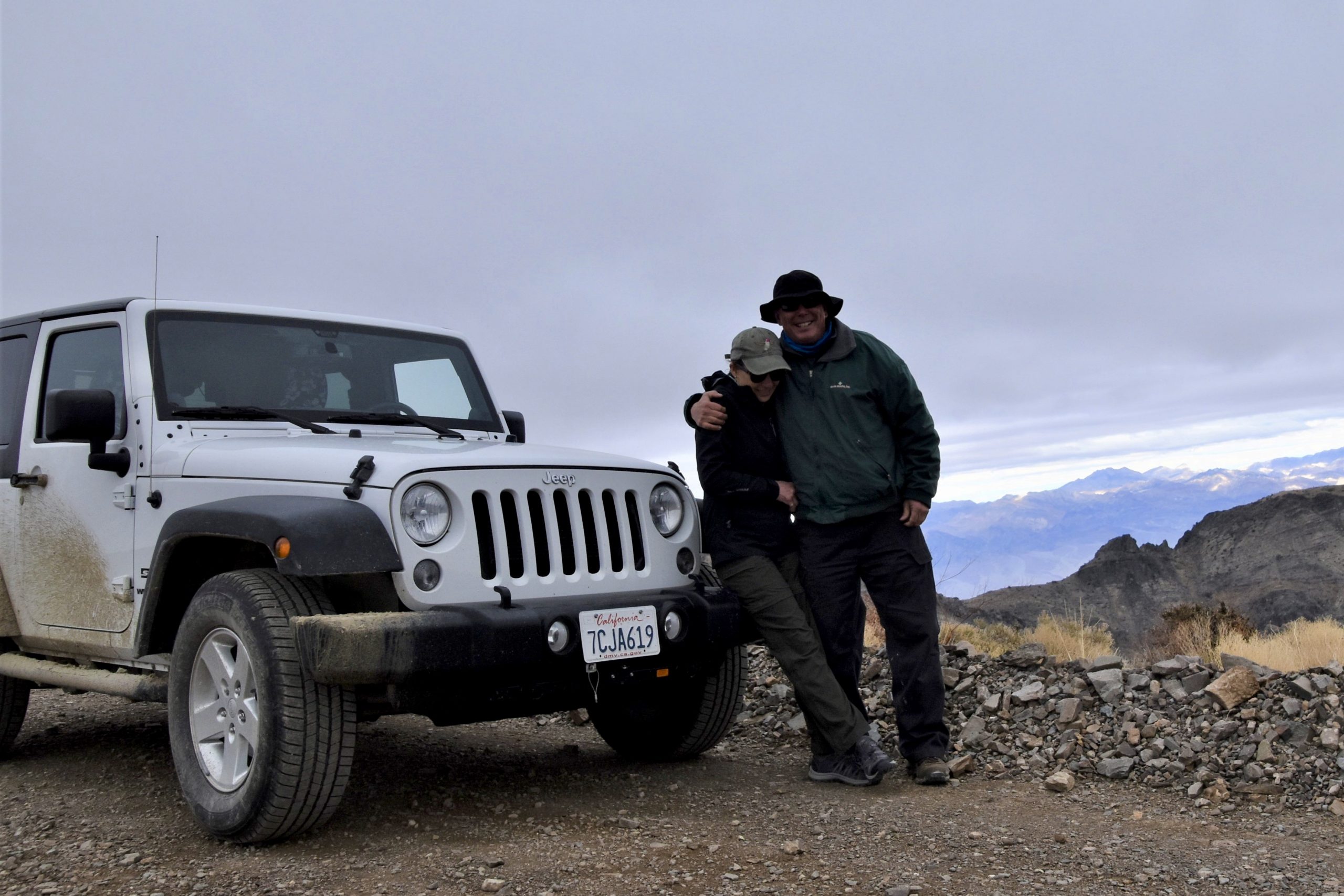 Charcoal Kilns: Rob and Tracy met us at Wildrose and we ventured on to see the Charcoal Kilns. Built in 1876, these ten beehive shaped structures are among the best preserved in the West. They produced charcoal for the Modock mine smelter, 20 miles away. Wagons carried the charcoal to the furnace (Modock Mine) to extract silver, owned by George Hearst. These kilns closed down three years later. 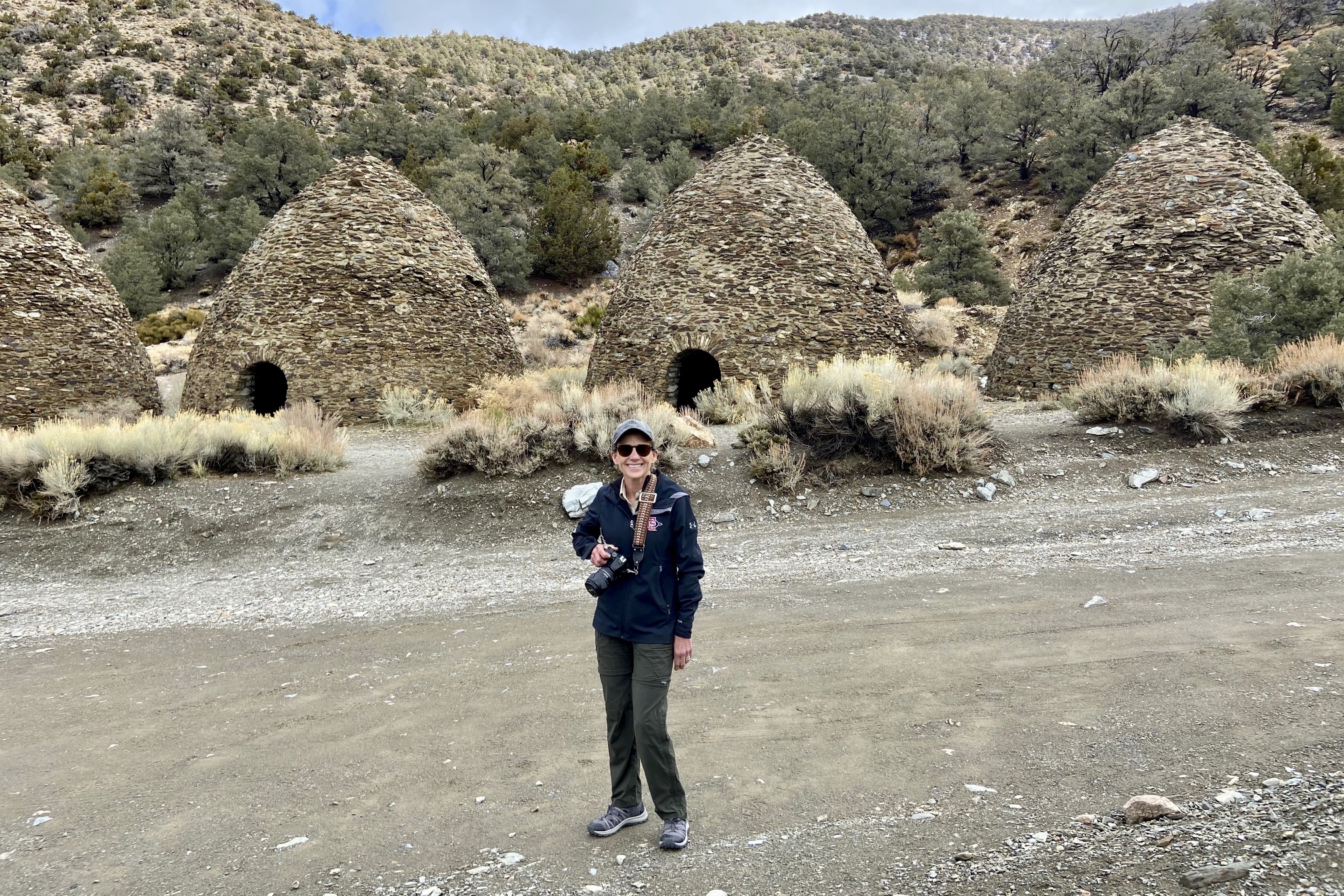 Furnace Creek campground. On to the aptly named Furnace Creek campground for remainder of the Death Valley trip. Only campsite in area that takes reservations, which fortunately we had as it books up way in advance. About 20 degrees hotter than Wildrose and very different campsite experience. Furnace Creek is less primitive with amenities such as dump station, restrooms, H2O, visitor center.  Rob/Tracy’s camp was in the tent area (truck with popup tent), us in the RV area (#14).  Very nice campground, located close to most popular attractions.

Artist Palette: incredible view of multi-hued hills.  Over 5 million years ago, repeated volcanic eruptions blanketed the landscape, depositing ash and minerals which were chemically altered by heat and water. Elements of iron, aluminum, magnesium and titanium have been identified, but no copper.  This beautiful wonder is truly a natural artist’s palette of color.  Absolutely stunning!! 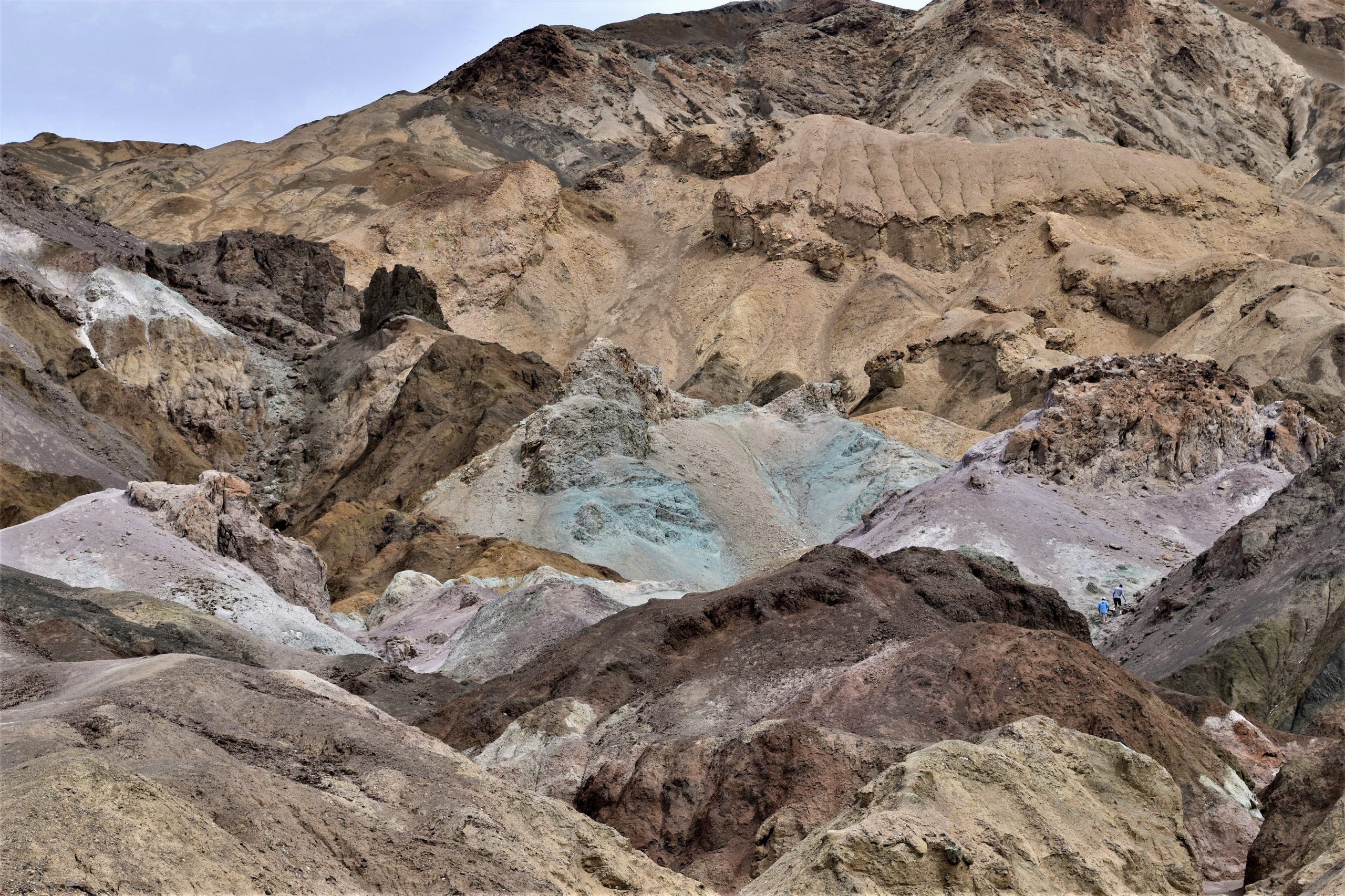 Harmony Borax Works was the central feature in the opening of Death Valley and the subsequent popularity of the Furnace Creek area. This historical mining site processed borax ore from about 1884 to 1888.  The famous 20-Mule Team wagons transported the ore across the desert 165-miles to the Mojave Railroad Depot. 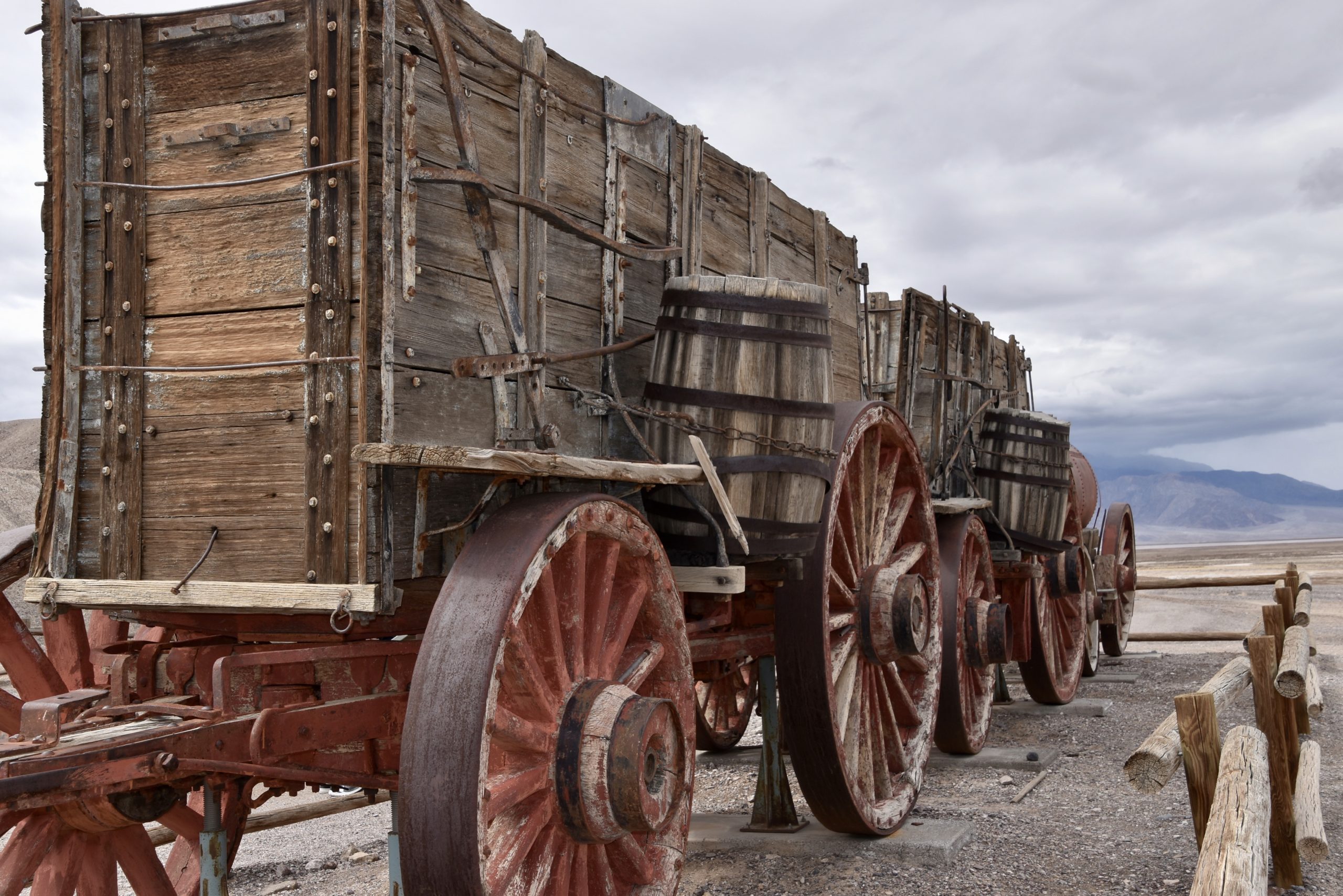 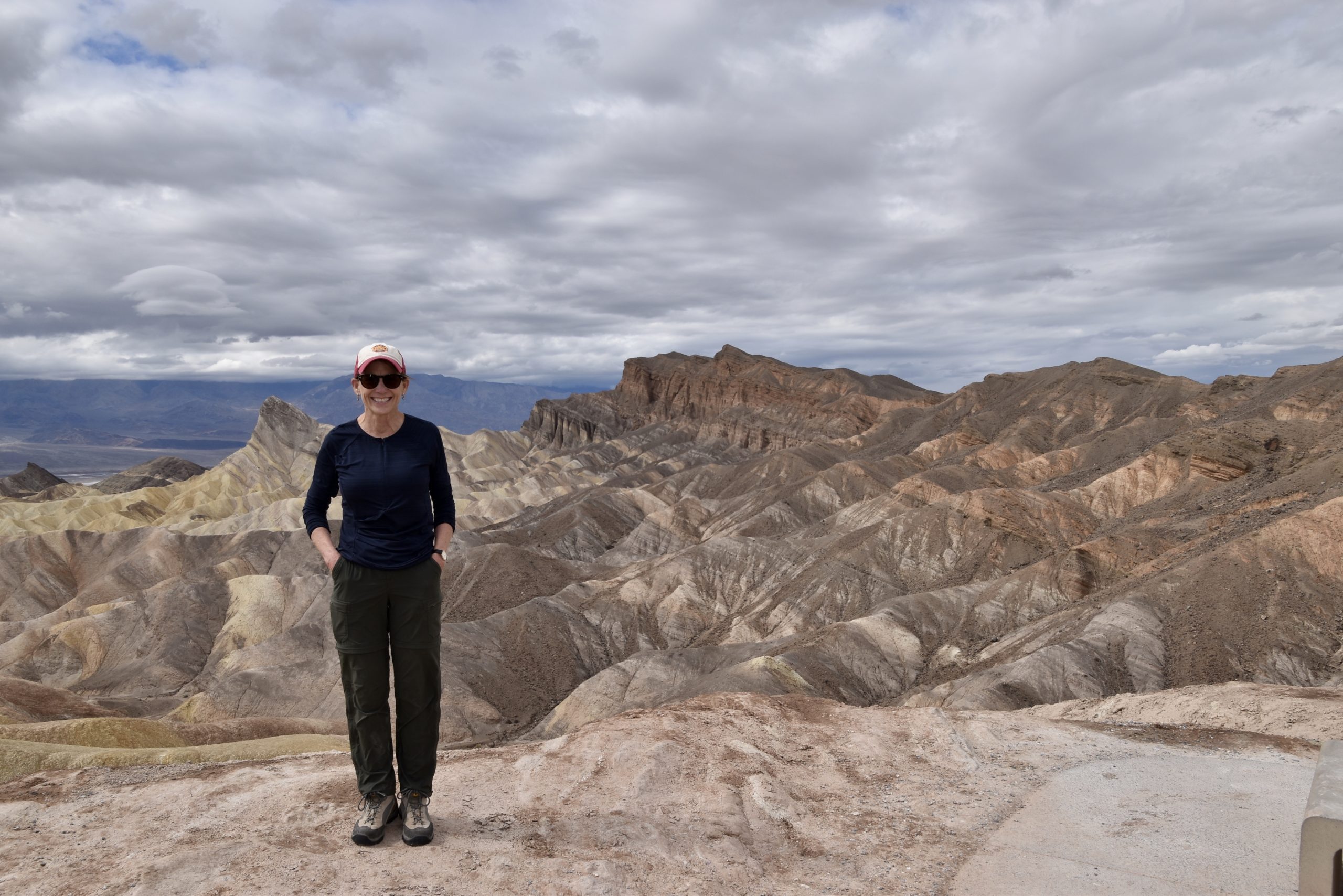 Keane Wonder Mine: Death Valley was known for its extreme conditions and potential as a place to strike it rich. Claims were staked in December of 1903, and by 1907 the mine was in full operation. At its peak, 70 tons of gold ore a day were produced.  By 1912 the value of the  Keane Wonder Mine ebbed with the lack of raw materials to continue mining profitably and by 1942 the last attempt to continue operations came to a close.  Adjacent to the parking area, is access to the lower tram terminal and the first few tram towers.  Continue up the steep trail, approximately 1,500 feet in 1.4 miles, to the upper tramway terminal and the Keane Wonder Mine.

Inyo Mine: Echo Canyon Road traverses approximately 12 miles up the canyon to the Inyo mine. The canyon walls narrow dramatically before eventually passing a natural arch.  As the canyon widens numerous abandoned mines come into view before the road ends at the Inyo Mine ruins.

Rhyolite Ghost Town enjoyed an incredibly prosperous period for a few years following the 1904 gold discovery in the nearby hills.  Tents were soon replaced by elaborate stone and wood framed buildings, two railroads were built along with a stock exchange, hotels, ice plant, opera house and churches.  It’s estimated as many as 10,000 people frequented the modern bustling community. The city began its decline in 1907, the Montgomery-Shoshone mine closed in 1911 leading to the settlements demise.  Today only a few stone and concrete buildings, the old railroad depot, and the Tom Kelly Bottle House remain.

Titus Canyon is the most popular backcountry road in Death Valley National Park. The 26-mile-road crosses desert terrain, climbs steep grades and switchbacks to Red Pass, elevation 5,230 then begins a long, gradual descent into Death Valley through the Grapevine Mountains.  During the last 1.5 miles the canyon walls squeeze down to less than 20 feet apart in some places.  Along the way we encountered the remnants of Leadfield, an example of a short-lived mining town preceded by exaggerated claims of abundant lead strikes.  Prospectors and investors soon flocked to the area.  In 1926 a US Post Office was built. Within seven months the mines played out and Leadfield soon became a ghost town. 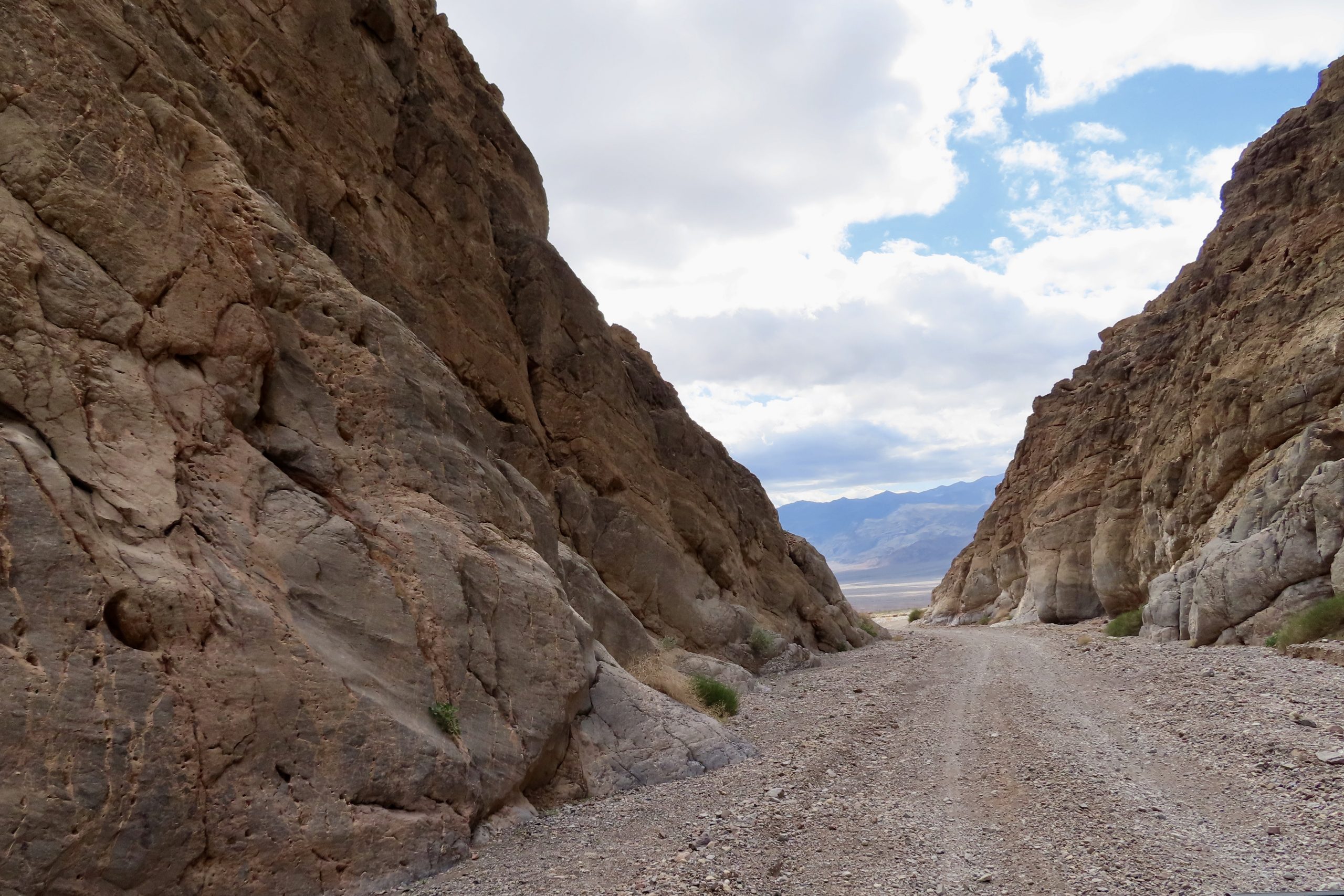 Ubehebe Crater was caused by a steam and gas explosion when hot magma rising from the depths reached groundwater. Various estimates of the crater’s age range from as recently as 300 years ago to approximately 2100 years ago.  The crater measures nearly a half-mile wide and 600 feet deep.  It was very windy during our visit, but a site that shouldn’t be missed. 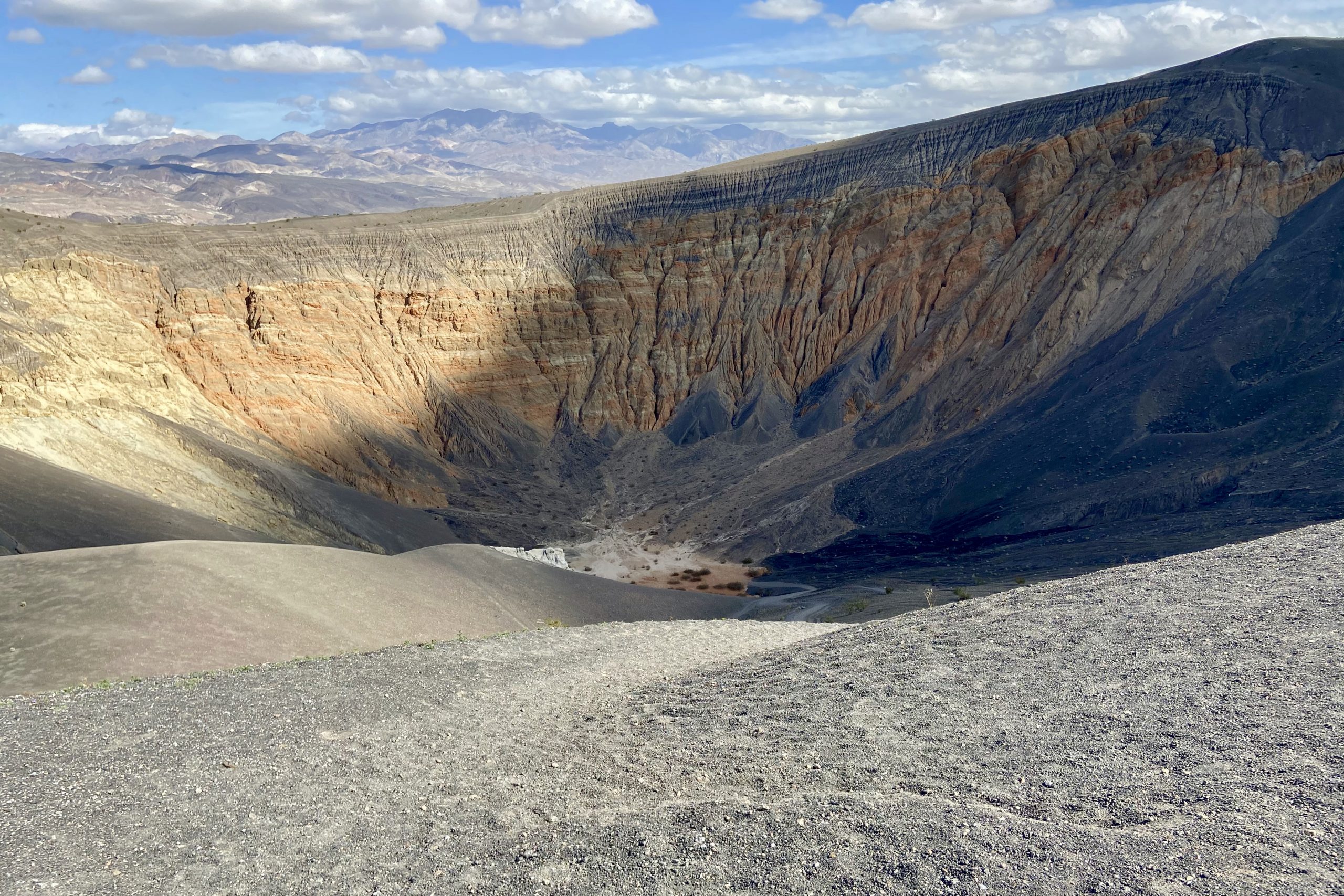 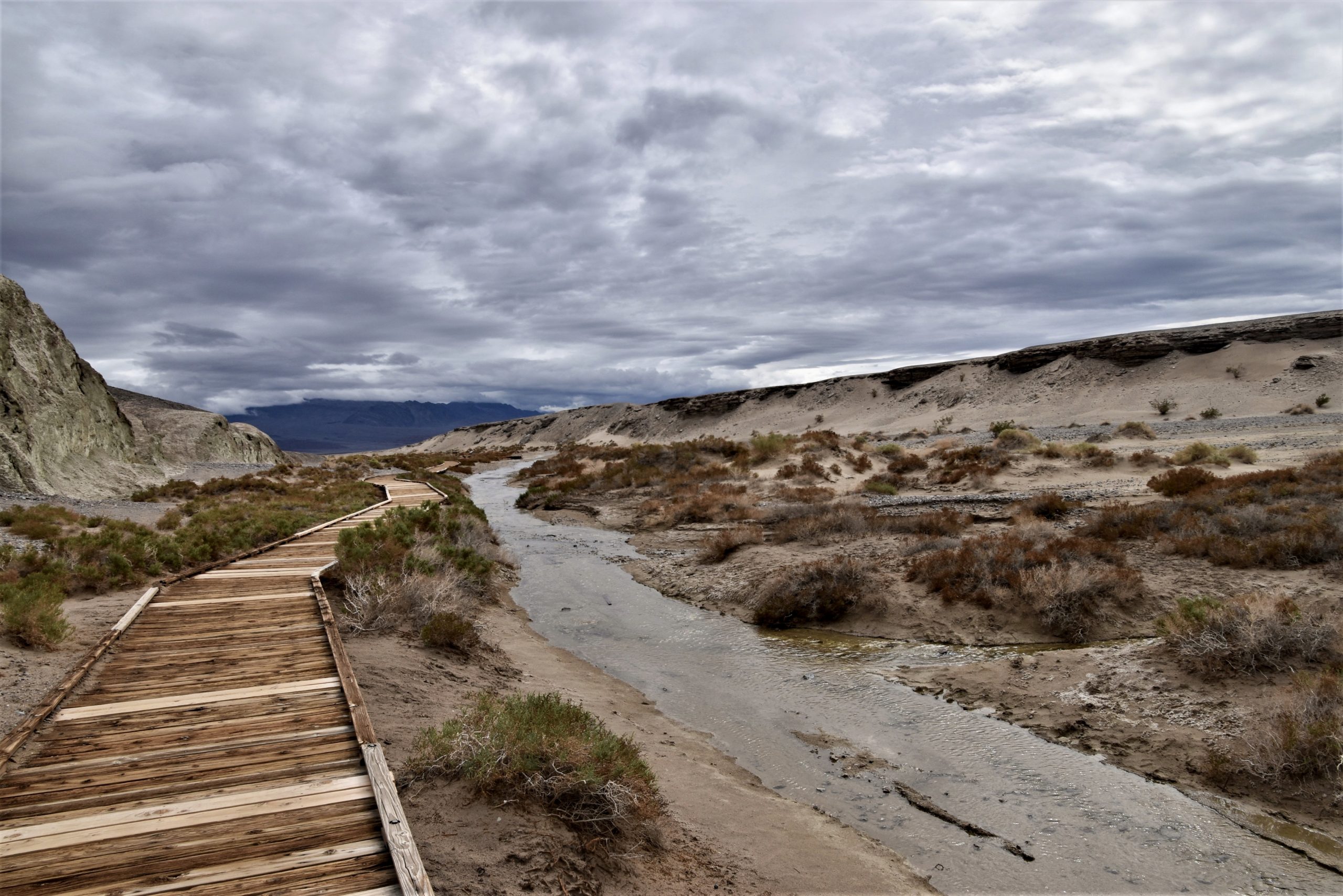 All of the above described locations were accessible in a high clearance 2WD during our visit.

We all headed home on the same day. Steve and I originally planned to stay a couple more days but the winds were really kicking in.

Internet was sketchy in Death Valley so we did not pay much attention to the daily news. Upon returning home, unbeknownst to us, coronavirus was in full impetus. All Death Valley facilities closed down soon after.

So grateful we were all able to take this fascinating, wonderful adventure and to share it with Rob and Tracy.  Rob was our personal Death Valley Tour guide and thank goodness for that!

We were amazed by the beauty of Death Valley.  We will return!

About Rita Silver 1 Article
Rita enjoys exploring in her Lance 855s truck camper along with her sidekicks Steve and Ace. She lives in California and is retired after a successful career in the golf industry.

Do Guns and RVs Mix?

The title may seem like a silly question, but I’ve rarely seen a topic generate so much interest and acrimony as guns. Love them or hate them, everyone has an opinion of them. Eight days [read more]