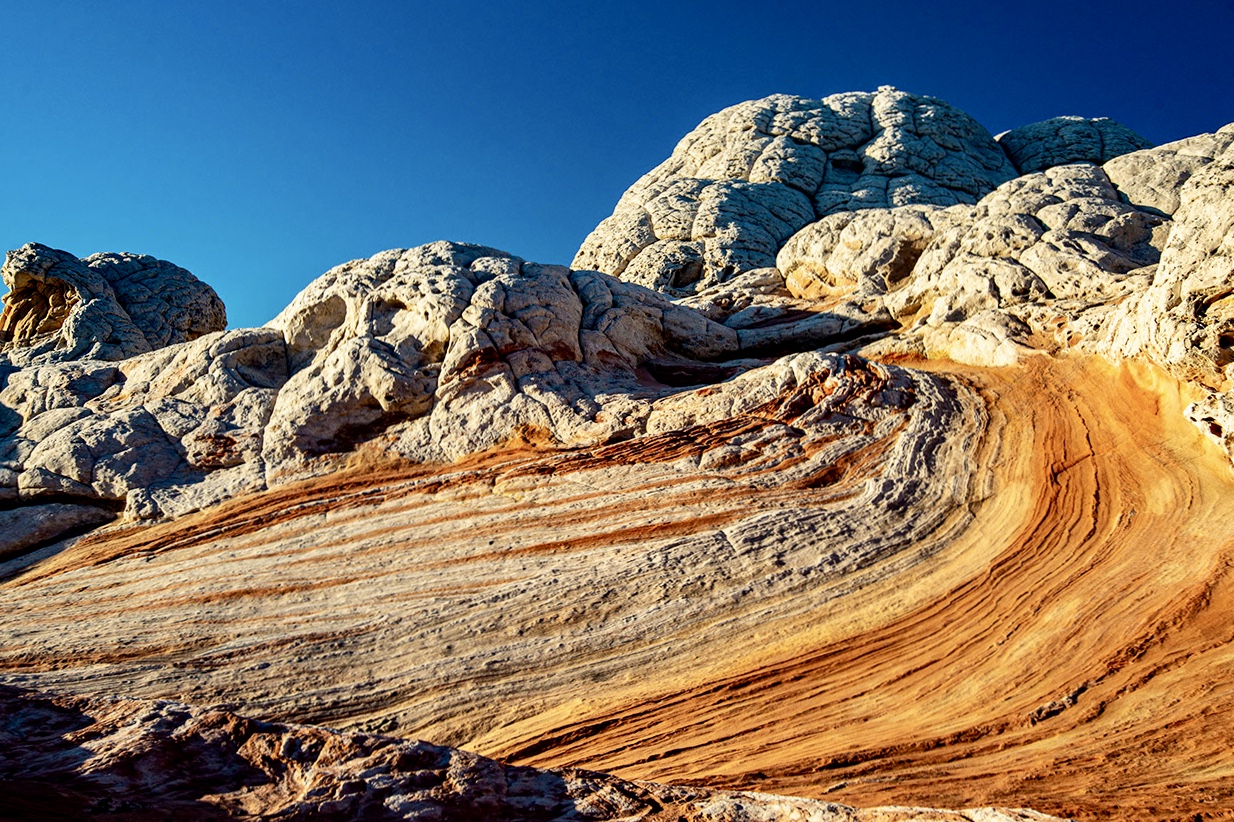 Arizona’s White Pocket has long been on our list of places to visit due to its remote location and unique geological formations. It is a photographer’s mecca, and until the last two years, a relatively unknown one. It’s one of the few remaining “secret” places in the American West, but no longer.

The White Pocket is located on the north side of the Paria Plateau, part of the Vermilion Cliffs National Monument, which is located in northern Arizona. The Plateau is part of the U.S. National Park system, but is administered by the Bureau of Land Management (BLM), which means the rules are a little bit different. For one thing, there are no entrance stations, entry fees, or campgrounds, which is always a plus in our book. Boondocking in previously-established campsites is allowed, although gathering native vegetation for campfires is prohibited. 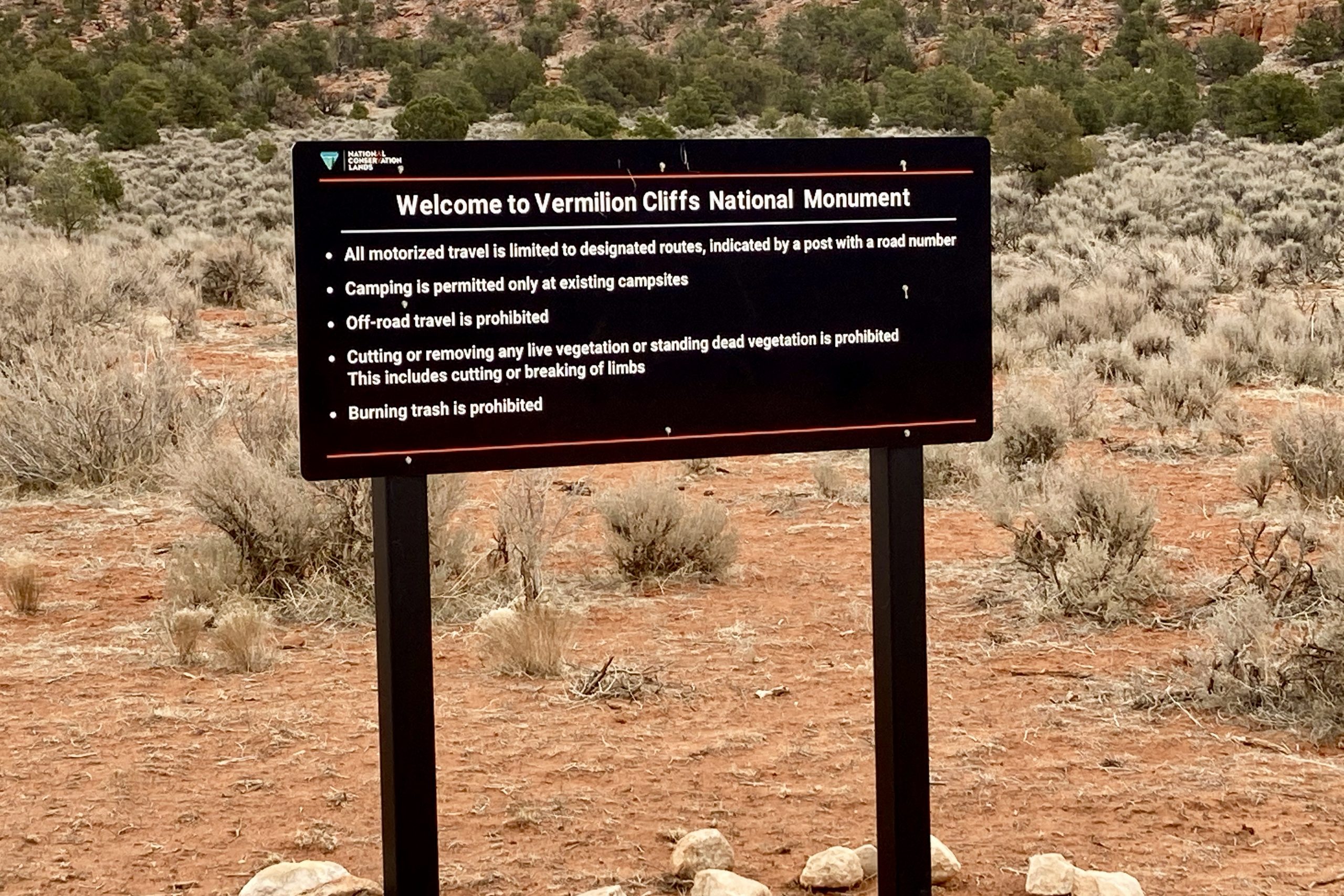 Getting to the White Pocket can be a bit of challenge if you are not prepared. There are two avenues of approach utilizing House Rock Road, which runs north-south on the western edge of the Monument. We came in from the south, off US 89A after topping off our diesel at Cliff Dwellers Lodge (the large modern Chevron station at Marble Canyon has only gasoline). House Rock Road is a graded dirt road with the usual amount of washboarding. Ten miles later, we turned onto Pine Tree Road (BLM 1017) and headed east up on to the Plateau. This road shows signs of being graded on an occasional basis and was in good shape. That ended 6 miles later at the old ranch buildings at Pine Tree Pockets, where we paused to air down our tires. For our Ram 3500-Lance 650 truck camper rig, we settled on 40 psi all around, which worked well for the sandy road to the White Pocket. 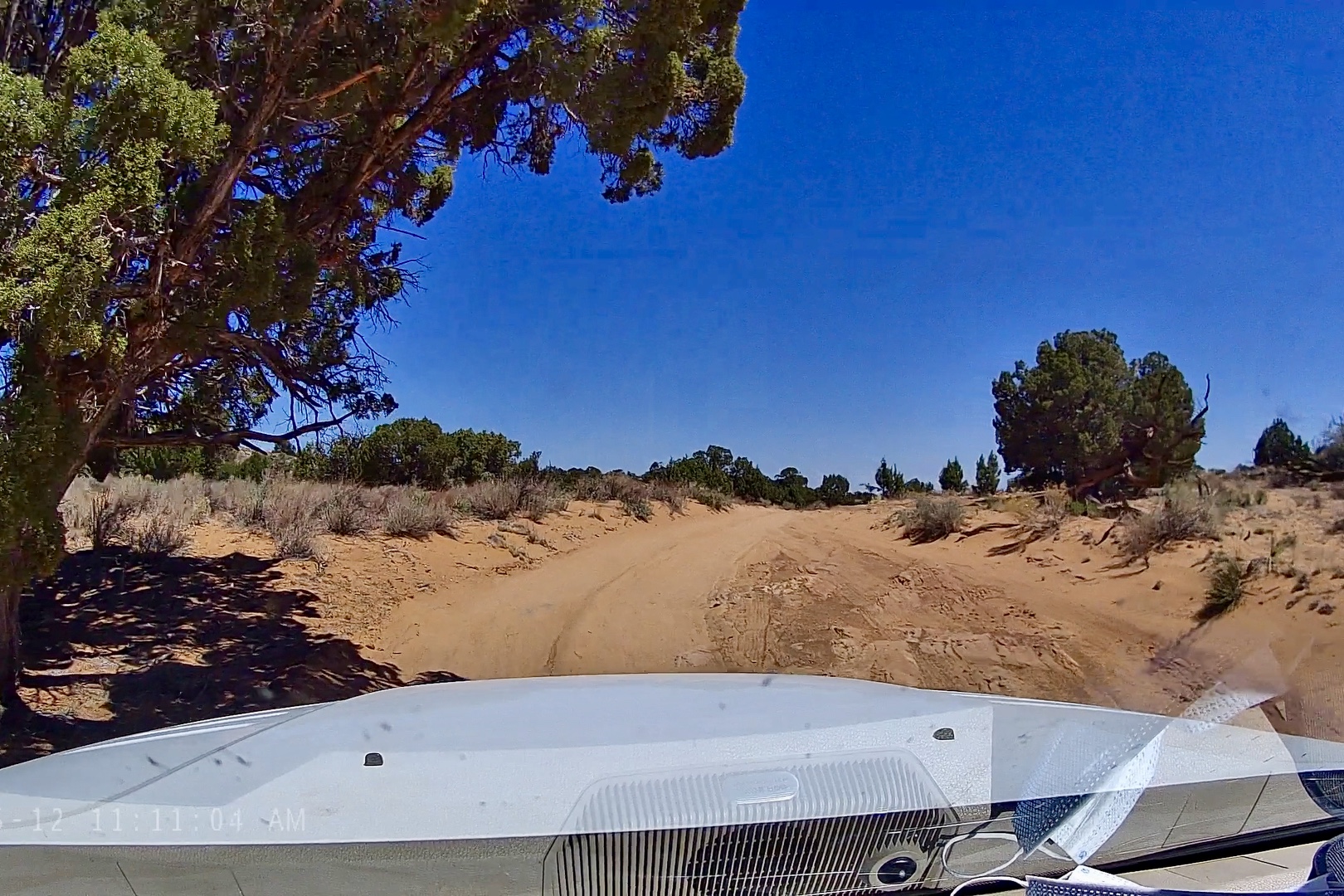 The final 9 miles on Pine Tree Road was almost entirely sand, punctuated by rocky ledges. Slow and careful is the ticket here. You also needed to mind the juniper and cedar trees, which occasionally crowded the road and cheerfully added to the pinstripe collection on our truck camper’s windows. Surprisingly, the road had a couple of narrow spots, which might pose some problems for larger rigs. What probably helped some was that the plateau received some rain less than two weeks prior, which tends to settle the sand. Information posted online implies that as the summer wears on, the high volume of traffic leads to looser and deeper sand. Still, we made good progress.

The last 2 miles of the drive featured stretches of pretty deep sand, but we had no problems with this, although there was evidence of folks who struggled in places. We’re guessing this was a failure to air down. There were also bits and pieces of automobile trim and tires scattered along the way. The last half-mile was the toughest going in terms of sand and the cattle guard at the entrance to the parking/camping area had deep holes on both sides where vehicles had been spinning tires and digging in.

There is a large parking/camping area at White Pocket. There are no facilities of any kind, just an information kiosk describing the area. There is a well-defined path from the parking lot to the rocky area of White Pocket, about 225 yards or so of sand. Once you get there, make sure you’ve got the time to do some exploring and whatever you do, don’t forget your camera. The White Pocket is truly unique. The area comprising White Pocket is about a half-mile long and not quite 2/10s of a mile wide. Be prepared for some light climbing to reach some interesting places and bring water. There are no trees to speak of, so shade is non-existent.

We stayed for two days and nights, departing on the morning of the third day. We saw perhaps 30 vehicles a day visiting the area, with about 10 or so staying the night. This has become a popular destination for tourists and the guide services, mostly out of Kanab, and are staying busy. As an indication of how popular this place has become, more than one guide told us that two years ago, they might have brought a Suburban full of adventure-seekers out once a month. Now because of social media sources like Instagram, they are making one and sometimes two trips a day! The consensus is that the BLM will institute a permit system for White Pocket much like they have had to do for The Wave, which is located not far to the west. While White Pocket covers a larger area than The Wave and can accommodate more visitors, the impact on the local environment will inevitably begin to mount. For example, there are no pit toilets. Figure at least 50 people a day, sometimes more, and some tours spend the night camped in tents. 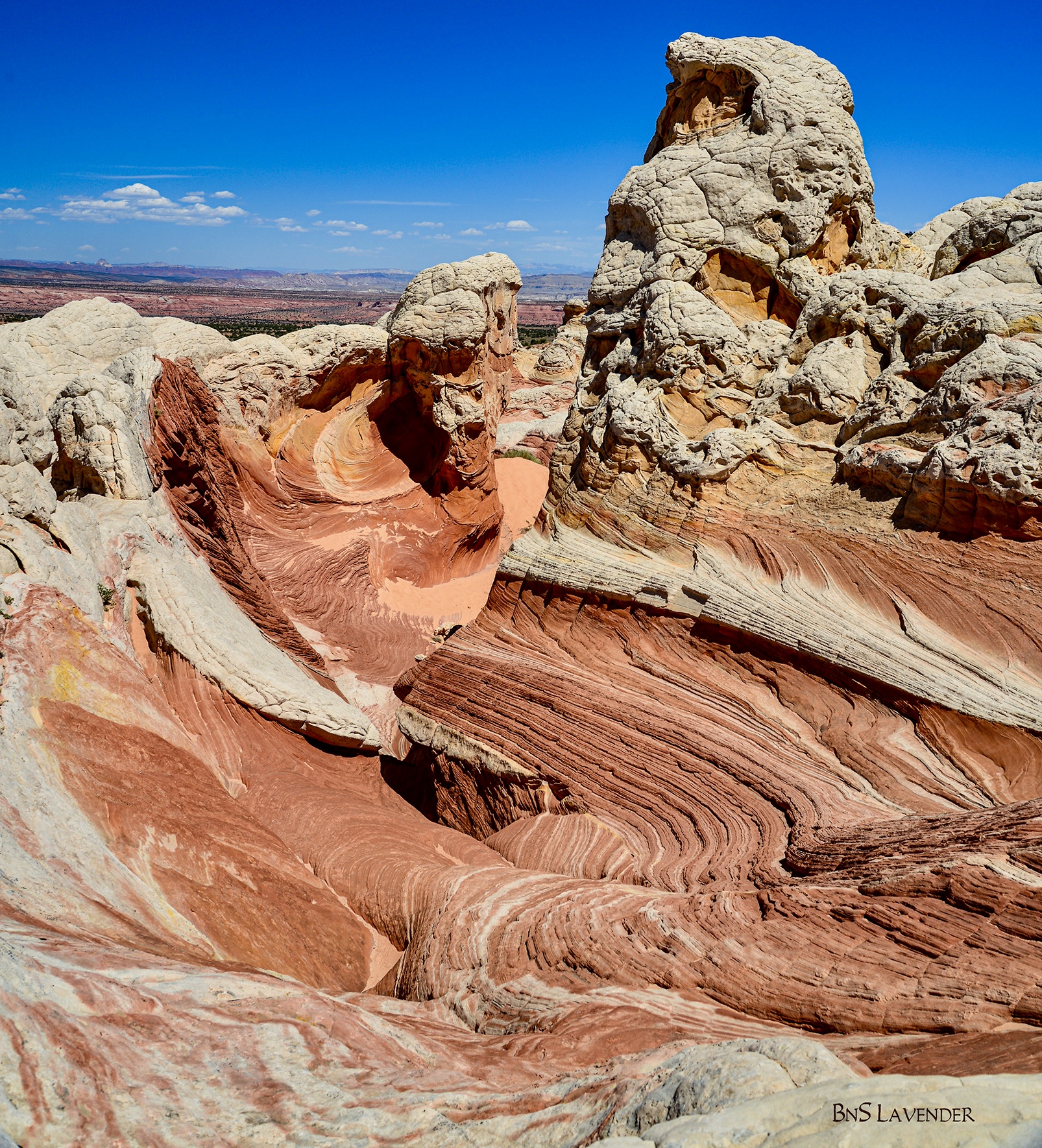 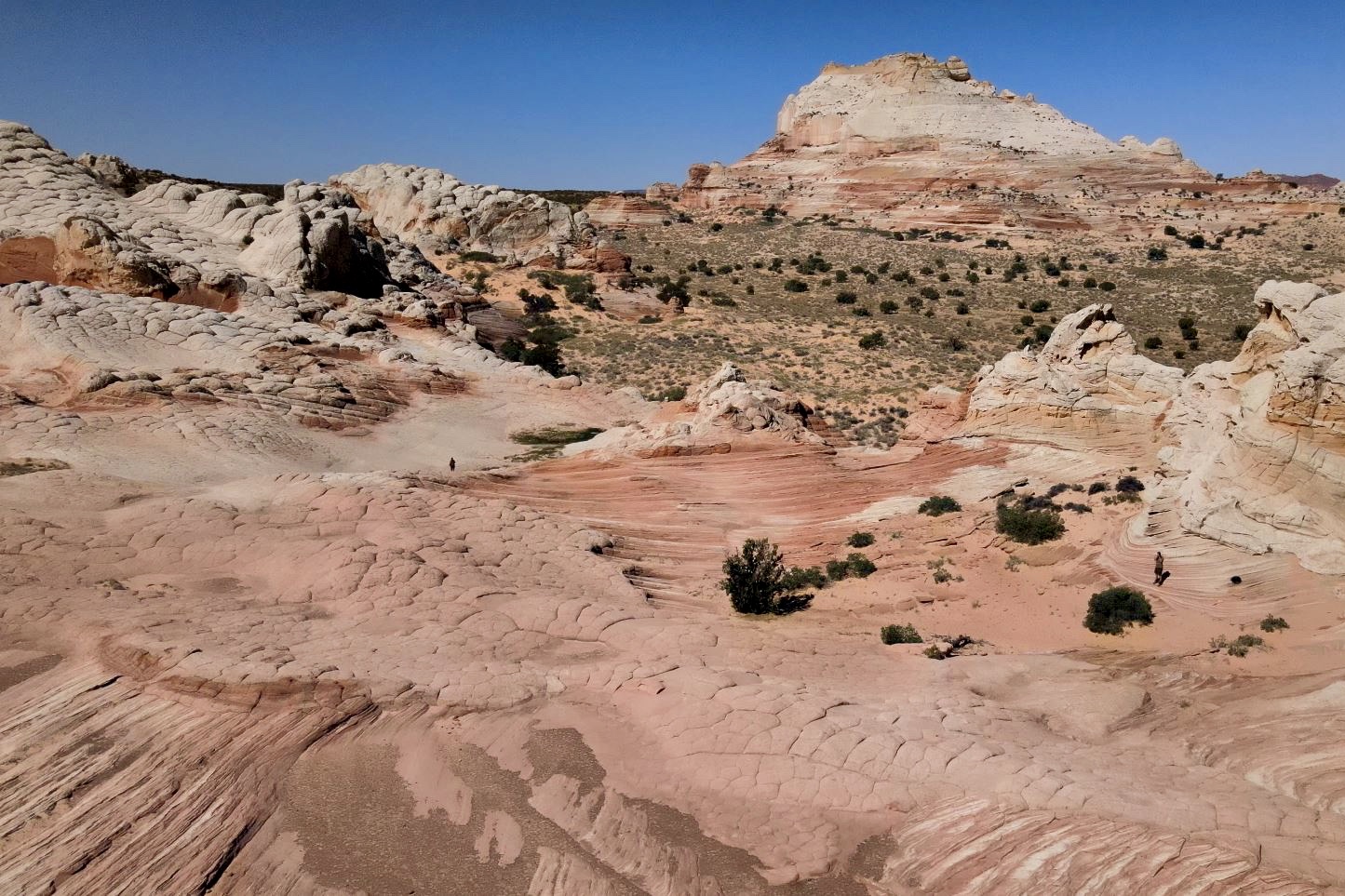 We will give a tip of the hat to the guide services in that we saw very little in the way of litter—far less than you would expect from that many tourists. But if visitation continues to increase, that may change. If you’re considering a visit, we’d recommend sooner than later.

In all, a great trip to a remote gem in the high desert. We definitely plan to go back in our truck camper rig.

About Bryan and Susan Lavender 1 Article
Bryan and Susan Lavender met while working as volunteers in wilderness search and rescue. Following retirement, they traveled the western US for more than 10 years as full-time RVers before settling down in southern Arizona and trading in their Class A RV for a truck camper. Since then, they have enjoyed the ability offered by their truck camper to get far off the beaten path in pursuit of their interests in exploring backcountry areas, photography, and videography.

Truck Camper Adventure held its very first rally in Quartzsite, Arizona, on February 7-9, 2020. A total of 98 people from 21 states, the Netherlands, and Canada attended the big, three-day event, which consisted of [read more]

Southeastern Utah’s Valley of the Gods is a great place to boondock. It’s one of my all-time favorite places to relax with the truck camper and take photographs. It’s very accessible for small RVs, like [read more]

The Marines I worked with back in the day had a saying that I will never forget: Sempre Gumby, which translated means Always Flexible. After our special group permit on the El Camino Del Diablo [read more]