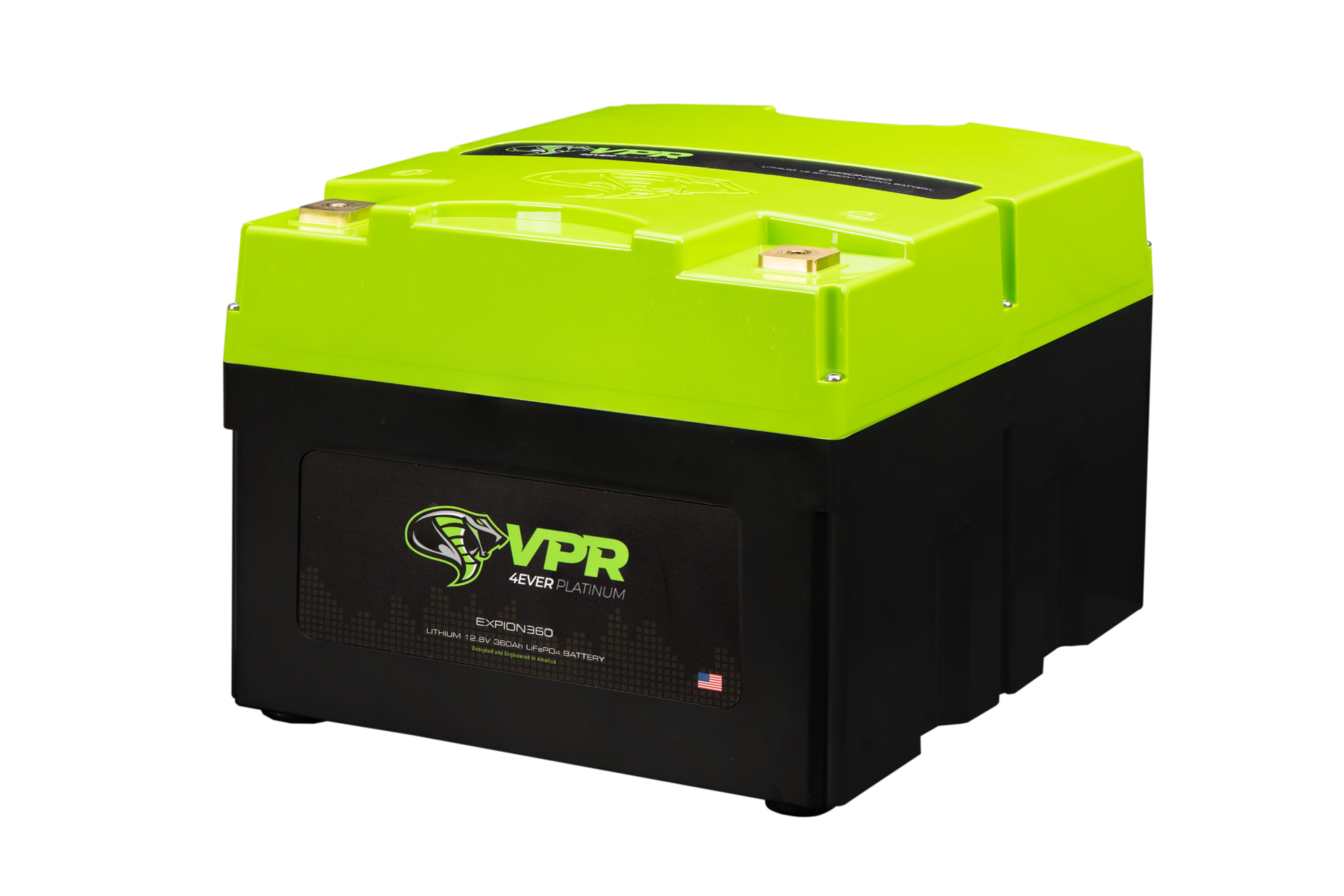 Expion360, a leading manufacturer of lithium batteries for boats and RVs, just released a new line of lithium iron phosphate batteries (LiFePO4) called the VPR 4Ever. According to the company’s press release, the new batteries offer a six-fold increase in lifetime use and six times the discharge power, yet are 65 percent lighter than standard lead-acid batteries.

Of these, Expion’s new signature 360 amp hour LiFePO4 battery is sure to be a game changer. Called the VPR 4Ever Platinum 360, it boasts an impressive 360 amp hours and features the smallest battery footprint available on the market. The battery measures only 13.0 x 14.8 x 10.4 inches and weighs a mere 95 pounds. This is the battery that is now being used in the Truck Camper Adventure Rig. Look for details and photos on this amazing installation soon.

Why go with Expion360 lithium batteries in your boat or RV? Because lithium offers many advantages over archaic lead-acid batteries, including a 100 percent usable capacity (vice 50 percent for lead-acid), a lower price cycle over time, extreme battery life, better hot and cold weather performance, a substantially improved power to weight ratio (most VPR 4Ever batteries are 65 percent lighter), and a smaller ecological footprint. They also charge faster because they can be bulk charged to a full charge state. 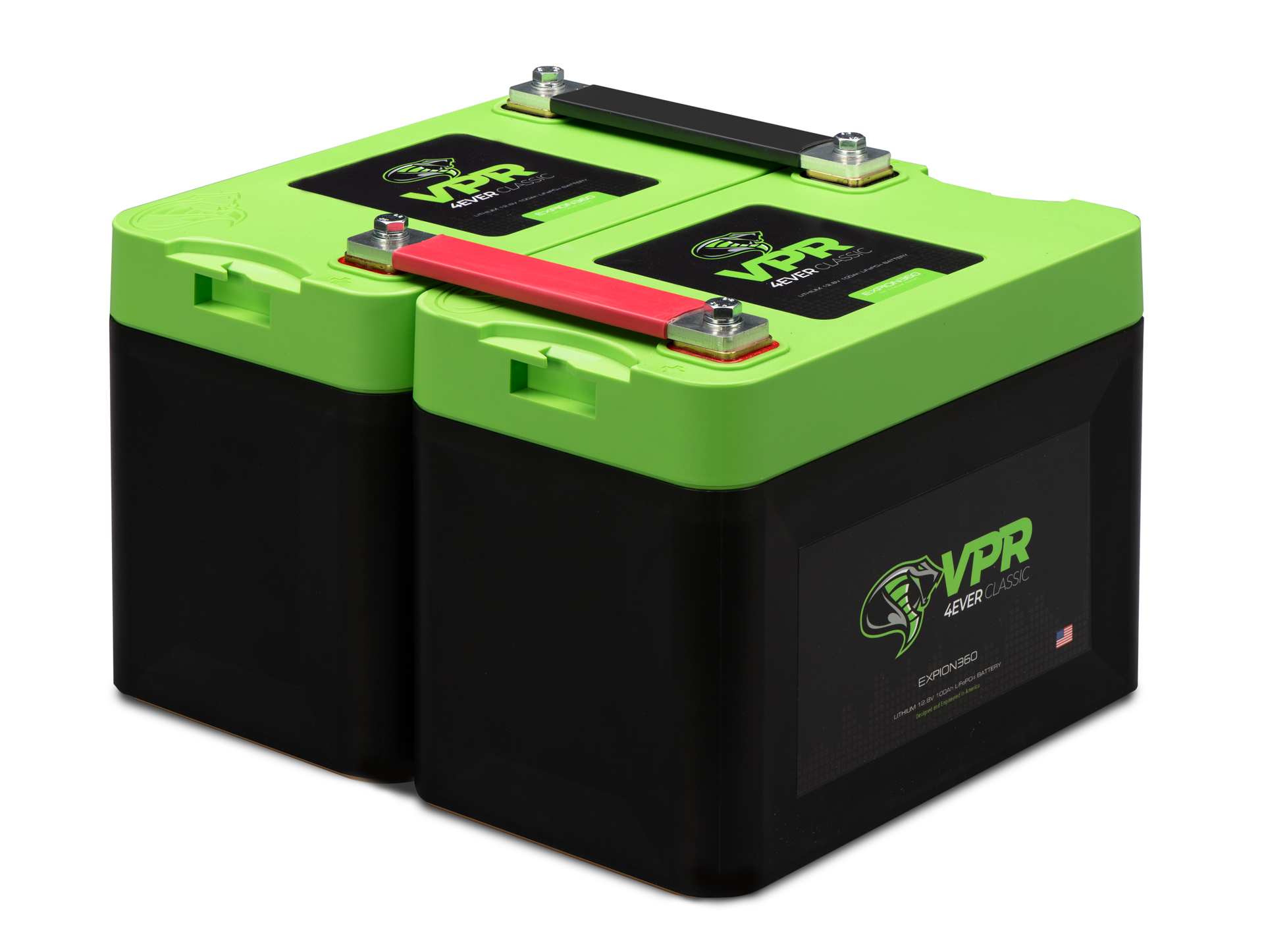 The box design in every Expion360 VPR 4Ever battery incorporates a number of new features. The X, Y and Z axis within the box space are structurally secured with molded ribs rather than foam filler that is found in most of competitors. Expion uses only the highest-grade ABS plastics and infuse 10 percent glass fill into the military-grade battery case that meet UL-94 VO for fire retardant rating. Expion’s battery box is also the first in the industry to feature rubber feet. This feature greatly reduces vibration and sliding issues found in typical mobile installations. Radiused corners heighten the appearance and strengthen the edges for a sleek and sophisticated profile. Each box also features “polarity pads,” which are 96.7 percent larger than standard polarity terminals. This forward-thinking approach to battery design increases the strength and structural integrity by allowing better heat dissipation and a 19 percent increase in current carrying capacity. 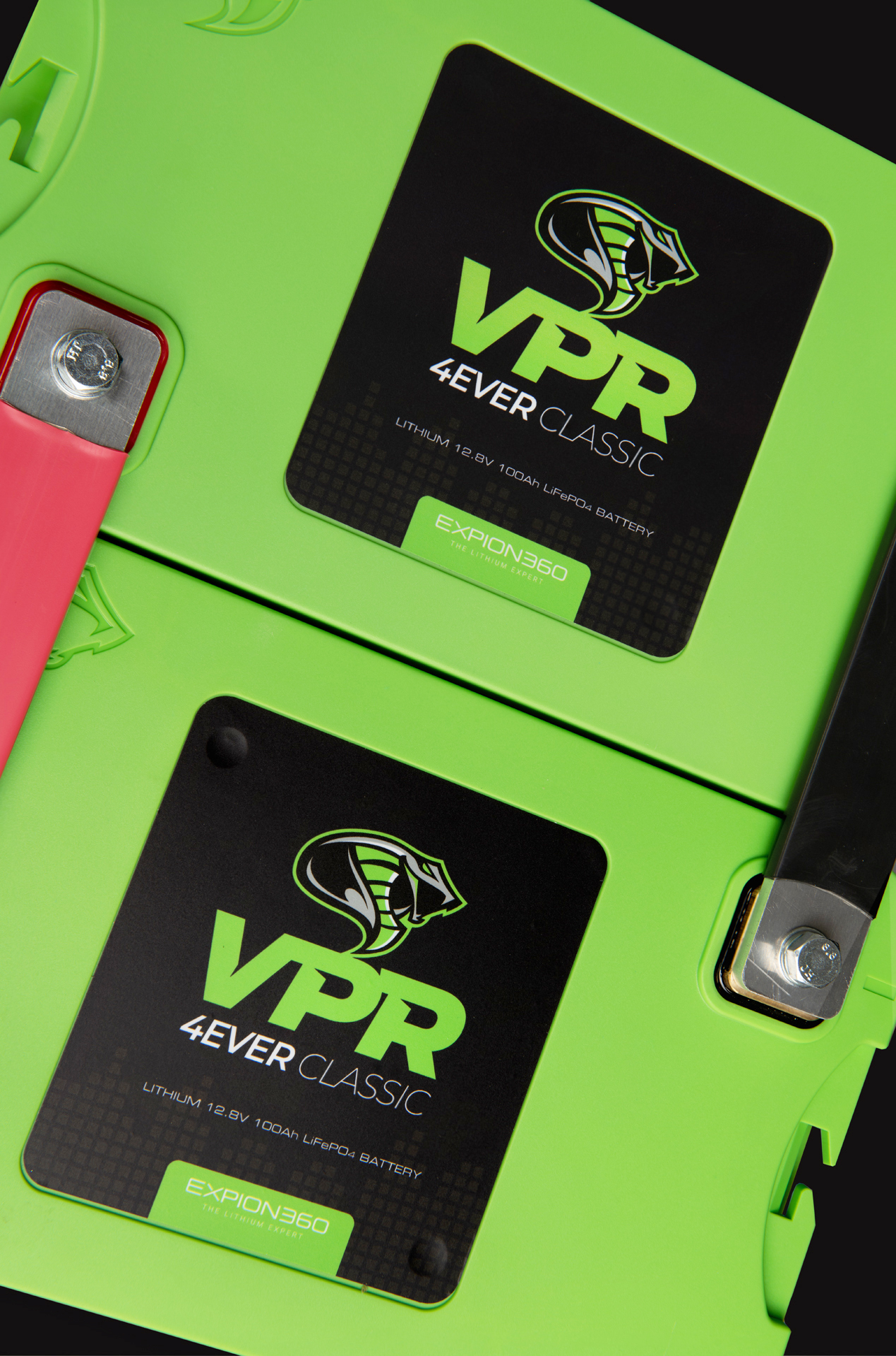 Better yet, all batteries in Expion360’s new VPR 4Ever lineup feature an improved “smart” Battery Monitoring System (BMS). For the cold weather enthusiast, the BMS features a low-temp discharge and charge auto-shutoff to prevent damage in freezing temperatures. The temperature shutoff controls are controlled internally through a microprocessor in the BMS, which receives data through a temperature probe in the battery pack. Low and high voltage cutouts, short circuit protection, and overcurrent disconnect are also managed by Expion360’s BMS. While other makes may overlook the safety importance of structurally securing the BMS board, Expion360’s process incorporates a bolted design that creates one cohesive pack. The addition of terminal connections and an oversized heatsink increase, the reliability of the Expion’s BMS will give years of trouble-free performance.

Expion360 is also pleased to announce that all battery cells used in the VPR 4Ever lineup are UL certified, meaning that they have been independently tested and meet the highest standards for safety and performance.

To support the release of this exciting new lineup of affordable lithium batteries, Expion360 will soon be offering proprietary battery tie-down systems for its VPR 4Ever group-24 and group-27 batteries. Cold temperature heating packages will soon be offered as well.

Host Industries recently announced big upgrades to its three lithium off-grid battery systems, the largest of which offers a whopping 1,080 amp hours total capacity. According to the Oregon-based company, these off-grid systems are powerful [read more]

Innovation is the lifeblood of any industry. Yet, from the 1980s to 2004, the truck camper industry was anything but, with the same floor plans, construction methods, and appliances offered in nearly every model. If [read more]