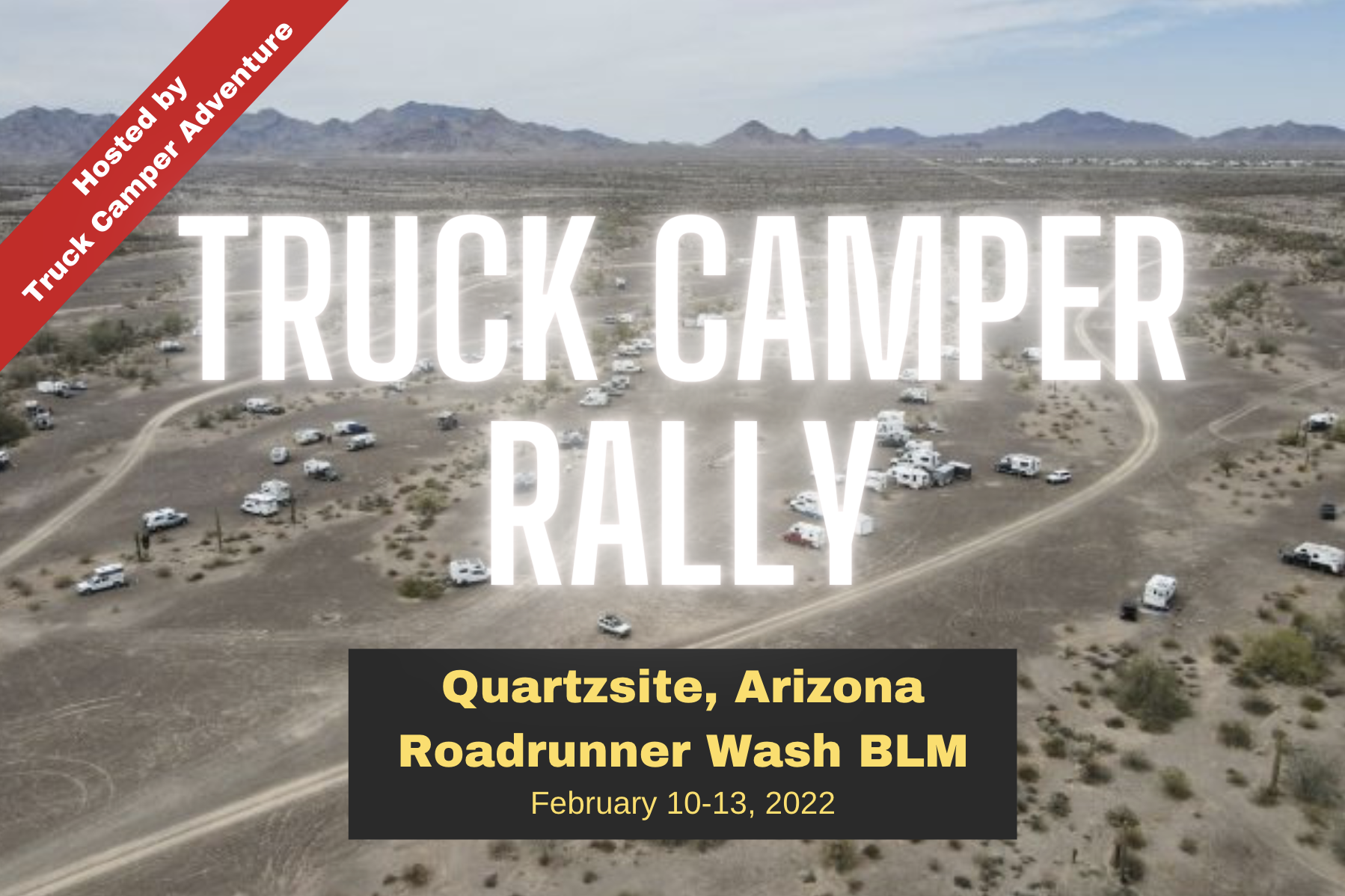 Enrollment in the 2022 Truck Camper Adventure Boondocking in the Desert Rally is now open. The rally will be held in Quartzsite, Arizona, February 10-13, 2022. Enrollment will close approximately February 1. Like previous Boondocking in the Desert Rallies hosted by Truck Camper Adventure, this outdoor camping event will be held at the Roadrunner Wash Bureau of Land Management (BLM) Area 6 miles south of Quartzsite (see maps below). The owners of both slide-in and chassis-mounted campers are welcome and only truck camper owners may participate in the rally—sorry, no other types of RVs will be allowed.

Important! Due to the risks associated with contracting the COVID-19 virus, all attendees will need to sign a form releasing Truck Camper Adventure of any liabilities associated with contracting the virus or from any injuries that may occur during the rally. This form will need to be signed upon check-in before receiving your badge. The wearing of masks in classes numbering more than 50 people will be encouraged. Please bring your own masks. Please do not attend if you are sick. Unfortunately, due to COVID-19 transmission concerns, no potluck or desert gatherings will be held this year. This means you’ll need to bring your own food, drinks, paper plates, utensils, napkins, and cups. No garbage service will be provided—pack it in, pack it out.

Like previous rallies, no admission will be charged to attend the 2022 Truck Camper Adventure Rally. Instead, a voluntary, donation-only raffle will be held Saturday, February 12 to support the event. Prizes for the raffle will be provided by sponsors of the rally, which will be announced later. Previous sponsors included Expion360, Torklift International, WeBoost, Truck Systems Technology, StableCamper, SuperSprings, Omnia, Froli Modular Sleep System, Scrubba, SmithCreek Mill, GoTreads, and others. The total value of previous raffles totaled well over $6,000. Contact us if you’re interested in sponsoring the 2022 event. In addition to the raffle, a “best rig” award will be given for the “best” truck camper rig at the rally.

As the Boondocking in the Desert name implies, this will be a boondocking rally held on BLM land in Quartzsite. No hookups or other amenities will be available, so empty your black and grey water holding tanks beforehand, bring plenty of food, water, and firewood plus a few camping chairs for classes and gatherings. Since this is a boondocking rally, and everyone will be parked close together, attendees are encouraged to use solar power. However, if you need to run a generator or run your truck’s alternator, you may park in the generator designated parking area that will be created for the rally.

Quartzsite, Arizona is the perfect place to hold a truck camper rally. Known as the boondocking capital of the world, Quartzsite has almost everything you need to make your stay enjoyable, including RV repair and supply shops, solar and battery vendors, gas stations with diesel and propane, potable water, dump stations, grocery stores, and restaurants. Cell reception is generally good, but may be a bit slow at times due to the number of people in Quartzsite this time of year.

The weather in February should just about be perfect. Expect temperatures in upper 60s/low 70s during the day and in the 40s during the night. The elevation of the Roadrunner Wash is 1,065 feet. Prepare for strong winds and possibly rain. Bring appropriate clothes and sun screen for sunny days and cool nights. For additional information on Quartzsite, click here. 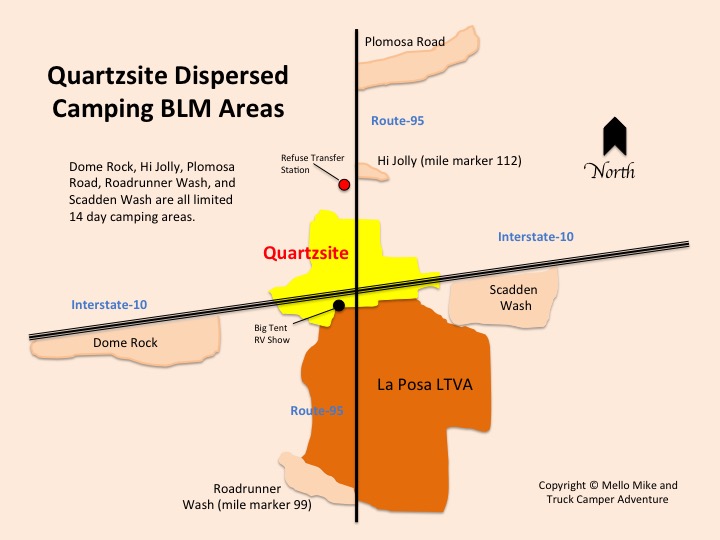 Directions to the BLM Roadrunner Wash: Take the I-10 to Quartzsite. Get off on the Highway 95 exit and head south on Highway 95. Travel approximately 6 miles and turn right (west) on 53rd Street N. (do not enter the BLM area using the Highway 95 entrance due to the presence of deep sand on the main road). The Roadrunner Wash BLM area will immediately be on your right. Look for the orange traffic cones to the left (west) of the Roadrunner Wash Kiosk (the next dirt road over). Follow the orange traffic cones to get to the rally. The location where we will be holding the rally is 33.5911 Lat -114.2342 Long, the same location as previous rallies. Camping is limited to 14 days for those interested in camping before or after the rally.

A TCA sponsored off-road truck camper caravan will not be held in conjunction with the rally this year.

To enroll in the rally, send us an email at [email protected]. State the first and last names of those who will be attending, including children and teenagers, the state where you’re from, and the camper make and model you own. Signing-up is important as it allows us to make the name badges, print stickers, and have the required number of forms on-hand. Check the list below to confirm that your request has been received and processed. Important: If you are unable to attend or wish to cancel, please let us know so we can delete your name off of the list. No shows who fail to notify us will be noted and will not be admitted to future rallies.

About Mello Mike 621 Articles
Mello Mike is an Arizona native, author, and the founder of Truck Camper Adventure. He's been RV'ing since 2002, is a certified RVIA Level 1 RV Technician, and has restored several Airstream travel trailers. A communications expert, he retired from the U.S. Navy in 2004 as a CWO3 after 24 years, worked in project management, and now runs Truck Camper Adventure full-time. He also does some RV consulting, repairs, and inspections on the side. He currently rolls in a 2013 Ram 3500 with a 2021 Bundutec Roadrunner truck camper mounted on top.
Website Instagram YouTube

The Overland Expo is the most unique event for DIY adventure travel enthusiasts in the world and one of Truck Camper Adventure’s favorites. While the countless vehicle builds and classes deservedly take center stage, the [read more]