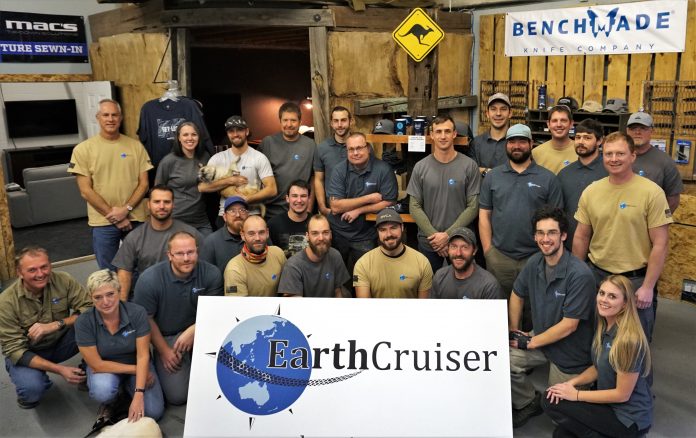 EarthCruiser was founded on April 1, 2008 by Lance Gillies. Growing up in Australia, Lance had an extensive background in off-road driving and building 4×4 vehicles. EarthCruiser was originally designed to meet his specific needs for an overland expedition vehicle that could go anywhere and was comfortable enough for two people to live for extended periods of time. After extensive research and development, the EarthCruiser design was born. The initial successful testing of the prototype EarthCruiser included crossing 700 kilometers of sand dunes leading to the remote Dragon Tree Soak in the Great Sandy Desert in Western Australia. The prototype was then taken overseas for more testing and an arduous yet exciting 27,000 kilometers trip across Russia and Mongolia, which included two crossings of the notorious “Road of Bones”, a swampy tundra track from Yakutsk to Magadan. Recognition of the expedition truck grew and Lance began manufacturing what we know now as EarthCruisers, making them available to buyers across the globe. The company maintained a focus on quality and innovation, primarily operating out of Brisbane, Australia until 2013, when Lance decided to expand the company to the United States. The company now has manufacturing facilities in two countries, and is expanding distribution for customers across the globe.

In celebration of its 10th anniversary, EarthCruiser USA is building four limited edition expedition vehicles, which come fully outfitted with features used in the original EarthCruiser, plus a very special, modern trim package with exclusive badging. Custom seats were developed in partnership with Scheel-mann in Germany, which allows full adjustability and added comfort on long treks. These trucks will include options and accessories as standard equipment, some not available on other models. These limited release vehicles are available only on a first-come, first-served basis.

EarthCruiser also plans to release a new pop-up truck camper—called the MOD—at the Overland Expo West in May. This new camper maintains the ultra-durable, lightweight composite shell, like the GZL, but is available in custom painted colors to match the vehicle. The most important revision is the redesigned interior that offers more option flexibility for customers. Currently, it is being shown as a prototype, with plans to be available for purchase this year.

Another concept scheduled for release in 2018 is a smaller version of the flagship EarthCruiser EXP, which will be designed to fit on the flatbed of a one-ton heavy-duty truck. This concept will have a power lifting roof, interior bathroom with shower, kitchen, and convertible rear dinette that turns into a bed. “We are very excited about this new product,” said Lance Gillies, “as it shows we are listening to customers who have been asking about a version for popular U.S. trucks.”

Oregon-based EarthCruiser Overland Vehicles just announced big changes for its 2020 EXP and FX models, making them even more capable and reliable off-road. According to the press release, a drivetrain consisting of a Vortec 6.0L [read more]