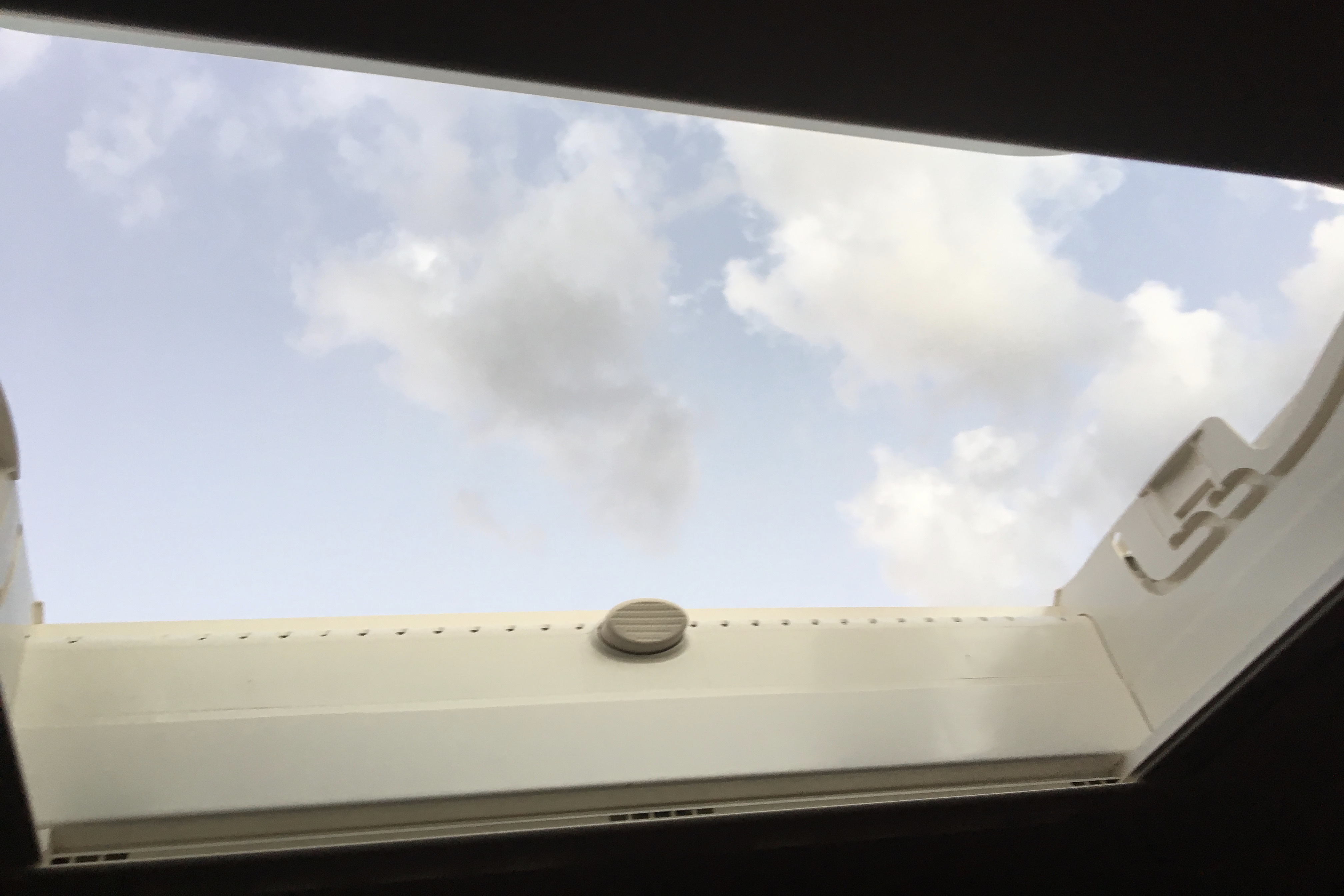 Maintaining proper ventilation in your camper is important. Proper ventilation can not only keep your camper cooler in the summer, but it can also prevent condensation from accumulating inside in winter. Roof vents play a critical role in keeping your RV well ventilated. When we ordered our camper, we had the option of swapping out the standard roof vent in the cabover with a Dometic Midi-Heki Vent. Even though a Heki Vent costs considerably more than a Fan-Tastic Vent, we decided to order a Heki Vent based upon the recommendations from others. Since that time, we’ve come to regret that decision. While the Heki Vent offers several positives, it also comes with a greater number of negatives. That’s the purpose of this review. We’ll discuss the pros and cons of this special vent to help those who are thinking about ordering one make a better, more informed decision. While we’re at it, we’ll also provide a few tips on how to properly maintain, use, and repair it.

First, a little background. The Dometic Midi-Heki Vent is manufactured in Germany by Seitz, a subsidiary of Dometic, and is used in recreational vehicles and caravans worldwide. The most common model of Heki Vent here in the United States is Dometic’s so-called Midi Style B Model 1368. The Midi-Heki Vent is larger than the standard 16×16-inch roof vent and measures 27.5 x 19.6 inches (700mm x 500mm). It has a clear, double acrylic glazed dome on top and separately adjustable darkening and fly screens on bottom. The vent is constructed of a durable, weather-resistant ASA plastic, suitable for use in all types of weather and temperatures. The Midi-Heki comes with a large lift bar with three positions, giving owners control over how much air is permitted inside the camper. This lift bar also integrates with a large, push button release that keeps the vent secure when not in use. While Dometic offers Midi vents with both a crank handle and a 12 volt power fan, the most common Midi offering here in the United States has neither, just the lift bar. North American Truck Camper companies that offer this versatile vent include Lance, Bundutec, Outfitter Manufacturing, Northstar, Northern Lite, Host, and ALP.

As you’d expect, the Dometic Midi-Heki has undergone a few minor changes over the years. Earlier versions featured a clear dome with plastic hinges, which had a tendency to fail in heavy winds. Dometic addressed this problem by making a better dome featuring three, heavy-duty hinges that screw directly into the dome. This effectively addressed the hinge problem, but not others. Thus in early 2018, Dometic made additional changes to the dome that included a heavy-duty opaque frame as well as locking tabs inside the vent that prevent the dome from closing in heavy winds when in use.

So what are the pros of the Dometic Midi-Heki Vent? First, the vent is large and lets in a tremendous amount of air, especially when used with another 12 volt roof fan. The Midi-Heki is also great for stargazing without having to brave the elements. In fact, we’ve seen several shooting stars while laying in the bed of our camper. The vent is also large enough to double as an emergency exit. All truck campers should have an emergency egress in the cabover in case of a fire and the Heki does this very well. In fact, we sometimes use the vent to access the roof to clean our solar panels. Another benefit of the Heki Vent is that its large enough to relieve claustrophobic feelings in the cabover. Fortunately, this phobia isn’t something that we suffer from, but we know one person who does, and this vent helps her a lot. Finally, the vent lets in a tremendous amount of light. For campers with excessively dark interiors and few windows, this can go a long way towards making the interior of a camper feel light and airy and less gloomy, especially during overcast days and in winter.

So what are the cons? Perhaps, the biggest is that the Heki Vent lets in too much heat. Sure these high temperatures can be alleviated by opening the vent, but this isn’t an option on the road or when the camper is in storage. Moreover, this heat can cause premature breakage and warping of the vent (more about this major problem later). The Heki is also more complex than your standard, everyday 16×16-inch roof vent, making even simple repairs more involved. For example, the sliding bug screen and blind mechanisms consists of several strings that can come loose if one or more of the plastic retainer tabs on either of the operating bars breaks. Restringing the vent after repairing one of these tabs can take a lot of research and time. Not only that, as a German import, the Heki Vent is a very expensive item to repair. We recently had to replace a cracked dome in our Heki and it wasn’t cheap. Most repairs will cost hundreds of dollars.

But perhaps the biggest con with this imported vent is that the dome is made of acrylic. This soft plastic can be marred and scratched and is prone to cracking, especially from large hail stones and tree limbs. Moreover, the hinges that keep the dome in place have also been known to fail in heavy winds and at highway speeds. In fact, its been our experience that the acrylic used to manufacture these domes isn’t strong enough to stand up to American hail storms (the jury is still out on the 2018 version). When in storage, some kind of cover is needed to protect the vent from hail damage and from overheating. In our opinion, you shouldn’t have to do this for any RV vent, especially for a vent in this price range.

Maintenance and cleaning of the Dometic Midi-Heki Vent is fairly easy. According to Rory Willet, owner of Bundutec, only a non-abrasive liquid cleaner and a very soft towel should be used to clean and dry the acrylic dome. Never use aggressive cleaning agents such as glass cleaners, all-purpose cleaners, abrasives or washing-up liquid. Alcohol-containing cleaning agents should also be avoided. Dometic sells an excellent cleaning and polishing kit, but since it’s imported from Europe, it’s pretty expensive. A much better and cheaper alternative here in the United States is to use Meguiar’s M17 Plastic Cleaner and Meguiar’s M10 Clear Plastic Polish. These work perfectly on Dometic’s acrylic vents and windows, can be purchased in any auto parts store, and cost about $6 to $8 a bottle. We also recommend using new microfiber cloths when cleaning and drying the dome. These cloths are non-abrasive and work well in removing dirt and residue from the surface of the dome. When cleaning the vent, only an up and down or side-to-side motion should be used, never a circle as it can create a swirl look in the acrylic if the rag happens to get dirt on it.

Here’s an important operating tip. NEVER completely close the Heki Vent’s privacy shade (Dometic recommends closing the shade no more than 2/3s). Doing so can melt the plastic inside the vent like a sun-powered oven! “I found this out the hard way,” Rory Willet said. “And, they do not cover that mistake with any warranty. Like most people, I thought it would be a good idea to keep the sun out when I stored my camper. Less interior sun fade and keep it cooler. One extremely hot summer week had the entire inside frame and roller track melted to the point of not being functional. Now, I leave both the screen and shade open. I have heard of customers placing an exterior cover over the dome lid when stored to help with the heat build up, but I have never done it myself.”

If you need replacement parts for your Midi-Heki, we recommend ordering them from your RV manufacturer rather than going through Dometic. We ordered our parts through Northstar Campers. It’s far more cheaper and easier that way. As far as costs are concerned, you’re better off ordering a complete vent rather than ordering a large component. For example, a replacement dome from Dometic costs $652, while a complete bug screen-privacy shade assembly with tension strings costs a whopping $368. You can get the entire Heki Vent from your manufacturer for about $700. Expensive? Sure, but you’ll have every replacement part you’ll probably ever need for a lower price than what you can get from Dometic. However, if a smaller, $50 replacement part is all you need, then going through Dometic makes more sense. Before you order a part from Dometic, however, you’ll need to know the model number of your Heki Vent and the part number. For your convenience, we’ve provided Dometic’s official parts list here.

As you can probably tell, we have a love-hate relationship with the Dometic Midi-Heki Vent. If we had a do-over with this camper, we probably would pass on it. We’ve simply had too many problems and expenses with ours to make it worth it. First, it was the broken retainer tab and unraveling of the vent’s string mechanism, which created a big, tangled mess, then it was the hail storm, which left a big crack in our dome. Both fixes were expensive and took a lot of time to address. On the other hand, many people love their Heki Vents and have never had a problem with them. In fact, some say its the best vent in the world. We would agree if the vent was made of a more durable, heat-resistant material like aluminum, something that Dometic should take a hard look at doing.

So what’s the bottom line? Is the Dometic Midi-Heki Vent worth having? Is it worth the cost? It really comes down to what’s important to you. If you want a maintenance-free vent that you’ll never have to worry about, then DON’T get this vent. However, if you’re looking for a pretty cool RV vent that offers terrific views and greater amounts of fresh air for your camper, then this vent will serve you well, but only if you give it the care and attention it needs. What would we rate the Midi-Heki Vent? On a scale of 1 to 5 with 1 being the lowest and 5 being the highest, we give the Dometic Midi-Heki Vent a rating of 3 stars.

Lance Camper Manufacturing Corp. recently announced more than 50 standard and optional feature enhancements to its segment leading truck camper products. “Thanks to outstanding product and the dealers to represent and support them, our truck [read more]