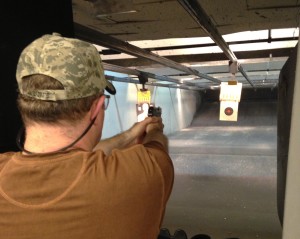 The title may seem like a silly question, but I’ve rarely seen a topic generate so much interest and acrimony as guns. Love them or hate them, everyone has an opinion of them. Eight days ago I started a poll which asked RV owners if they carried a gun in their RV and posted a link to the poll on the RV.NET Open Roads Forum. In that short time the poll had received 324 responses, an unprecedented number on this site. Of those who responded 64 percent said that they packed at least one gun in their RV, while 33 percent said that they did not. Not surprising, 3 percent declined to answer, preferring instead anonymity on the topic.

In addition to the raw numbers outlined above, the poll also generated interesting results behind the scenes. Of the 591 readers who clicked on the link to the poll, only 324 actually responded. Some of these, no doubt, were readers checking back to get an update on the polling numbers, but some were readers who preferred not to answer in the fear that “big brother” was watching, several actually took the time to tell me so. There is a contingent of gun owners who fear that the government is monitoring the Internet and are loathe to provide any information on gun ownership and use. I respect that desire for privacy, which is one reason why I gave this poll a response with this answer.

So getting back to the question of whether guns and RVs mix? Yes, absolutely! An RV is no different than a home or car, and in these troubling times when law enforcement can’t be everywhere at once, a gun can be a good deterrent to trouble. Fortunately, in the United States, gun ownership is still legal and a guaranteed right under the Second Amendment of the U.S. Constitution, but gun ownership carries with it a great responsibility for proper storage and use. All gun owners should be properly trained to handle and fire a gun. When transporting a gun across state borders, you’ll want to make sure it’s legal in the state you’re entering.

Does gun ownership guarantee that you’ll be safe? No, but it does give one peace of mind knowing that it’s there in case it’s ever needed. In 2010 a vacationing couple from Oklahoma were tragically and brutally murdered by escaped convicts from an Arizona prison. The couple owned two hand guns, but both were out of reach and stored away in their travel trailer when they were overtaken in their truck at an I-40 New Mexico rest area.

Rest areas are notoriously risky for travelers, but trouble can arise anywhere for vacationing RV owners. One respondent to the poll reported two run-ins with drug cartels while boondocking on public land. This is a documented problem not only on properties maintained by the Bureau of Land Management (BLM) in border areas, but also in some national forests located in warmer climates. All RV’ers are at risk in certain areas, but Female’s are especially vulnerable, especially those who travel alone. Thugs aren’t the only threat to RV’ers, attacks by wild animals are increasingly on the rise, too. Last summer black bears mauled tent campers at two Arizona campgrounds which forced their closure for the entire summer. Moose, wolf, and cougar attacks are a threat in certain parts of the country as well, especially in northern climates.

What type of firearm would I recommend for your RV? At the very least I would pack a pistol–the size of this small firearm makes it ideal for the tight spaces found in most RVs. Most gun owners prefer middle size calibers like a .38 caliber or 9 mm, these have enough power to stop most attacks and have a moderate recoil that can be handled by most. But if you don’t feel comfortable packing a medium or a large caliber handgun, a .22LR pistol can be quite a deterrent to trouble and contrary to some so-called “experts,” a .22LR can be quite deadly at short range from a pistol or long range from a rifle. However, if you like to camp in areas where bear and moose are prevalent, then I wouldn’t carry anything smaller than a .45 caliber pistol.

When it comes to firearms, I consider them a last resort to trouble and only if I fear for my life. I don’t consider an attempt to steal a Honda generator as a life and death event. No property or material object is worth taking another person’s life. If they want my generator that bad, they can have it. But if you fear for your family’s well-being and decide to draw your weapon, you better be prepared to use it. The thug on the other end may call your bluff and charge you or pull their own weapon on you. This reminds me of another important thing to consider when using a firearm. Make sure you have a clear line of fire in the event you miss your target. Even a .22LR round can easily pierce an RV, not to mention a person.  For an outstanding, very detailed article on guns and RVs, I highly recommend Derek Gore’s piece on the topic, Safety & Security: Guns and RVs.

An adage I live by is to “be prepared in all things.” This applies not only to emergency preparedness but also to self defense. You don’t want to be caught in a situation where you have zero options to defend yourself. However, if you aren’t comfortable carrying a gun, then get another weapon like a taser

. These can only be used at short range, but they are a viable option for those who feel unqualified or ill-at-ease carrying a firearm. Fortunately, U.S. citizens have a choice on what weapon they choose to defend themselves.

Living in a Cirrus 820: The Good, the Bad, and the Unexpected

Truck Camper Adventure is proud to present another interview with a full-timing couple, Lonnie and Guntars Asmanis-Graham. The couple met in New York City about six years ago, where they were both living. At the [read more]

This is the first in a series of “In the spotlight” articles that will profile rigs that most of us admire and that we’d all love to own. In this article, Truck Camper Adventure Magazine [read more]

Walmart is a popular overnight layover for road-weary, RV travelers. Affectionately known as Wallydocking, it’s a great way to rest without having to pay an exorbitant price to stay overnight at an RV park or [read more]