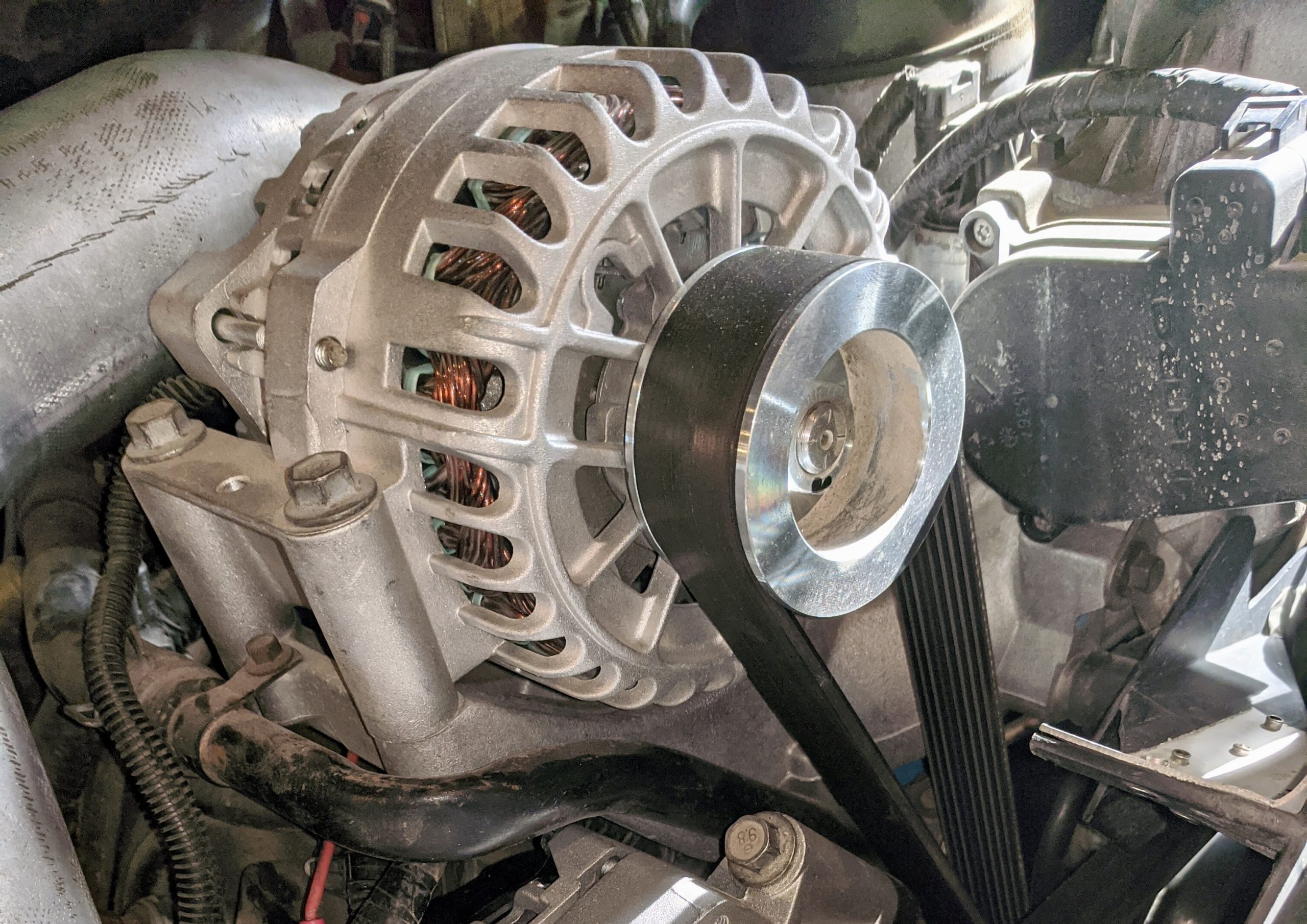 The  generator. It’s big, heavy, noisy, smelly, it annoys neighbors, requires maintenance, and is expensive. Why buy one when there are so many negatives? Because we need more energy than our battery, inverter, or solar capacity can provide. We don’t “want” all of the negatives that go with having a generator, but we accept it because it has historically been the only way to power our high amperage loads. Is there a better alternative? I think so. The ability of lithium batteries to store a lot of energy and charge quickly has re-opened an opportunity that always existed, but seldom worked—the engine alternator. I believe “self-sufficiency” is the direction the serious RV community is going and a strong alternator charging system is key to achieving it.

To be electrically self-sufficient, an RV must have a good balance between storage, generation and conversion to meet all demands. In the last decade, low-cost inverters have solved the conversion problem. Solar has come a long way with increased generation efficiency at lower cost, but still leaves a gap because it’s not always powerful or reliable enough. In the last few years, high-capacity lithium batteries have solved the storage problem and make it possible to operate an air conditioner for the peak heat of the day or longer without a generator. Summer camping in the South is never going to be in reach, but if you keep your objectives modest, have a good solar array, an inverter and lithium batteries, it’s time to rethink the generator.

Running all my systems—including my air conditioner—on solar and a second alternator was planned from the beginning, but it’s clear to me, the average truck camper has unfulfilled potential. Developing the alternator system started with an old Lance 1130 (with a propane 3,500 watt generator, removed after the first trip) and continues with my chassis mounted DIY camper, both on the same F-350. My goals and accomplishments were as follows:

* My Lance’s 3,500 watt generator is almost fully loaded running my battery charger in my 4,000 watt inverter-charger (at 105 amps = about 3,100 watts) ……and my battery can charge at that rate. Most who charge from their generator don’t have “enough charger” to load their generator, causing longer and less efficient operation. The original 120 amp alternator put out around 75 amps (2,200 watts) continuously. The new 220 amp alternator will put out about 110 amps (3,200 watts) continuously at about 29.2 volts charging voltage.

Below is a brief explanation of what I did with a second alternator powering a 24 volt system.  Presuming most of you are running a 12 volt system with a single alternator, I have also included thoughts about that as well as newer vehicles with “smart” alternators. This whole system works because of the high capacity and high charge rates of lithium batteries. Getting a lot of charging in a short drive is possible. Not so with lead-acid batteries. They just charge too slowly.  Let me take you through my system and my design process and see if any of this can work for you.

I have a very large lithium battery (24 volt/17.5kwh or 2,132 amp hours at 12 volts); a 24 volt, 4,000 watt inverter;  and a large 24 volt, 950 watt solar array. They meet my (ab)normal operating needs exceedingly well and for a considerable duration. I’m usually boondocking. My solar usually supplies all I need. There are times it doesn’t such as when I’ve been camping in the shade, in stormy weather or running my air conditioner. Periodically, I need a major recharge by something else. I move frequently so having the capability to recharge on-the-move with an engine alternator is super convenient for me, so I have invested significant effort in optimizing it.

This system can be just as easily implemented on a 12 volt system as my 24 volt system, but at a significantly lower capacity. There are a couple of ways to do it;

Automotive alternators have some mystery surrounding them so some basic understanding is needed for the design:

With all this in mind, I set about designing a 24 volt alternator and control system. My 2004 Ford F-350 has a factory option for a second alternator. I was able to buy a “take-off” kit from a junkyard for the second alternator for $175. I initially used the original 120 amp alternator, but recently installed a 220 amp model. Most of my experience is with the 120 amp unit.

Since I wanted a “24 volt” adjustable alternator, I just disabled and bypassed the internal “12 volt” regulator to bring the rotor positive lead out to an external “24 volt” adjustable regulator. Even if you are staying with a 12 volt system, you will still need to convert to an external regulator if you want to be able to alter the output voltage to work with lithium charging.

I created a control system that includes a monitoring system on my center console, for voltage, amperage and temperature of the alternator; a remote manual voltage/current adjustment; and a safety system that cuts off the 24 volt power that operates the regulator if the battery is full (BMS controlled), the alternator is hot or I don’t want to charge. Note: The Transpo V2400 (24 volt) regulator I use is not available with a remote voltage adjustment. Transpo 911-02R is a 14 to 20 volt regulator with a remote adjustment that sells for around $100.

The alternator is connected to the battery main bus with 2 AWG welding cables (about 140 amp capacity to support a 220 amp alternator). When deciding to charge, I check the battery voltage, and knowing my drive time, manually adjust the output voltage to charge up to the continuous duty rating of the alternator, depending on my drive time and charging goals. I rarely plan to achieve a full charge and usually target 80 to 90 percent SOC. Not fully charging lithium batteries is not harmful. As the battery charges, resistance increases and amperage tapers off, so I periodically tweak the output voltage upward if I want to maintain the charge rate to max of 29.2 volts. This is actually just how the first stage of “bulk/constant current” charging works. With the 120 amp alternator, I could charge at 75 amps continuously. The 220 amp alternator can charge continuously at around 110 amps without exceeding 120C, but I’m still experimenting with that.

If you are only able to have one alternator, the best solution will always be a DC-DC (aka “battery-to-battery”) charger. A normally operating vehicle will draw 20 to 50 amps depending on how much equipment you have operating. A 50 amp charger will add to that, likely driving a standard (100 to 150 amps rated) alternator over the max continuous duty capacity (50 to 75 amps). I would replace a standard capacity alternator with a high capacity one (about 200 to 250 amps….don’t go crazy) and upgrade the gauge of the output cable between the alternator and battery. Even though you will connect your battery charger directly to the alternator output, upgrading the cable when you upsize the charger will prevent melting the lead if some unknown demand happens. Most smart alternators are already rated “high capacity.”

Connect your positive and negative leads of the charger directly to the alternator with an appropriate gauge cable. Attach a ground lead to the back of the alternator case (installation instructions should also direct you to do this). Many alternators have an 8mm tapped hole in the back case for that purpose.

FYI, most smart alternator systems also have current shunts to measure current in-out of the starting battery, located right at the battery negative cable. Don’t connect your DC-DC charger leads to the battery, so that the charger current flows through the shunt. You’ll make the ECU think all that power is going into the starting battery. Remember, you only have one alternator and if you cook it, your vehicle will no longer operate.

There is a similar system in the sailing community that may be superior to my system (does the same thing but more automated). These are called “charging regulator” systems, which are designed to operate on a large, second alternator on a sailboat engine to maximize battery charging. They provide superior battery charging without affecting the engine operating system. Temperature sensors are also available (optionally) to lower (not turn on and off like mine) charge rates to reduce alternator temperatures. Charging regulators are not appropriate for single alternator systems. Cost of these regulators alone is about $350 to $400 for the regulator plus $60 for the temperature sensor. Balmar and Mastervolt are two manufacturers. They also recommend their own high-capacity alternators which cost $1,800 or so, but I suspect it is impossible to find brackets to mount them on an automobile.

If your vehicle can mount a second alternator and you don’t want to pay the “dealer premium,” I would look on eBay for a scrap dealer parting out a wrecked truck similar to yours that has a factory second alternator installed. They may only be advertising the “second alternator,” but I’d bet they can remove and sell you a whole take-off kit if you asked. If you set up the second alternator to not be connected to the vehicle electrical system, but directly to the camper charging system, there should be no warranty issues (a guess).

As an engineer, I’m always tweaking my system to perform better, but am pretty happy with the way it works now. There is more information on my whole power system on my you-tube channel (workingonexploring) or blog at workingonexploring.com. If those don’t answer your questions, you can reach me by commenting on a post/video. As we head into the summer “air conditioning season,” I’ll be testing my 9k BTU mini-split with this system and will be posting the results. 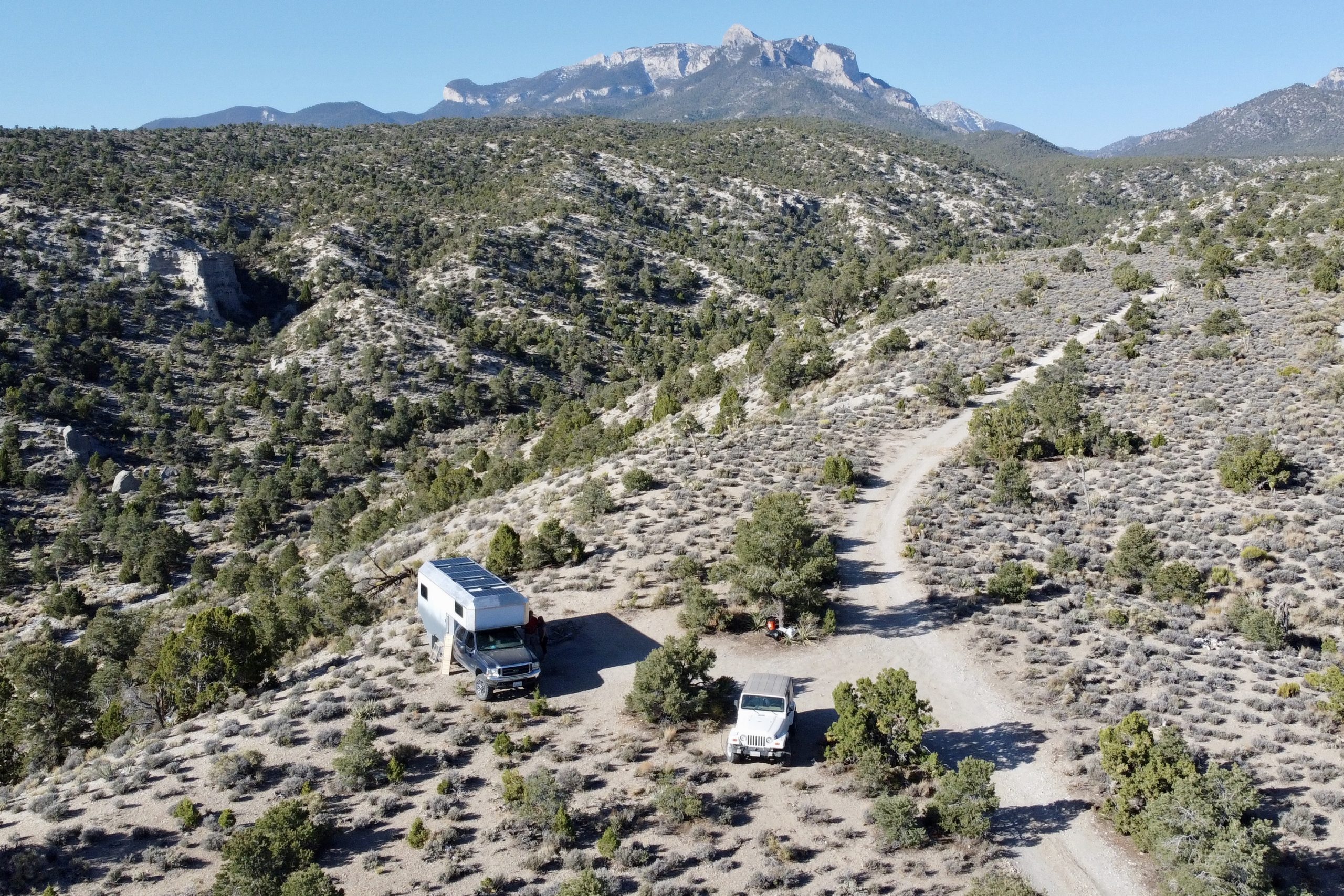 About Steve Hericks 1 Article
Steve holds a mechanical engineering degree from MIT, was a US Army combat engineer officer for nine years, and is now retired from engineering and program management in high-tech manufacturing. He currently works on and travels half-time with his wife, Cheryl, in a custom truck camper they built called Maximus.
Website Instagram YouTube LinkedIn

My, how times change. The idea of using electricity to cook in an RV would have seemed crazy 10 years ago, but not anymore. What changed? Advances in lithium battery technology and the popularity and [read more]

Bargain Alert: Go Solar for only $170 with Renogy!

Are you looking to go solar for a bargain price, but don’t know where to start looking? Well look no further. The good folks at Renogy Solar are offering their 100 watt Solar Power Starter [read more]

Benefits of the Lithium Iron Phosphate Battery For RVs

Every now and then, a technological breakthrough occurs that has a major impact on the RV industry. One that is creating a lot of buzz and excitement within the boondocking community is the lithium Iron [read more]