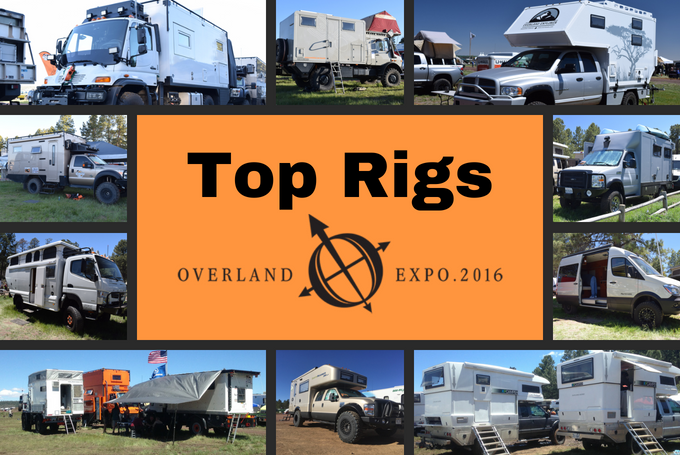 Each May thousands of overland enthusiasts gather near Flagstaff, Arizona for the Overland Expo West. The event, which showcases hundreds of overland vehicles and products as well as an impressive schedule of workshops and classes, is designed to inspire and motivate attendees to explore the world. The 2016 Overland Expo West was a terrific show, one of the best. Last week we took a close look at seven truck campers that impressed us the most. This week we highlight seven of the coolest, baddest, most capable expedition campers we saw during the entire show. 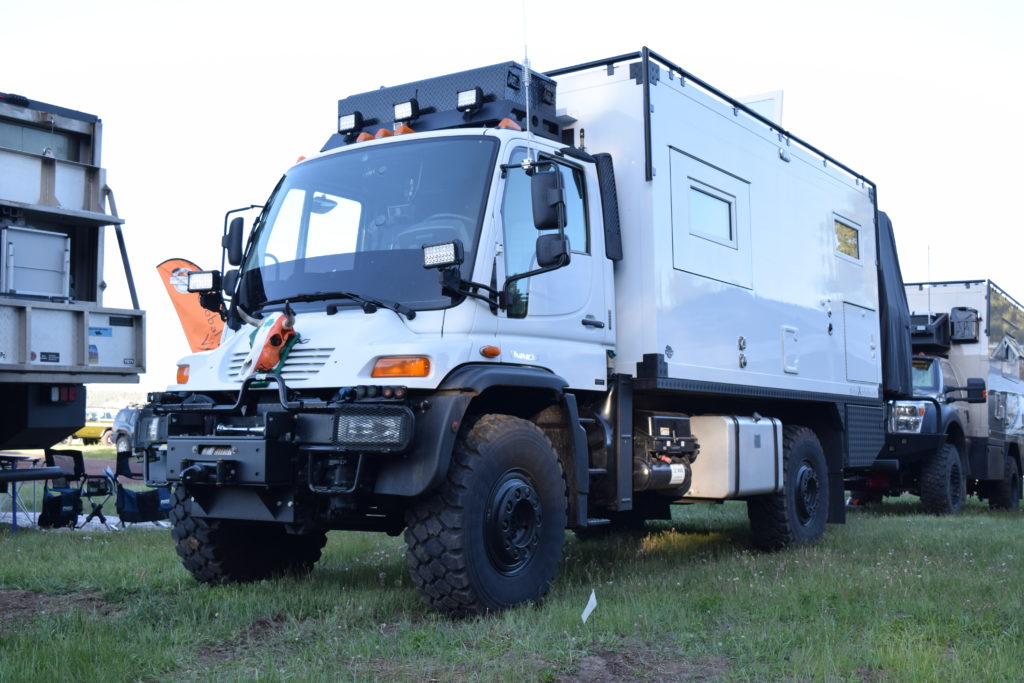 As you’d expect from the folks at Global Expedition Vehicles, the Safari Extreme is light years ahead of the truck camper your grandpa owned. Indeed, it’s more capable, more luxurious, and more extreme than any other camper I’ve ever seen. The Safari Extreme’s 15-foot-long cabin features custom cabinets, granite counter tops, and an exclusive “Natura Opening Wall,” that is 52 inches wide and opens out a full 90 degrees for panoramic views of the outside. Looking for a rig with a large fresh water tank? How does 135 gallons sound? Looking for a rig with lots of battery power? How about a rig with three 270 amp hour AGM Batteries, providing 810 amp hours of power? Other goodies in this drool-worthy rig include a 3,200 watt Onan diesel generator, a 600 watt solar power system, and a Webasto hydronic thermo-90 heater. As for the truck, there probably isn’t a better off-road truck than the Mercedes-Benz Unimog. Unfortunately, the Unimog is a rare sight in the U.S. due to stringent vehicle regulations and emission requirements and the truck’s high cost. 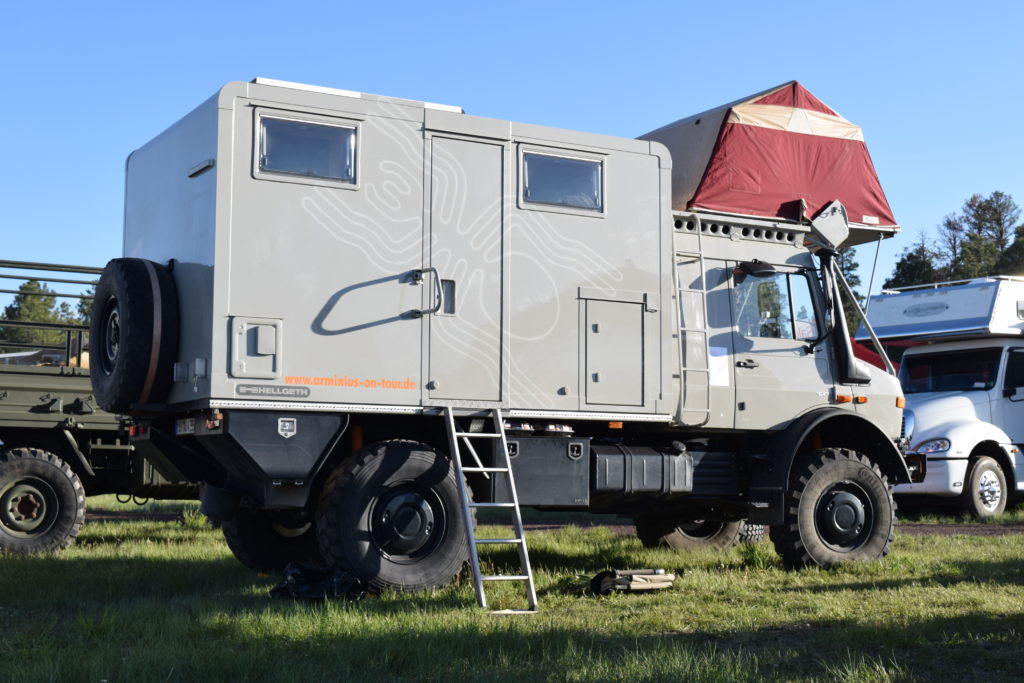 This Hellgeth Unimog camper wowed the show’s 10,000 attendees with its aggressive, muscular look and eye-catching “Nazca Lines” graphics. This “mog” features a 240 horse power Mercedes-Benz diesel, a split gearbox, adjustable Koni shocks font and rear, an automatic leveling system, a 170 liter gas tank, and four massive Michelin 395/85R20 XZL tires on two piece Hutchinson 10×20 Aluminum rims. Some may wonder about the tent. This rig, unlike the standard Hellgeth U1550L camper, has been outfitted to not only seat three adults, but also sleep a third in the cabover tent. The interior of the cabin, which measures is 11.5 feet long and 7.4 feet wide, is pretty spacious. The dinette collapses into a full size, east-west bed and the large bathroom provides plenty of elbow room to shower comfortably. The space heater and water heater are fueled by diesel and the camper is equipped with two large 160 amp hour AGM batteries, a 66 gallon fresh water tank, and a 21 gallon waste water holding tank. 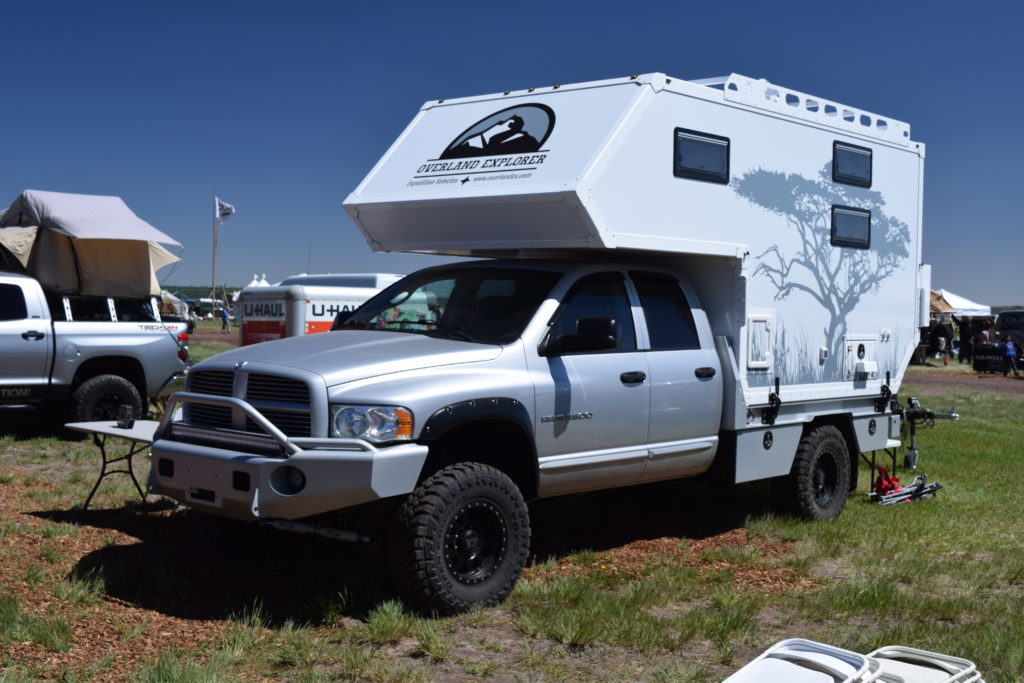 The Overland Explorer Vehicle Summit was a big head-turner at this year’s show. The exterior of this rugged, Canadian-built camper features composite 1.5 inch panels with steel edging for extra strength and durability. The camper’s cabinets are made of a durable, powder coated aluminum with attractive polymer doors while oak and teak accents in the interior give the Summit a warm and inviting feel. Like many of the campers we viewed, the auxiliary systems in this long-bed camper run on diesel instead of propane. These include an Espar hydronic heating system, an on demand hot water system, and a Wallace duo cooktop. The tank capacities of this 2,600 pound camper are pretty generous, too, with a 35 gallon fresh water tank, a 25 gallon gray tank, and a 2.5 gallon tank for diesel. The wetbath, which features a Thetford cassette toilet, is massive and has one of the largest shower spaces I’ve ever seen in a truck camper. Thanks to the ingenious, proprietary tie down system, you can load up the Summit and be on the road in minutes. 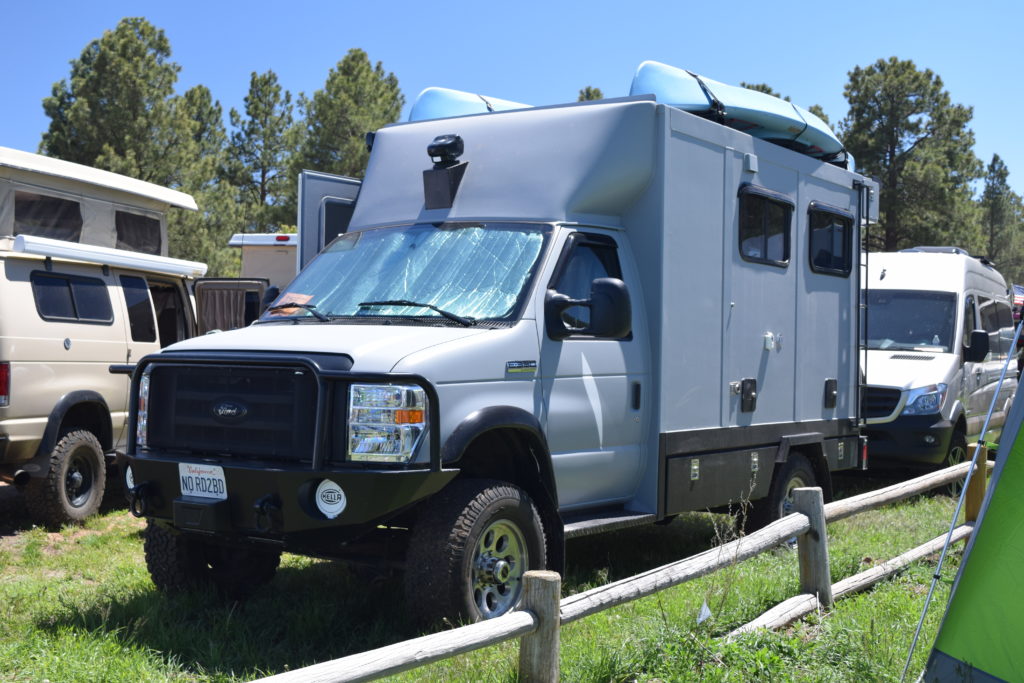 Part of the Overland Expo’s appeal is viewing home-built rigs like this one. This Ford E350 began life as a 4×2 van, but after Alex Fransen got his hands on it, the van ended up as a 4×4 class C. The experts at Sportsmobile performed most of the upgrades for Alex, including a 4×4 conversion, a 6 inch lift, a full floating 4.10 rear axle, an Atlas II 3.8.1 transfer case, ARB front and rear air lockers, and BF Goodrich AT MS size 35 tires. As you can see, most of the van’s body has been cutaway for this build and replaced with a cabin. The interior of the cabin, which was designed and built by Alex, includes an Espar D5 hydronic diesel furnace and on-demand water heater, a 40 gallon fresh water tank, two large AGM batteries providing 400 amp hours of power, and a clever cassette toilet and shower stall which also functions as a counter top when collapsed. The camper, which features impressive wood work as well, also has a large dinette in the rear, which collapses into a full size queen bed. 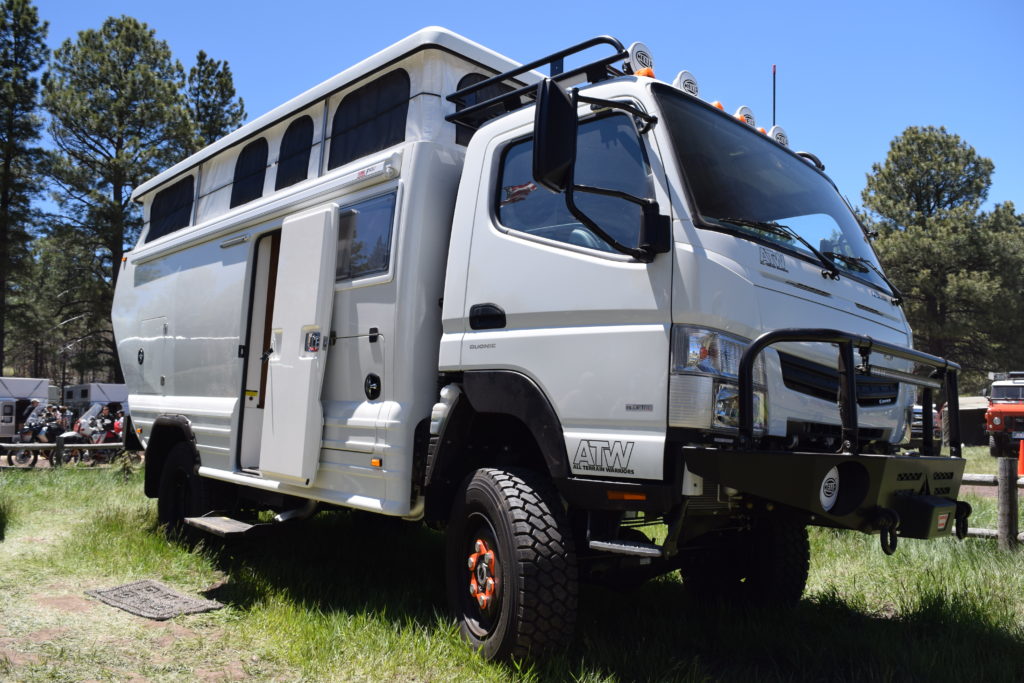 In partnership with Sportsmobile West, Australian-based All Terrain Campers is now offering this highly capable expedition rig in the USA. The Mitsubishi Fuso chassis features a four-cylinder, water-cooled, turbocharged Model 4P10 diesel engine mated with a 6-speed automatic transmission. Unlike most of the rigs featured in this article, this 19-foot-long rig offers a fairly large front-cabin pass-through. The pop-top roof lifts uses an auto-electric lifting system that makes lifting the top quick and easy. The camper offers a full-size queen bed in the rear with under bed storage as well as a large, four person dinette in the front which collapses into a double bed. One feature that we particularly like about this rig is the sloped rear bumper with an easy-to-access dual spare wheel cradle. Other features of this off-roading beast include a 360 watt solar power system, two 210 amp hour AGM batteries, a 55 gallon fresh water tank, a 5 gallon cassette toilet, and a 22 gallon gray water tank. 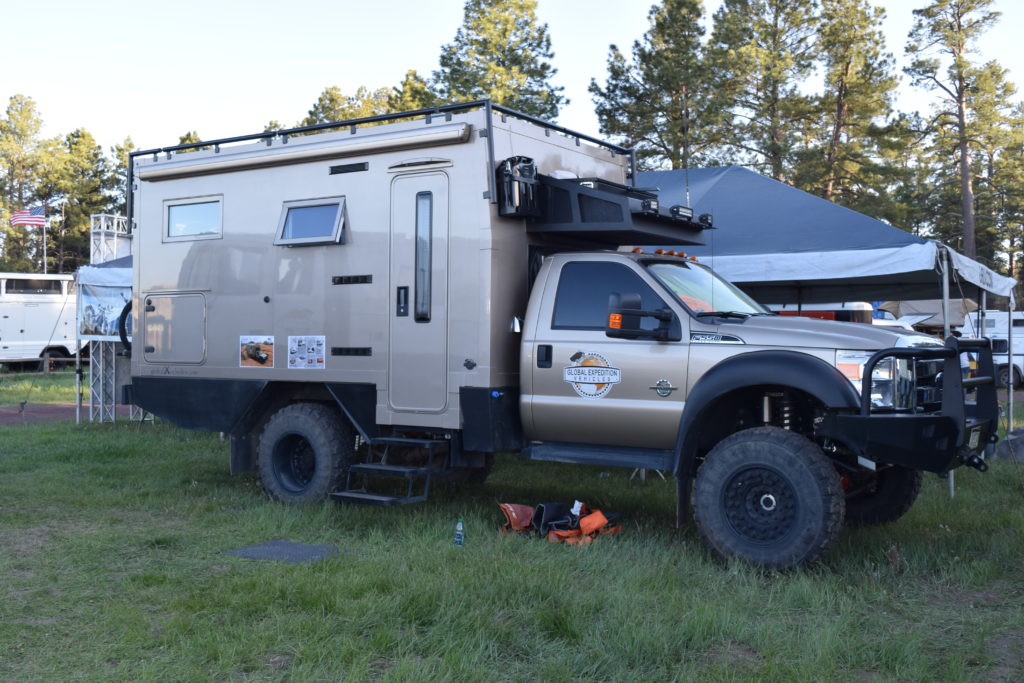 Bigger isn’t always better when it comes to building a capable overland expedition rig. The Turtle is Global Expedition Vehicles’ entry level model, but still packs a punch when it comes to features, capabilities, and comfort. The Turtle is engineered to be mounted on a Ford F-450/F-550, Dodge 4500/5500, International TerraStar, or Mitsubishi Fuso FG-4×4 chassis. Within the Turtle’s 13 feet 3 inch long and 92 inch wide cabin, you’ll find a roomy living space with all the comforts of home including a 54×80 inch bed, a large kitchette with a two-drawer 3.7 cubic foot refrigerator, a two-person dinette, a large bathroom, and several large cabinets to store food, clothing, and gear. The capacities found in this highly capable rig, include a 45 gallon fresh water tank, an 18 gallon gray water tank, and a 5 gallon cassette toilet. Electrical capabilities of the Turtle won’t disappoint either and include a 400 watt solar power system, two 255 amp hour AGM batteries, and a 2000 watt inverter/charger. 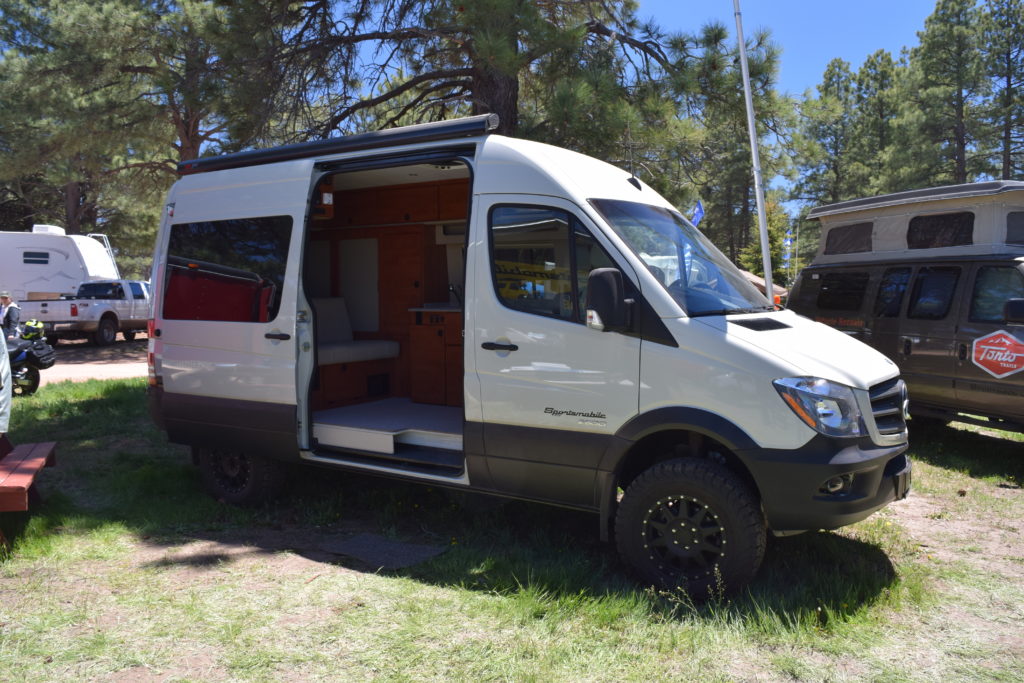 I’ve been a fan of the Sportsmobile for several years. I’m even more so now with Sportsmobile’s release of the 4×4 Mercedes-Benz Sprinter. The 4×4 Sprinter is powered by one of the best diesels on the planet, the 3.0L BlueTec V-6 turbodiesel. The engine, mated with a smooth-shifting, five-speed automatic transmission, is capable of achieving mileage figures between 14 and 18 MPG. Sportsmobile raises the van 4.3 inches in the front and 3.1 inches in the back which gives the rig a 20 percent greater slope climbing ability. Those interested in purchasing a Sportsmobile 4×4 Sprinter have a myriad of choices in size, layout, and options. Far too many to list here. But the high-top model we viewed at the Overland Expo was impressively outfitted with a large kitchenette, refrigerator, a removable porta pottie, and a rear “sofa” that folds down to create a large queen-size bed. Of course, the big bonus for the high-top Sprinter is the ability to stand up in the van without having to lift up the top like the traditional pop-top Sportsmobile.

When it comes to owning and writing about truck campers and adventure travel, James Langan has few equals. Over the past few decades, James has owned several camping rigs. His first was a 1963 Bell [read more]

The 2023 Truck Camper Adventure Quartzsite Rally is now SOLD OUT. The rally will be held in Quartzsite, Arizona, February 9-12, 2023. If you missed out on getting tickets to this outdoor event, don’t fret. [read more]