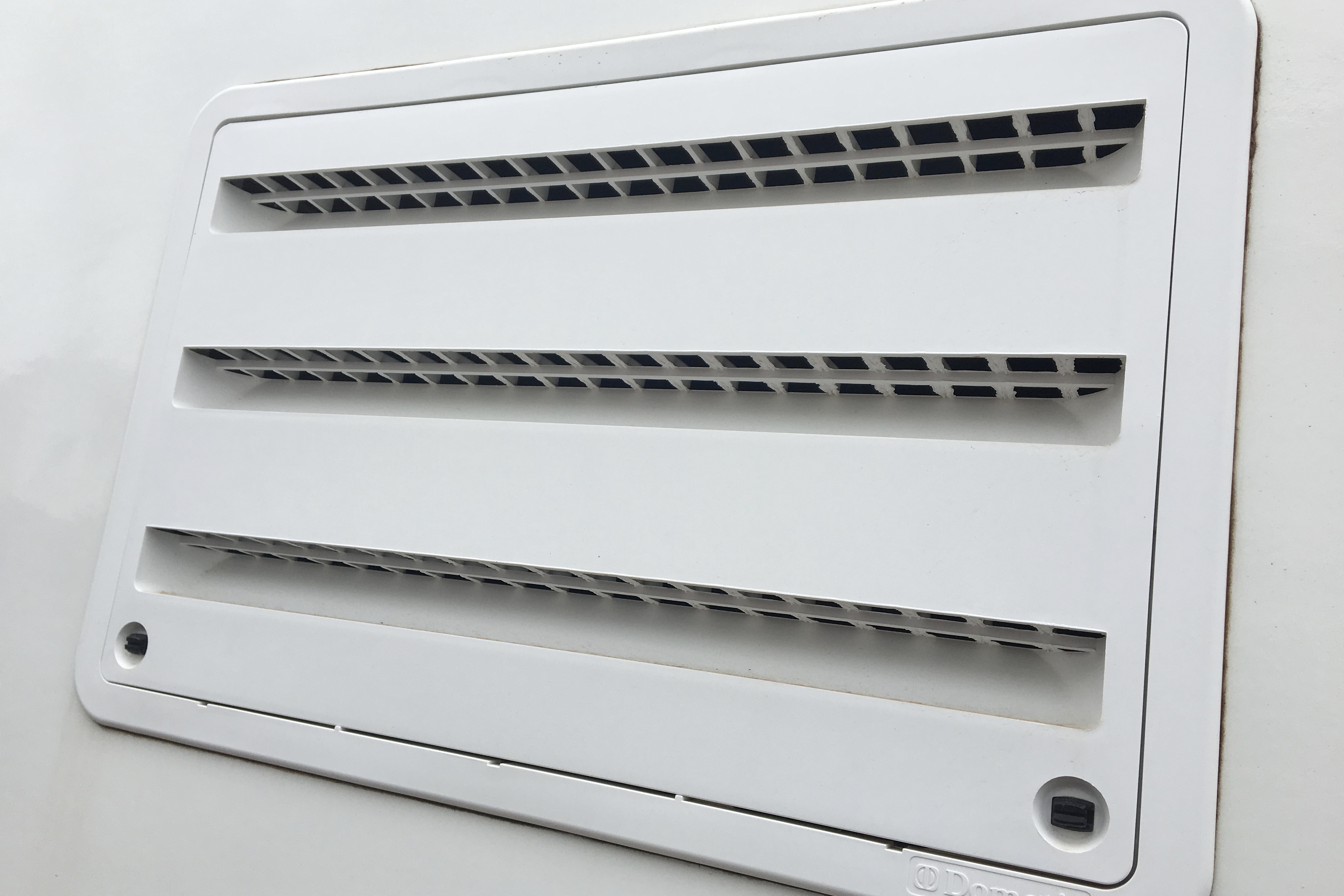 Our first two campers, back in the day, had the usual propane refrigerators. When they were screwed into position in their compartment there was a tight seal on the inside of the camper, bug-tight. Anything that got into the box via the camper side or roof vents couldn’t get inside to annoy you. That’s not to say there weren’t other surprises now and then—mud hornets entering via the 1/4-inch wire mesh at the roof vent come to mind. Ever resourceful spiders nesting in the propane burner tube, nicely inaccessible unless you had armored knuckles, were another.

Our next two campers came with Danfoss compressor refrigerators. No need to level the rig, meaning great for boondocking. No annual cleaning, and beer stays cold regardless of altitude or outside temperature. There are, however, two drawbacks.

First and most obvious is the comparative power consumption. Propane units usually need only power their control boards and safety circuits. Camper house batteries can last a long time, especially if you’ve added solar and have LED lighting. Compressor units, though, can draw close to 6 amps when starting, and average around half that at a usual 50 percent duty cycle—and rather more in hot weather. That can mean more batteries, solar, a generator, wind turbine, or perhaps a fuel cell. We still prefer no-need-to-level, however, and colder beverages are a nice bonus after a mountain hike.

The second difference, bug intrusion, is more interesting. We’ve had two brands of compressor refrigerator, both designed to be installed in a “vent free” environment—think sailboat. Both were also installed in the standard camper compartment designed for propane units, meaning side and roof vents. Here “vent free” means that there’s a cooling vent, into the camper from the refrigerator compartment, at both the bottom and top of the refrigerator. Remember those mud hornets? ‘Skeeters might not make it through the side vent cover, but don’t even notice that 1/4-inch welded wire at the roof. 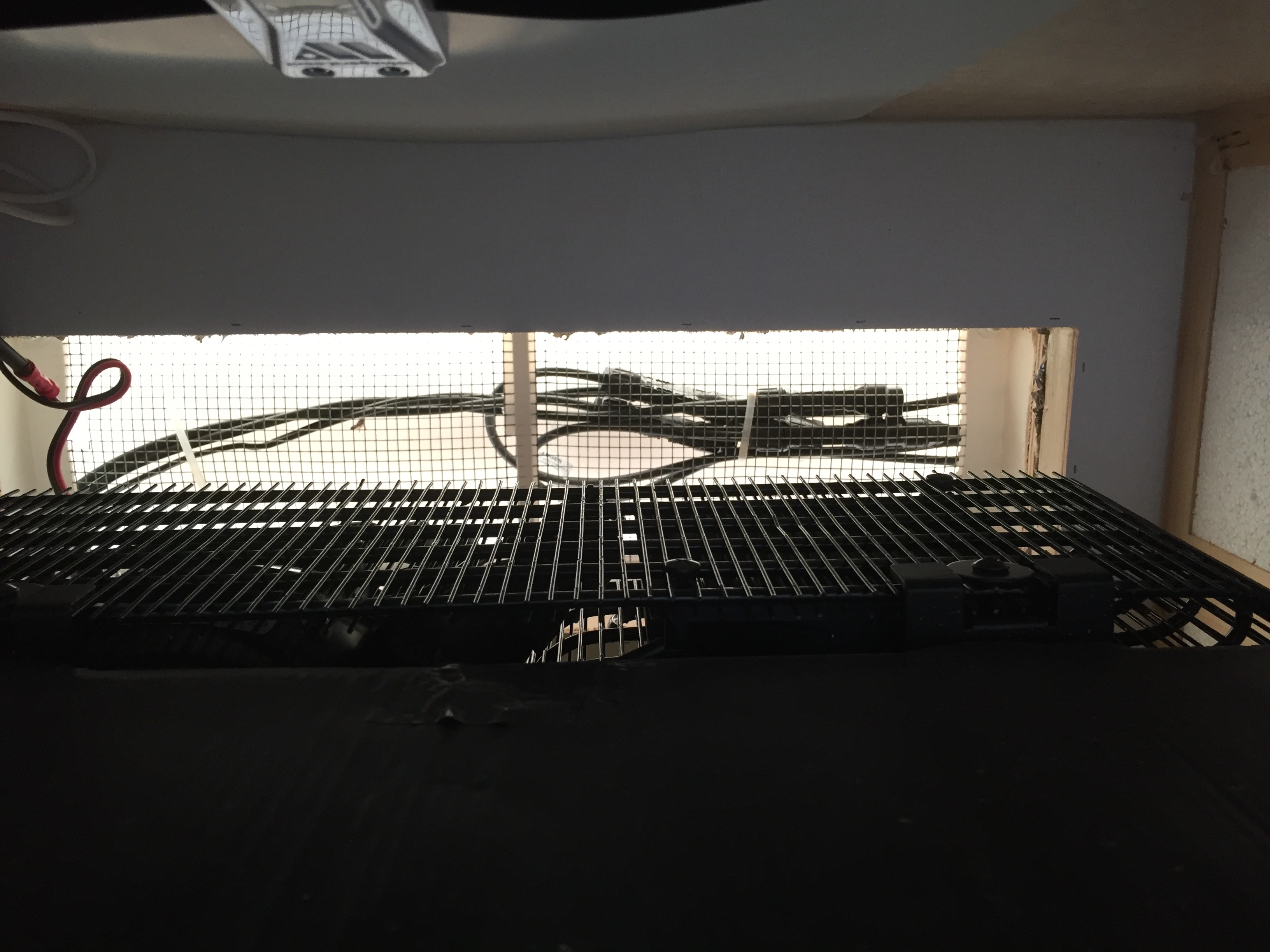 In our first camper with a compressor refrigerator the major intrusion issue was at the roof, so I removed the vent cover and added a layer of wire mosquito netting over the existing large-hole screen. To compensate for reduced convective air flow, just as necessary for compressor units as for propane, I added a DC powered fan at the base of the compartment, directed towards the top, past the condenser and compressor. That was wired to run when the refrigerator was on; it added about 250 milliamps to the overall current draw. I also added some packed fiberglass insulation below and above the refrigerator to slow down air infiltration in colder weather. Problem over for that camper. 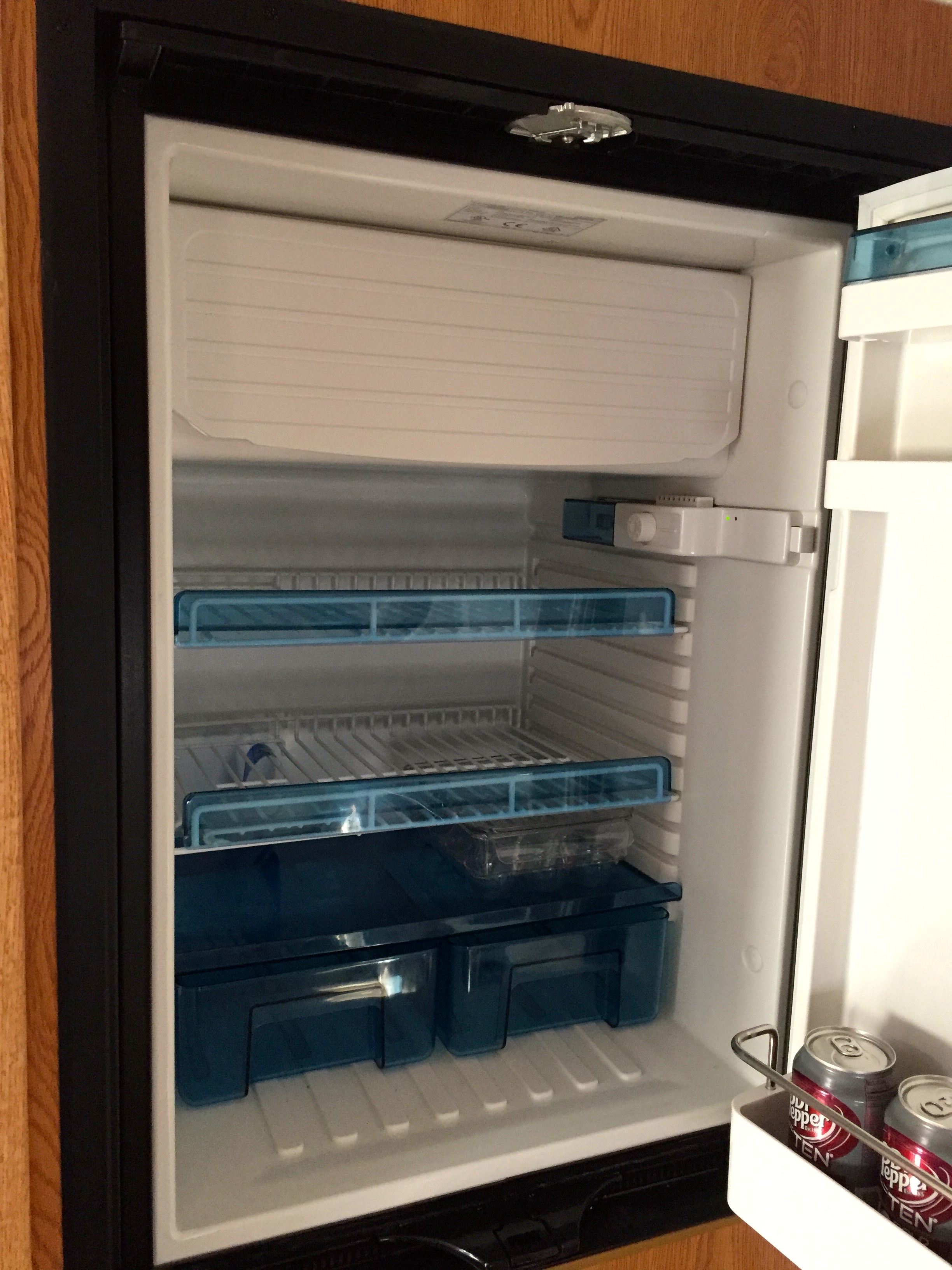 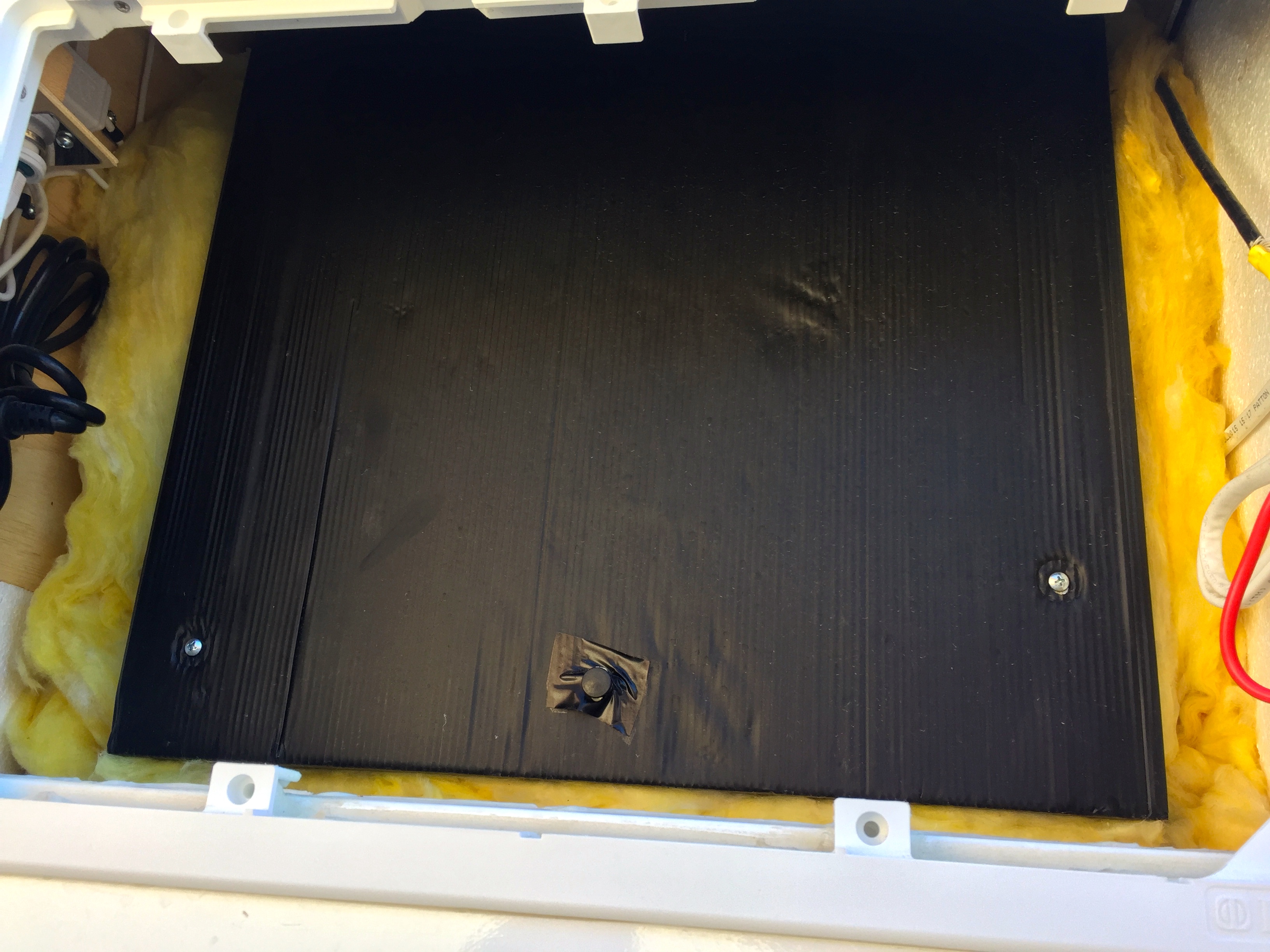 Our current camper has the same top and bottom venting configuration, but I opted to just do the fiberglass stuffing. I’d already added a 300 watt pure sine wave inverter in back of the refrigerator, separate wiring direct from the battery box, with a control switch inside the camper. Not a lot of room left for a fan. Why the inverter? This refrigerator like most of its ilk automatically chooses AC power if it’s available, else runs on DC. However, it’s low-voltage set point isn’t adjustable, and when the house batteries get down to 12.6 to 12.7 volts there’s enough resistance in the standard camper DC wiring (perfectly sized for a propane refrigerator current draw) that the compressor will short-cycle, kicking off in low-voltage cutoff. Start, quit, wait for timer, repeat. This can really stress the compressor and lead to warm-ish milk by the morning. Washing down the iffy milk on the Cherrios with some other readily available bottled liquid, like now-warm beer, is generally frowned upon by significant others not to mention law enforcement, especially if it’s supposed to be a driving day. The dedicated inverter adds close to 1 amp of additional power draw, but since it’s got 8-gauge wire to the batteries it’s low voltage cutoff is a true 11.5 Volts DC. My Efoy fuel cell in the camper kicks in at 12.2 volts and is sufficient to keep the batteries healthy even without sunshine or driving, as long as I keep it on a happy methanol diet. All that aside, as it turns out the fiberglass stuffing has been sufficient to filter out both ‘skeeters and gnats and slows cold air infiltration significantly.

So, should you opt for a compressor refrigerator either as a replacement for a failed propane unit, or in a new camper, think about those venting—and bug issues—when making the decision. One way or another you’re going to have to cope, but there are simple solutions.

It’s guaranteed to happen. Summer travel invariably brings an unsightly mosaic of bug splatters across the front of your truck camper rig. It sucks, but there’s not much you can do about it. You’re going [read more]