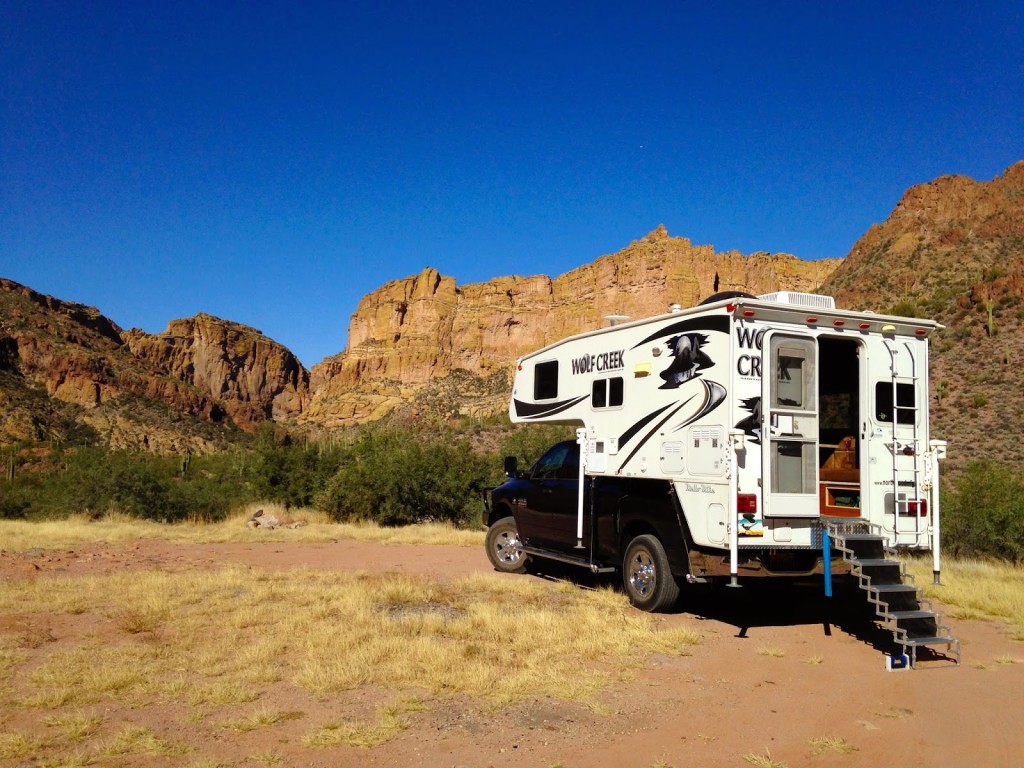 The Apache Trail, located in the heart of central Arizona, is known for its breathtaking beauty, but for those who enjoy outdoor recreation like boating, fishing, and hiking, it’s also a first-rate attraction. Located within the Tonto National Forest, the Apache Trail is also one of Arizona’s most scenic drives and has been designated a USFS Scenic Byway. I’ve driven the trail four times, but I’ve never had an opportunity to do some serious boondocking and fishing along it until last weekend.

Fish Creek Canyon is perhaps the best and most scenic part of the drive. The steep, copper-colored canyon walls and jutting peaks provide a spectacular backdrop to the creek below. Unfortunately, the creek is actually a wash and flows only during rain storms, but the amount of rain is enough to water the abundant Arizona Sycamore and Cottonwood trees that line the creek. These tall, leaf bearing trees provide a stark contrast–especially in late fall–with the ubiquitous Saguaros and Ocotillos seen on this drive. The trail that passes along Fish Creek is a dirt and gravel surface. Since the creek can fill quickly after a rain, two large, single-lane bridges have been constructed to provide year-round access.

Fish Creek Canyon has two established sites where you can boondock. Neither one is developed. You won’t even find a fire ring though there was evidence of a recent campfire where we were camped. November is a great time to explore the Apache Trail. The weather while we boondocked was darn near perfect–a high of 80 degrees during the day and a low of 59 at night, perfect sleeping weather. While were were camped we were fortunate to have a full moon which bathed the canyon in an eerie yet spectacular glow during the night. Cell reception? Not down in this deep canyon, though you will find AT&T 3G service further east near the Apache Lake Marina and AT&T 4G service at the end of the trail at Roosevelt Lake.

Take Up The Fight with the NMOHVA

As most of you know, I don’t advertise or promote many causes on this website. However, a few causes are worthy of discussion and promotion and one of these is the fight against the US [read more]

The 2021 Truck Camper Adventure Boondocking in the Desert Rally in Quartzsite, Arizona enjoyed a record showing in what was probably the largest truck camper rally ever held. Consisting of 173 attendees and 107 campers [read more]