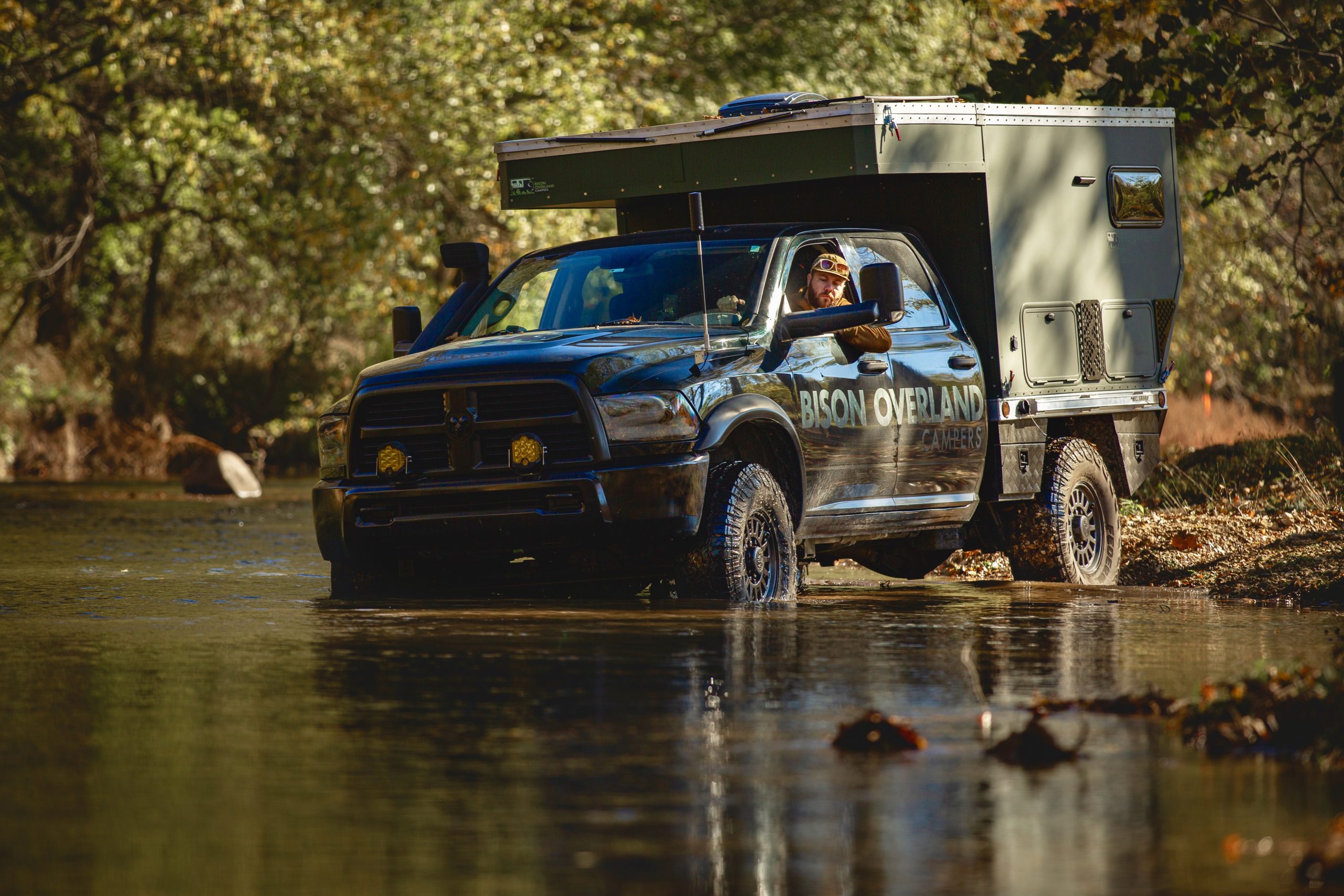 The truck camper industry has experienced a Renaissance lately with several companies starting-up. Tulsa, Oklahoma-based Bison Overland is one such company. In fact, the fledgling company just released an aluminum, flatbed pop-up called the Space Wrangler that, according to the company, “takes quality and style to a new level.” Not only is Bison Overland capitalizing on the popularity of truck campers in general, but the flatbed truck camper market specifically. The segment is exploding in popularity.

With its low profile, narrow girth and angled rear kick back, the Space Wrangler is not your grandpa’s truck camper. The flatbed pop-up resembles the Four Wheel Camper Flatbed Hawk, only stronger, with added window and door enhancements and a more aggressive, military-look. The welded aluminum frame features 1/8-inch aluminum trim and a thicker 1/16-inch skin on the exterior that holds up to abuse from branches on the trail better. The Wrangler’s roof is constructed using a full composite, one piece roof panel with an aluminum frame that is strong enough to stand-on. Better yet, their jack mounts are built into the base of the frame to keep the center of gravity low, providing less wobble when mounting and removing the camper.

Bison Overland is co-owned by Drew Phillips and Cody Densmore, a good friend who shared Drew’s enthusiasm designing and building a new flatbed pop-up camper during the COVID-19 lockdown. With a few tweaks here and there, the final Space Wrangler prototype was completed during the spring. After posting the impressive results of the build on Instagram, interest in the camper skyrocketed. Additional orders were placed almost immediately.

“The big things we wanted in our camper was inside-outside storage access where you don’t have to be climbing in and out of the camper all of the time,” Phillips said. “We wanted to have the option to cook outside and grab all of your cooking stuff outside when you need it. We also wanted beefier material that would hold up better to a decent size branch, so we added thicker trim and skin all the way around. We also wanted a more modern take than those built by other companies like Four Wheel Campers. Their campers are great—we’ve owned several—but there’s always room for improvement. We really like the Tern Overland windows and door, which we think are a major improvement. We’re really happy with the way our camper turned out.” 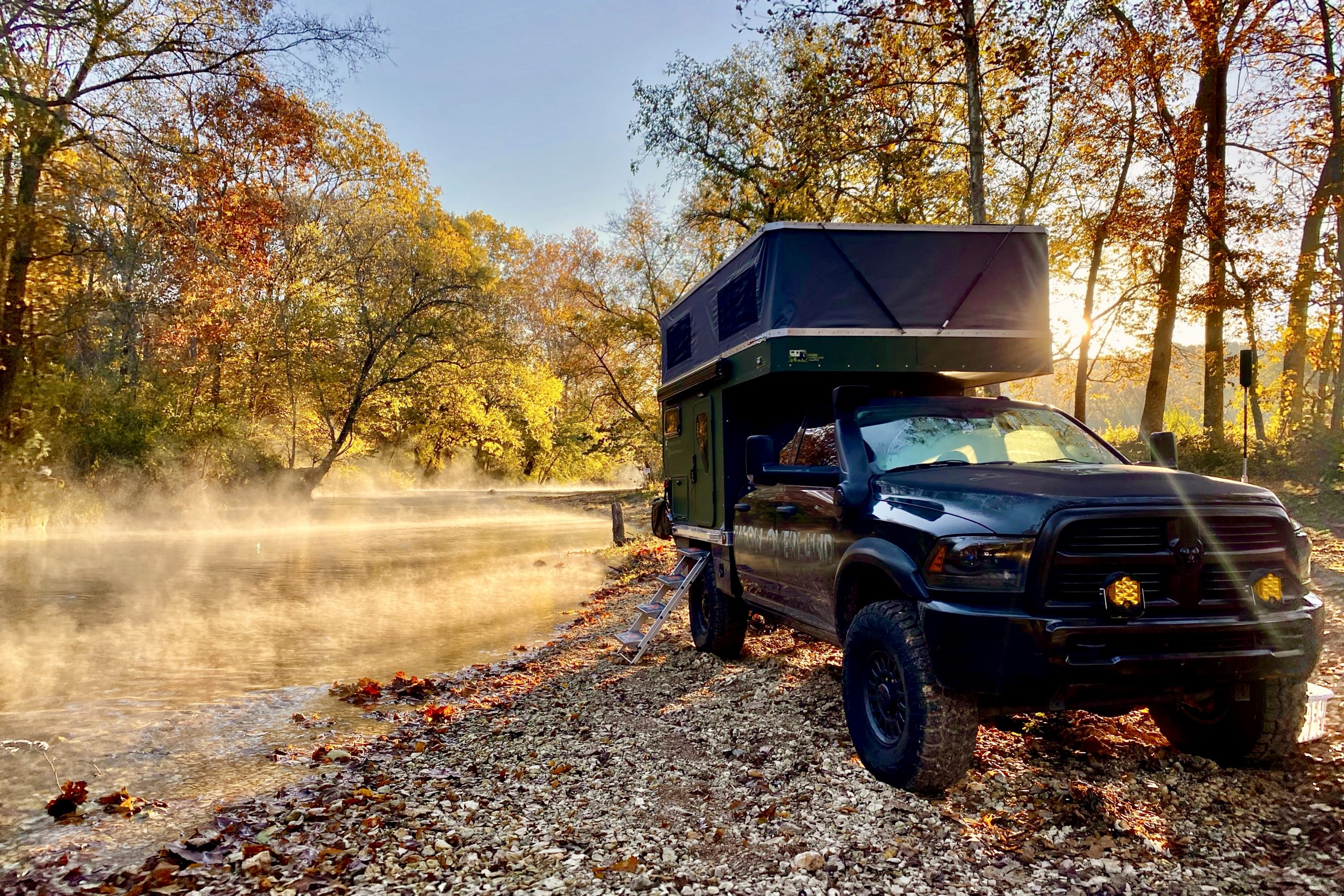 Available in different exterior colors, like black, desert tank, and green, the Space Wrangler shell weighs a little over 1,200 pounds, while the full build-out with the kitchenette, dinette, holding tanks, and cabinetry is expected to weigh between 1,500 and 1,800 pounds. The Space Wrangler can be ordered in 6-foot and 8-foot XL lengths for full-size trucks as well as a smaller mid-size truck and Jeep Gladiator option, one we’re really looking forward to seeing. The aluminum tray is sourced from Kansas-based Hillsboro Industries.

Phillips tells us that the Space Wrangler can be ordered as a simple shell for $20,000 until year’s end or with an interior build-out for a yet-to-be-determined price in early 2021. The standard build provides an east-west cabover, but the company also offers a unique “garage” option underneath a north-south bed large enough to carry two mountain bikes on a full slide-out tray. The Space Wrangler floorplan with garage is 8-feet 6 inches long.

“We just got our camper plans certified by an engineering firm that went through everything. We were really pleased that they didn’t make any significant changes in our design as far as structure and strength—we actually over-engineered the prototype—they redesigned the frame to make it go together a little more efficiently, they actually took some stuff out to make it a little lighter. Everything fits together better. It gives us peace of mind knowing that it’s engineered right and will hold up,” Phillips said.

Bison Overland has a big hill to climb competing against industry juggernaut, Four Wheel Campers and others, but Bison Overland’s Space Wrangler is different in one important aspect. “As far as I know, we’re the only company building a flatbed shell. It’s nice to be able to offer one for those who want a lower-priced, high-quality option,” he said.

For more information about the Space Wrangler, check out the company’s website at www.bisonoverlandcampers.com.

Live Free With Kid and Gypsy

BundutecUSA just relaunched the Topi, a rugged, pop-up truck camper made for mid-size trucks. Originally released in 2019, the relaunched Topi features a redesigned floorplan with the refrigerator and all of the camper’s storage compartments [read more]