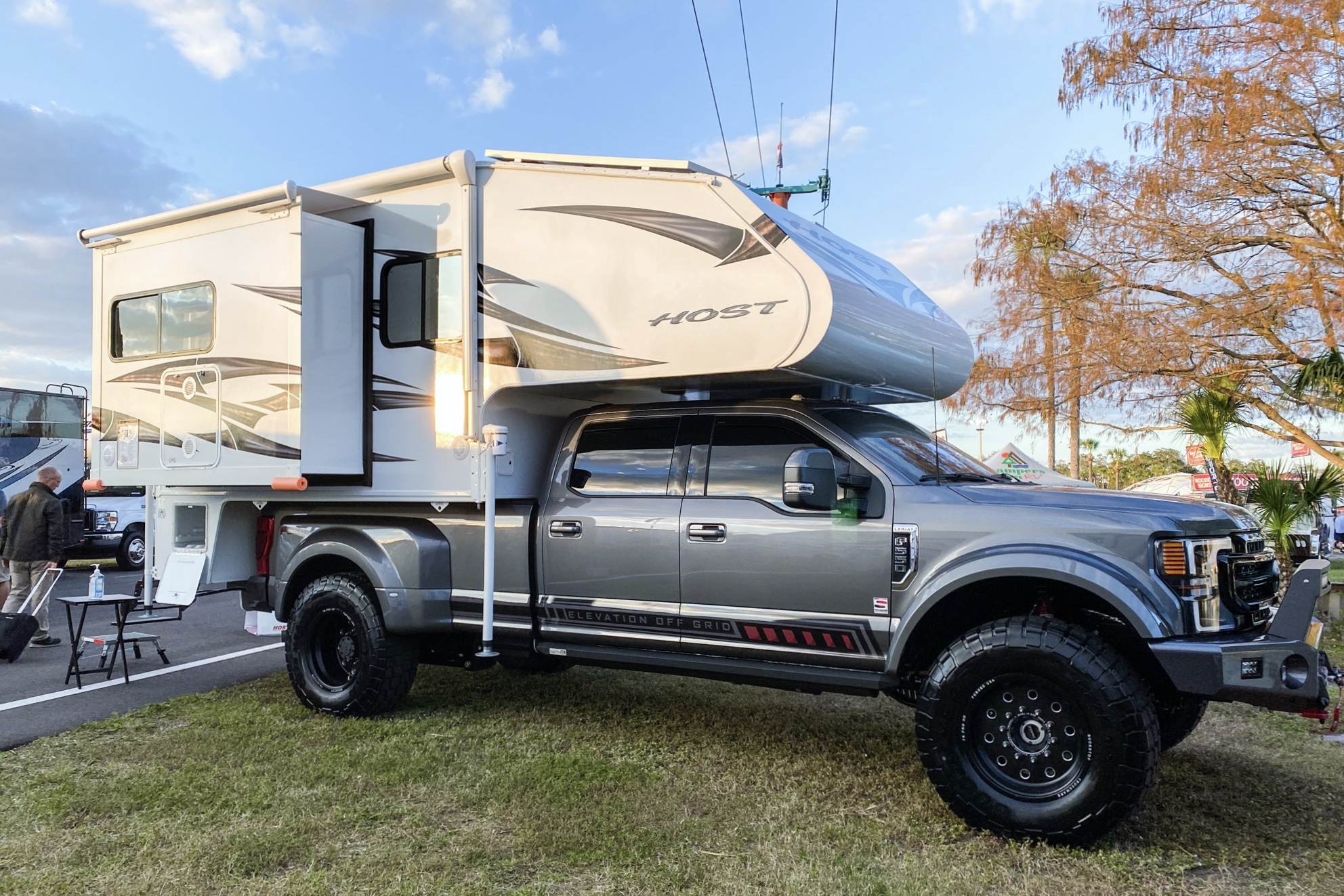 Fortunately, engineers at Ford, GM, and FCA have been hard at work upping the ante when it comes to the payload of one-ton trucks. This is good news because payload is number one when it comes to buying a truck to haul a truck camper. Aside from the cost, there isn’t a more important number when building a rig. How is a truck’s payload rating determined? By subtracting the curb weight of the truck from its gross vehicle weight rating (GVWR), which for today’s one-ton truck ranges from 10,700 to 14,000 pounds. When it comes to payload, more is better. A difference of 400 to 500 pounds in payload may not seem like much, but when it comes to hauling a truck camper, that difference can be big.

When it comes to payload, options can either hurt or help the rating. As a truck camper owner, you should always opt for the “max tow package” or equivalent as this option maximizes payload. Yes, having a diesel engine is great for climbing mountains and raising your testosterone, but it’s also heavier, nearly twice as much as a gasoline V8. This means less payload—not to mention more emission hassles—for you. Ditto for cab size. A crew cab outweighs a standard cab roughly 400 pounds. However, we were pleasantly surprised to find that opting for a heavier 4WD drivetrain—350 to 400 pounds extra over 2WD is typical—doesn’t significantly hurt the GVWRs of today’s one-ton truck. This is because the big three offer the 4WD option with a corresponding increase in GVWR and by extension payload. Unfortunately, this increase doesn’t appear to be offered for lower-rated Ford and Ram 3/4-ton trucks.

The lone exception to the “more options is bad for payload” mantra is the dual rear wheel (DRW) truck. When it comes to payload, the dually is king and it isn’t even close. Yes, having four wheels and tires on the rear axle makes the truck wider, but it also adds stability and more payload. How much more? In many cases 2,200 pounds and more. This puts one-ton dually payload ratings well above 7,000 pounds, making the truck appealing to those who are shopping for a long-bed truck camper with multiple slide-outs like the Host Mammoth.

A few words about the payload rating charts included in this article. Only the standard gasoline engine is included for each make. This is because a diesel engine weighs between 400 and 500 pounds more than its gasoline counterpart. In an article that touts the best payload ratings, it wouldn’t make sense to include them (we have, however, included the weight differences in the individual truck write-ups to help calculate an approximate payload for those who still want a diesel). Other options, though, like drivetrain—either 4WD or 2WD—cab size, and bed sizes are included in our charts because tastes and needs vary from one truck camper owner and another. Note also, that the ratings in our charts represent a sampling of what’s available. Ratings vary by trim level and options, so an even higher GVWR and payload rating may be obtained depending on which options you choose. So without further adieu, lets take a look at the best 1-ton trucks for maximum payload and hauling a truck camper. 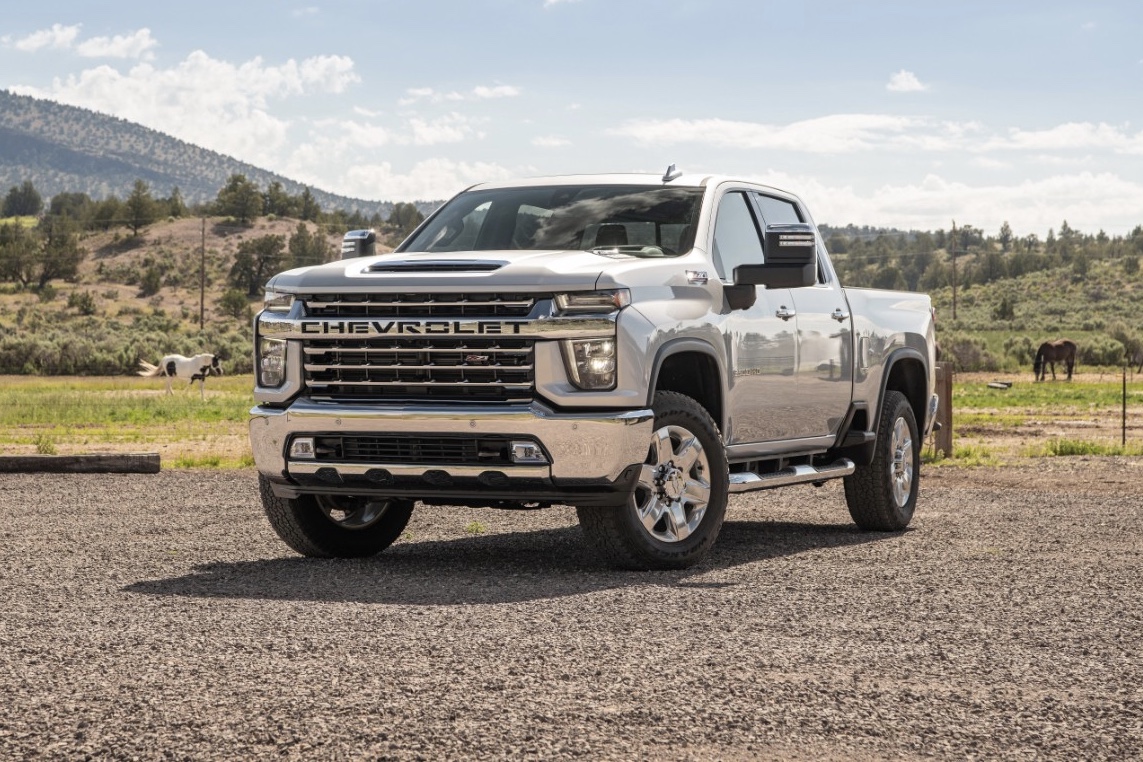 Minimal changes were made to the Silverado is 2022. The standard offering for the Chevy Silverado 3500HD is a small block, gasoline-powered 6.6L V8 that generates 401 horsepower and 464 pound-feet of torque. The small block’s output is linked to a mediocre 6-speed automatic transmission with a 3:73 rear axle. However, Chevy offers one of the best diesel powertrain combinations for your truck camper rig: the venerable Duramax turbo diesel 6.6L V8 mated with an Allison 10-speed automatic with a 3:42 rear. The Duramax cranks out 445 horsepower and 910 pound-feet of torque. Unfortunately, at 835 pounds, the Duramax weighs a good deal more than the 6.6L small block V8, which tips the scales at 523 pounds, but that’s the tradeoff when you go with a diesel. Compared to the competition, Chevy’s payload ratings are a mixed bag. While we were impressed with the 4,593-pound payload and 11,350-pound GVWR of a Chevy 4WD crew cab truck with a 6.8-foot bed, we were disappointed with the lowly 4,273-pound and 11,150-pound GVWR ratings of a 2WD crew cab with an 8-foot bed. 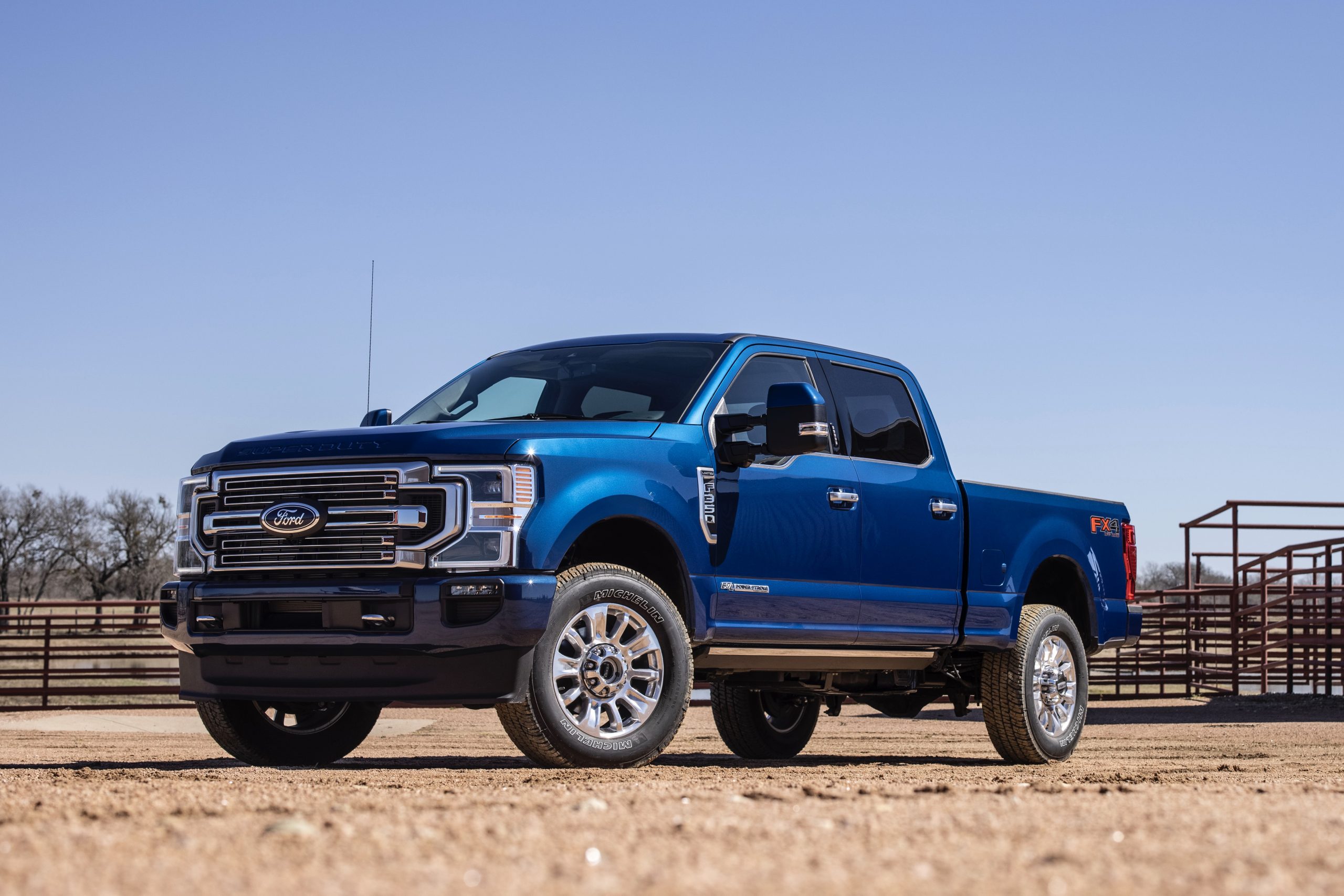 The Ford Super Duty retains it position as the top-selling heavy duty truck in America. The Ford Motor Company offers three excellent engines in the 2022 F-350. The tried and true Boss 6.2L V8 with 385 horsepower and 430 foot-pounds of torque comes standard, while the relatively new Godzilla 7.3L V8 gasser with 430 horsepower and 475 foot-pounds of torque is offered as an option. Each is paired with an excellent 10-speed automatic with your choice of three rear axles: 3:55, 3:73, and 4:30. The optional 6.7L Power Stroke turbo-diesel V8, also paired the 10-speed automatic, generates 475 horsepower and a whopping 1,050 pound-feet of torque. At 990 pounds, the 6.7L Power Stroke is a good deal heavier than the Boss V8, which tops the scales at 580 pounds, and the Godzilla V8, which maxes out at a surprisingly low 535 pounds, so “weigh” that option carefully. Ford payload ratings compare very favorably with the competition. A payload of 4,460 pounds with a GVWR of 11,300 pounds can be purchased by going with 4WD F350 crew cab with a 6.75-foot bed, whereas a 2WD crew cab with an 8-foot bed can maxes-out with a 11,100 GVWR and an identical 4,460-pound payload. Of course, the only negative going with a Ford is the taller cab that requires some kind of riser in the bed to keep the truck camper from touching the top of the cab. 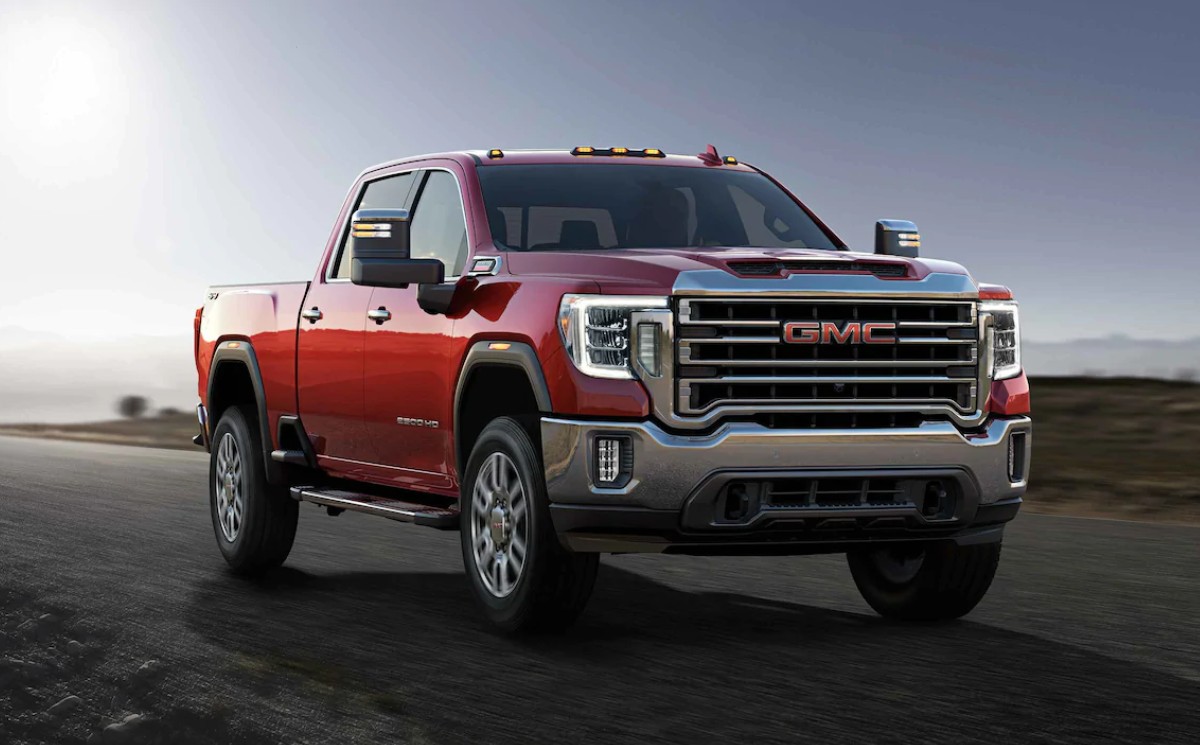 The GMC Sierra HD is a new offering for 2020. The differences between the Chevy 3500HD and Sierra 3500HD are pretty minor, of course. Powertrain and drivetrain options are nearly identical with only minuscule differences noted for payload. Like Chevy, the standard offering is a small block, gasoline-powered 6.6L V8 engine linked to a 6-speed automatic transmission with a 3:73 rear axle. As an option, the superb Duramax turbo diesel 6.6L V8, which cranks out 445 horsepower and 910 pound-feet of torque, is mated with the excellent Allison 10-speed automatic and a 3:42 rear. Yes, the Duramax is a good deal heavier than the V8 gasser that weighs in at 523 pounds, but hauling that extra weight might be worth it since at 835 pounds the Duramax diesel weighs considerably less than either the Cummins or Power Stroke offerings. Like Chevy, GMC’s payload ratings are both lower and higher than the competition. While we were impressed with the 4,584-pound payload and 11,350-pound GVWR of a GMC 4WD crew cab truck with a 6.8-foot bed, we were disappointed with the 4,263-pound and 11,150-pound GVWR ratings of a 2WD crew cab with an 8-foot bed. The DRW payload rating, however, more than makes up for that deficit if you decide to haul a large hard-side truck camper. 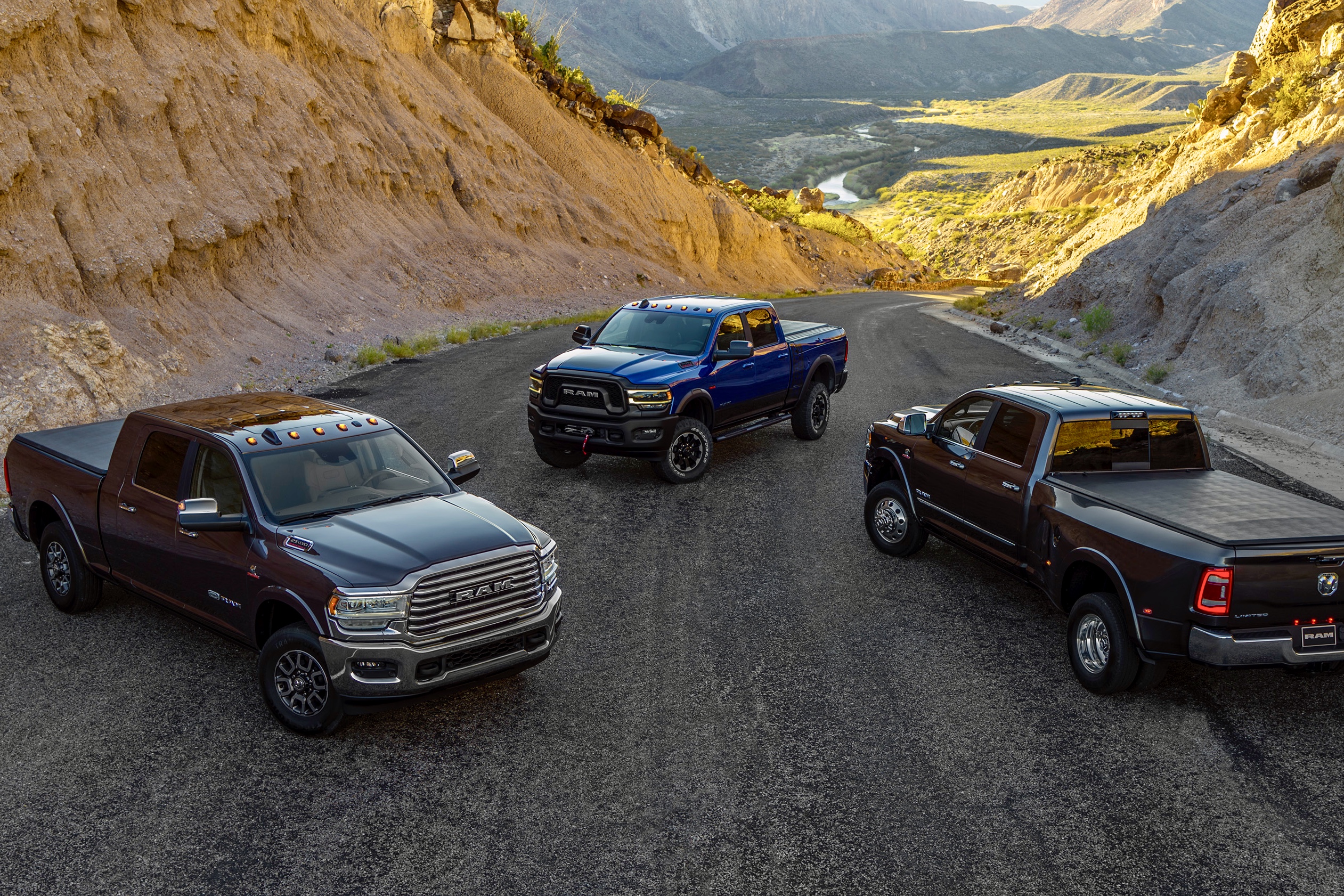 The 2022 Ram 3500 holds up very well when compared to the competition. Two very capable engines are being offered by FCA for the Ram 3500 in 2022. The standard offering is a gasoline-powered 6.4L HEMI V-8, which cranks out 410 horsepower and 429 pound-feet of torque. The V8 is mated with an excellent 8-speed automatic transmission with your choice of either a 3:73 or a 4:10 rear axle. The superb 6.7L Cummins diesel I6 is offered as an option, of course. Consumers can choose between either the standard Cummins, which generates 370 horsepower and 850 pound-feet of torque, or an HO version, which makes 400 horsepower and an jaw dropping 1,075 pound-feet of torque. Both diesels are backed by an aging yet still effective 6-speed automatic with either a 3:73 or a 4:10 rear axle. At 1,060 pounds, the Cummins outweighs the HEMI by a substantial 490 pounds, so the Cummins should be avoided if you’re looking to maximize payload. Overall, Ram’s payload ratings compare very well to Ford and GM. A payload of 4,255 pounds with a GVWR of 11,000 pounds can be achieved by going with a 4WD Ram 3500 crew cab model with a 6.4-foot bed, while a 2WD crew cab with an 8-foot bed can achieve a 11,100 GVWR and 4,507-pound payload, perfect for a large truck camper like our very own Bundutec Roadrunner. 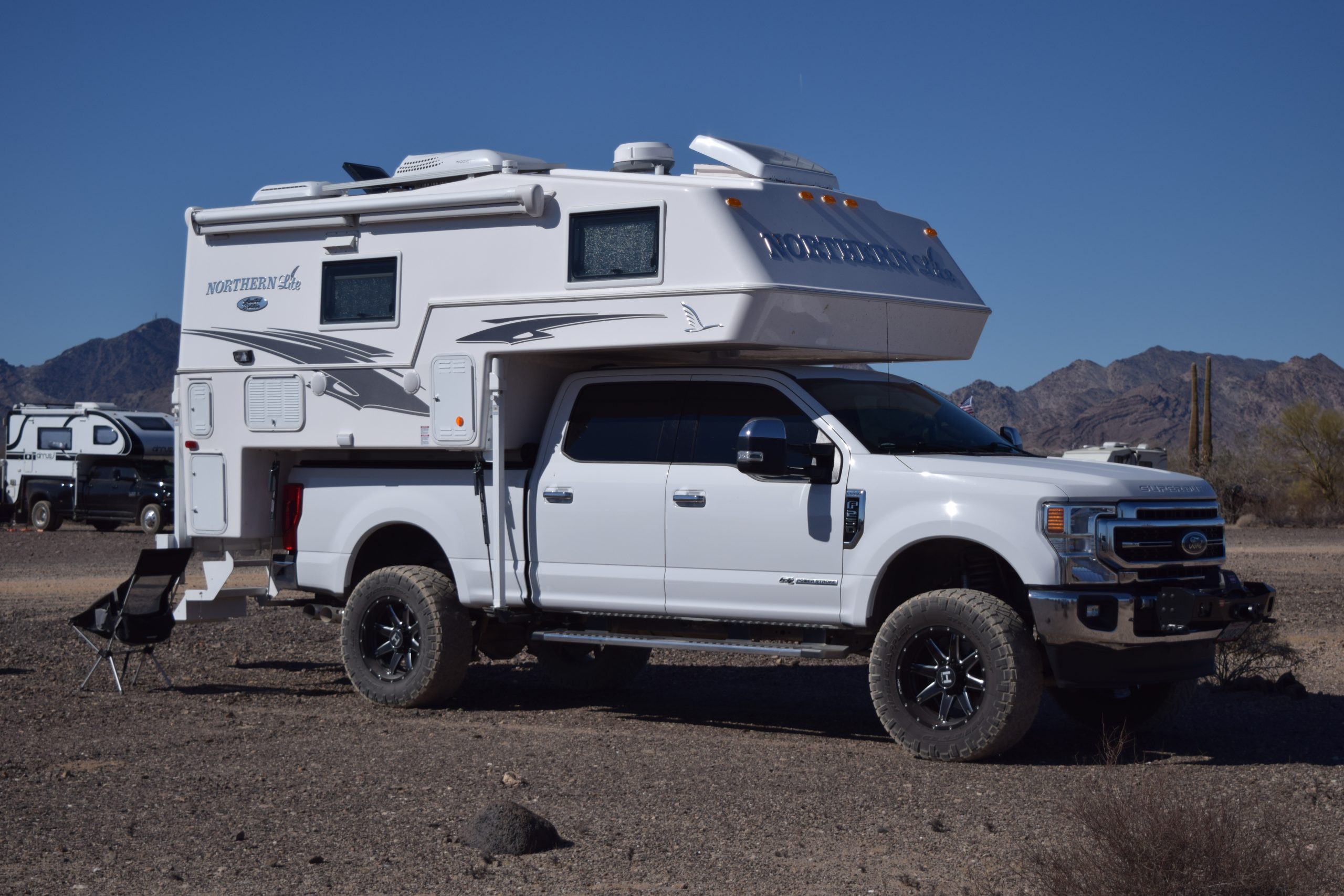