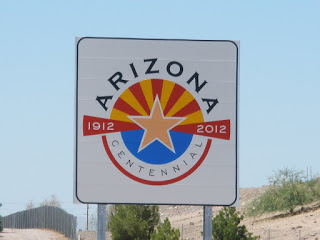 February 14, 2012, marks the centennial of the great state of Arizona. Did you know that Arizona was the 48th state admitted and was the last land-locked state to be added to the Union? And that the state has more native American tribes and more tribal reservation land per square mile than any other state in the union? While the Grand Canyon tops the list of Arizona’s attractions, there is so much more to see and do here. Some of these include Canyon de Chelly, the Apache Trail, Monument Valley, Sedona, Quartzsite, the White Mountains, and the Saguaro National Park.

As you can probably tell, I have a deep love for this state. I was born in Tucson nearly 50 years ago as an Air Force brat and spent half of my childhood here. Some of the most endearing memories of my childhood occurred in Arizona–the desert mountains, the Saguaro cacti, the Arizona-Sonora Desert Museum, the Roadrunners, and the Arizona sunsets (is there anything in nature more beautiful than an Arizona sunset? I don’t think so). After spending the rest of my growing up years in Ohio, and after serving in the Navy for 24 years, I decided to return to Arizona with my family and live in this great state again. I’m sure glad we did. 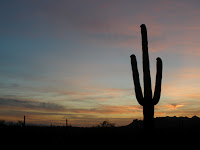 I love the geologic diversity of Arizona. The state is known primarily for its desert climate, with triple-digit summers and mild, 70 degree winters, and its magnificent Saguaro’s, yet the desert is found in only the south. In the northern part of the state you’ll find thick forests of pine, fir, and spruce sitting atop numerous mountain ranges and the Colorado Plateau. In contrast with the southern part of the state, which is quite arid, the northern half receives significant amounts of snowfall each winter. These snowfalls support three ski resorts in the state, including one on Mt. Lemmon near Tucson, and in the spring, feed several large reservoirs. Whether you enjoy camping in the desert or at higher elevations in the forests, Arizona has it all, year round. Which is one reason why we, and millions of others, like it here so much. Now for a few fun facts about the state:

The Arizona State Flag:  The history of the Arizona state flag is interesting and began a few years before the state was admitted to the United States. The creation of the flag came about as a result of the national rifle matches that occurred in Ohio each year. In 1910, the rifle team representing Arizona noticed that they were the only team that didn’t have a flag or emblem. The rifle team’s leader, Colonel Charles W. Harris and by Carl Hayden, Arizona’s first representative in Congress, began work on the design later that year and with the help of Hayden’s wife, Nan, who did all of the sewing, the first flag was proudly displayed by the rifle team the following year. In 1912, Colonel Harris, who was then serving as Adjutant General for the state, designed a similar flag that was used by the rifle team that would eventually become the official state flag in 1917.

The official Arizona State flag measures four feet high by six feet wide, and is divided into a top half and bottom half with a large five-point copper star in the center. The top half represents the original 13 colonies of the United States and the rays of the setting western sun. The copper star in the middle of the flag identifies the state as the nation’s largest producer of copper. The shade of red in the rays of the sun and the shade of blue found in the lower half of the flag are the same shades of blue and red found in the U.S. flag. Finally, the blue and gold colors found in the flag are also Arizona’s official state colors.

Financial Advisor Quits Job to Live on the Road

For some people, money is everything, but not for 30-year-old Phil Kockerbeck who worked as a financial advisor and made a fine living doing it. Phil enjoyed helping others achieve their retirement goals, but he [read more]

The Magnificent Saguaro: Sentinel of the Sonoran Desert

Known as the “Sentinel of the Desert,” the magnificent Saguaro (pronounced Sah-wah-roh) is perhaps the most prominent icon of the American West and the great state of Arizona. If you’ve ever visited southern Arizona before, [read more]