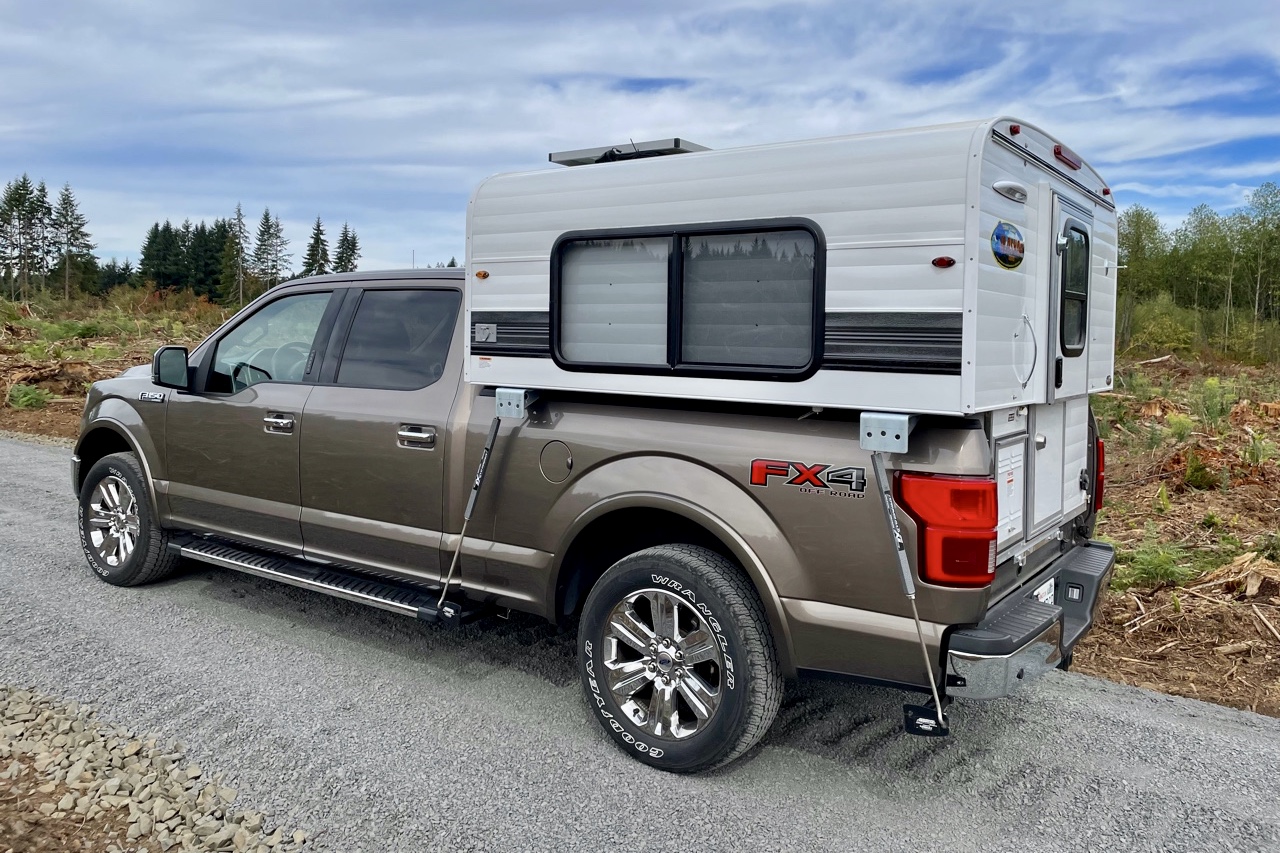 In exclusive breaking news, Truck Camper Adventure has just learned that Alaskan Campers will be launching its new Sportsman truck camper at the 2021 Overland Expo West. Designed with the minimalist in mind, the non-cabover camper is only 6-foot 6-inches long and weighs only 1,449 pounds wet, perfect for short-bed half-ton pickups like the Ford F150, Ram 1500, and Chevy/GMC 1500.

Designed by Alaskan CEO, Bryan Wheat, the Sportman’s floorplan is simple. The driver side features a small kitchenette with a stove and sink with a storage locker large enough to house a portable toilet located on the passenger side. Sleeping and seating is provided by an attractive jack knife sofa that sits along the front wall with a 45L refrigerator-freezer mounted underneath.

“We’ve built a couple campers similar to this, but with the Sportsman we’re trying to get into the ‘less-is-more’ crowd,” Bryan said. “They don’t want all of the bells and whistles, they just want something to go up in by themselves, or with a buddy, wife, or girlfriend, and fish, hunt, or do whatever, not glamping at a campground or RV park. We also wanted to get into a price point at $25,500 that the younger crowd could afford.”

Combining the best elements of a pop-up with a hard-side, the Alaskan camper is quite unlike any other camper in existence today. Ditching the canvas for a more rugged and durable design, the cornerstone of every Alaskan camper is the radiused hard-top that hydraulically raises and lowers with the flip of a switch. Not only does the windowed hard-top offer better insulation for a more satisfying, four-season camping experience, but it also incorporates a full-length door for easier entry—no stooping is required. The raised top in the Sportsman provides a full 6-feet 3-inches of headroom inside the camper. 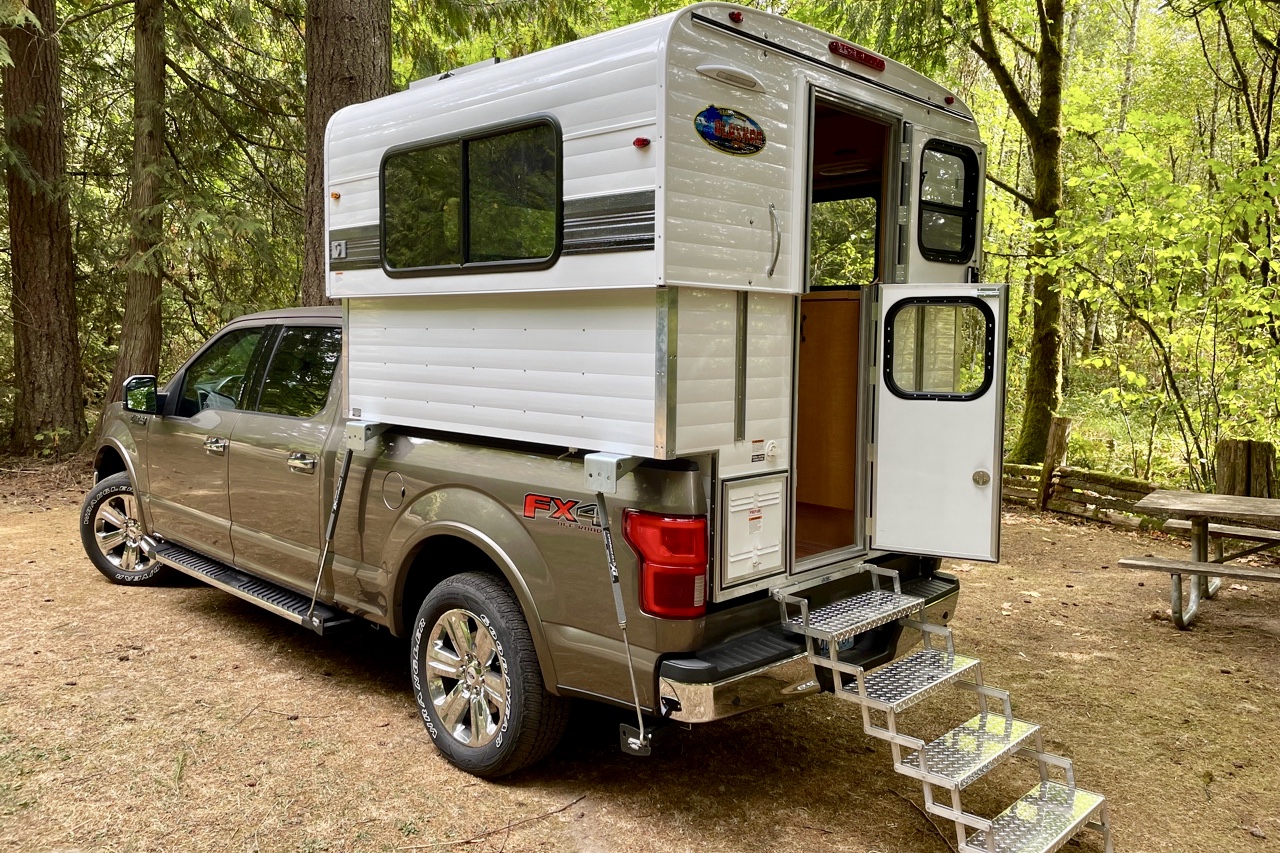 Like the original Alaskan campers built in the late 1950s, the Sportsman is framed entirely out of wood and wrapped with the same 3-inch aluminum break skin pattern used in the originals. Alaskan uses 3/4-inch and 1/2-inch, marine-grade ACX plywood in the construction of its campers. Strength and rigidity comes with the addition of the alder cabinets, which are glued and screwed into the wood frame, and with 2×6-inch and 2×4-inch studs, which are used to support the camper’s four lift jacks. This approach results in a camper that is both incredibly strong and long lasting. As a matter of fact, a good number of Alaskan’s built in the 1950s and 1960s are still in use today.

Unlike many truck campers being built today, you won’t see any modern, “Euro” design elements or residential “foo-foo” in an Alaskan. Instead, what you’ll find is a retro, leather and wood interior quite unlike any other truck camper being built today. Many have compared the warm and rustic interior of an Alaskan to an ocean-going yacht from the 1950s.

As one would expect for a 6-foot 6-inch floorplan, the amenities inside the Sportsman are pretty spartan. The jack knife sofa expands to a comfortable and spacious 80×44-inch, full-size bed large enough to sleep two adults. Due to the limited amount of floor space in the camper, there is no wet-bath, though the storage cabinet in the camper is large enough to store a porta-pottie for late night nature calls. Bryan considered adding an outdoor shower, but ultimately decided against it since so many outdoor enthusiasts enjoy using portable solar showers that are a fraction of the cost.

Yet the Sportsman is more than just a simple camper shell with a bed. It comes with a 15 gallon fresh water holding tank (with an optional 27 gallon tank available), a horizontal 20-pound propane tank with gauge, a Thetford two-burner cooktop, a stainless steel sink with a manual hand pump, a 12 volt Truma Weekender C44 refrigerator-freezer chest, and a Truma VarioHeat furnace. The camper also comes with a Zamp 170 watt solar power system, a group 31 AGM or lithium battery, a 10-speed MaxxAir Vent Fan, overhead storage, and blacked out window covers. Not bad for a minimalist truck camper.

“We wanted to design a basic, ‘cookie-cutter’ camper that is what it is. We are getting away from custom builds, so we didn’t want it to go too crazy where customers ask, ‘can you add this to it? Can you add that?’ If we do that, we’re back to engineering and head-scratching and that takes time. We wanted to build something like the Sportsman where there’s no questions asked, something more simple, something that’s back to the basics. If customers want to customize or modify it, they can do that themselves,” Bryan explained.

Will customers like this less-is-more, minimalist approach to truck camper design? Bryan is certain that they will as almost any full-size, short-bed truck can carry it. We think so, too.

“A lot of people don’t want all of the extra stuff. Alaskan’s have never been very frilly. We don’t have mirrors and valences, we don’t have all of that fancy stuff in our campers. We design our campers more like a sailboat anyway. We have so many customers who want less and less. We are just trying to go down that route,” he said.

To talk with Bryan and see the brand-new Alaskan Sportsman, visit the Alaskan Camper booth (P26) at the 2021 Overland Expo West in Flagstaff, Arizona, 24-27 September 2021. 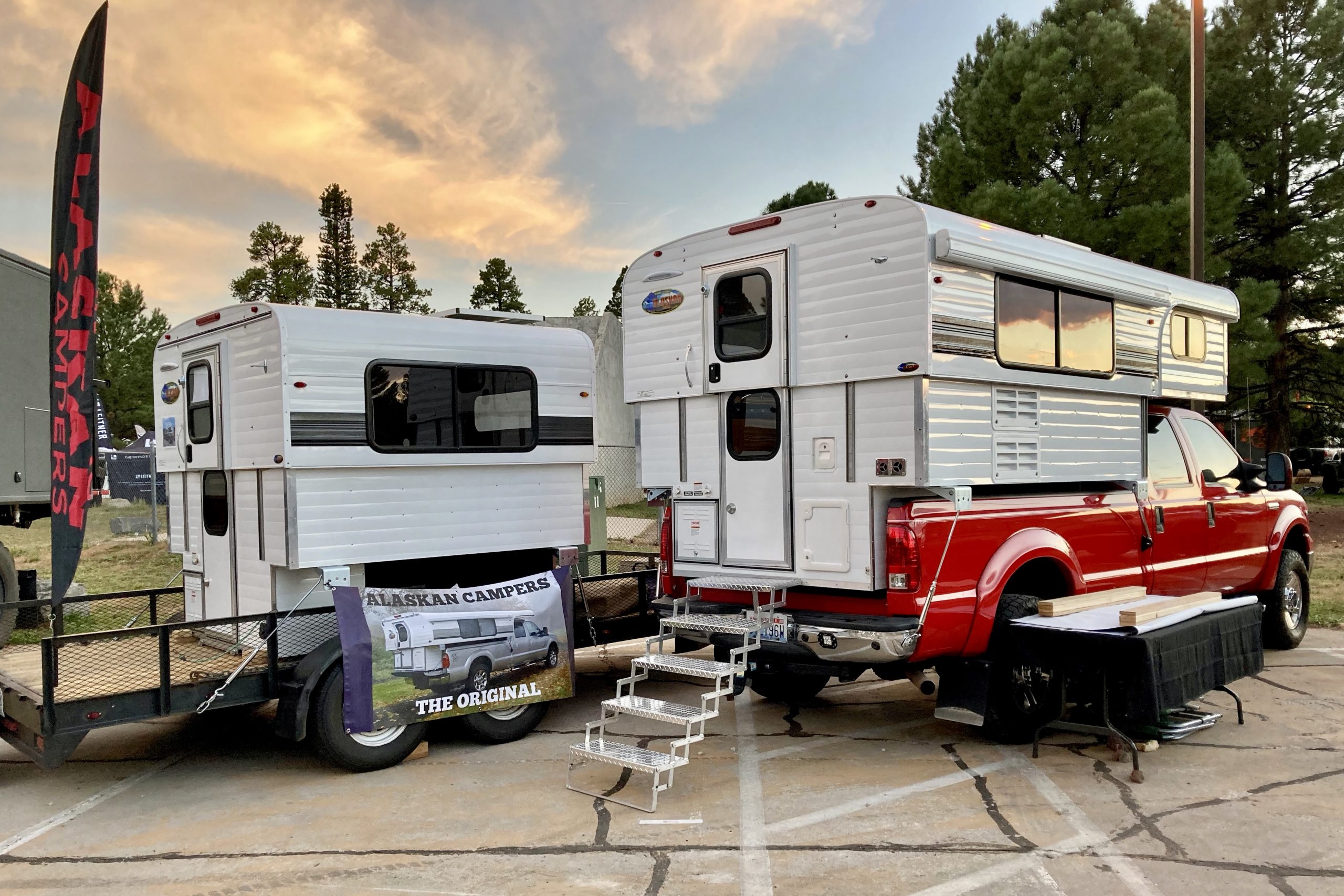 Field testing supports StableLoad suspension stabilizer as the most effective suspension upgrade available for vehicles under heavy load. “Quick Disconnect StableLoads have received great reviews, however we wanted to test its capabilities in comparison to [read more]