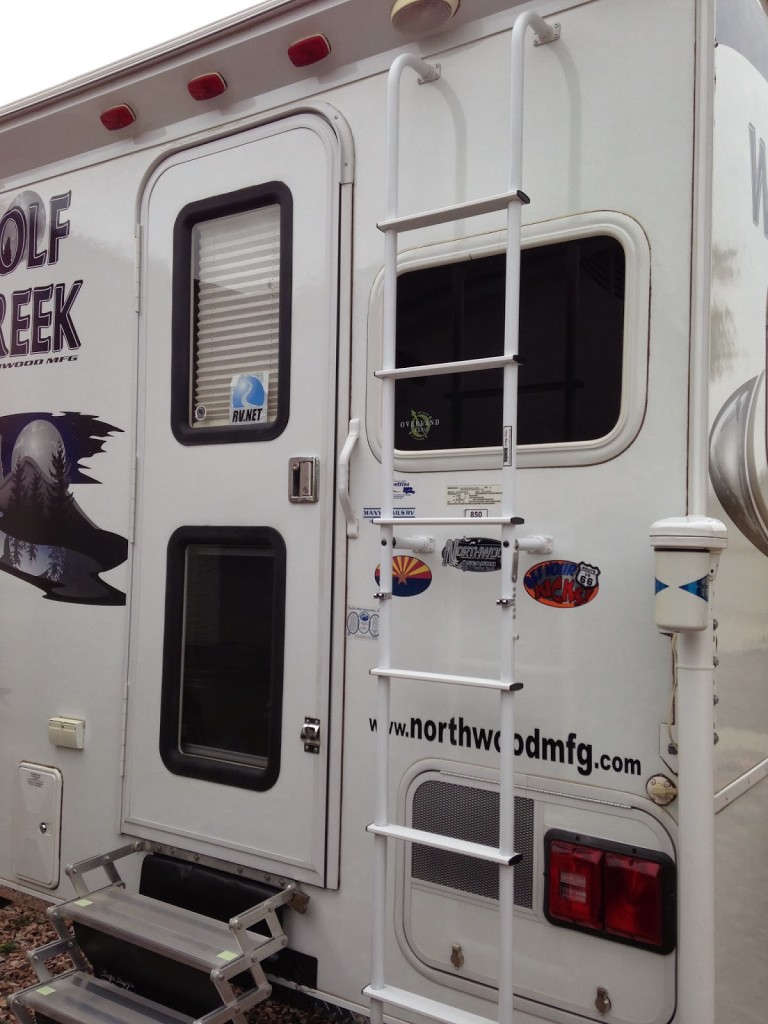 Have you ever been told something, and believed it, only to find out later what you were told wasn’t true? When I bought my Wolf Creek 850 truck camper back in September 2011 I was told by a Northwood Manufacturing rep that I couldn’t retrofit a rear ladder because blocking to support such a ladder didn’t exist in the 2011 models (at the time this was a special order item only). I was bummed when he told me this because a ladder not only gives you immediate access to the roof, but also gives you additional options for storing and mounting. Based on what I thought was definitive information, I dropped the idea and pursued other ways to upgrade and customize my camper.

The idea for retrofitting a rear ladder surfaced again last October when a fellow Wolf Creek 850 owner contacted me about his new to him 2012 camper. He asked me for my advice on several upgrades, one of which was the installation of a rear ladder. I told him what I was told, that sufficient blocking to support the weight of a 200 lb person didn’t exist in the 2012 and earlier models unless it was special ordered. He responded by showing me a blueprint for the 2012 models which clearly showed that ladder blocking existed. A revision on the blueprint he received showed that the upper blocking span for the ladder was lowered about 1/2 inch. It occurred to me that you can’t lower something that doesn’t already exist on previous prints, so out of curiosity I ordered the blueprints for my camper which was built in March 2011, the last run for the 2011 models.

To my amazement, the blueprint I received from Northwood Manufacturing, which was dated, February 22, 2011, clearly showed ladder blocking for all Wolf Creek 850 campers. According to the blueprint, it appears that the blocking was added in late February in preparation for the March builds at the factory. The contradiction between what the Northwood rep told me and what their blueprints showed had me stumped. In an effort to solve this little mystery once and for all, I decided to invest a little money in a stud finder that could locate both wood and metal studs. A quick scan with this new hand-held device confirmed the location of aluminum blocking where the blueprints said that they would be. NICE! Mystery solved!

Armed with this new information, I ordered a factory ladder from a local dealer. Yes, going this route is more expensive, but I wanted to ensure that the distance between the ladder’s mounting brackets matched the distance of the camper’s ladder blocking. After receiving the ladder, I checked and double checked the measurements before doing any drilling. Now if you’re like me, drilling into your RV always brings a little trepidation. There’s always the chance that you’ll get things wrong and be left with a small hole in your RV which will require some kind of repair to fix. After confirming my measurements a third and fourth time, I anxiously broke out my cordless Ryobi and drilled my first hole. As you can see in the picture below, and to my great relief, the drill bit hit what I was hoping for–a 1.5 x 3/4 inch horizontal aluminum cross member or block.

Once I confirmed where the blocking was located, the rest of the installation was pretty simple. The hardest part was marking the holes for drilling. Having an extra set of hands to hold the ladder while marking the holes is the best, but I didn’t have that luxury. Because of this I marked and drilled the mounting holes for the middle mounts first as they were the closest and easiest for me to reach. Once the middle brackets were installed, drilling and mounting the top brackets was a snap. In case anyone is curious, I used #9, 3/4-inch-long, self-tapping metal screws to install the brackets.

Unfortunately, the two bottom brackets didn’t sit flush on the rear wall due to a horizontal piece of trim which was in the way, so I had to do a little improvising. I thought of various ways of creating a flush mount then remembered I had several leftover pieces of thick rubber anti-skid strips. A couple 1 x 1 inch pieces of this rubber below the trim piece worked great to provide the brackets with a solid and flush mounting surface. As you can see in the final pictures, the installation looks great and is rock solid. Oh, one more thing. To help get up on the roof, I’ll be installing a grab handle on the edge of the roof.

After solving the blocking mystery, this turned out to be a fun and relatively easy mod. I would’ve preferred having this ladder a year or two ago when I first needed it, but, hey, better late than never. Now I can get on the roof during trips to conduct emergency repairs and can use the ladder for storing things like chairs and bikes and mounting things like flagpoles and wind turbines. I like having options and having an RV ladder gives me plenty.

Like Loading...
About Mello Mike 729 Articles
Mello Mike is an Arizona native, author, and the founder of Truck Camper Adventure. He's been RV'ing since 2002, is a certified RVIA Level 1 RV Technician, and has restored several Airstream travel trailers. A communications expert and licensed ham radio operator, he retired from the U.S. Navy in 2004 as a CWO3 after 24 years, worked in project management, and now runs Truck Camper Adventure full-time. He also does some RV consulting, repairs, and inspections on the side. He currently rolls in a 4WD Ram 3500 outfitted with a SherpTek truck bed with a Bundutec Roadrunner mounted on top. - KK7TCA
Website Instagram YouTube

Review of the Easy Hitch Step for Truck Campers

The entry step is one of the most important accessories you can get for your truck camper. Without a safe and effective way to get in and out of your camper, your $40,000 camper is [read more]